Thania Petersen’s current work began with a search to uncover her Cape Malay heritage and in doing so, to bring to light a vital aspect of her identity. This search was initiated by her father, who many years back traced her family’s lineage back to Tuan Guru – a prince from Tidore who became the first political prisoner to be held on Robben Island in the late 1700s, and is now regarded as the father of Islam in South Africa. Thania continued her investigation at the Indonesian Consulate in Cape Town and in response to her findings, created the body of work, I Am Royal. As the subject of these photographs she places herself directly within the context of her own history, staking her claim to a lineage.

Through her deeply personal and explorative work, Thania hopes to be a representative for unheard voices – and not just her own. In this Creative Women interview she talks about her belief that heritage and identity are interconnected and how she used art to ceremoniously reclaim what is hers.

What sort of environment did you grow up in?

My childhood environment is difﬁcult to describe. I grew up largely in my grandparents’ home which is a typically middle class Muslim Cape Malay home; lovely and warm with lots of people around and lots of food and celebration. When I was with my parents they were not at all typical in any way – they were young, free and feisty! A recipe for trouble! They were probably typically the typical bohemian activists of the eighties with no regard for consequence. They lived their lives spirited and fearless, which lead to my father being exiled from the country when I was 4 years old. I remember that with them there was always lots of music, art, friends and a pet monkey! So in a sense we can say that my environment was the best balance of two opposites. After my dad’s exile I spent lots of time in the U.K. as well, which added a whole new dimension to my life.

How does the work you’re creating now respond or react to this environment?

My work so far has been very personal, it is rooted in where I come from as that is my understanding of who I am.

Tell us a bit about your journey to becoming an artist.

That’s difﬁcult. I guess I ﬁrst need to decide what deﬁnes an artist and then see if I’m worth the title. I have always done art – I did it at school, I went on to study it at university and now I’m doing it full time. In between I worked as a photographer and opened a bookshop/coffee shop/junkshop, only to discover that I’m a really lousy business woman! And I am a full time mum of 3 boys! I think artists are born artists regardless of whether or not they make a living out of it. It’s not something you become, it’s something you innately are.

What sparked your desire to conduct an in-depth exploration of your Cape Malay heritage?

A serious yearning to be recognized for who we are. Not to be looked upon as though we are less because of teachings that we were all just slaves they probably lined up on some tropical beach in South East Asia, put onto some Dutch boat and brought over here to build a few houses and live in some Dutch slave quarters! It is not true! There is much more to us than koeksisters and bobotie. We have an amazing history with men who were brought here ﬁghting! I think they should be celebrated. They were proud, and my project speaks of us as a people who have had everything taken away from them except that very pride and dignity.

You speak of identity as something that can be “searched for”, implying that it can also be “found”. How did you go about this search, and what did you ﬁnd?

I did not have to look too far as my father went on the search before me and had traced our lineage back to Tuan Guru, the ﬁrst political prisoner held on Robben Island in the late 1700s. I went further and spent some time at the Indonesian Consulate in Cape Town where I discovered much more about him, including that he was in fact a Prince. He posed a huge threat to the Dutch colonial rule in Indonesia at the time and was therefore exiled to South Africa. He also wrote several copies of the Quraan from his head while imprisoned and once he was released he moved to Bo-Kaap where he opened the ﬁrst mosque and school on Dorp Street.

If identity is wrapped up in heritage, it means that we suffer a great loss if we don’t know the truth about our own histories. You’ve said that “The stronger our sense of identity, the less susceptible we are to shit, mass production, mass identity, mass consumerism. When you don’t know what you are, you’re not sure, you’re always trying to ﬁt in; you let people piss on you, because they just seem so much stronger and so much surer.” You’ve done something to combat this in your personal capacity, but how do you think we can tackle this on a broader scale?

I think it’s a huge task. The way that history is taught in our schools should be reassessed as I think it may be biased and probably tends to conveniently leave things out. I think that people should stop being put into cultural groups which promotes mass identity like we are all “Cape coloureds”. I hate that term! So whether you are Malaysian, Indonesian, Khoi or Madagascan, it doesn’t really matter, you are all deﬁned with one label! It strips you of your whole history as I don’t think Khoi people came here from Indonesia! But it’s all the same under that title. No respect given to different cultural groups, where they are from and ultimately, who they are.

Recently, two sets of your work were shown as the third instalment of Skattie Celebrates. In the ﬁrst photo series, I Am Royal, you map the movements and transformations of the Cape Malay people over centuries. How have these portraits helped you to stake your claim to a lineage?

I tell you the process has in fact changed me. It was really an act of afﬁrmation. Almost ceremoniously taking back what is mine. A history, a legacy, a sense of self! I now feel part of my own history.

Another series, Barbie & Me, speaks about the inner conﬂict Muslim people face living in a secular environment. Could you tell us more about this?

Barbie & Me is about my inner turmoil. Being a Muslim and having lived within a secular society my whole life, I face certain challenges other people take for granted which leaves me with a constant feeling of guilt. When I look at where it began I traced it back to age four when the ﬁrst 3 things I owned and looked after was my prayer book, my prayer bag and a Barbie doll. I would go to Muslim school where I was encouraged to be modest in my behaviour and my dress, but when I returned home I played with Barbie who speaks of the complete opposite, and already I was torn between what I should be and what I wanted to be. The desire to be Barbie doesn’t go away, it changes but in essence the battle remains the same. I photographed my belongings as a child and then photographed my daily belongings in my handbag as an adult. I then photographed myself through the 3 stages of my life – childhood, adulthood and motherhood – to reveal that the constant struggles we face throughout our lives inevitably starts again with our children.

As the subject of all of your photographs, why is it important for you to – quite literally – insert yourself into your work?

I think I am often in a state of protest in my photographs. I want to be seen as I am not heard otherwise. I think I am representational for unheard voices, not just my own. At least I hope so.

In your experience, do you think that there are different expectations placed on the role of male and female artists and the subject matter they explore?

No, I see no difference. I’ve never even thought about art in reference to gender to be completely honest.

What are you currently working on, or working towards?

I am very excited about my new project but the idea needs to be reﬁned. I don’t feel conﬁdent enough to talk about it yet. I ﬁnd the more I work on something the more it evolves and often ends up being something completely different. So as excited as I am, I have to control my urge to talk about it for now.

Ultimately, what would you like to achieve through your art?

I would like my work to inform and inspire people to ask questions about themselves and the people around them.

Thania’s solo exhibitionI Am Royal is now showing at the AVA Gallery in Cape Town where she is hosting a walkabout on Friday, 21 August at 12:30pm.

Photographs of Thania by Anke Loots. 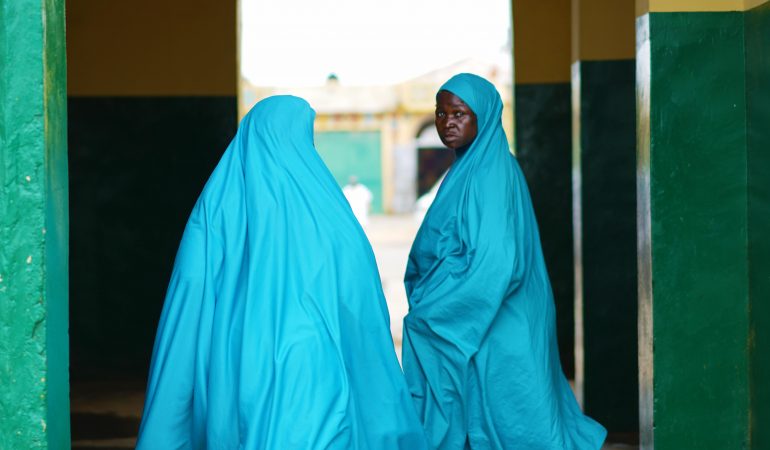 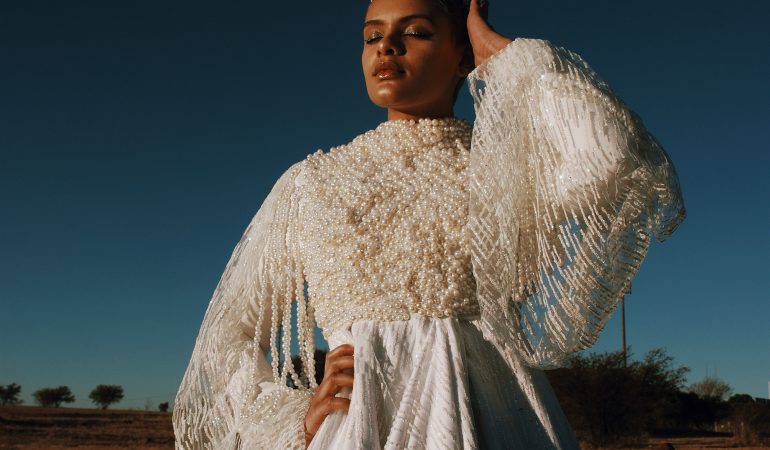 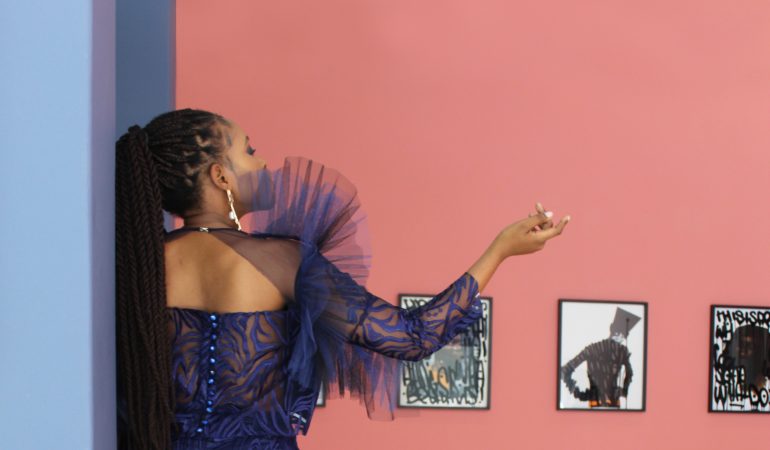 In Conversation: Carin Bester on ‘She had a name’ Durational Performance & Activism Through Art34 Total Shares

Creative Women Month Is Back: Bigger & Bolder Than Before5 Total Shares

10and5 Presents: ‘What Does Success Look Like for Women?’ Webinar3 Total Shares