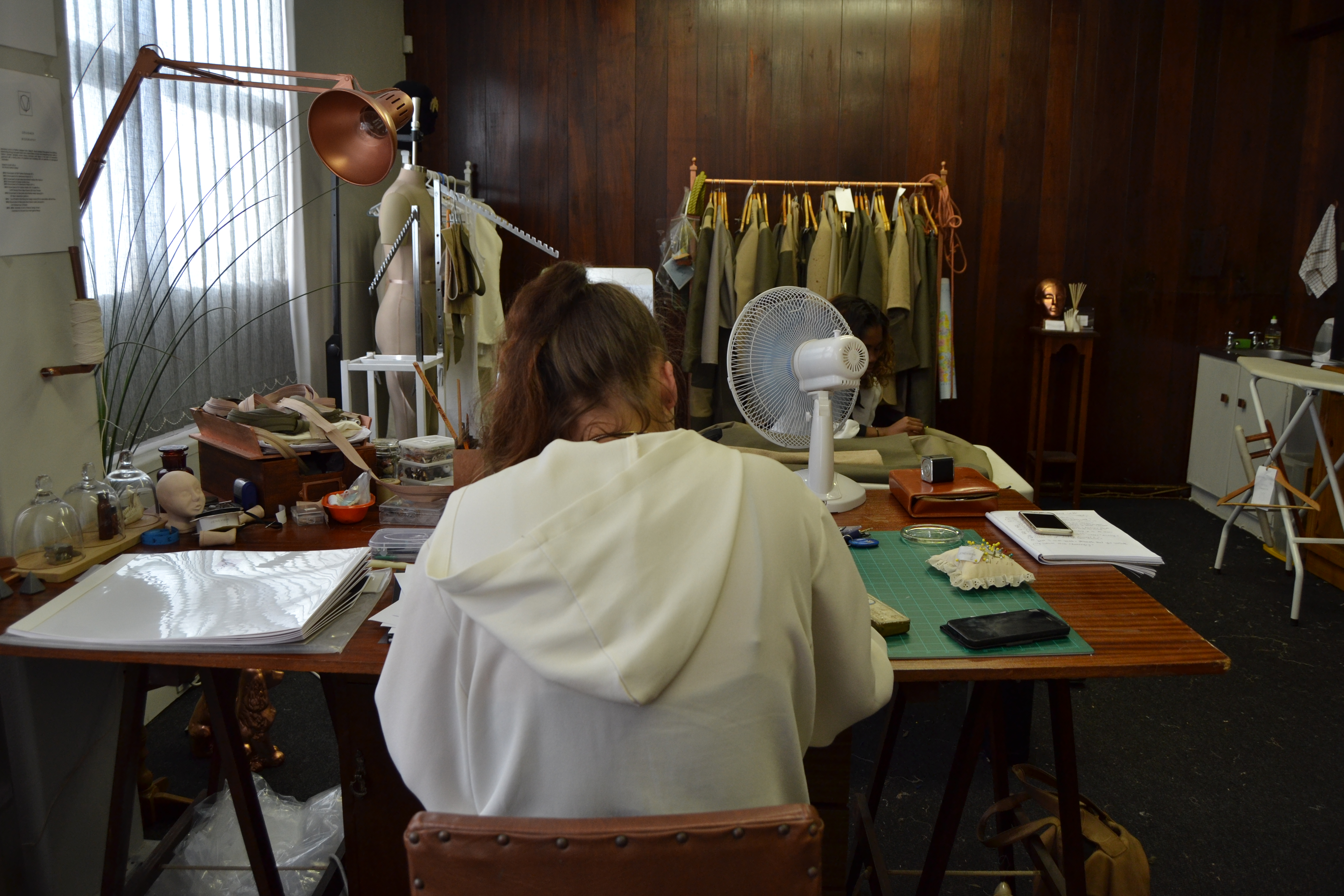 Posted at 15:26h in Fashion by Gabriella Pinto
0 Likes

In a studio at the end of a long white passage, far removed from the ruckus of multiple camera flashes and fanfare to be found at SA Menswear Week, is Jenevieve Lyons, standing beside her chair contemplating her latest designs. Bronze ornaments are found on the floor, papers and zips on her desk, and rulers in a cylinder behind the door. Interrupting the quiet is the constant whiz of fans keeping her cool and muffled sounds from the street below. She’s calm for a designer about to reveal new work and fastidiously walks about finalising last minute details. For this runway collection, Jenevieve was drawn to the beauty of ‘freckles on a milk face’. It was after watching the film Moshanyana, which explores albinism, that the conceptual premise for Macula revealed itself and she began to view freckles as an imperfection to celebrate rather than conceal.

Macula means spot or freckle and is the name of your runway collection. Tell us about the concept and inspiration behind it.

It pays a lot of homage to our people and it’s become quite an emotional collection, which I didn’t expect. This one has been closer to my heart because I’ve met my inspiration in person. It started with a film I saw called Moshanyana. It’s basically this albino boy with freckles who acts in this film. The boy captured my inspiration – it kept on going around my head. I got really intrigued by the freckles and the individuality of this person and what it means to be the ‘other’. It’s there to showcase the juxtaposition of beauty and the obtrusiveness of it. It mostly takes inspiration from freckles on a milk face. Taking it further, the collection has a lot of military and army references, which happened organically, and that hints at the shield that these individuals carry in society. You know, albinos are at such risk in Africa right now and are even mocked and killed for their individuality. I want to display their beauty in it’s natural form. Then there’s travelling elements with accessories like maps and bags. It’s about a travel journey, this person is trying to find their way in society.

Most of your collections use materials in muted, earthy tones. What fabrics have you used this time and why?

I’ve used wool as well as a really traditional felt that you use for tailoring, because I enjoy tailoring. I wanted to take a lot of traditional elements of tailoring and use it in a new way – conceptual minimalism – that fits in with my aesthetic. I found this fabric works the best and it’s cost effective. I’ve even made trousers because it’s quite thick. I wanted the collection to be layered and heavy. We painted freckles onto some of the wool as well so if you don’t have freckles, you’re not excluded.

Why is it important for you to showcase your collection at SA Menswear Fashion Week?

I think it’s very important for relevance, because you have to keep reinterpreting your own aesthetic, as well as growing as a designer. I also think it’s an opportunity to portray Africa and our aesthetic on a global stage because even though SA Menswear Week is new, it’s there to push the boundaries. I want the work I show to portray Africa in a different way, not just stereotypical prints. It’s also exciting to grow the menswear industry – it’s very new and young.

Speaking of which, how do you feel your label has grown since last year’s runway collection?

It’s been great. 2015 was a year of growth and getting a lot of client’s interest internationally, as well as growing as a designer both in aesthetic and expanding the means of what I can do. I always aim to reinterpret things and push myself further with every collection. I try to design outside my comfort zone. It’s about growing personally and expanding the brand.

A considerable amount of planning and effort goes into runway shows. How does the process work?

Before the time you work with a producer and you communicate with them, because it’s a very conceptual collection and you want to make sure the people who are watching understand and feel the story. As a brand, I want to create visual parables on the runway, so I told Deon Redman – who is great at bringing a show to life – my concept about the freckles, and said I wanted to get as many natural models with freckles, and if they don’t have, then I want natural freckles painted on them. Usually, when I choose a model, it’s a small European size because it’s more readable on the global stage. Then you scope your models, your fitting comes and you see who looks best in what garment. You then select the running order and hair and make-up starts on the rehearsal day, and then it’s the show!

What’s the most nerve-wracking part?

I think it’s the fittings and the part when the collection becomes a physical reality. That’s when you have to make sure that you’re getting it right. Just before the show there’s more excitement and anticipation.

I’m looking forward to portraying Africa very strongly and paying homage to the beautiful people in it.

Do you have any mentors, who guide you along the way?

I interned with Suzaan Heyns, and I also worked with her two years back and that gave me a lot insight. I aim to work with all sorts of people in creative fields, like photographers, artists, and I collaborate with stylists just to get another approach and keep growing in it.

What’s the main difference between a ready-made and runway collection?

I think a very strong reason for my runway collections is to depict a story and give people a feeling and showcase and bring insight to something that is happening in the world. It’s a beautiful form that should be appreciated. The ready-to-wear collection is more muted but acts like a bloodline keeping the story going..

On the runway it’s easier to make a statement and get it across because you’re selling your story, brand, aesthetic and vision. It’s important to keep track, when you’re working with a client, to make sure that you’re still telling the story, that they know what’s going on and where the collection came from etc. We do a lot of custom making for my clients which is great because then you can build a story individually for them. It’s important to control that, otherwise it becomes diluted into just clothing instead of an actual brand. That’s why there are so few brands.

If you have to encapsulate your brand in a sentence, what would you say?

I would say it’s aesthetically devised apparel to showcase visual parables on the runway, and it’s focused on the concept and aesthetic of conceptual minimalism.

Why the ‘devised’ and not ‘designed’?

Because devised is more to do with the execution, it doesn’t just start with the design process, it comes from the concept. You’re devising the popular culture and the zeitgeist around you.

How long did it take to complete Macula?

Not very long, like two months. The concept started about four months ago. The concept takes the longest to understand because it’s such an organic process but the actual execution was about two months.

Are there any trends that you’ve noticed in the local industry?

I think menswear is growing a lot, also multi-wear. I call it multi-wear because unisex is just used so much. Definitely woman wearing menswear and men wearing womanswear – that’s a big local trend. There’s also normcore and minimalism which is still going as well as street culture.

What were some of the challenges with this collection?

I think some of the challenges, which is something all designers face in South Africa, were finding good quality fabric and good quality production, that’s always a big challenge. You hire someone because you want to create employment but maybe they don’t have the skills to create what you want, and you have to have resilience to change what you had in mind and find something new. It’s very important to keep pushing and get it done. I sew all my outfits (all the outer garments and coats) because that’s what I love doing. It’s also about knowing that I have control over the outcome.

What are you looking forward to at this year’s SA Menswear Fashion Week?

I’m looking forward to portraying Africa very strongly and paying homage to the beautiful people in it. Like I said, it became quite emotional because I shot my campaign on Saturday with an albino man that I found off the street. Meeting him in person made me realise the hardships they have which you don’t see from the outside. It was very hard-hitting for me and realising that I have an important stance with this collection and can showcase them in a beautiful light and bring attention to it. We are showcasing an AV video before our show, which is going to give the feeling of collection and we want to build awareness for a bigger cause.

Do you plan to showcase the collection elsewhere, and what other plans do you have or 2016?

We are showcasing it at a charity show called ‘Don’t Walk’, that’s still pending but it is international. I’d like to go into physical retail. It’s very tough in South Africa, especially when you don’t have the income to produce and hang stuff on consignment and pay rail fee. So, it’s finding out how you can get your clothing to the consumer with the least amount of risk. We’re aiming at building our own online store and have recently redone our website. We’re also selling in the UK and going into physical retail there because the market is more open to our design at the moment. The majority of my clients are South African though. You want to keep things at home and not too far away.