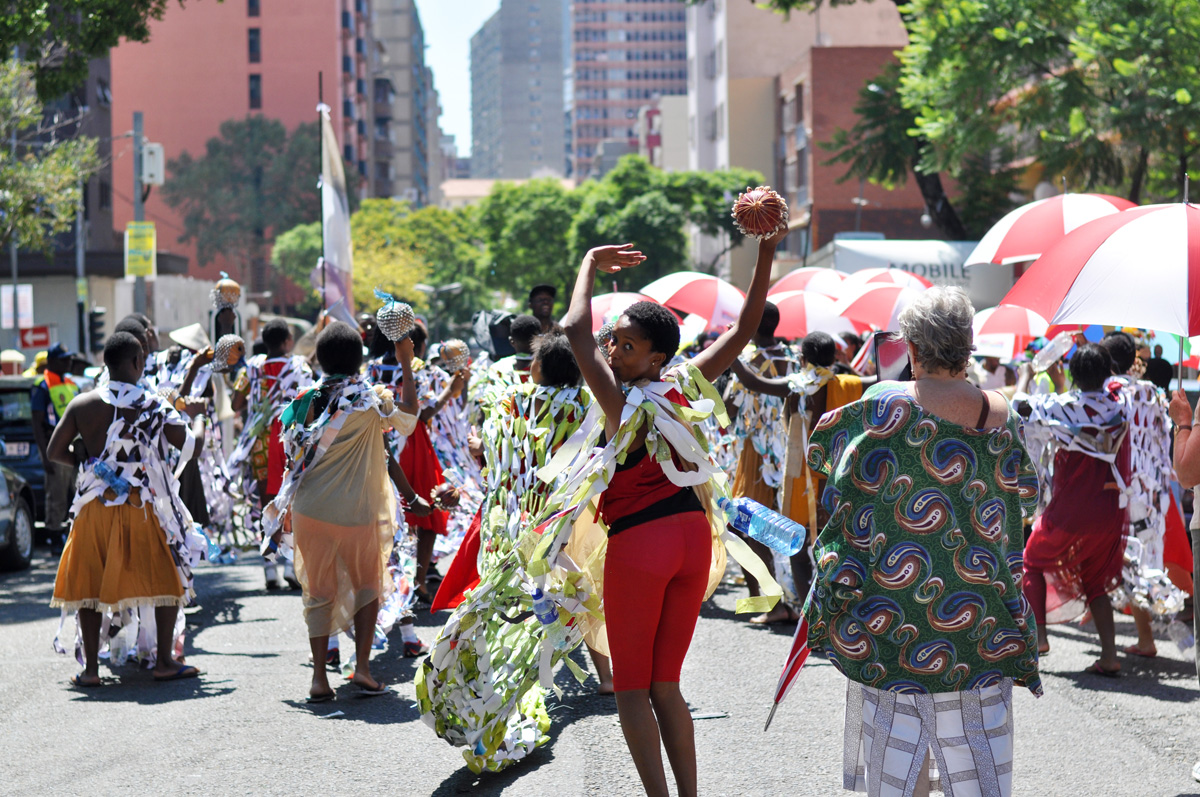 If you found yourself in Hillbrow this past Saturday, you would have laid eyes upon a scene that was entirely unique. Crowds comprising young and old, dressed up in lavish costumes, faces adorned in paint and flamboyant headgear, all moved in unison as voices hailed out through loudspeakers parting traffic and grabbing attention. Hey Hillbrow Let’s Dlala! was a day of performance and procession, culminating in an afternoon filled with art and storytelling. The aim—to bring art into the public eye, inviting all in the area to watch, appreciate and participate.

The combined effort of various artistic organisations and individuals including Joburg Ballet, Ekhaya Neighbourhood, The House Group, One Love Skate Expo and more, the one day festival kicked off at the Hillbrow Theatre before taking to the streets, travelling along Kapteijn Street, up Kotze and into the bustling Highpoint Centre where public shows of singing, dancing, music and all round creative performance filled the space. Here, everyday city commuters became audience members as art took hold of the public domain, working with it, in it, for it, to create a prevalent and integrated artistic space.

One of the core members helping orchestrate the event, performance artist Anthea Moys explains that with public art of this nature, the audience is as much a part of the works as the performers themselves. “When you bring art into public spaces, people see it and go, ‘What? How? What is that? I’m sure I could do that as well’ and they become curious and maybe even get involved, potentially learning a new skill or form of art,” she says. “You are not just on the side-lines watching things being done for you and then clapping afterwards, you are part of the whole artwork. The artwork is finished by the people that attend and engage and so you are empowering yourself and those who are making the festival by coming through.”

In the early afternoon, after a series of performances had been carried out in front of the Highpoint Superspar, the procession made its way back to the Hillbrow Theatre where stalls offered up crafts, food and drinks, and storytelling booths captured the everyday narratives of the collective community. Music came in the form of onsite Hillbrow Radio presenters, and a small skate park with a handful of ramps and rails saw budding skaters hone their skills.

Opposite this, a wall freshly coated in white paint took on new life as street artist Wesley Pepper painted the many characters and faces of the community in a way he describes as being “honest art”. When conversations around public art take place, graffiti and street art inevitably enter the topic, and through painting the everyday people of Hillbrow on a canvas for everyone to view and engage with, Wesley explains that conversations are sparked and barriers are broken down.

“This whole thing is in the heart of Hillbrow which is this kind of unforgiving landscape of crime, politics, drugs, all of that,” he says between brushstrokes. “I’m taking what’s in my head, what I see around me, and I’m putting it on a wall. That’s already breaking a taboo, because so much art exists in galleries that are largely inaccessible to the public here. Besides seeing a bit of themselves in the piece, the people in this area can now see the process of art taking place in front of them and even talk to the artist and ask questions about it if they like. I even had a cop car pull over here earlier and just watch me paint. If that’s not the breaking down of some sort of barrier between street artist and law enforcement then I don’t know,” he says laughing.

Throughout the noise, colour and general celebration paying tribute to the Hillbrow community however, there was a quieter tribute taking place – the honouring of the life of one of Johannesburg’s most prominent and passionate public art activists, Lesley Perkes. Having passed away exactly one year ago, Lesley was an artist well known for her love of the city and its various artistic enclaves and communities. Her dream was to see Hillbrow have its own annual summer festival collating and platforming all of the community’s artists and residents.

“Gerard Bester from the Outreach Foundation and I were good friends with Lesley,” explains Anthea. “We wanted to bring her idea to life and so we teamed up with a few others and decided to just do it without funding, to sort of kick-start something and get funding for next year and the year after, and so everyone here is doing this for free, which is so incredible and a great tribute to her and her idea.”

Hillbrow may be largely known for its socio-economic disparities and resultant crime and drugs, and on the day this was still apparent, but for a good few hours, the streets were emptied out of traffic, taking the shape of stages, runways, dance floors, and playgrounds. The everyday malaise of labour and long commute was disrupted, showcasing a community in conversation with itself, speaking through art. Though South African public art is still in its fledgling stages, innovative and engaging events like this do well to show the potential for art that is accessible, reaching from the gallery and theatre to the streets and everywhere in between. Considering the festival will take place on an annual basis, Hey Hillbrow Let’s Dlala! looks set to be one of the trailblazers in Johannesburg’s, and even SA’s, move towards a more inclusive public art.

Find out more about Hey Hillbrow! on Facebook and view our photos of the day below.