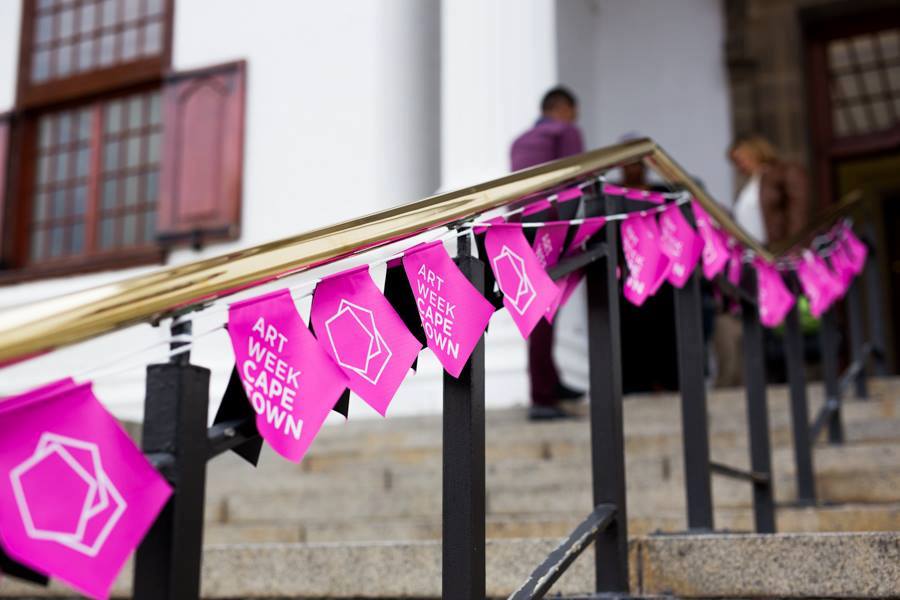 Finding yourself in Cape Town and feeling overwhelmed as to which exhibitions you should see when, why, and with whom? Fear not, we’ve perused the full Art Week Cape Town programme (as well as ticked ‘going’ to all the subsidiary Facebook events) and have compiled this list of must-see shows and creative events for this week of artistic indulgence from Tuesday 16 to Sunday 21 February.

This site-specific programme of live art and installation pieces negotiates regulated factory life, clothing and the politics of gentrification. The interdisciplinary project brings together the work of sound and performance artists to create an experimental and immersive experience that encourages audiences to interrogate the chosen site outside of its everyday use. Read our interview with the curators here.

The Design Indaba Emerging Creatives exhibition presents the work of 40 up and coming designers who will partake in a year-long mentorship programme where they will gain valuable industry experience and exposure. Visit the event page for more.

Watershed in the V&A Waterfront

EXILE: a solo show of paintings and light works by Michael Linders

Attempting to understand one’s own artistic practice is a process which is both frustrating, and as an investigation into an ever evolving practice, also offers no closure. However, Michael Linders felt the need to approach this self evaluation by taking stock of a particular period in his life during the late 80s when he and his family emigrated to South Africa, and in doing so, examines the birth of his visual language. More on Facebook.

TAF is an art fair focusing on emerging artists from Africa and the Diaspora. Be sure to check out our very own Travel group exhibition taking place at the fair.

The Cape Town Art Fair showcases a diversity of work, bringing contemporary art from Africa to the world, and the world to Cape Town. There’s also a programme of talks, broken up into panels, which will aim to reconsider Africa’s place in the global conversation around contemporary art production.

Once you’ve made the art rounds, head to the official THAT ART FAIR celebration in the atrium of The Palms Décor and Lifestyle Centre. There you can hear the Cape Town debut of afrohouse collective, Batuk, who’ll be playing alongside the groove-masters John Wizards, Felix Laband, Original Swimming Party, Umlilo, and DJs from Skattie.

Enjoy extended Saturday opening hours and special events at galleries and institutions in the City Bowl. A few of our top picks include:

Q&A Session at the AVA Gallery

SKUGGAÞRÆÐIR by Lucy Turpin at Commune.1

As part of Lucy Turpin’s ongoing exploration of drawing practices she will create a large-scale wall drawing in the gallery that is only viewable for 2 hours on the night of the event, after which it will degrade and once again become invisible.

Studio: Celebrating the Lives and Work of South African Artists is an exhibition comprised of over 100 artists, both contemporary and historical, bringing the notion of the artist’s workspace as a centre of creativity into the very heart of the art museum.

Free admission for this event only

Since 2000, the Maboneng Township Arts Experience has been transforming township homes into galleries, bringing together, empowering and inspiring communities and artists.