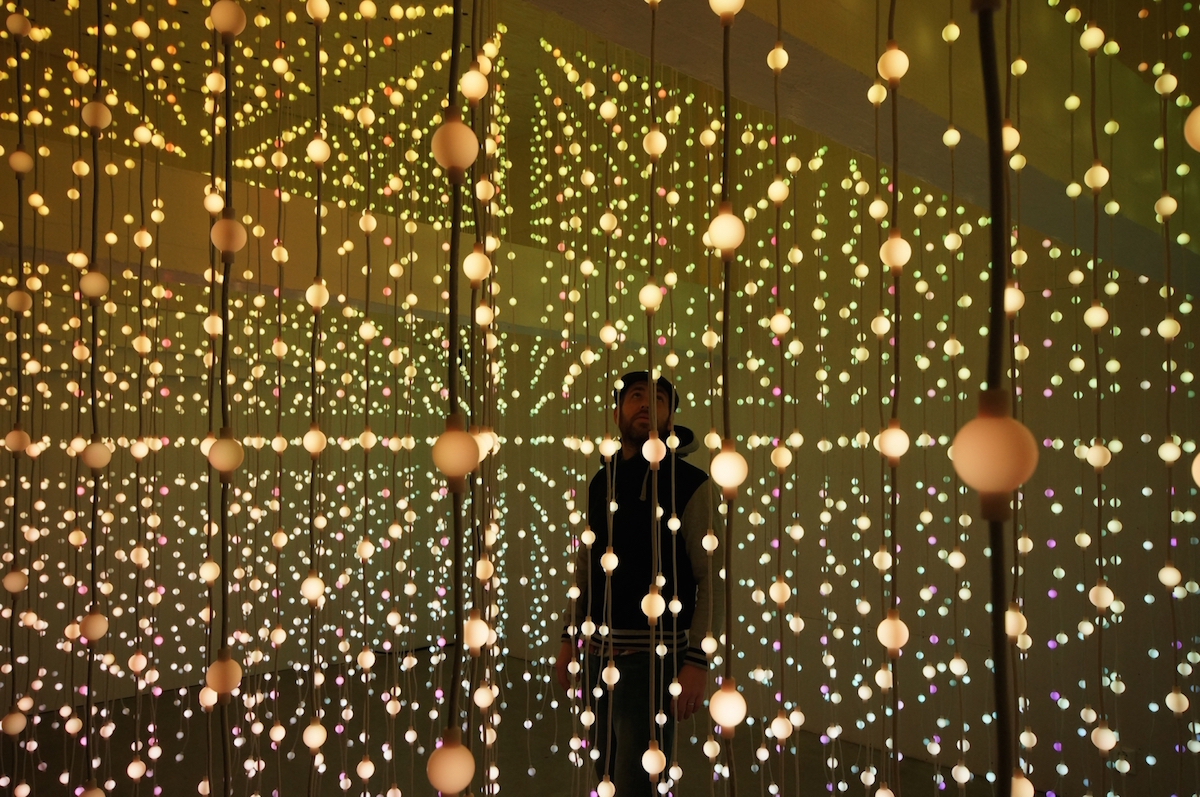 During the final day of Design Indaba we witnessed  the breathtaking work of LA based world designer, Alex Mcdowell, who spoke about how augmented reality is shaping the future of the storytelling. Spanish designer Jaime Payon revealed that inspiration is never far away and LAVA Lab championed millennials affirming how they’re the most innovative force and drivers of structural change. To end off an inspirational three days, Imogen Heap showed us how she’s revolutionizing the electronic music industry and sculpting sound with her Mi.Mu gloves by performing her latest track, ‘Tiny Human’. We left in awe and inspired to see how creatives are using design to tackle global issues and prompting people to see the world differently.

Two of the team from LAVA Lab in the Netherlands gave a dynamic presentation about innovation, taking risks and understanding the biggest demographic on the planet: millennials. Cecilia Martin, who describes herself as risk taker and Klasien van de Zandschulp, a self-professed nerd, explained how the agency views design as a way to connect people and as such, travel around the world working in different contexts and spaces.

In Moscow they jumped on board creating the branding for the first ever design museum. The identity they created for the museum derived from the intricate patterns on cut glass vases that are found in every home in Russia. Using the geometric shapes they created a flexible contemporary identity with a rich social and cultural history. Following on from this, they decided that instead of creating a museum that people would have to travel to, they’d take the museum to the people and house it inside a bus. On the opposite end of the continent they embarked on another mobile design initiative during Beijing Design Week and pimped a tuk-tuk into a mobile brand shop that they travelled around in creating logos for any business that wanted one.

Innovators see the future in the present

At the centre of LAVA Lab’s work is an innate understanding of and enthusiasm about the millennial generation who use phones as remote controls for their lives. Designing for this generation is about creating tools to enable them to be masters of their own lives. Cecilia describes them as “the Da Vincis of today, driving a new renaissance”. To connect with this tech-savvy generation requires creating experiences that bridge the divide between offline and online.

Using design to create unexpected social encounters is the golden ticket the LAVA Lab you to engage young audiences. At the Hermitage Museum in Amsterdam the agency was tasked with attracting a young crowd to visit the collection of Golden Age of Dutch Masters paintings. Through researching the stories depicted in the paintings, a complex interwoven narrative emerged with distinct characters and scenarios The team developed this into a social network app with profiles for the figures in the paintings and information about the artworks pushed to peoples’ phones. Visitors get friend requests from people in the paintings and the experience becomes interactive, informative and completely customisable.

During a tea break we caught up with Cecilia and Klasien very briefly to speak a little more about working with millennials:

You spoke about designing for millennials in your talk, can you tell us about working with this generation in your team?

Cecilia: We work with a huge team of millennials in our department. We test things with them and they’re leading us in that way. Millennials really believe in their opinions. They have really strong opinions and are not afraid to challenge authority. This can create a clash, but I think it’s a good thing; I like to see where their idea will take me. I also know that I’m not in control just because I have experience. I give them the means so that they can do it themselves.

If there was one thing you could take away from the millennial generation what would it be?

Cecilia: I think millennials are the driving force of innovation. They should not be seen as a difficult generation. I think they’re a highly inspired generation and they are changing the world we live in.

Klasien: What’s even more exciting is the next generation who are growing up completely digital with coding as another language. This is going to go so fast.

How synonymous is tech and the millennial mindset?

Cecilia: For older generations to really adapt to new technology can be very scary. But if you don’t adapt and loose that fear of not knowing where you’re going you’re going to get left behind. You have to not think about design as an end product, but as designing tools for people to take further.

It was a simple disruptive moment that put Alex McDowell on the path to where he is now – the Creative Director of “world building” studio 5D. Here, Alex’s current practice mixes design, technology and storytelling, the latter being a central theme of his life and career.

To go back to the simple disruptive moment that changed it all; while Alex was at art school in London he held the role of social secretary, which meant he was in charge of booking bands. One day a guy names Glen walked in off the street and asked Alex if he wanted a band to play a free show the following night. Of course he said yes, and so the Sex Pistols had their first headlining gig. “The Pistols played, and my art changed,” Alex told us. At his graduate exhibition one of his drawings was ripped down by a lecturer. “Mostly in reaction to the other pieces of art that he couldn’t destroy.”

Alex left collage and continued working with the Sex Pistols (and as an interesting aside, during this time also wound up designing for the first couple of issues of i-D magazine). When Glen Matlock left the Pistols to tour with Iggy Pop, Alex followed, and was invited to design a campaign and create 3 music videos for Iggy. This is how he moved from the world of graphics into moving images, becoming involved with commercials and then feature films.

At this stage of his talk Alex put his journey on pause to share the history of storytelling, which began simply as a way to make sense of the world around us. In 1440, the printing press changed everything, and the idea of the singular author (in writing, film, music and art) began to emerge. Now we’re entering what Alex describes as the “post-cinematic” era, in which augmented and virtual reality tools are fundamentally changing the way we think about storytelling.

When his career in film began, working on smash hits like Fight Club, the process that was followed was an industrial one. Gradually, as we inched towards the so-called post-cinematic era however, the process became non-linear. This was first put into practice when Alex worked on Minority Report with Steven Spielberg in 1999, where the design of the world preceded the telling of the story. Alex and his team knew this world intimately, and it became a container for the narrative – for instance, it sparked the signature vertical car chase. In conceptualing this world it was also important that it didn’t feel like far-off science fiction, as Steven challenged them to make it Future Reality. And they did: over 100 patents have come out of Minority Report over the years, including bio-mimicry and the gesture system.

Perhaps most fascinating is the real world application of “world building”, helped along by advancements in VR tech. Some recent examples of Alex’s work in this arena include a project where he envisioned a sustainable community in Al Bahya, Abu Dhabi, 10 years into the future, another reveals the past, present and envisions the potential future of the ocean. “I have no specific interest in VR,” Alex says, “but it’s a form that gives us a level of access that we can’t get any other way.” He concludes with a poignant and open-ended remark, “It’s in all of our hands right now.”

You don’t have to go far to get inspiration

Spanish designer Jaime Hayon showcased a consummate portfolio of sublime design work. “Design should say something, it should be comfortable. I start with a simple concept and then it evolves with trying to make it in a way that is honest”, he said. To illustrate this, he juxtaposed two images, one of the Catch Chair which he designed for & Tradition and the other of an animal’s paws wrapped around tree. He then humorously added, “if you look at chair, it should seem comfortable”.  Jaime has a large range of design work from furniture to interiors, ceramics and installations and is inspired to reinterpret the traditional for the now.

He recommended flipping through an encyclopedia and stopping on a random page as wonderful source of inspiration. In closing he uttered, “at the end of the day I have my own fantasy. I never thought how design should look like. I never thought about defining myself. I don’t care. I’m just a creative person. It’s the curiosity and  naivety which brings something different the design today”. Some of his international collaborations include working with Baccarat, Choemon in Japan, Bosa Ceramiche and Lladro. Jaime was named “Breakthrough Creator” by Wallpaper magazine, an apt title for a creative, whose craftsmanship displays top-notch design and whose vision elevates his products to functional works of art.

I want to sculpt sound.

Closing Design Indaba was music pioneer Imogen Heap, who wowed the audience with a breathtaking performance of her new song ‘Tiny Human’ using her Mi.Mu gloves. They’re still in pre-commercial stage but their technology enabled her to physically sculpt sound instead of playing an instrument to create music. Along with this, she spoke about the structure of the music industry and how there are so many team-players who contribute to making an artist’s album, but who get little credit for their work.

“Each song has a story, there is a whole world around it”, she said when speaking about how Block Chain Technology can revolutionise the music industry. Block Chain Technology means cutting out the middle man and allowing artists to receive payment directly from their fans. It also presents the possibility of creating a semantic music web, where artists will have access to data such as where it’s most lucrative to plan tours, which radio stations are playing their music and where they can grow their fanbase. For Imogen the future of music is, “about being able to connect with the journey of your song, so it doesn’t fall off a cliff. We need to build something that’s fair, true, good, flexible and resilient. We need to sustain the future of music”.