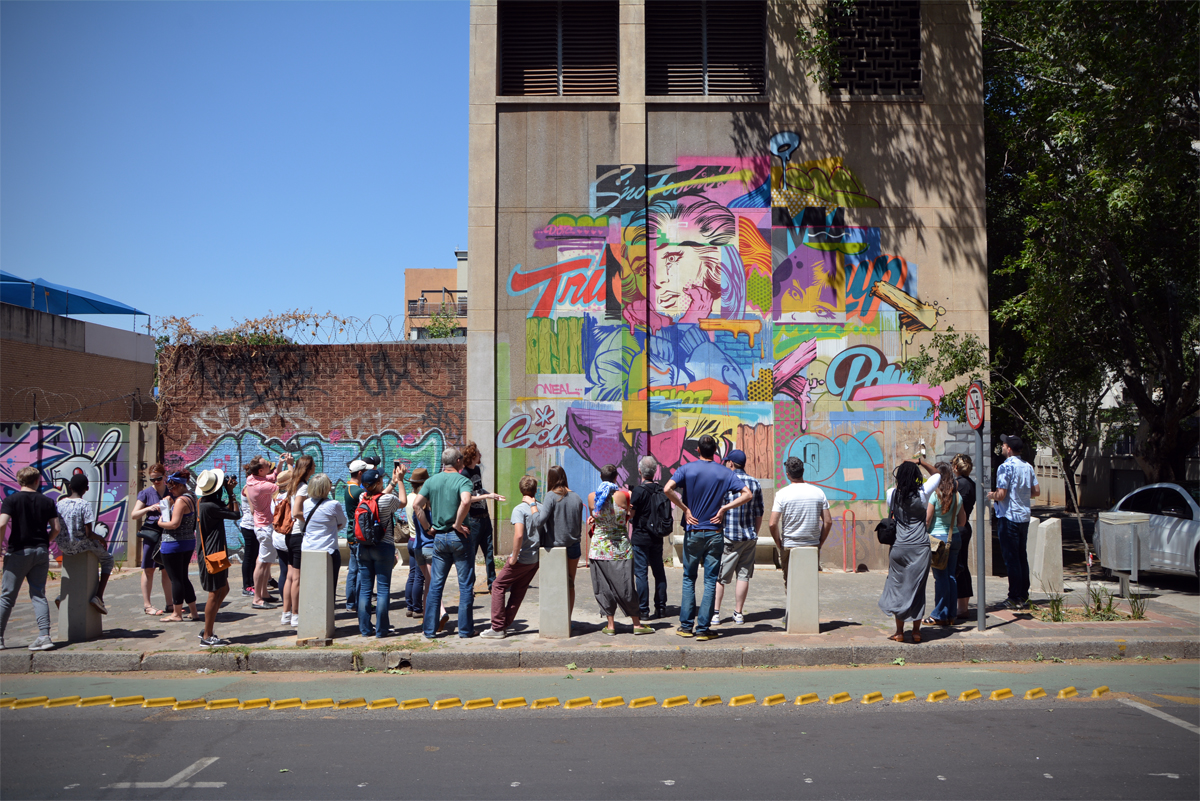 Graffiti in South Africa has always been a contentious topic. It’s been called public art, vandalism, a tool for social change, a gateway to further crime and urban degradation—essentially, it’s an artform with various symbolic meanings and is only recently experiencing widespread corporate backing and interest in the public sphere.

To go back a few decades – around the 80s to be precise – would find you in the origins of South African graffiti. It was the days before Montana cans with specialised caps that aid in finer lines and less drips. The days of Sprayon bought cheap from hardware stores, thrown haphazardly into a backpack to rattle around as you made your way trackside to paint the fresh steel of the city’s trains. The style was crude and unrefined, copied out of international graffiti books like Subway Art and Spraycan Art by documentarians like Henry Chalfant and Martha Cooper, rare commodities in SA at the time. Back then the writing on the wall came in the form of a few big names—Gogga, Falko, and MakOne1 amongst others. Much of the graffiti was political, marking the white walls of the apartheid regime and calling for the release of political prisoners. It was a time that many of today’s established graffiti writers look back on as their inspiration.

For all of the public’s past disdain surrounding graffiti and street art in South Africa however, it is now becoming a commonly accepted artform. There are a number of contributing factors towards this, namely graffiti walking tours, brands that make use of the aesthetic in advertising, the role of social media, and rapidly urbanised areas that make use of commissioned graffiti. Most, if not all of these things, now offer graffiti writers a chance to make a profit out of their work.

A Johannesburg based writer who’s gone through all the motions of graffiti, but now opts for the more personal side of the art is Bias. Having practiced graffiti for about 11 years now, Bias started where all graffiti writers start—with bombing. Bombing is the illegal side of graffiti. The tags, the throwups that mostly come in the form of chrome lettering with black outlines, and the pieces you see on trains, tunnel walls, and alongside highways. Having honed his skills on countless walls across the country, Bias is now one of the most well-known writers in Johannesburg and while he may do a few commissioned pieces and murals, he still paints regularly amongst the lesser travelled concrete spaces that form the city’s hardened arteries. These spaces are commonly referred to as ‘secret spots’ and see graffiti being created purely for the love of the art and not for public validation.

“I love exploring and I am an archaeologist so I love to be out and about discovering new things,” says Bias. “Sometimes other artists do discover my spots, but I have some that I think will never be found. I’ve done hundreds from Johannesburg to Pretoria. I did one recently where I walked an hour next to the highway to then climb down a waterfall to paint one tunnel. Even if only that one piece still lives on after I am gone, I will be content.”

While he may prefer the inconspicuous pieces and the occasional legal mural over bombing these days, Bias explains that with graffiti, both sides of the artform will always exist. The bombing coincides with the legal pieces, and most of the time, allows artists to hone their skills, one day leading up to commissioned pieces. “Graffiti is never one or the other, it will always have both elements, they are part of the subculture. The benefit is that once you accept that, you can always be optimistic that the person who is doing tags will one day emerge from his cocoon and start painting the colourful murals. Everyone needs to practise to create something better, that’s how one becomes the other.”

Because of the way graffiti is carried out and practiced, it remains a largely misunderstood subculture. Gang tags and senseless vandalism often get lumped in with professional graffiti. Long-time graffiti documentarian and recent publisher of the book, Graffiti South Africa Cale Waddacor points out that graffiti which is carried out by graffiti writers largely adheres to a few unwritten rules. Property that is never to be tagged includes residential property, historical monuments, and places of worship amongst others. Similarly, respect for another artists work comes in the form of a hierarchy, namely—throw-ups cover tags, pieces cover throw-ups, and murals cover pieces. Never the other way around.

“Tags are in some cases the seed for better graffiti to come, like pieces and murals,” says Cale. “Many times graffiti leads to regeneration, as areas of rampant graffiti draw the attention of developers. It’s strange how they overlook abandoned and forgotten buildings for years, like many hijacked buildings in Johannesburg, but once more and more graffiti is painted on it, only then will they feel the need to fix or destroy it.”

He also adds that while graffiti writers have been previously overlooked, graffiti’s move into wealthier spaces is opening more doors for artists. “The boundaries of public are becoming more blurred and different types of art are being commissioned for public consumption.”

However, the motives behind this are still questionable. By the early 2000s, graffiti had already solidified itself in South Africa with a growing number of artists and graffiti crews in all of its major cities. In Cape Town the graffiti scene was thriving. Around the time of the 2010 FIFA World Cup, however, the city of Cape Town implemented a series of by-laws to tidy up the city for its esteemed international guests. One of these by- laws imposed a serious clamp down on graffiti. The chemical removal of graffiti and street art, otherwise known as ‘buffing’ took place all over the city, removing all traces of illegal graffiti under coats of bland cement and strokes of white paint.

Interestingly, just before kick-off, legal murals began springing up at strategic points all over town in an effort to showcase Cape Town’s eclectic community of artists. Goals were scored, the tourists packed up and left, and the by-laws remained enforced. While the city’s illegal graffiti scene still exists, it’s taken a considerable knock, while legal graffiti on the other hand, has exploded onto the scene.

An artist who’s well known for his commissioned work is Damn Vandal. 13 years back when he was still a student discovering hip hop and graffiti culture, Damn Vandal, started experimenting with the art form and back then, had no intention of making money out of it. “Initially it was a form of expression, a chance to rebel and leave my mark in the world, to be noticed. The last thing I thought of was money, it was kind of the opposite. I spent every cent on spray cans and markers.”

Now the artist is rarely without a piece of commissioned work. Legal pieces and murals in the public eye, he believes, have the power to change and uplift the environment. “Whenever I approach home owners and businesses for their walls, I base it on making the area look better, especially in areas that are run down and derelict.”

Once a crime ridden area, Cape Town’s Woodstock now sports a host of street art and public murals. Likewise, Johannesburg’s Braamfontein is bursting with graffiti that decorates the walls of businesses, social hubs, and areas in close proximity to well frequented gallery spaces and restaurants. Both of these areas and the patronage they enjoy are direct results of urban regeneration programmes that have further marginalised the poor and increasingly isolated the spaces to allow in only those who can afford to live and visit the space. How much of a role graffiti plays in this is hard to tell, but there is certainly a breadcrumb trail leading from the commissioned artworks to rapidly gentrified areas. This is not to say that the artists are at fault here, but rather that the way in which the public art form is being used by businesses and private sectors is suspect to say the least. While increasing appreciation for graffiti can help us to better understand both the history and the future of the art form, we must pay careful attention to who is now celebrating and lauding it and to what ends.

As a medium that extends itself to almost every corner of a city for all to see, graffiti has always been (and probably still is) one of the few true forms of public art in the country. It is a golden artform that as a result of the aforementioned public acceptance can now exist in gallery spaces as well as lower income areas, for all to see and appreciate. As Cale, Damn Vandal and Bias collectively explain and agree upon, graffiti has the power to change how people view and interact with art, but next time you see a piece of graffiti or street art, take cognisance of the space that it’s being exhibited in and why it’s there. Graffiti still has its roots in the politics of space, nowadays they’re just more widespread.

All photos by Cale Waddacor of Graffiti South Africa.