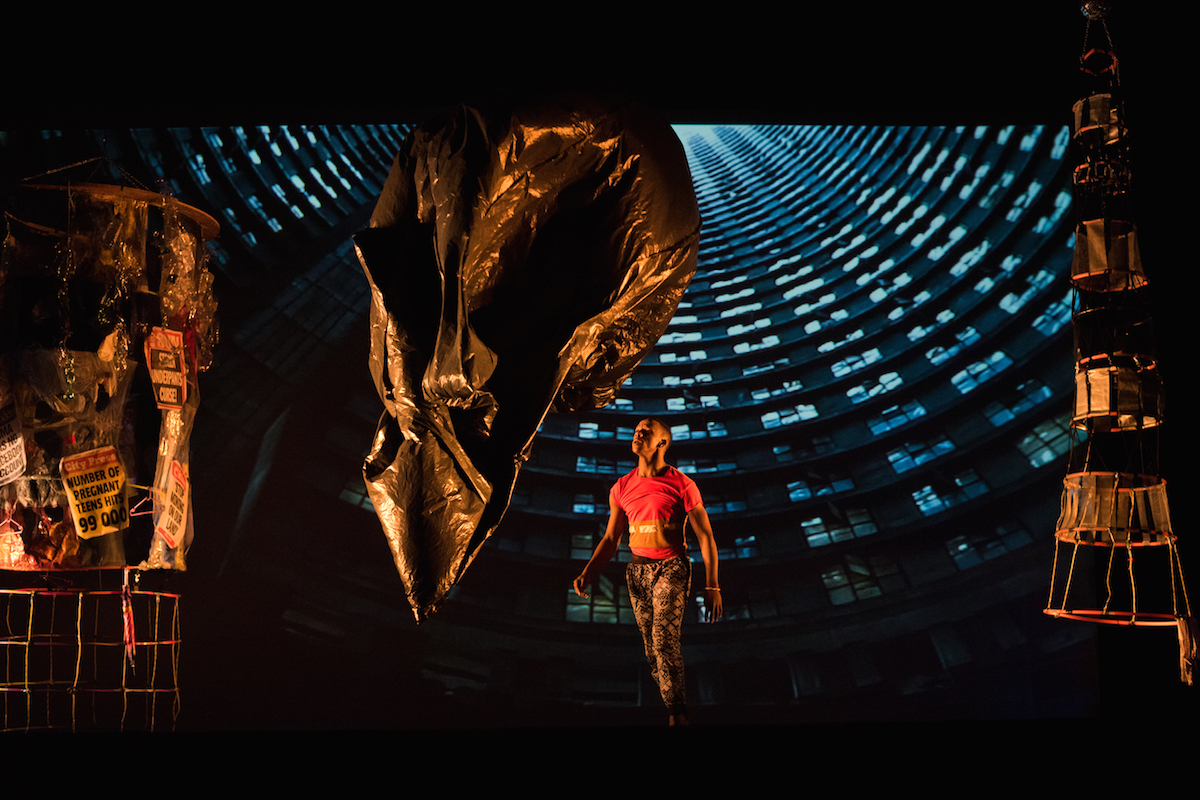 26 Feb Romeo and Juliet in Jozi

The 28th Dance Umbrella festival opened last night with Jessica Nupen’s high-energy vibrant reinterpretation of Shakespeare’s Romeo and Juliet with the dancers from Moving into Dance Mophatong. Rebellion and Johannesburg was developed by the cast from personal narratives and experience. The dancers playfully question and explore gender roles, politics, urban sub-culture and stereotypes against the backdrop of the Jozi urban jungle. The cast, which includes Sunnyboy Motau as a lovelorn Romeo and Thenjiwe Soxokoshe as a feisty no-nonsense Juliet, bring the story to life in movements and routines inspired by township sub-cultures and dancing styles like iZikhothane. The stage setting cleverly reflects the Joburg skyline and the wonderful costumes by Anmari Honiball, film by Ed Blignaugt and music by Spoek Mathambo create the rich, colourful and quintessentially Joburg aesthetic of this performance. We caught up with Jessica, Anmari and Ed briefly to find out more about the production.

What inspired the choreography and re-imagining of Romeo & Juliet?

Jessica Nupen: Romeo and Juliet / Rebellion and Johannesburg is inspired by redefining the story of Johannesburg through the appropriation and reappropriation of space, identity and culture, and expressing it through acts of resistance and rebellion. The reinterpretation of my generation’s environment which is a melting pot of influences in a sub-culture of artistic expression is being seen more actively in Johannesburg than anywhere else in the world. The iconic characters of Romeo and Juliet and their own tumultuous struggle played against their families’ and their own ideals and symbols of self-expression were at the center piece of a city in turmoil. The characters’ attitudes towards these struggles spoke strongly to me in my own interpretation and encouraged me to explore what the attitudes and opinions of my generations’ struggle is. The structure of the classical story allowed me to express the contrast of our own socio-political transformation seen through the eyes of our youth. The rebellion of the characters in the timeless story acts as a relevant symbol and global mirror to our own existence as the ‘lost generation’ in a country in transformation.

What about this dance-theatre piece is distinctly South African?

JN: Using cultural markers such as skhothane and train surfing, which raise the middle finger to mediocrity and tradition, up-and-coming South African youth are demanding recognition. These iconic symbols of self-expression have been appropriated to form the centre-piece of this innovative new dance piece that showcases the depth of South Africa’s young creative talent alongside its rebellion.

The piece deals with resistance movements synonymous to South Africa and its cultures and to the story of Romeo and Juliet. Although the story is used mostly for its interpretive structure, it portrays through the eyes of Johannesburg’s youth the rebellious nature of a generation. Skhothane and train surfing are symbolic of the excessive waste, careless spending, boasting, and capital-battling prevalent in our society today. Skhothane is a township sub-culture that has emerged in the democratic years of South Africa’s new history and is used as a form of expression and a way of taking control back in lives that are seen as being undervalued. These sub-cultures reflect the complexities and the roots of a very rebellious generation. Spoek Mathambo and I worked closely on the original score for the piece and he aptly calls this time in democratic South Africa “the apartheid afterparty.” Using this reaction to democratic South Africa fused with Spoek’s eclectic township electronic music, I wanted to use dance and film to explore the daily challenges faced by the dancers and get them to create discourse around what they were experiencing in life translated into our artistic language of dance. As the CEO of Moving Into Dance, Nadia Virasmy says, “it is an emotional piece for the dancers because it is in essence about them.” There was a lot of workshopping and discussion around the particular scenes in the piece. The dancers’ experiences and social realities essentially influenced the development of the story. The work was used as a method for self-expression and I believe this kind of self-expression through dance, particularly from the point of view of the “lost generation” is going to change the future of contemporary dance in South Africa as long as we continue to encourage it.

What inspired the costumes for this piece?

Anmari Honiball: I worked with Jessica while she was creating the piece and every week we would reflect on the stories and movements developed that week in the studio and build the wardrobe around that as the piece progressed.  I live in Johannesburg and remain constantly aware of the vibrant mix match of prints and colour and self made styles. Inspiration is constant.

How do the costumes create a visual language that reflects the themes in the piece?

AH: The costumes exhibit a mixture of street culture inspired clothes combined with a more theatrical movement inspired costume. The pieces are playful and add vibrancy to the movements of the performers while lending relief to the themes themselves in their progression.

How have you used different fabrics, colours and shapes to enhance the movements of the dancers.

AH: Each character has I bit of a different personal style. There is also a bit of tongue in cheek humour in some of the characters – for example, the phony witchdoctor has a very pimped out style.  All in all the colour and print combinations draw on the piece’s demand for a bright, colourful and energetic wardrobe which imbues the piece with a sense of constant animation.

What are the iconic scenes of Jozi for you?

Ed Blignaut: The iconic scenes of Joburg for me are firstly and obviously the Ponte Tower. It has had a big influence in the way that people view the city. The streets surrounding the building are also very iconic but can be seen as any African city so without a doubt it is mostly the views surrounding and the skyline with the two towers – Hillbrow and Brixton.

What where you looking to depict in the images you shot for this production?

EB: I was looking to depict the raw energy of Jozi. It needed to feel real therefore we didn’t set anything up. We went into town expecting people to be curious. We played with the idea of random people being in our shots, standing around and even joining in. There were some instances where we had to be cautious and quite low key, for instance at very religious places but we managed to incorporate a lot of the Jozi vibes that anyone could find on the streets and the surrounding spaces.

How do the many stories that make up Jozi come through in your film?

EB: The stories surrounding Jozi come through because the background on the images show ordinary people going about their everyday lives and this is incorporated on the images we captured. Other than that it is a story of a boy who comes from a rural background into the city to make a life and without a doubt this is the story of most urban dwellers. Everyone views Joburg as a place to hustle, make money and get more opportunities than you would anywhere else so in essence our production is telling the story of most people living in Joburg.

All photos by Steve Thomas unless otherwise stated