Posted at 15:17h in Featured, Guides by Layla Leiman
0 Likes

It’s a big weekend in Durban this week: The Loeries Creative Week will culminate in the awards ceremony on Saturday and Sunday, and the annual Interpret Durban creative festival is going down on Saturday night in Rivertown. And to help you wind down after all this festivity we’ve teamed up with the lovely ladies from The Other Girls to host a Sunday WKND Social brunch at Ciao Bella in the Point. So to celebrate Durban we’ve got in touch with some locals and asked them to share some gems about this city by the sea.

Matt Kay is a photographer whose work we’ve been following for some time. We recently published a photo essay with selected images from his ongoing series that documents the beachfront, and last year we included Matt in our Young South Africa series (now called Bayeza).

Dean Charles Hauptfleisch won the SAFW New Talent Search last year with his label WITH (you can read an interview we did with Dean here). Brendan Sturrock designs womens and mens apparel for home-grown Durban label Amanda Laird Cherry.

Anna Whysall is a young tattoo artists and self proclaimed heart breaker and voodoo maker.  from Durban. While Anna has recently relocated to Cape Town, her heart remains true to Durban.

Roxanne Robinson moved to Durban in January this year to take up the position of trend forecaster at retail giant Mr Price. In this relatively short time, Roxanne has made Durban her own! Last year we spoke to this fashionable lady as part of our Creative Womxn series, and keep our eyes trained to her Insta feed for her signature take on style.

Snapbvck are a music duo making music that blends together elements of electronic, funk, hip-hop, house and trap.

Dean & Brendan: Yes, Durban is certainly HOT, we moved here from JHB and somehow the QUIET roads outweigh the humidity. Durban is also really LUSH, but most importantly, there’s things to do here that don’t involve travelling far and spending tons of money. The LIFESTYLE magnet isn’t only for families with children; we enjoy it too.

What are three of Durban’s best live music venues?

Snapbvck: We’d have to say (according to shows we’ve been to) Jazzy Rainbow, Brew Haus and the Winston.

The most underrated thing about the city?

Snapbvck: Durban has a lot to offer – not just sunny days and the beach. The youth of Durban are very unique and talent driven. From fashion to music, this city is blessed.

Gifford: The most underrated thing for me is definitely the surf. Durban has world class surf!

Where do you go at 2am on a weekend?

Snapbvck: We’re normally in the studio making music but if there is a place to go to, it would normally be a mellow night out – drinks on Florida Road (Spiga/Side Bar if it’s open).

Roxanne: 24-hour bakery, Bread Ahead, for a pie or a bag of donut holes.

Dean & Brendan: Cool Runnings is a usual ‘last’ spot to end up at, otherwise nightcaps and vinyl dance parties is a worthy alternative.

The beachfront by Roxanne Robinson

Snapbvck: Durban sounds like South Africa’s playground, which is very clichéd but it really is. It’s rich in culture and talent in all artistic fields and extremely laid-back.

I heart Durban because…

Roxanne: I moved here in January knowing nothing about the place. Got the shock of my life when I arrived because the humidity is worse than they say it is for someone who grew up in the Western Cape and it’s so tropical compared to Joburg, where I spent the last 5 years. I see the trees and creepers bloom along my route to work and past the view of the city there’s the sea. I have an after-work local where they know my name and my drink of choice (Windhoek draught in a nonik, thank you!)  and I have made friends that have made me feel as though I’ve known them for years. Also, Afros chicken shack on the beachfront is amazing and the crumpets at the botanical gardens are worth moving here for. As an added bonus, Durbanites know the correct way to use a traffic circle (yield to the right, Joburg).

I hate Durban because…

Snapbvck: Hate is a very strong word. There’s no hate for Durban, it’s our home city. BUT, some things can definitely be improved such as the chill spots around the city. Not a lot of pubs and restaurants are open after 11PM during the week as well as some weekends. Durban culture is very unique compared to other cities in the country; we can definitely utilise this and create more places to go to.

Without telling us its name, describe your favourite local gem.

Dean & Brendan: Delicious scones and cream or a generous crumpet stack that needs to be enjoyed at these Wes Anderson inspired mosaic outdoor tables. Plenty Pokéstops wherever you look surrounded by ALL of the green stuff.

Crumpets in the Botanical Gardens by Roxanne Robinson

Tell us a secret about the city.

Matt: It’s probably not a secret… but Durban officially has the best collection of Art Deco architecture on the planet. The next best is Miami.

Roxanne: No one ever tells you how great the fun fair on the beachfront is, partly because no one thinks it’s cool anymore, but to me it’s one of the most underrated Durban gems. You can get hot chips with masala spice, they start the rides up just for you and they have old arcade games down by the bumper cars. Also, you have the best view of the beachfront from the cable cars.

Dean & Brendan: Durban houses some of the most notable Art Deco buildings in the world and we’re lucky enough to live in one of them. Oh, also, Uber trips are ALWAYS cheap here!!!

Anna: Durban doesn’t have secrets, and that’s what I love about it. Its honest, true and not pretentious at all. What you see is what you get, all the cards are out on the table. Shit, I miss Durban now!

Favourite worst thing about the city?

Matt: Shoes are optional, at all times, at all places, always.

Roxanne: Durbanites really like to exercise – like, a ridiculous amount. Everyone seems to be active. But there’s nothing like a child whizzing past you on a skateboard or seeing two kids carrying a longboard into the sea while you’re sitting at Surf Riders (nursing a slight hangover by eating cheesy fries and drinking beers) to make you feel like you’re missing out on something. So I signed up to parkrun and I’ve recently bought a good-looking road bicycle.

Gifford: I love the nature of Durban. My worst thing is the litter on the beaches.

Anna: My favourite worst thing about the city is that I feel scared when I’m out and about doing my thing (wheatpasting). The city isn’t the safest place but I guess its taught me to be street smart and to watch my back.

Roxanne: Overlooked. I didn’t know much about Durban and its creatives until moving here, (not sure if that was due to me having blinkers on, or because Durban doesn’t really shout loudly about its treats). There are so many talented illustrators and musicians, and then people like Ryan van Rooyen (DJ Fuego Heat) who put effort into showcasing this. We also have our own First Thursdays, so that’s rad.

Dean & Brendan: In the sky. Whether were experiencing torrential rainfall, or humid, sweaty days, the sky is there to remind us that we’re not on a permanent vacation, we just live here and get to see all these beautiful things every day.

Anna: Wild. Some of the most talented and creative people I have ever met come from Durban. I don’t know if it’s something in the air or maybe in the water, but I believe that Durban creatives are so fresh, unique and forward thinking. Not to mention hard working. They bring a different kind of feel to creativity that’s honest, raw and out the box.

Is there more to Durban style than the ubiquitous baggie/flip-flop combo?

Roxanne: Well, sometimes people are wearing chino shorts with no shoes, and most of the time they’re wearing vans. I once went out in Umhlanga and some girls looked me up and down and asked if “I meant to go out dressed that way”. I’ve made peace with the fact that I probably won’t see someone wearing a Yohji style trouser and a perfectly awkward white shirt, or something by Clive Rundle or Superella. But I have a completely new understanding and love for the skate scene and the unapologetic style that goes with it. So, I bought two pairs of vans, a STUSSY bucket hat and I now use a tote bag as a handbag.

Why do people leave this city? What makes you stay?

Gifford: I think a lot of people move from Durban because they haven’t discovered its cultural gems and so they move to places that have a bigger cultural/arty scene. I have stayed in Durban because there’s no place like it. I love the people, the nature and the surf.

Anna: Not everyone leaves this city, it’s a beautiful place to live with the most relaxing atmosphere mixed in with kind hearted, GOOD people which is rare to find these days. I know a lot of people who would never dream of moving. For me, it was more of a stepping-stone to get me to where I gotta be in life. I grew up in Durban and lived there for 19 years, I just wanted a change for myself, so I moved to Cape Town. My biggest dream has always been to move to London, so Cape Town is also a stepping-stone for me. But Durban will always be home, and there is no feeling quite like the one I get when I’m in Durban. But I think a lot of people get bored with Durban because they think that there’s not much to do. But this is where they are wrong, Durban has so much stuff to offer that the other cities do not – it just takes a little more research and requires you getting off your lazy butt to go explore, which is what I love!

Where’s the best view? And what has the worst view but is the most fun?

Gifford: The best view in the city is at backline at sunrise. The worst view is the litter on the beaches, but I love getting down to the beach nonetheless.

Anna: Best view in my opinion is probably The Cube close to Florida Road. It has the most incredible view of the city, go check it out with a Roti from Jonnies after a night out drinking Black Label quarts and I swear, it’ll change your life. Worst view, but best at the same time is probably the back section of The Winston Pub aka my second home. It’s deep in the city, but it’s constantly full with some of the best people you’ve ever met who are sharing drunken stories over cheap drinks.

Gifford in his element 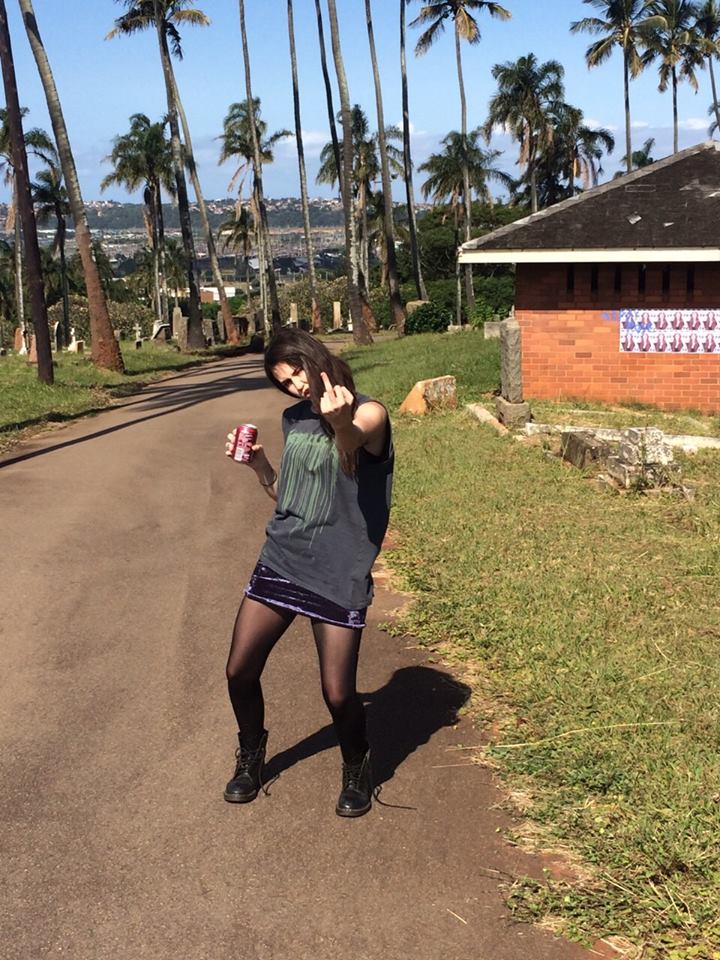