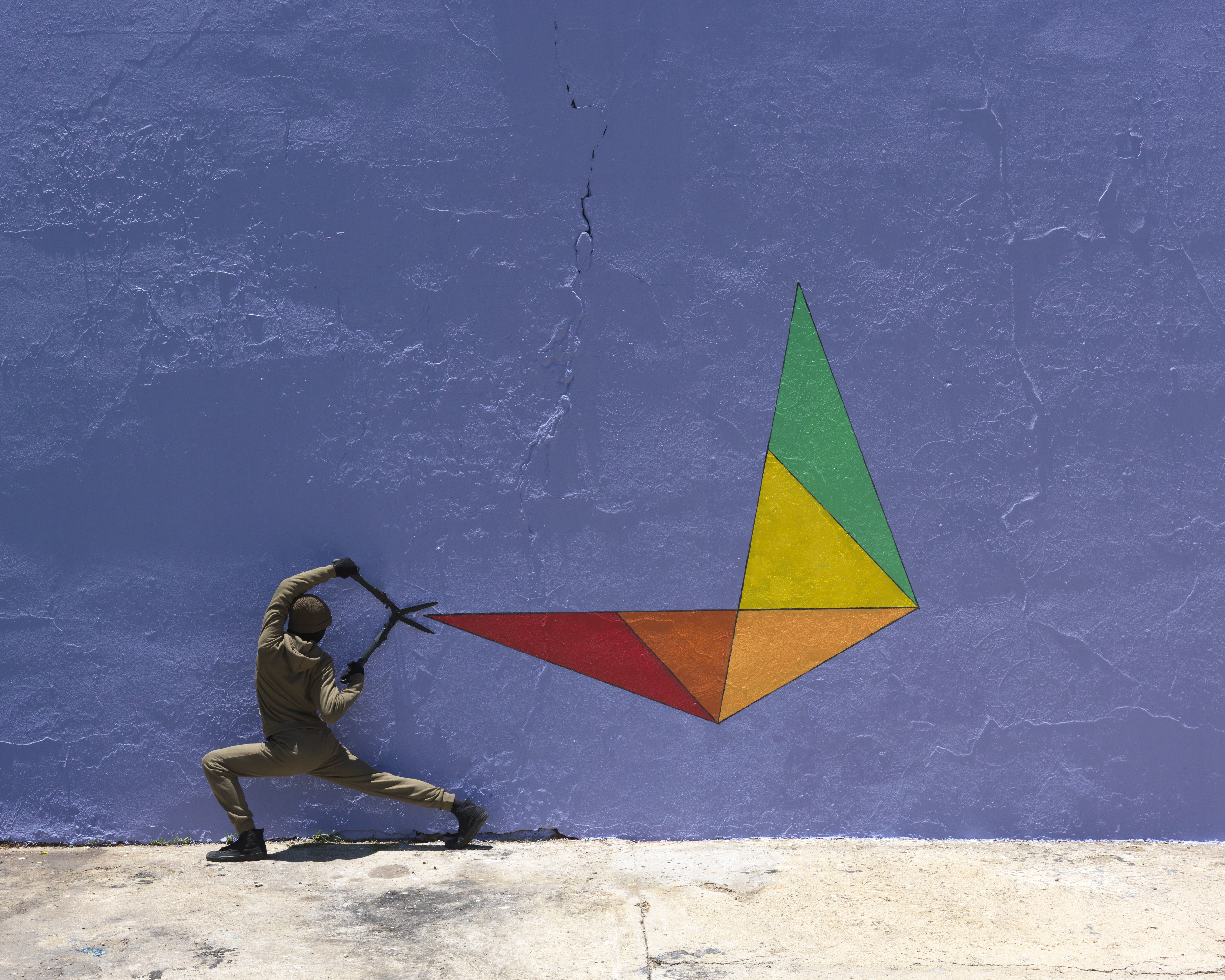 In this week’s dose of creative cool, we bring you a short glitch-documentary on old narratives in a contemporary South Africa, a new addition to Durban’s street art, exciting new exhibitions, flowers that’ll make you feel loved, and so much more. Dive in.

We stumbled across local streetwear brand TrashyFash on Twitter this week. They’re fairly new to the scene, offering up their products in the form of caps, jackets, t-shirts and more. Be sure to check out their collections on Instagram and Facebook. 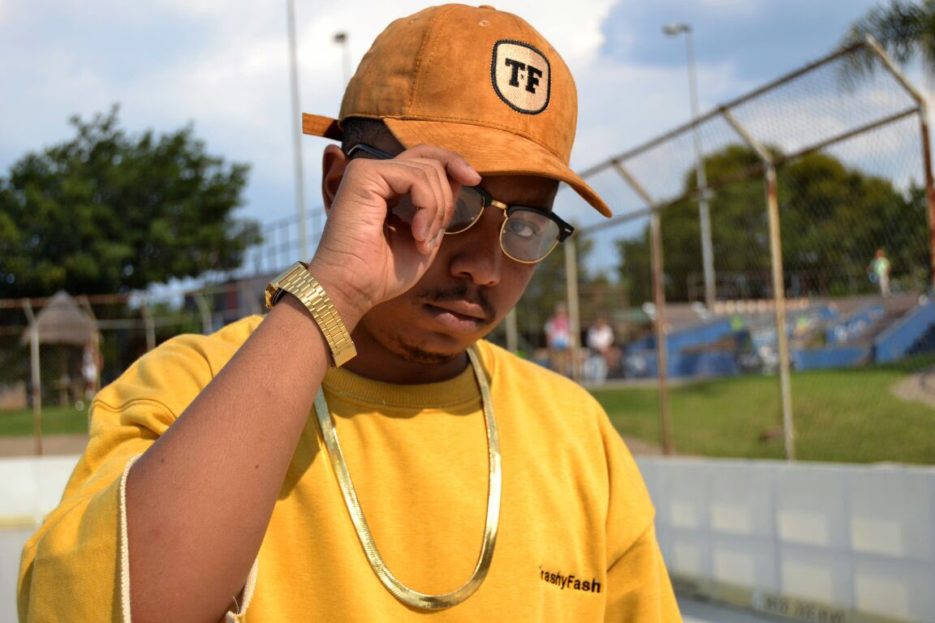 Johannesburg-based creatives Lezanne Viviers, Daisie Jo, Hanro Havenga and Sibella Weber came together to produce a fantastical series of digital collages titled #ARTANDBLING. The series reflects on the current zeitgeist with a focus on social media. Read our full feature on the series over here. 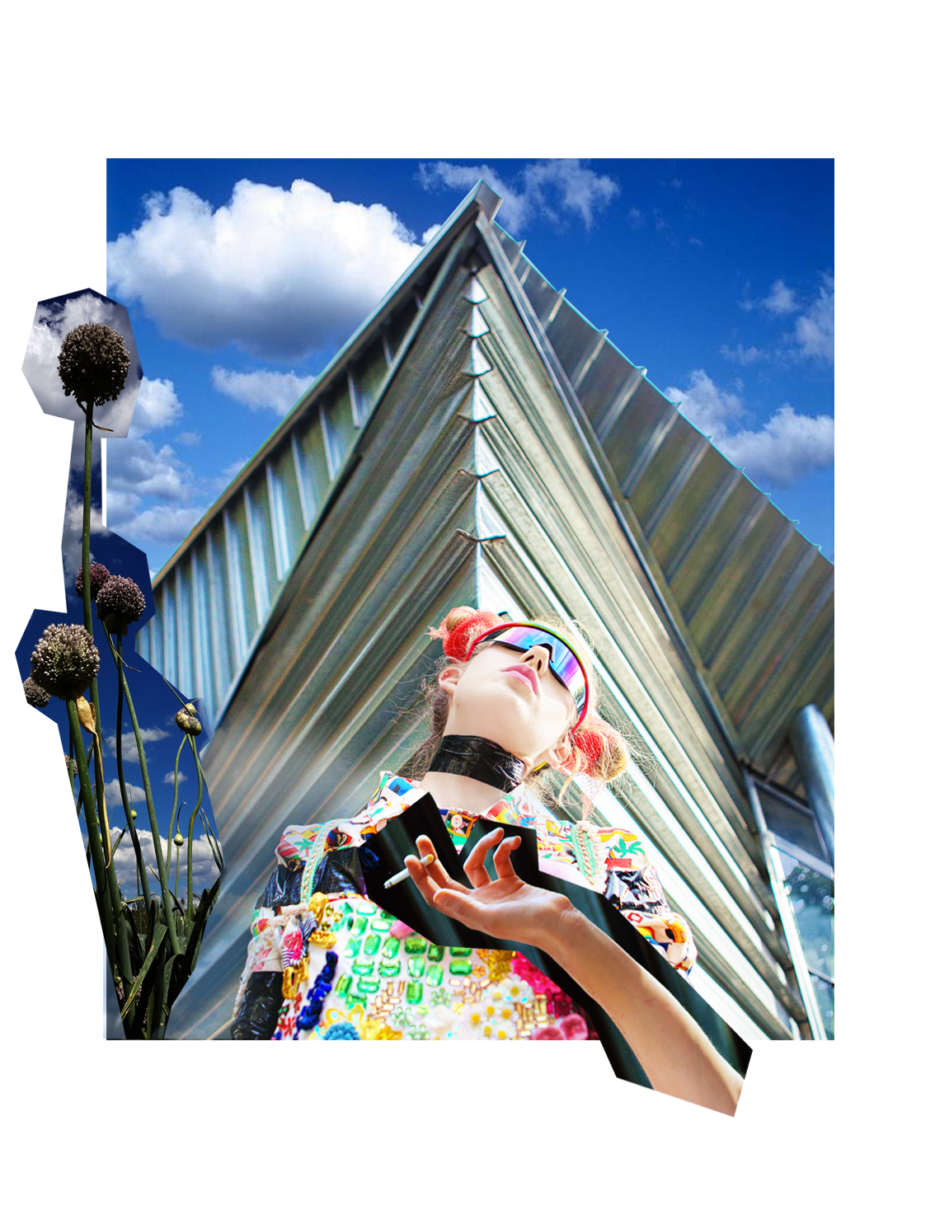 Adam & Eve by THE YOLKE

THE YOLKE is a Fashion and Art visual diary consisting of five chapters. Chapter 1 is titled Adam & Eve and is the collective’s own narration of the biblical tale surrounding Adam and Eve. “In the story the couple is African and the Garden of Eden is set in Africa – which is the root of all origin,” explains photographer and creative director Lethabo Machele. Check out more of THE YOLKE’s work on their brand new Facebook page.

Flowers always do well to brighten up an otherwise dreary day and this week we got an inbox full of beautifully illustrated, heart-shaped flowers courtesy of illustrator Nikki Meier. Be sure to view the full series on her Behance.

Al Luke is the creative director of Blacksheep Design Studio and while he mostly operates within the realms of advertising, he’s also a keen artist whose works aim to visually translate personal and societal connections between humanity and theories within the fields of science, biology and mathematics. You can head over here to see more of his work. 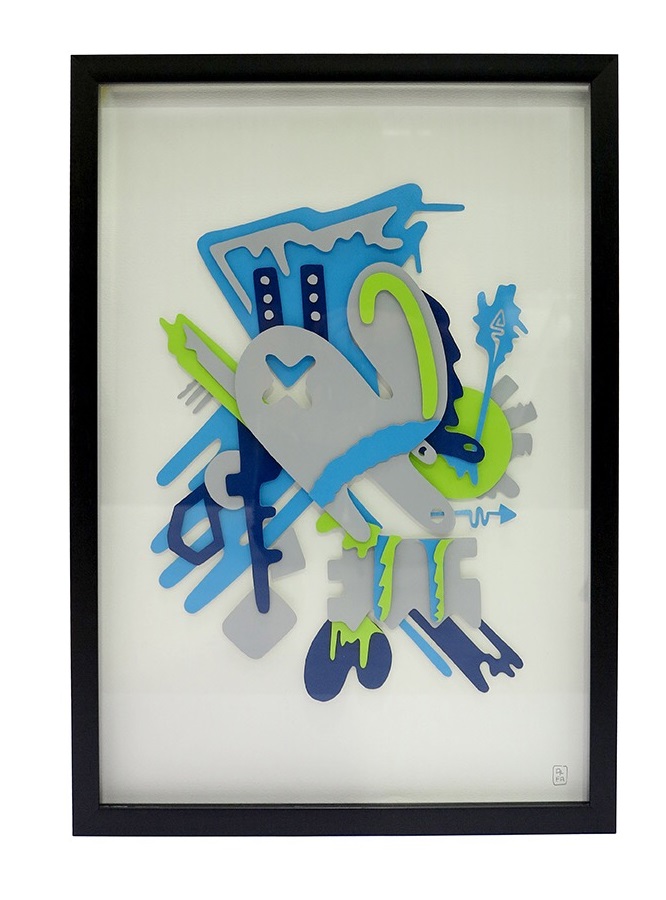 This isn’t really all that new, but it fell off our radar during that chaotic end-of-year period hurtling towards the holidays. So we’re revisiting it today! Situated at Durban’s Station Drive, Resoborg’s latest work sees him channel his digital illustration work through the medium of paint to brilliant effect. Check out the video below to see how it came together and read up on the mural here.

STALE is a documentary by Dani Eugenie O’Neill that aims to interrogate and make sense of the neo-apartheid white male agenda in South Africa through a series of intimately-framed interviews contrasted with old, glitchy TV commercials and programmes. “Fragility, expiry dates and stale narratives,” reads the artist statement. “It’s a mixture of white bread crumbs, conversation, cultural identity, personhood and privilege. STALE tries to explore the intimacy of the ‘post-democratic’ white lie, and other truths, fragilities, and memories.” Watch the documentary below and find more by Dani on Instagram.

Card on Spokes dropped his latest music video earlier this week. It’s an eery, black and white narrative directed by filmmaker Sara CF de Gouveia which follows the surreal journeys of a writer wrestling with a bad case of creative block. Check it out bellow and read more about the video here.

Comprising seven experimental electronic tracks, Songs From The Bath is a project that’s been two years in the making. This week saw it being released to the public. Here’s what Thor had to say about the release: “I have written and recorded [Songs From The Bath] in South Africa, Germany, Spain and France. I have had the honour of working with some of the best musicians I know, such as; Alice Phoebe Lou, Hlasko, Olmo, Itai Hakim and like 20 more incredible people from all over the world. It brings me great joy to be able to finally share this body of work with you all.

What are you waiting for? Give it a listen on Soundcloud asap! 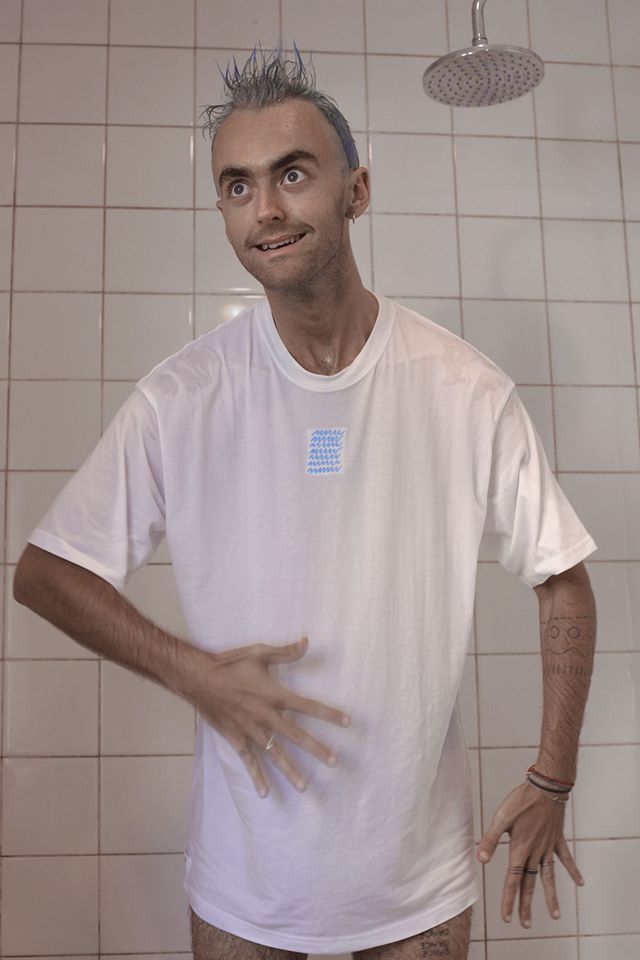 The Tazers, Hellcats, Sol Gems and The Myths come together this Saturday for an evening of overindulgent psychedelic rock ‘n roll with a healthy dose of 70’s nostalgia. Dressing up is more than encouraged. Full details this way. 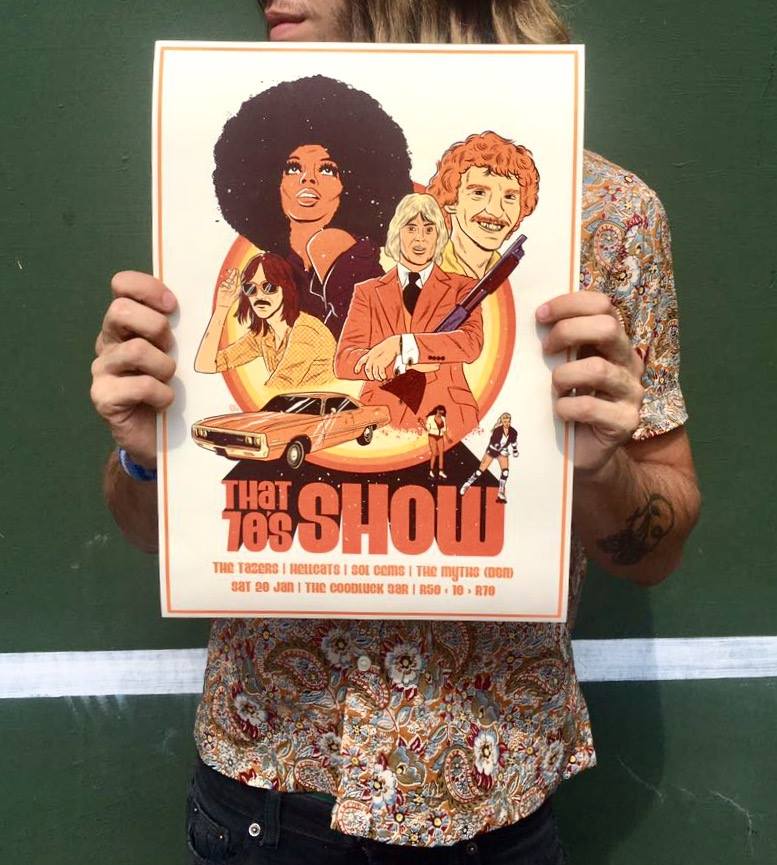 The Luna Sessions encourage both bands and audiences to experience something new in the form of acoustic sessions. Be it punk, psych-rock or straight up rock ‘n roll, The Luna Sessions invite live acts to unplug and slow down for a night of acoustic goodness. This Friday’s event sees both Runaway Nuns and Retro Dizzy take to the stage. Keen? Of course you are. Details this way.

His third solo show with Stevenson, Paths and Fields will be a mixed-media exhibition seeing photographic, videographic and drawn works. Since moving to Berlin some 15 years ago, Rhode has gone on to become one of South Africa’s most successful international artists. This specific body of work deals with Rhode’s travels to the North of Italy and the various influences garnered from these visits. Paths and Fields opened yesterday evening and will run until early March. More details over here.

From the series ‘Paradise’ by Robin Rhode.

An exhibition that is the culmination of a post-graduate course entitled ‘Writing Art’s Histories’, Lifescapes: Six Object Biographies sees written biographies of single objects from WAM’s collection. “This is a project about knowledge-making,” says the exhibition statement. “Where students produce knowledge rather than consume it, and where individual interests drive the research.” The exhibition kicks off this coming Tuesday 31 Jan so be sure to jot it down in your diary. Or, you know, just click ‘interested’ over here.

Opening at Rosebank’s Priest Espresso Bar, UNDEFINED is an exploration of the tension between personal and public female identity, as it plays out in the lived reality of various artists. The group exhibition features artists Alexia Cocolas, Minien Hattingh, Stefanie Langenhoven, Laetitia Lups, Shenaz Mahomed, and Alison Jean Shaw. More details on Facebook. 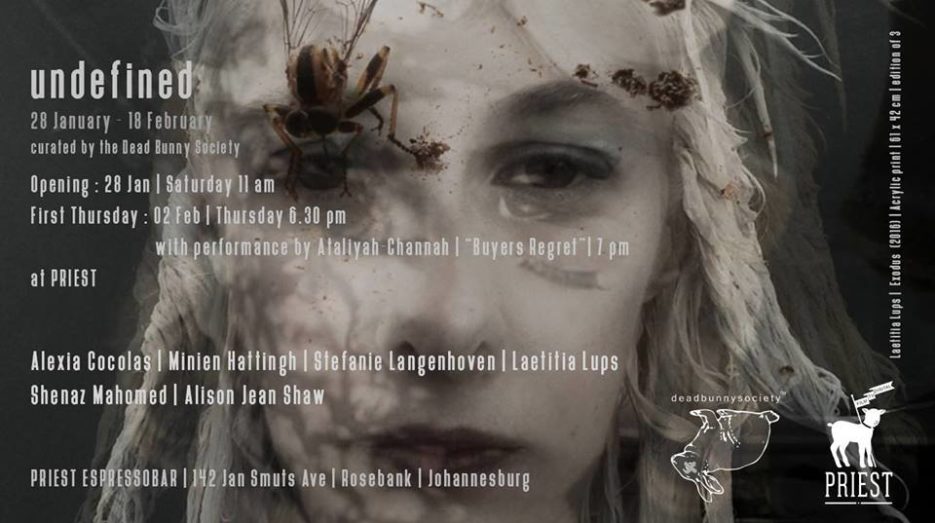 Got something you think should be on next week’s list? Let us know at submissions@10and5.com