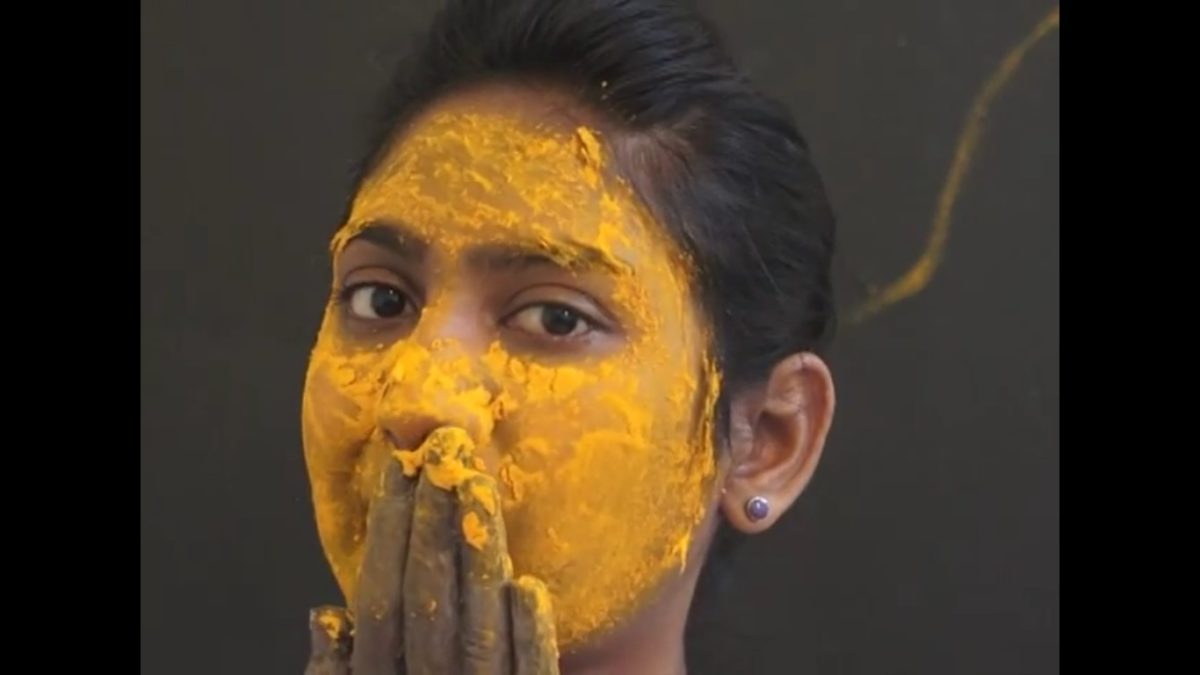 The 2015 and 2016 #FeesMustFall protests have brought with them, not only a host of new artworks, but also, new ways of looking at and using art as a tool for both interrogation, and as a method of understanding. Take the work of Wits Fine Art graduate, Lemishka Moodley for example.

What started as an artistic investigation into the artist’s own cultural rituals and practices, ended up in conversation with the 2016 #FeesMustFall protests. Armed with two bags tied to her belt – one containing safety packs and the other containing tumeric – Moodley walked through sites of violence at both Wits University and the surrounding areas, releasing bursts of tumeric as a form of spiritual cleansing.

Her video works, intimately-framed performances that saw her smearing caked Tumeric onto her face with sculpted cement hands, formed part of her investigations into heritage and culture.

We speak with Moodley about her artistic origins, pushing boundaries and debunking stereotypes, and producing art in a time of unrest.

How and why did you become interested in fine art as a medium?

In general, I have always been very interested about the ways in which I could express myself. I always believed that the medium is dependent on the concept. To be honest, I am still trying to grapple with this idea but have come to terms with the fact that it is a method that works best for me.

To me, Fine Art is essentially a multi-disciplinary course that allows one to creatively express oneself in a physical form. What fascinates me most, is that what I have learnt has taught me not only about the various art genres but also about the philosophers and humanists throughout time and the socio-political and economic issues that artists experienced and used in their own works of art. I feel as an art graduate that I deserve a degree from every faculty – because although I may have not studied the theory in detail, I engaged with the material – whether it had been taught to me or self-researched. The crux of the meaning within the message always needed to be understood and comprehended.

“One of my aims were to push the boundaries and debunk the stereotypes that tends to circulate around artworks that primarily deal with being Indian, the manner in which it functions and the cultural baggage an individual carried.”

In relation to the “how” and “why” – well, it stemmed from making mud-art in my backyard as a child. I made the most amazing cakes and sculptures (if I do say so myself) that won prizes and trophies that were all made by me. In the process of my busy lifestyle of mud-art, I still made time to draw and paint anything and everything. Needless to say, that as I matured, I learnt a lot and my passion grew more and more, which in turn, improved my technique and approach to concepts.

From the year 2015 up until now, my practice circulated around my own cultural heritage and the traditions and rituals that were practiced on a daily basis. Cleansing, rituals and superstitions, although very different, are interlinked and entrenched in the Indian community. I initially began exploring the idea of rituals and how it goes unquestioned as the generations develop. It became a second nature in which one repeats a certain act because ‘my mother and her mother and her grandmother did it’ and so on. Eventually, one tends to not know the relevance as to the why certain cultural rituals are done.

One of my aims were to push the boundaries and debunk the stereotypes that tends to circulate around artworks that primarily deal with being Indian, the manner in which it functions and the cultural baggage an individual carried. But as time progressed, so did my ideas of the Indian traditions and practising rituals that are supposed to make one feel better. In the process of me trying to figure out what can manifest from the idea of rituals, cleansing and superstitions – I learnt a new language in relation to a particular material that extended beyond just the Indian community. After all, it becomes difficult to not fall into the trap of being that Indian girl who talks about Indian things and makes Indian works. 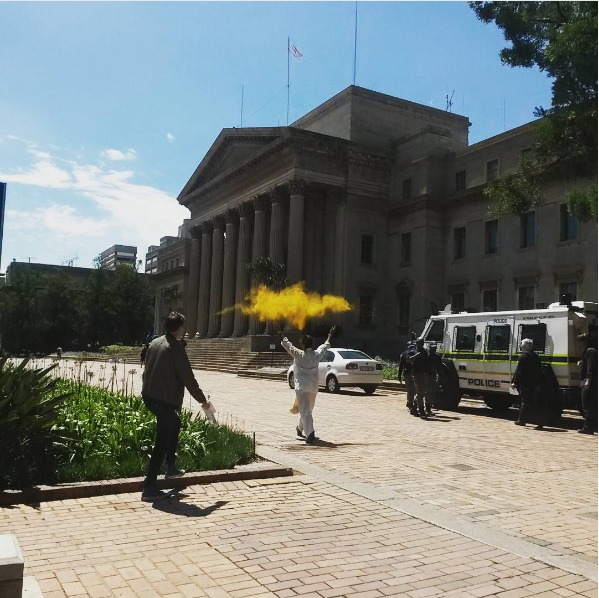 For my final exam, I presented a performance piece that dealt with the student protests and violence that was currently being experienced by universities throughout the country. I was dressed in a white shirt and white pants with black shoes. I had two bags attached around my waist with a belt. The one bag contained safety packs and the other contained a significant amount of turmeric. The turmeric powder served as a cleaning agent that figuratively and spiritually cleansed the body, mind, spirit and surrounding environment of bad omens, ill feelings and lifted the animosity and conflict that was thick in the air.

“I will say that this performance of ‘endurance’ pushed me more than ever to keep a straight face because of the comments that people passing by made and the way in which the cops got out of their vans, ready for action, glaring at ‘the last warrior’ covered from head to toe in turmeric.”

My performance piece began from the Amic Deck on Yale Road that led into Jan Smuts and ended at the Wits School of Arts. Each explosion of turmeric that was clapped between my hands marked a space that experienced violence and resembled the tear gas that so many students endured. My lecturers and fellow peers ingested the powder that floated in the air as they followed behind me and experienced the moment in a poignant and light-hearted manner because of the way in which it had been executed. I will say that, this performance of “endurance” pushed me more than ever to keep a straight face because of the comments that people passing by made and the way in which the cops got out of their vans, ready for action, glaring at “the last warrior” covered from head to toe in turmeric.

Moreover, the outcome of the performance made people feel better spiritually and lifted the anxiety of being surrounded by the police daily. I distributed the safety packs once the walk was over and left without a word. 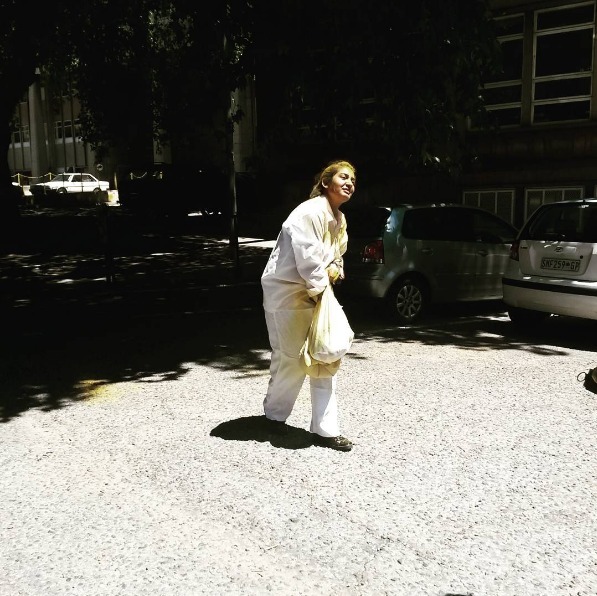 You’ve said that your final project initially began through an investigation of your culture and the traditions that your family practice without question. Did the work offer up any further understandings of these traditions for you?

To be honest, I found understanding only in that which I researched. I still have a lot to learn. The traditions that are practiced are too many to tackle in one go. I believe, that as people, we need to always consider the situation as a whole and be CRITICAL in our reaction to the process.