16 Feb Merging the personal with the material: An interview with conceptual artist Brett Seiler

Brett Seiler is a Zimbabwean-born mixed-media artist whose conceptual work explores complex themes such as love, loss and queer identity.

Since graduating from the Ruth Prowse School of Art in 2015, the artist has dedicated his time to organising experimental pop-up group exhibitions in empty spaces. His pieces are often highly personal, revealing details of his life and engaging the viewer with expressions of universal emotions. Inspired by figurative language, Brett weaves words into his work in a way that feels almost diaristic. His interests include, creating spaces, temporary spaces, queering spaces, flowers, memories, nostalgia and the lovers he meets along the way.

Here, we speak with the artist about message and medium in his unflinchingly honest artworks. 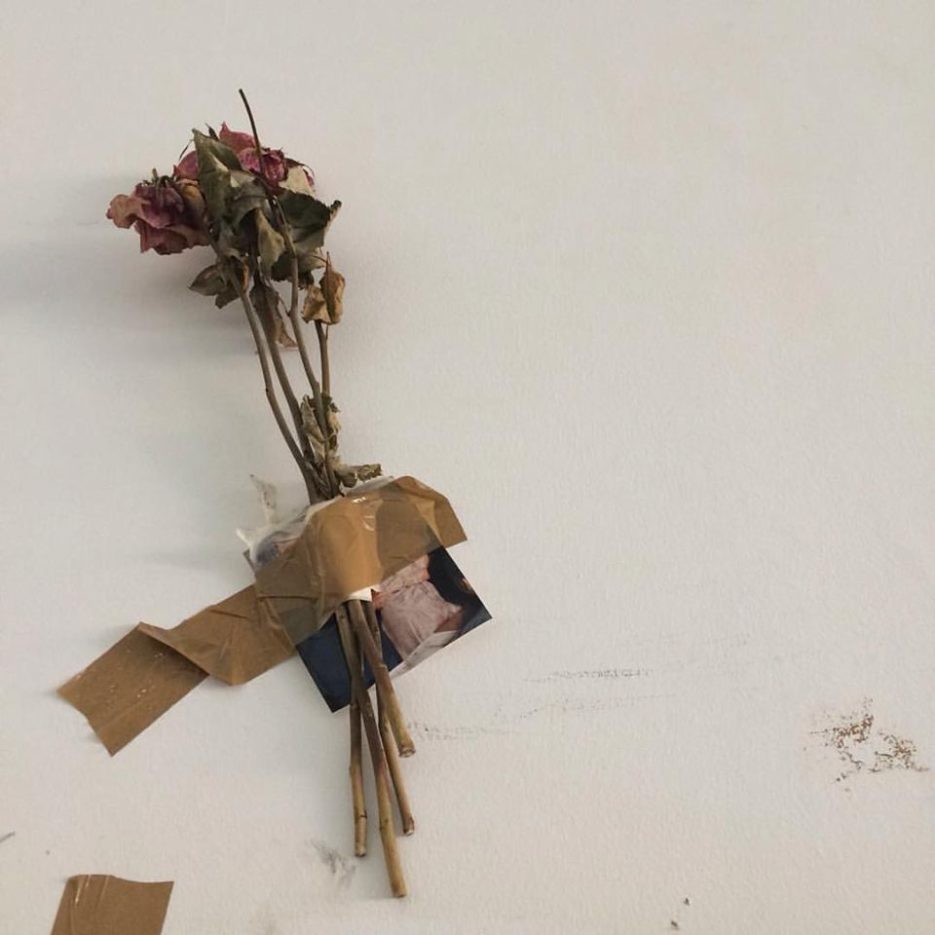 What’s one of your earliest memories of creating art? Was it particularly defining?

I am not exactly sure of creating work when I was young. I remember having drawing competitions with my sister in her room and then asking my parents to judge the work and then there’d be a winner. It was actually quite adorable now that i think about it,  but creating the work wasn’t really the defining point. The defining point was working and understanding how to read art, because I remember my mother would say something like,  “I really like how you used glitter.” I also think it made me value memories.

For The Man That Kissed Me In The Rain.

What mediums do you work in and why?

I work in many mediums, mostly things I find and come across walking around Woodstock and things people have given me – it really depends, if I get an idea, I would purposefully go out my way to find that one thing. Currently, I have a bunch of flowers and found photographs in my studio, they wilt and dry out and they still look beautiful. They have this distant idea of longing, wanting and survival. Then I feel bad because they die, so I guess these object come into my studio as a funeral. I think that is what is so romantic about found objects – because they hold stories and histories and when they eventually land in my studio, I try and re-purpose them which in itself is a sort of queerness, to give a new narrative of romantic gesture to discarded materials; I sit with objects and I try and figure out why they are in my studio, perhaps because I am sentimental and struggle letting go of things. I have a few objects that remind me of school, such as desks and books, text books, chairs, chalk e.t.c, I work alot with ‘school’ since it was a place where homophobia was distilled.

Could you share a bit about the tone and content of your text-based artworks? What attracts you to the written word and what led you to start using language in your work?

In my graduation show, I wrote over this wall in a very small text. It was a process of getting things out of my head. The text was actually quite direct, but I have become more ambiguous and less straight forward with my text – because I started to feel really lost and anxious about what to say. They are often words, sentences and statements that are in despair or hopeful. I read a great amount of poetry, even more so that my love of poetry has progressed and now influences my work. People like Frank O’Hara, Eileen Myles and Joe Brainard who all wrote with a sense of immediate nostalgia and loss (which my work does). I have one piece where it reads out ‘You Were So Fucking Beautiful‘, and it directly deals with people I have lost, people I still wish were here, family, friends and lovers I wish were around. So there is this longing I have created, I think it’s quite idealistic and ironic because it feels blurry and like an illusion. A lot to do with the condition of romantic love. I also have a text piece where I repeated ‘Dear Zimbabwe, I Am Sorry I Am Gay’ for three meters – which references the high school punishment of writing lines and furthermore, highlights the anti-LGBT+ laws in Zimbabwe. 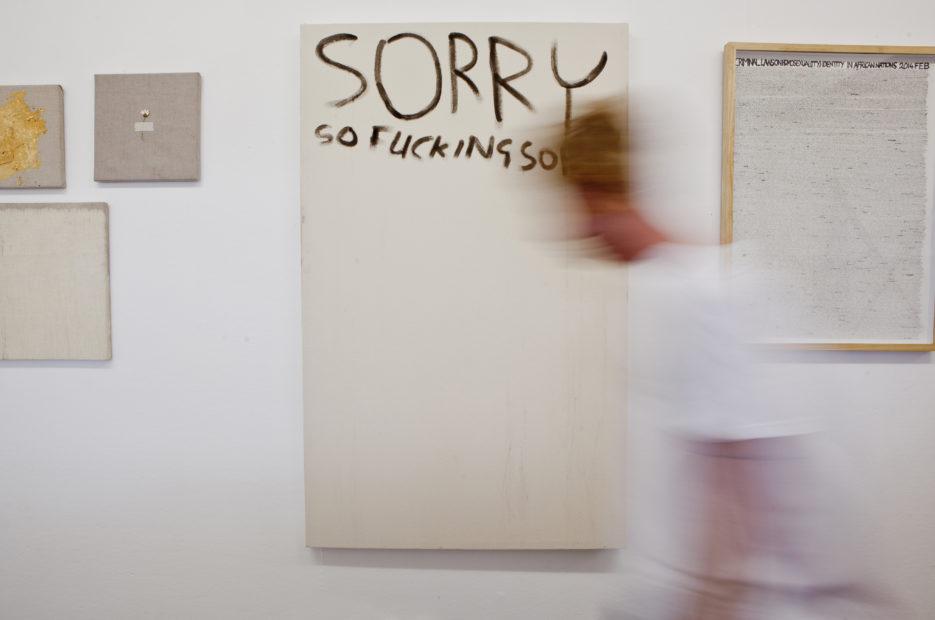 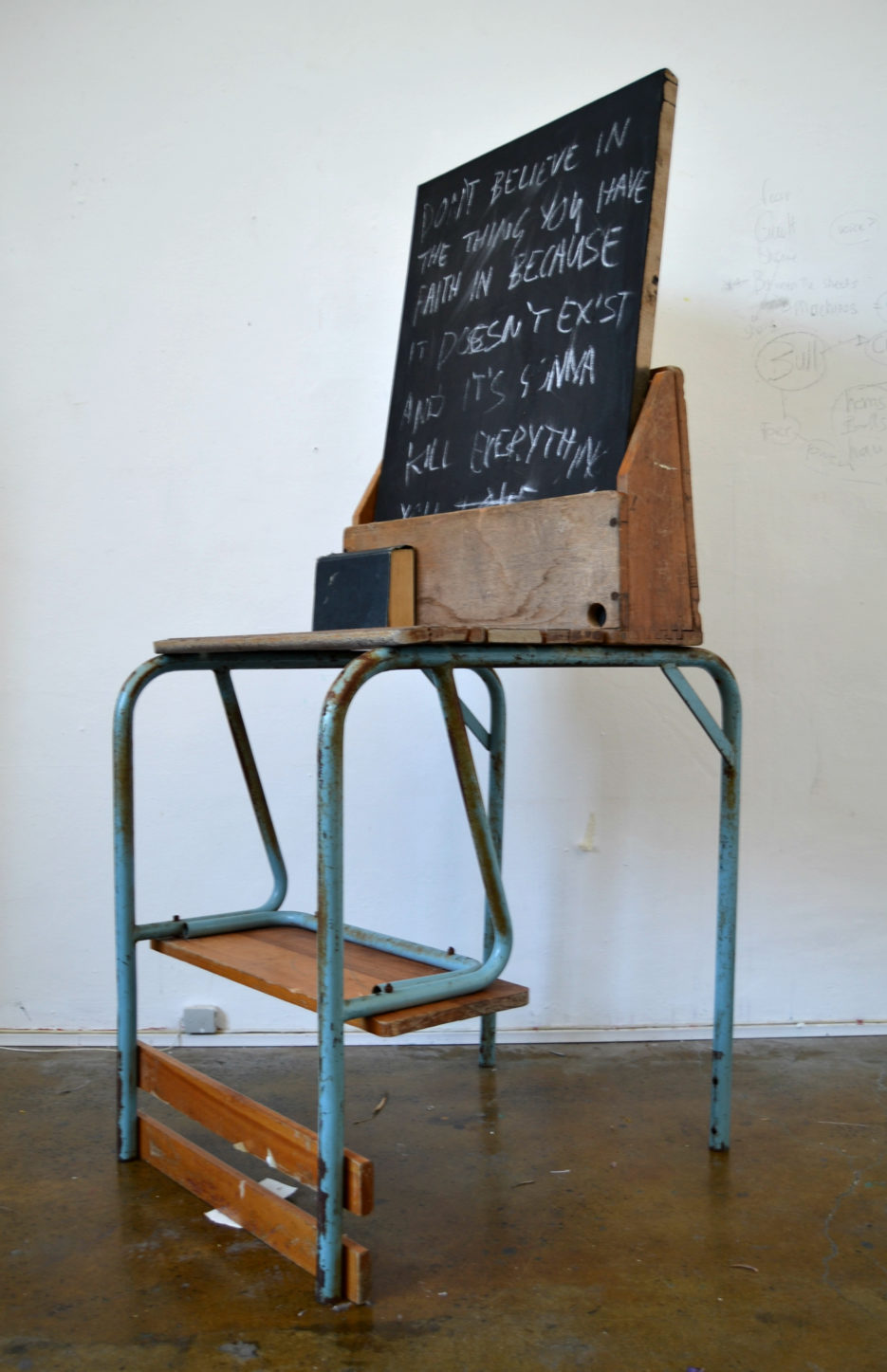 Back Of The Class.

What kind of art would you classify your work as being?

I am not sure, I have thought of this before. I often say installation artist but then again I often feel like I think like a painter. I don’t really like to classify my practice as an artist because it closes a lot of doors for me to experiment with new objects and media and I want to be versatile.

Your work has explored LGBT+ issues within the context of Africa. How does art help to better cast a light on issues like this and how much power does it hold to change them?

I do a lot of research on LGBT+ issues in Africa because when I first found out that homosexuality in Zimbabwe was illegal (when I was in primary school), it made me scared, guilty and I had a overall feeling of shame. As I grew up and realised I shouldn’t hold this shame, I wanted to find how and why these laws exist. I did a performance with my dearest friend Luvuyo Equiano Nyawose at the empty space in gallery MOMO (curated by Zenobia Marder) whereby he read out all the laws that protect and discourage the LGBT+ community, he would also explain how all the homophobic laws were old colonial laws that countries have kept and never changed and sadly reinforce them, and as he read them out I would type them out on the typewriter simultaneously, however I wouldn’t be able to keep up and the text would be a bunch of letters that wouldn’t make any sense. It sort of made sense to me then how queerness is perceived because I don’t think people really talk about it in other parts of Africa, it almost seems ignored. I believe the works about LGBT+ issues would hold more significance in countries where it is illegal which would highlight and bring forward that conversation. Over here, in South Africa, it feels like the LGBT+ community have very obvious things to change and even though we are ‘protected’ under the constitution, it feels like a facade. I would like to cast a light of LGBT+ issues in Africa, I would like for people to talk about the fact that only a few countries legalise homosexuality. 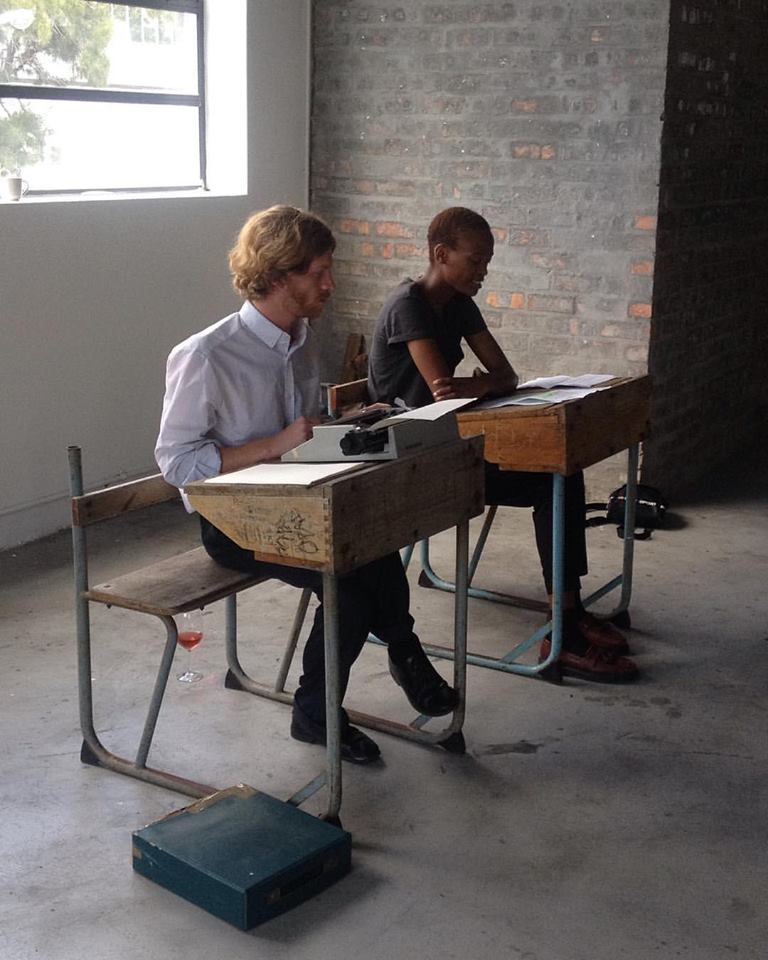 Who or what have been your greatest influences?

Felix Gonzalez-Torres has been a major influence for me as an artist and how I look at art. He was the first contemporary artist I came across that made work that made art about queer love with using everyday materials. His work was also profoundly political which has impacted me and how I perceive political work. Asides from him, I am influenced by poetry, my friends, lovers, the Kimberly Hotel, memories, nostalgia, flowers and philosophy. Also the colour yellow. 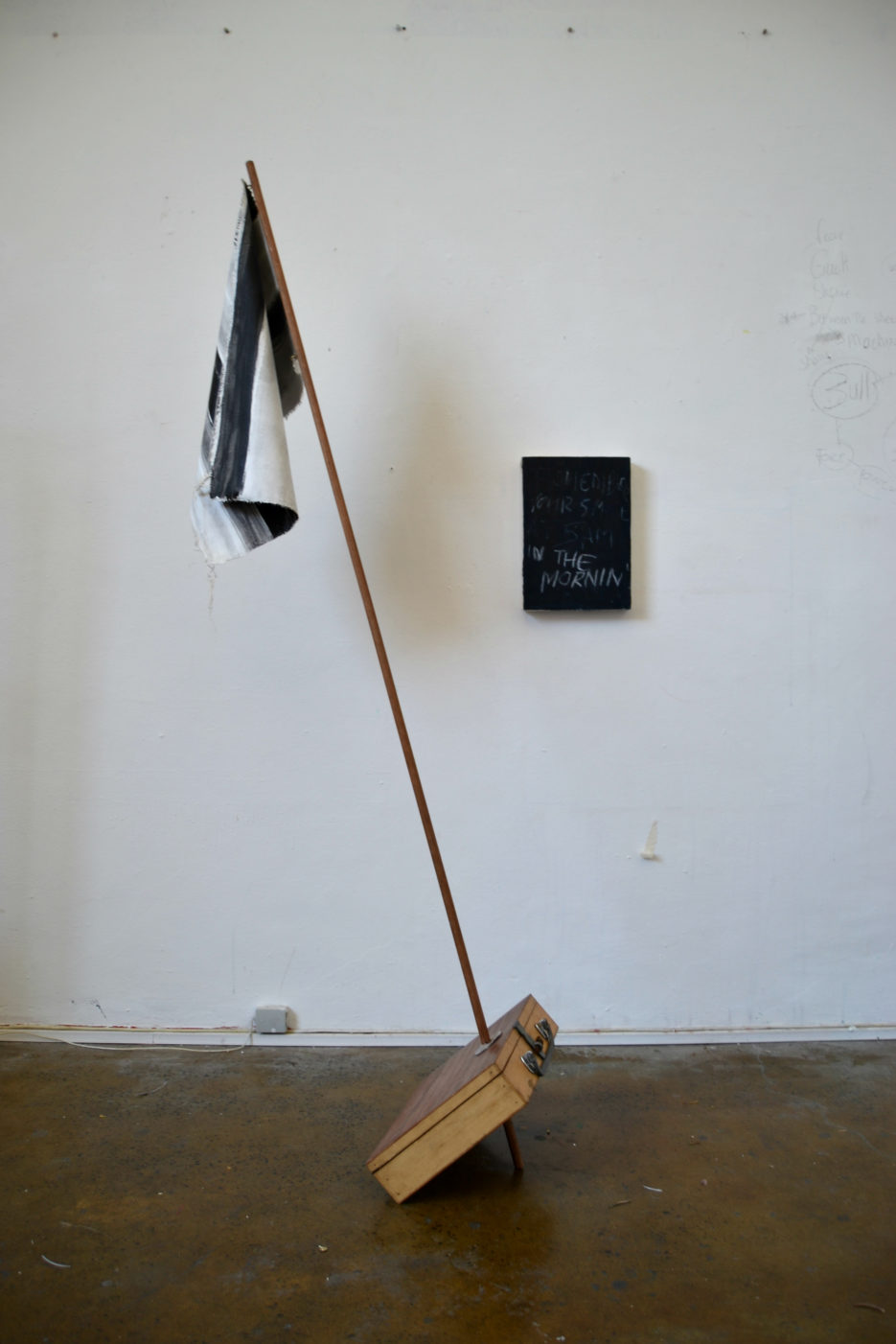 Untitled and Remember Your Blue Face at 4am in The Morning.

You are originally from Zimbabwe but are now living in Cape Town. Which space inspires and influences your work more?

It’s difficult to say. I think Zimbabwe has influenced my work in terms of wanting to make queer work, but Cape Town provide a space whereby I am not scared to make the work, especially having space to experiment and explore new media. I wouldn’t really say ‘space’ inspires my work but rather the current content of those spaces influence my work – like the people I am friends with here and the young artists emerging from Cape Town – and in Zimbabwe, having memories of childhood, or school. Also the idea of traveling from Zimbabwe to Cape Town has influenced my work. The story of migration and turbulence, of starting new journeys. I have this one work which is the gay flag, painted in black and white and through a painter’s suitcase. It was quite a difficult work to make because i have never wanted to strip the gay flag of its colour but quite important because I know that the loss and reason of leaving Zimbabwe was for that exact reason.

What is your favourite work that you’ve made so far and why? Could you recall the creative process involved in the realization of the piece?

It’s really difficult to choose one. I really like this one of a photograph of my parents at their wedding, it has roses taped to it and hides their faces. I made it when I first moved into the studio and it hasn’t changed (which says a lot since my work continuously evolves). The roses, the photograph and the tape just sort of landed together and it seemed like ‘fate’ in that sense. When I look at the work I think of the constructs of romantic love, of the death of my father, of the temporality of love, of loss, of poetry, of queer longing. It’s embedded with so much content for me but it is so simple which, for me, makes it successful. 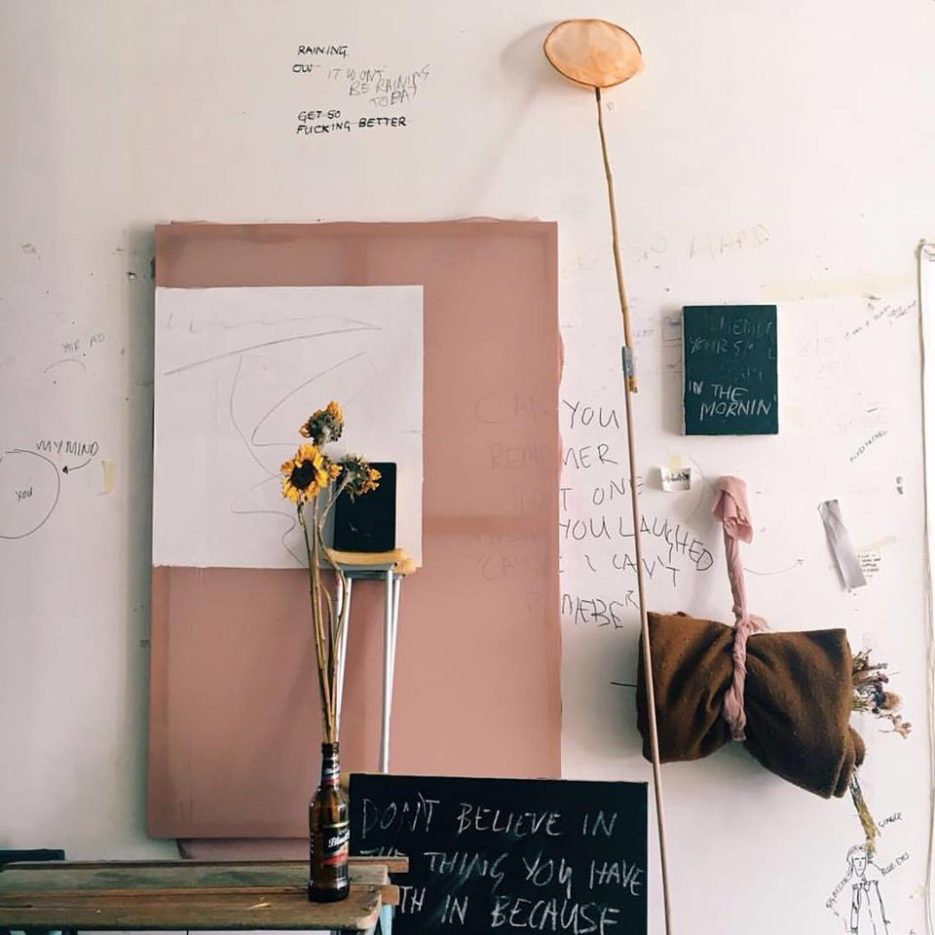