21 Feb ‘These Aesthetics Are Not New’: Introducing Callan Grecia

Painter, artist, DJ, fashion affioconado and all round digital duke, Callan Grecia explores the blurred, almost inseparable worlds of the IRL and the URL in his Master of Fine Art work, These Aesthetics are not New. The University Currently Known as Rhodes (UCKAR)  graduate interrogates the way we represent ourselves, the way we create art and ideas, and pours a heavy bucket of cold water all over the idea that there are new, groundbreaking ideas being made today. Through a series of rich, meticulously composed paintings, he uses his technical prowess, razor sharp intellect and internet savvy to create a body of work which speaks to anyone who exists on the interwebs. ‘

These Aesthetics Are Not New existed as a one-night only real life exhibition, and true to the subject, as an Instagram live experience too, with the option of purchasing merchandise after the exhibition. Callan speaks here on inspiration, frustration and his art-making process. 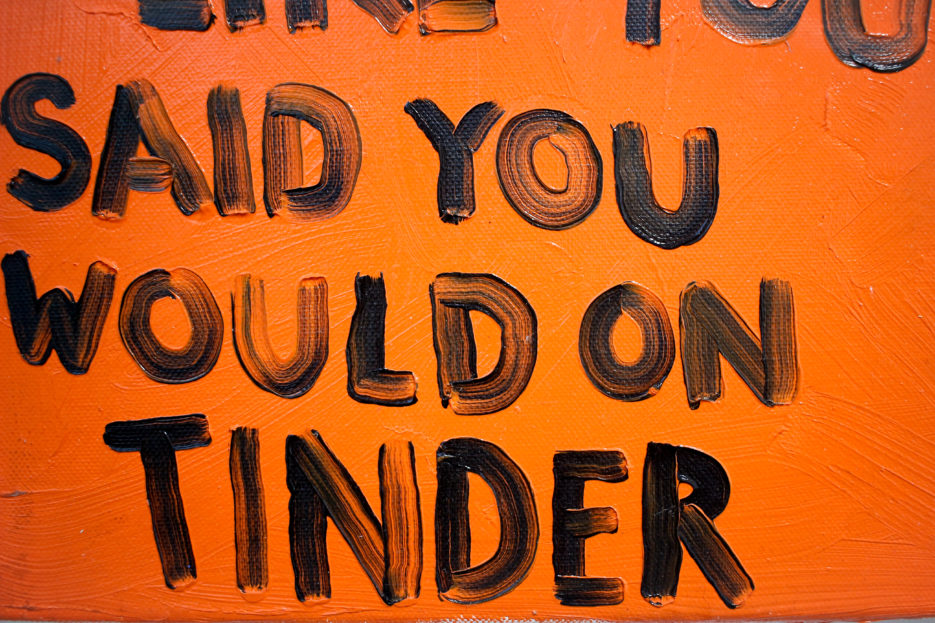 The title of your work is hugely powerful. What does the statement ‘these aesthetics are not new’ mean to you?

There are no new aesthetics in a Post-Internet era, only conditions affected by a networked way of life. Things are cyclical. Purely aesthetically you can see that in fashion, in art, in advertising. The thing is, with the Internet – an instantaneous form of access – the process speeds up and these cycles become either more visible or, amalgamated. The statement ‘these Aesthetics are not new’ was something me and my friend Tanya Poole threw around the dinner table fucking often, and it stemmed from listening to people assume that their work was something new to behold, that the work was somehow aesthetically unique in some way, but our ways of seeing are ingrained in thousands of years of visual literacy. The lexicon can be different and the visual cues can be subverted and incorporated with others, but they all come from somewhere. 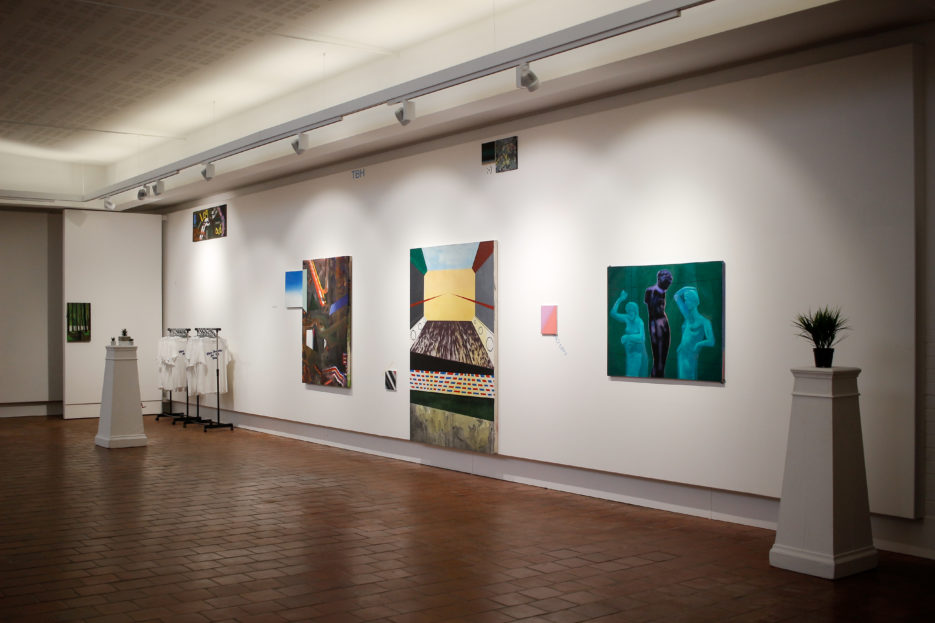 Considering that your work is in fine art and in particular, painting (considered to be ‘traditional’ as a medium), how easy was it to blend the painting medium into a digitally-based idea?

It was fucking difficult getting the language down. It’s not so much a digital idea as it is a digital condition that provokes questions in a physical reality, so I was working with ways of representation across two essentially different planes of representation. Getting the two to work across both or either or none was the task and again it was fucking difficult. You see galleries and people on social media document work digitally and share these physical objects online with the given that they will be viewed and the work will maintain its ‘ness’ but things change when you induct a physical thing into a digital thing. I’m just focusing on that slippage and trying to create a bridge using my painterly vocabulary and digital knowledge. I think I’ll be dealing with this stuff for a while because it’s crazy and I don’t think the answers will be apparent soon.

“The statement ‘these Aesthetics are not new’ was something me and my friend Tanya Poole threw around the dinner table fucking often, and it stemmed from listening to people assume that their work was something new to behold, that the work was somehow aesthetically unique in some way, but our ways of seeing are ingrained in thousands of years of visual literacy.”

What inspired and influenced you before and during the art making process?

Yeezy season 1 was wild. But I guess being immersed in digital landscapes from using the internet so often and being immersed in the discourse of painting. Seeing the convergence of digital aesthetics on physical spaces was the start of it. Seeing pixelated graffiti stencils and those fucking emoji pillows and shit. Also Instagram was crazy because I remember having to explain to Diane Victor and my class what Instagram was and why I was using it to find references for my second-year drawing project. It was so throw away and instant and skeuomorphic. It was like having a dark room (a shitty dark room) in your pocket as well as a digital archive of people and the things they do, the things they like and the way they construct themselves online. My head is all over the place so I can’t pin point a solid start or end, but the internet and technological progress got me good. 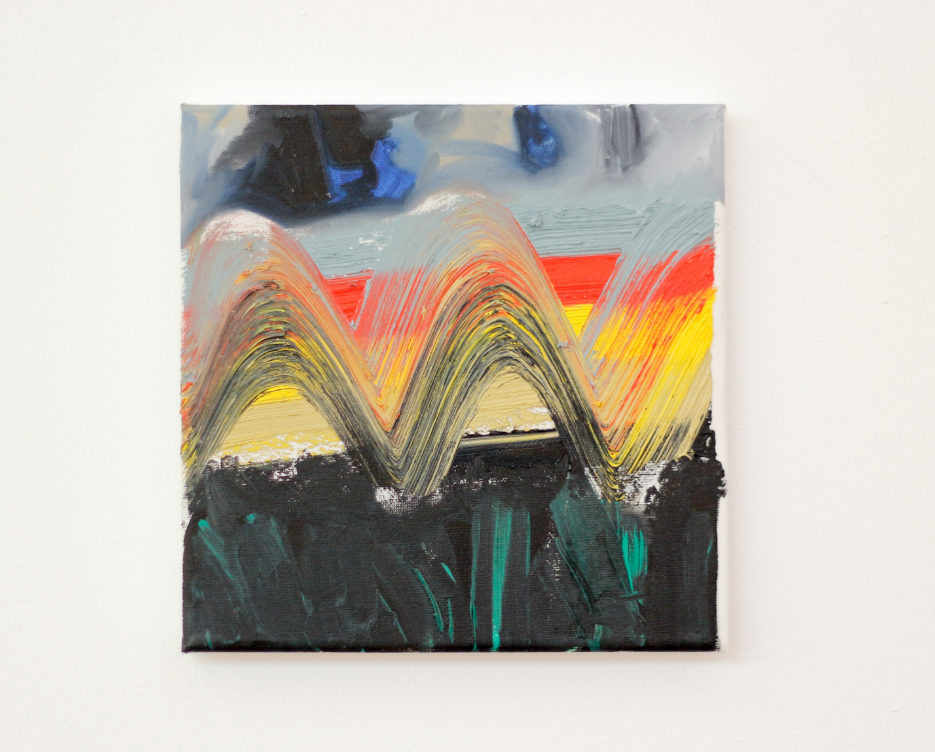 This work is academic in some respects – did that have any effect on your creative process or the way you presented it?

All my work is heavily theoretically based. I try find a 50/50 in conceptual concerns and aesthetic concerns. I love to read and the ideas I have are elucidated by the theorists I look at a helluva lot better than I could do. And it helps to simplify broad thoughts so I can focus them into the practical side of things. The theory informs pretty much everything, from palette to paint consistency to the final installation but it’s all background information in my head. I don’t go ‘Virilio said this so I will install this like this’ – it’s a more organic symbiosis between theory and practice. I’m a critical shit.

The exhibition was both IRL and URL in the form of a live Instagram video. Why was the Instagram-based exhibition an important part of this?

The live stream was the instantaneous access I write and speak about through the painting. These paintings with digital concerns appear live to anyone who can access the stream, where you can take a virtual tour of the show without being there, where the paintings lose something or gain something because of the grain of the digital. I used vinyl lettering to create a base layer for the show. Then the paintings, some thin veneered layered work, some high relief, impasto works, which created another layer. Then sculptural works. Another layer. Then a sound piece. Another layer. Then the live stream. It was an exercise in layering and repetition, as well as using instantaneity to represent these physical objects. Vehicles of digital conditions. 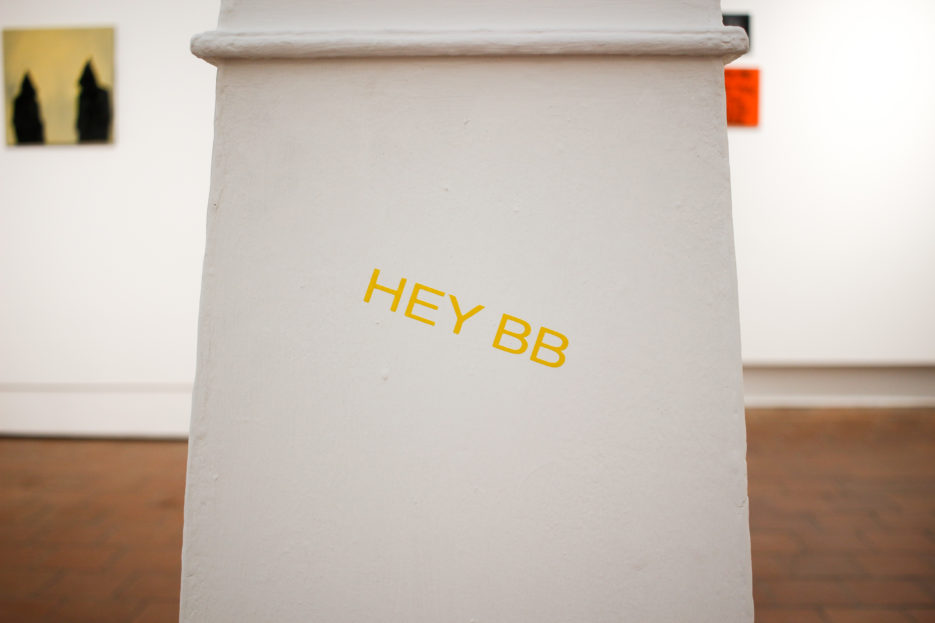 In your thesis you mention that “from the early 2000’s, the painted image and the digital aesthetic began to verge upon each other in both the physical and the virtual realm” – how do you see that manifesting in art and in the world you live in?

You see it everywhere. Pixelated paintings and drawings and graffiti. People using selfies as reference for their paintings and drawings etc. I saw it a lot as a junior lecturer, the newer the students, the more the digital grain was visible in their ideas and their works. There was this class that I took where every self portrait was cut off from the neck down. There was just a face and a bit of neck fading into nothing. The whole fucking class had done it but they’d also all had different conceptual concerns and aesthetic concerns to deal with, yet they were all cut off from the neck. How the fuck. Me and my friend Tanya couldn’t figure it out until I saw the vignetting on low light selfies as well as the Snapchat mask filters which put the spotlight on the users face. These ways of looking digitally manifested in their physical work which was interesting to see firsthand. 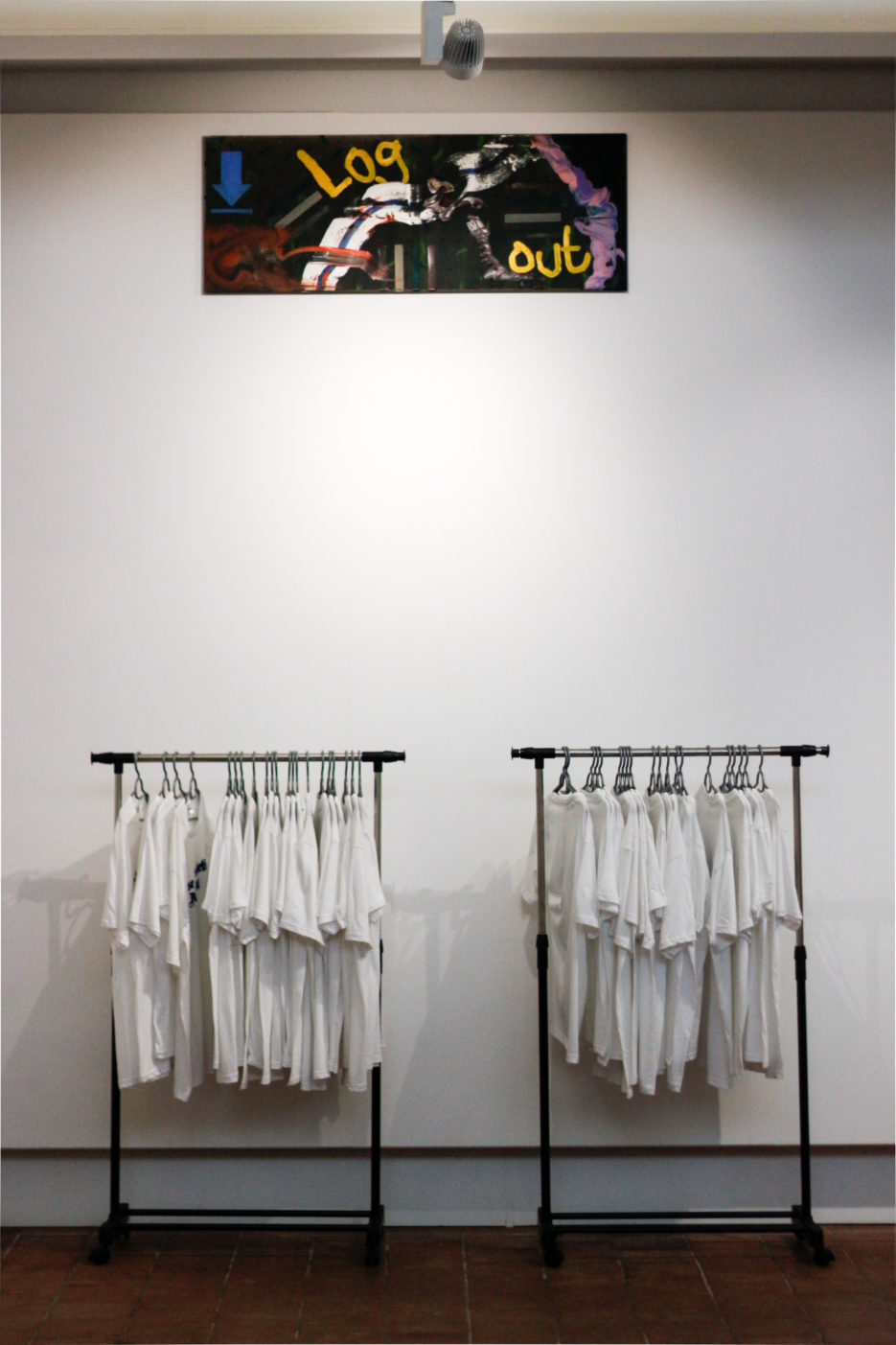 Besides making a set of arguments, and making beautiful work – why did this project have resonance for you?

Basically it gave me the chance to explore a multitude of ways of seeing and ways of representation. The processes leading up to the show had me experimenting with painting, photography, design, video and the use of textiles which was an amazing experience in that it allowed for so much to happen. It also put forward my ideas of nothing being new into the world and that was integral for me. Having a pop up exhibition with 6LACK banging in the background and some cool paintings and exhibition merch in the ‘progressive’ UCKAR Fine art department was pretty lit as well.

“I like painting Jordans, listening to Hellion, hunting for palace shirts in jam for 40 bucks and watching people punch nazis on YouTube. It doesn’t mean I’m a shit artist, it just means I’m interested in something and we’re diverse. People need to chill on that pigeonhole shit.”

What did you learn about yourself in the process of making this body of work?

That you get a lot of shit for not exploring your ethnicity or being political in the ways that the institution wants you to. I’m Indian and I’m interested in the internet. I have my politics and they are visible if you look at the work but they’re not the focus. And when my ethnicity and politics are not outwardly prominent, but my interests are, I get told to fuck off and I’m not taken seriously. Not just by the institution but also my contemporaries. An MFA is also not playing, but the experience was good for me. Now I can make what I want. That’s the best thing I learnt from the whole process.  I’m fallible and human and I make mistakes and my politics are probably fucking hypocritical and confused but I deal with that as a person and not as an artist. I’m sure my colour will come up in work along the line but right now I like painting Jordans, listening to Hellion, hunting for palace shirts in jam for 40 bucks and watching people punch nazis on YouTube. It doesn’t mean I’m a shit artist, it just means I’m interested in something and we’re diverse. People need to chill on that pigeonhole shit.

What’s next on the artistic journey?

I’m going back to Durban to paint full time. I’m hoping to have a solo ready for Jan 2018. I might also be going to Japan for a few months to network and do the shitty business things you need to do to get some tenure. So yeah, I’ll be painting full time, meeting people and trying to survive the big bad art world by making the best work I can possibly make. I just want to make the best work I possibly can, live in relative comfort and be able to afford good food and Jordans. If I can live comfortably as an artist and produce work forever I guess I’ll have made it in my eyes.

Binwe Adebayo is a black girl bomb with too many ideas, sneakers and bookmarked Kanye interviews.
She is a sometimes journalist, who has written for City Press, Dynamic Africa, The Con and AfriPop amongst others. By day, she is the lead Creative Strategist at Retroviral where she cooks up campaigns and makes weird fashion analogies. By night, she dishes out nice girl clapbacks on Twitter @BinweA

Callan Grecia, painting, These Aesthetics Are Not New