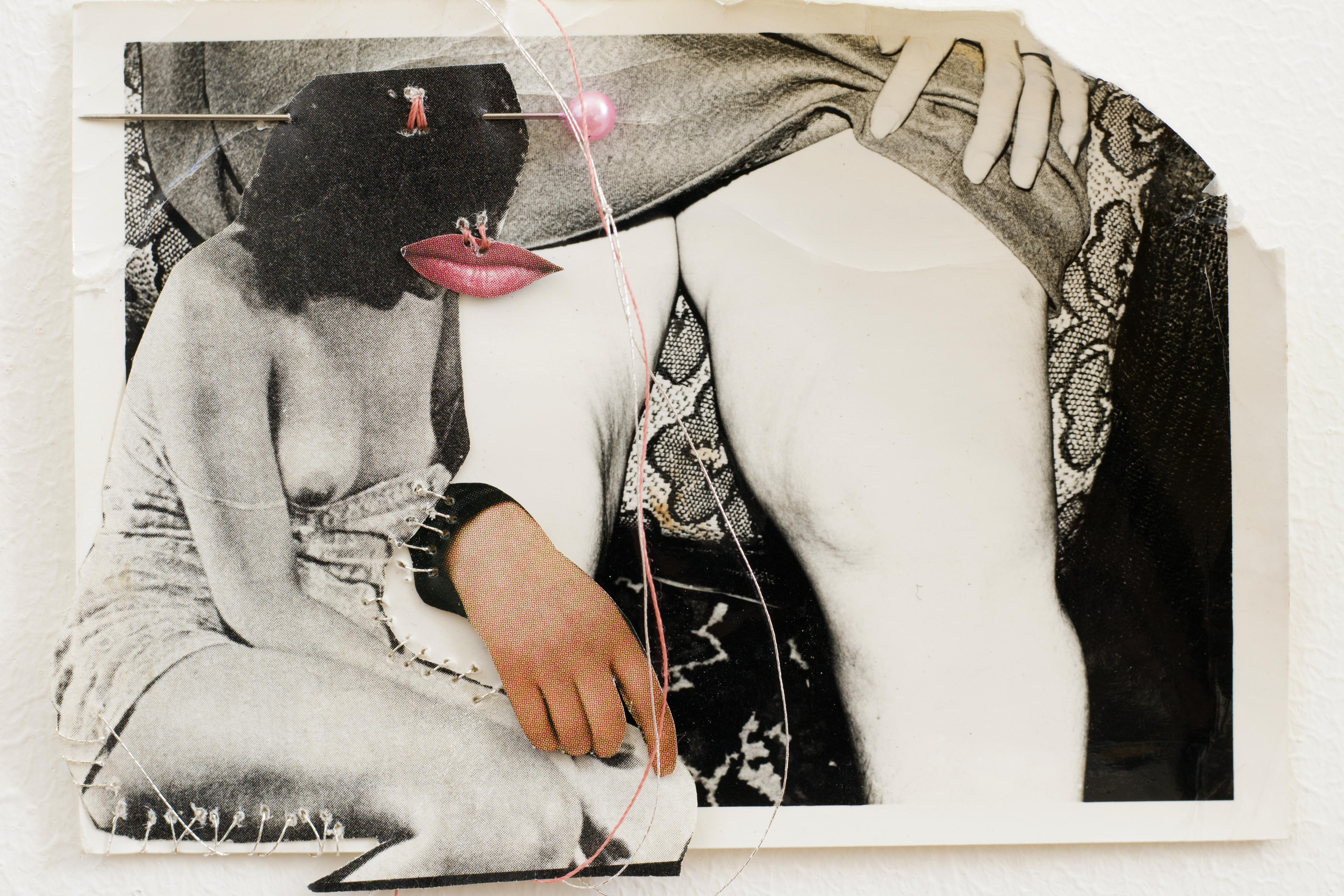 Posted at 11:20h in exhibition, Photography by Nikki Zakkas
0 Likes

Jessica Holdengarde graduated from Michaelis School of Fine Art this year. Her graduate exhibition, titled A room of my own, was a series of surrealist collage works. There is a feminine subjectivity to her art, which explores conceptions of the self in relation to the patriarchal social system.

The young artist deploys digital photo-montage and hand made assemblage techniques to create her dynamic pieces. She re-invents and re-arranges female historical memory in an aesthetic sense through a process of cutting up and sewing together formerly unrelated images and ephemera. The out-turn projected is a fantastical world of juxtaposed shapes, forms and scenes.

We spoke with Jessica about the inherent nostalgia in her work and practice and her journey towards becoming an artist. 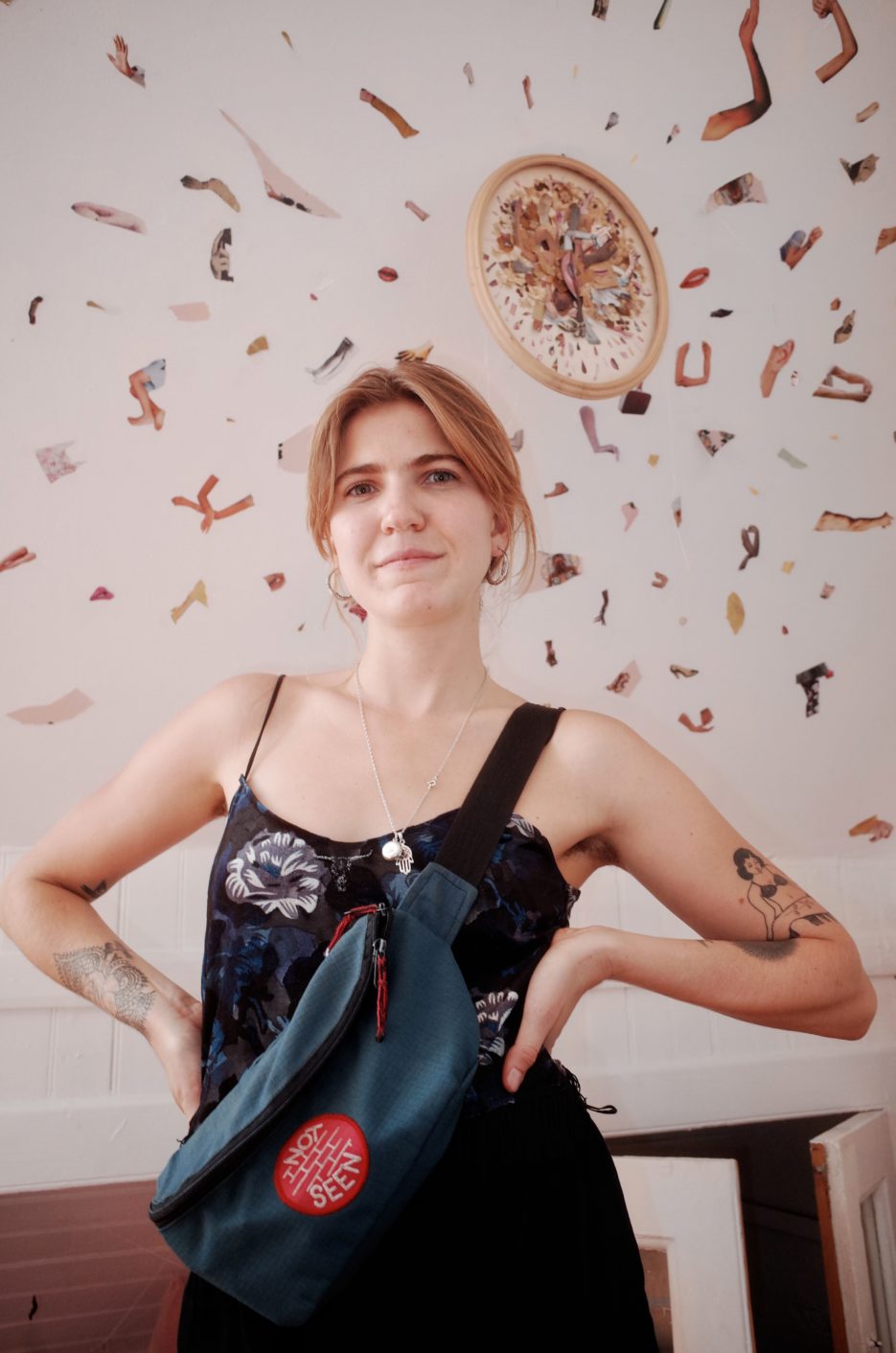 Tell us a bit about yourself and where you grew up.

I grew up in Kommetjie, a coastal area of Cape Town. I lived in London for some time after I finished high school and returned to Cape Town to study at Michaelis. I do lots of odd jobs in-between my own work, mainly teaching photography, pottery or art at various different colleges or schools in CT. You’ll probably see me behind a bar every now and again, I’ll pick up odd jobs in order to fund material for my works.

Have you always had an affinity for art? How and where did your creative journey begin?

I really like this question, mainly because I think about it quite often. I think I’ve always had a passion for curating a space. When I was younger I loved to decorate my room, paint it different colours, rip and cut out magazines adverts and paste them on my wall. It was all about creating something that I could enjoy visually and feel stimulated by. It’s funny, because I still love doing that. I seem to have incorporated this idea of curating a playful space as part of my recent work.

“I think family photos are really strange, and sometimes quite uncomfortable to look at when they are not yours. I also just found these junk stores so exciting and stimulating. The collecting of photographs moved into magazines, postcards, letters and various remains of these untold stories.”

At first, I thought my creative journey began at school, but I felt quite constrained by the rigid and conservative teaching of art or actually most of my subjects. So, the most poignant reminder of when I knew I wanted to work with imagery was when I was given an old film camera. It was a Canon AE1, which I still use today. I was working behind a coffee kiosk in Carnaby Street and was given this camera by one of my regular customers who was the costume designer for Harrods. Totally eccentric! He said he wanted me to have something that would keep my “creative self” stimulated because he had apparently seen me writing and drawing when I was bored. Sounds so cliche, but that moment for some reason has stuck with me. At first I was actually offended, I found his assumption of my creativity intrusive – but maybe that’s because he was right. Once I figured out how to use that camera, I never put it down. It’s actually what inspired me to major in photography. 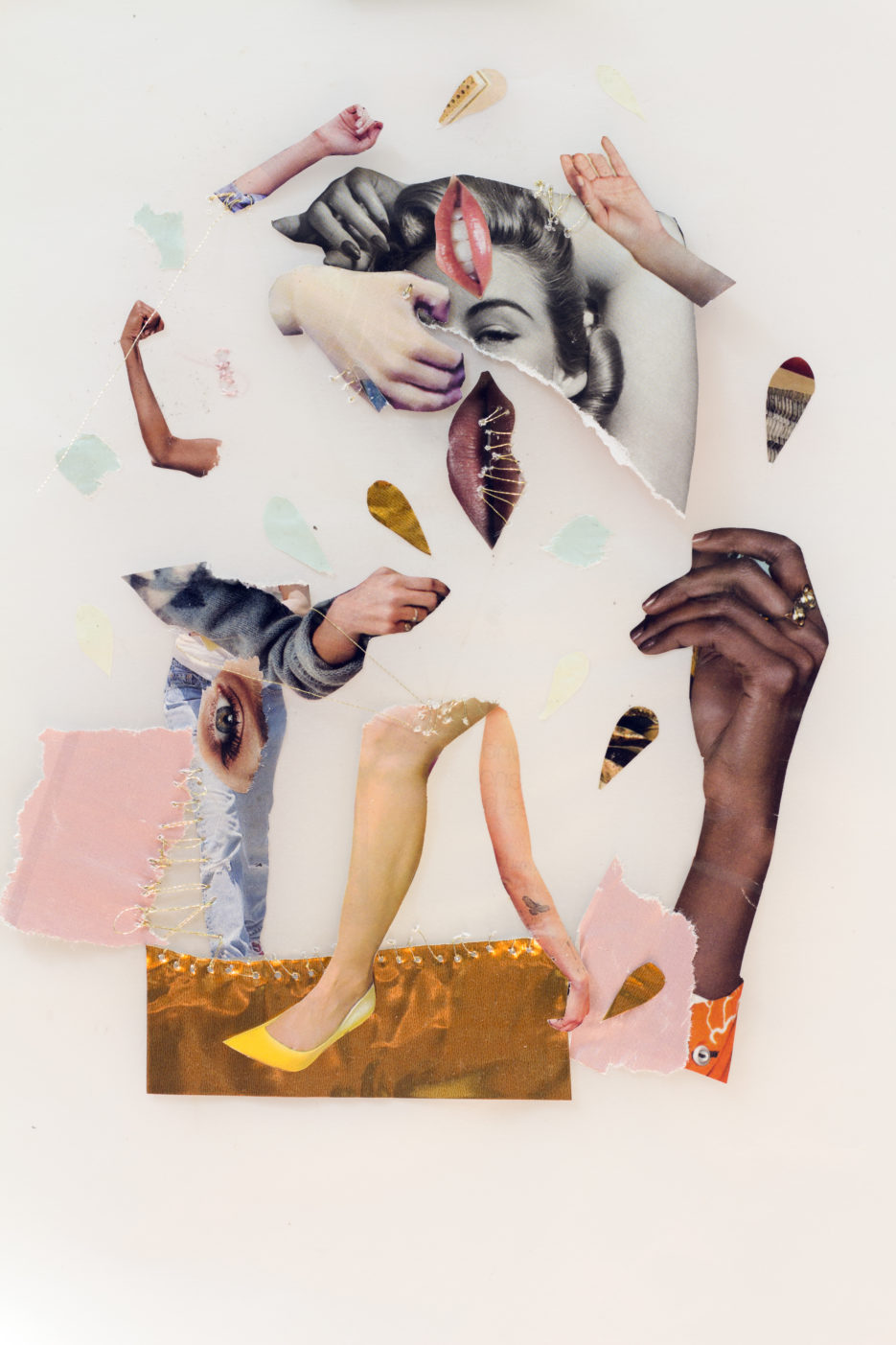 ‘Sincerely, dancing, but your hands remain and that’s the thing’, collage on tracing paper, 2016.

What inspired your first forays into collage? What appeals to you about the medium?

A few years ago I had started to collect photographs from various junk stores across Cape Town, fragments of imagery that stimulated a specific narrative. I was intrigued by the sentimentality of the object, why I wanted to hold onto this fictional representation of memory. But also the mass of discarded “memories” that I found in these junk stores and flee markets. It was just waste. I wanted to delve into the idea of nostalgia, and challenge the fictional representations of the past as well as the conflicting “happy” memories of my own. What was different about these images, what was missing? I think family photos are really strange, and sometimes quite uncomfortable to look at when they are not yours. I also just found these junk stores so exciting and stimulating. The collecting of photographs moved into magazines, postcards, letters and various remains of these untold stories. I think the collecting of images speaks to the visual quality of memory. The objects tug at the remembrance of a past experience. I think the collecting of these “remains” reflects a performance of my own practical memory. The re-arranging of them becomes a curatorial performance. A mapping of the psyche in order to understand it. Then I started cutting, re-arranging and sewing the images back together – it was an extremely cathartic process. I started mixing my own photos with others, mixing magazines and things like wallpaper from different time periods, using fragments of my own poetry with that from others to stimulate a visual narrative. Collage is such an exciting medium, it’s playful and honest. I often feel like a child, playing in my room.There is also something that seems to happen on the subconscious level with collaging – the ripping and cutting allows for the emergence of a narrative to present itself. I see collage as the luminary representation and expression of an idea/memory/feeling that doesn’t fit in the sometimes restrictive modes of linear language/time or representation. 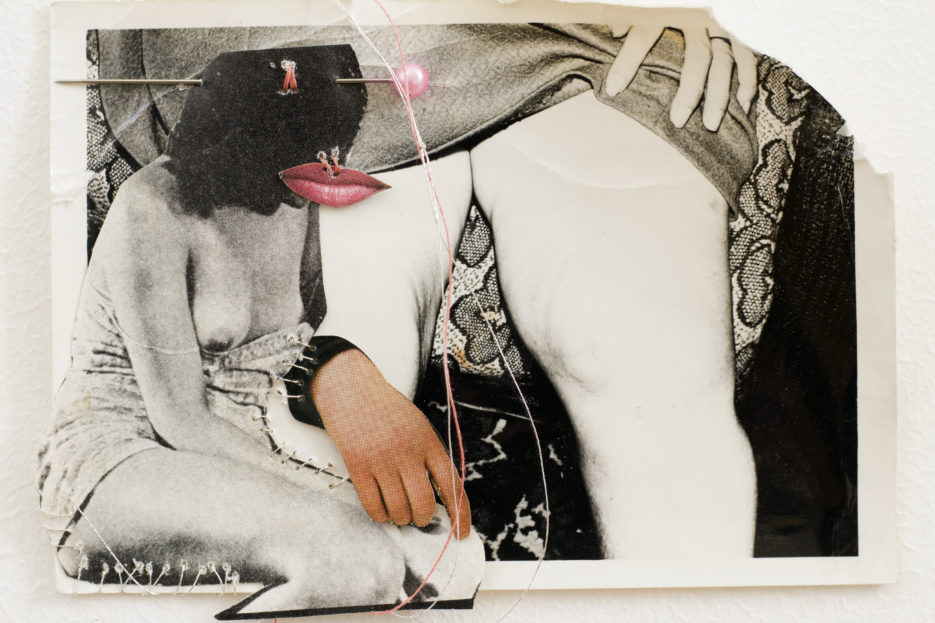 ‘While you weren’t looking at my irrationality’, collage on found photograph, 2016.

‘Anything beyond the gap between my thighs’, mixed media collage, 2016.

Making your collages must be an incredibly long and intricate process. Can you talk us through it?

I mean, It starts with the collecting of materials – which is the beginning adventure of the work. I’m often on the hunt for objects, imagery and a palate of things that jolts a specific feeling or narrative I wish to express. So I’m often in my own head before actually putting it all down. I then will work into a fully formed image or completely cut it up and re-imagine and arrange something new, seeing how things fit or if they need to grow and maybe fall off the page. Layering is a big part of it too, especially in the photo-montages – which I shoot on film, then scan material and montage digitally, then hand sew into after the printing process. So, to make it easier for myself I’ll often sit for a few hours every now and again and just cut up lots of little fragments of hands, arms, lips and shapes or anything that is a re-occurring image in my work. I try and have an array of fragmented resources when I actually sit down to play. The final end-point is the sewing of it. If I’m installing a work – like actually collaging the whole space – it can take up to a week or so of just playing in the space. I’m trying to work beyond the 2 dimensional restrictions of collage. So, yeah it is quite intricate but I love it. 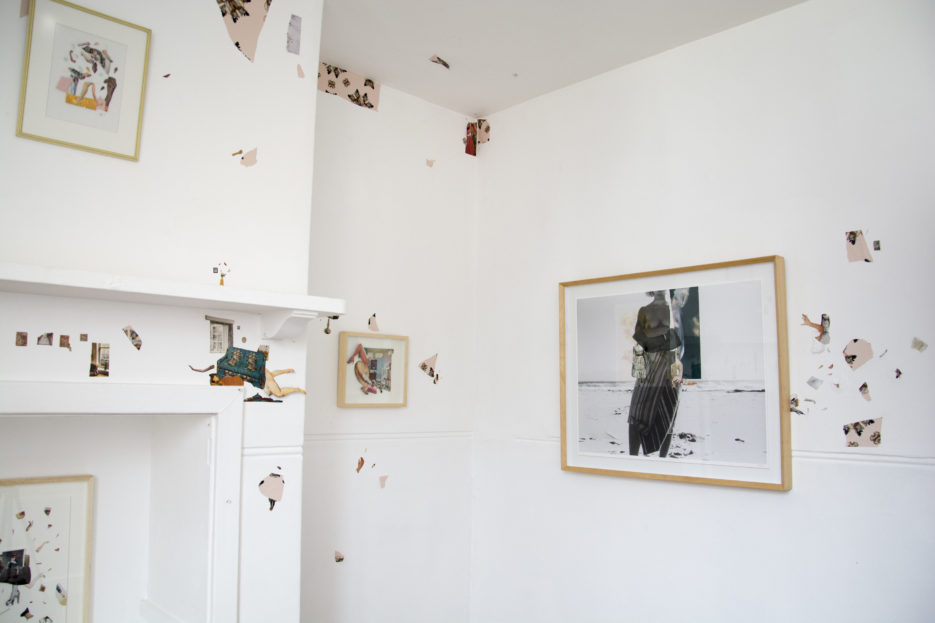 Who or what are the influences that shaped your graduate show exhibition?

I had just finished reading and studying the lecture series, “a room of ones own” by Virginia Woolf and was intrigued by the argument of creating a space that existed beyond certain confinements of thought in order to fully create or write fiction. I found the notion of the non-interrupted space very interesting and worked at creating a “a room of my own” (which is the title of my show) in which the “non” rational story could emerge through the process of collage. Whilst being intrigued with this concept of a room of my own I started to investigate the therapeutic effects collage had by hosting mini-workshops with some of my friends. We would sit in my room, cut and rip through magazines and photographs. Slowly, stories of our personal traumas would manifest. A fragmented memory-scape of collaged experiences. These workshops brought to light that the stories of the womxn in the room weren’t that different from one another and we had found a space in which we felt safe to express them. So my inspiration came from a concept or idea within literature but also from the people who are close to me. 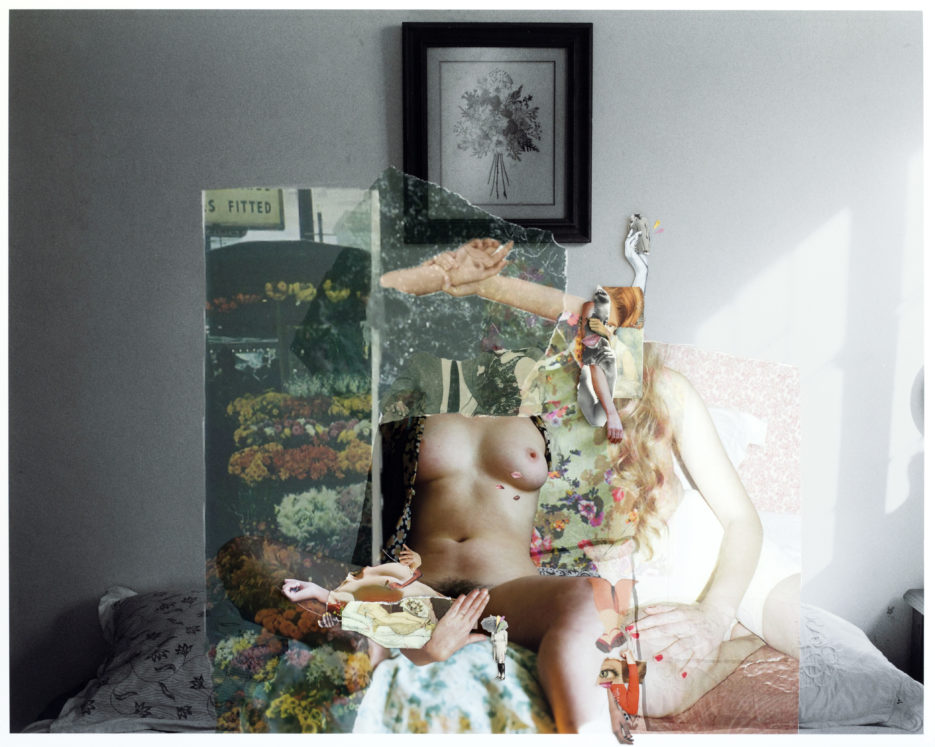 ‘The night became a blur, poignant reminders and their words of recognition’, mixed media photo-montage and collage on Hahnemeule, 2016.

What is it you’re trying to say with your most recent body of work?

Wow, so many things – but mainly to bring to light the need to play in order to work through certain modes of thought that need deconstructing. I was working through some of my own personal experiences and traumas that I didn’t wish to rationalize to an institutional system of patriarchy. Creating this room of collage was essentially creating a space for myself in which my medium of work began to investigate my past and how I remember it. I perceive collage as performative, the cutting and ripping technique acts as a medium that removes the layers of the subconscious while creating a counter discourse to linear perceptions of thought. I also was interested in the inherited violence that I believe is generational. Did we inherent ways of thought because the generation before us could not voice them, understand them and thus process them? In this respect, I wanted my work to attempt to defy the normative and inherited ways of looking. By cutting, ripping and rearranging the past in order to make sense of its remains as well as challenge them. The work attempted to bring to light, through my personal investigation of my own experiences, the need to criticise hegemonic systems of violence that still effect our social norms today. 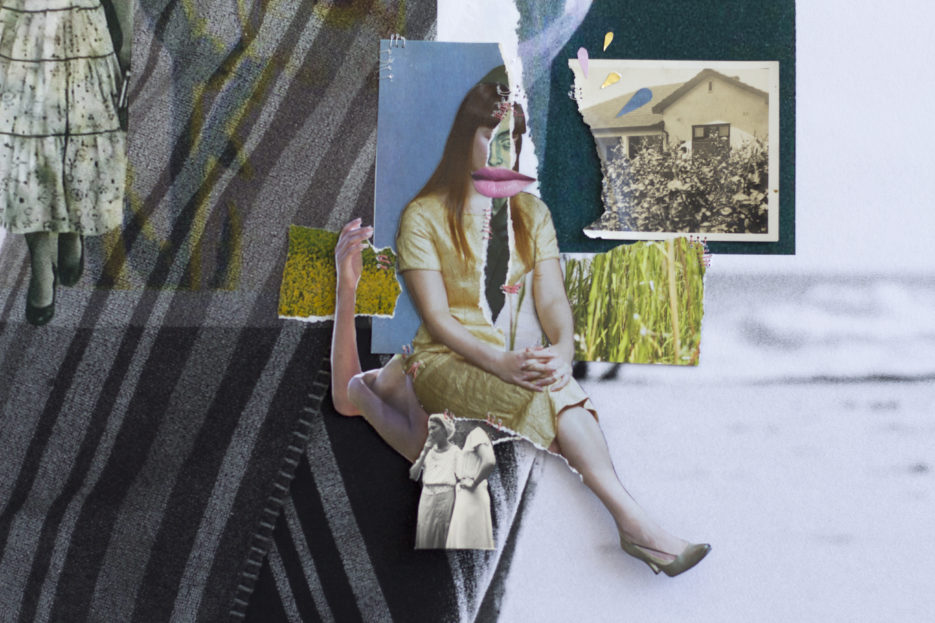 Close up of ‘House a body that stay breaking’ mixed media photo-montage and collage on Hahnemeule, 2016.

What’s next for you?

I’m quite excited to start working on a new body of work, and show some of my work outside the institution. I’m also excited to keep teaching, I think it’s a really valuable and important profession – I’ve learnt so much from the kids I work with. 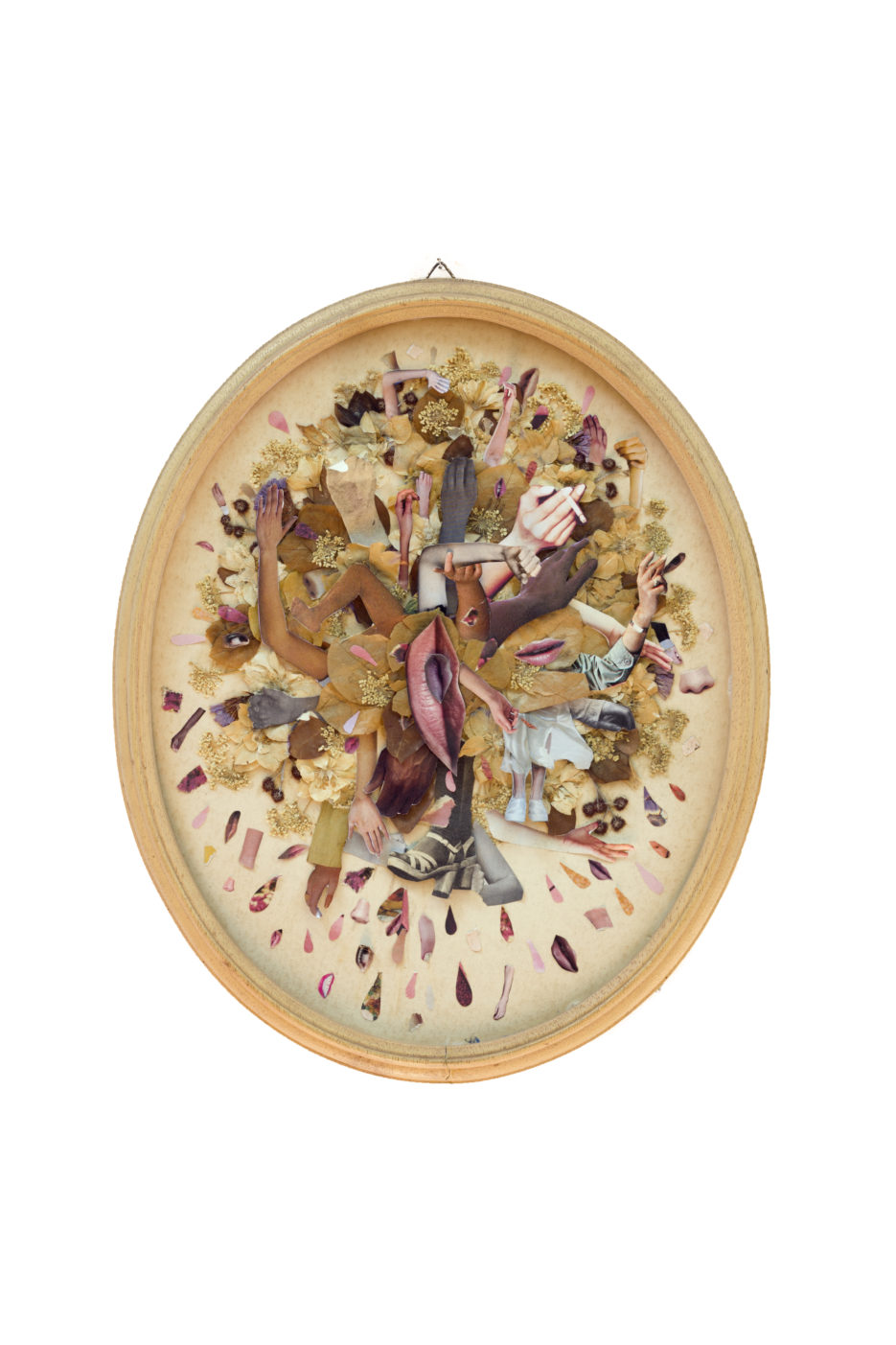 Like tears, back into my body, a wave of chaos and oh how fucking cliche, mixed media collage, 2016. 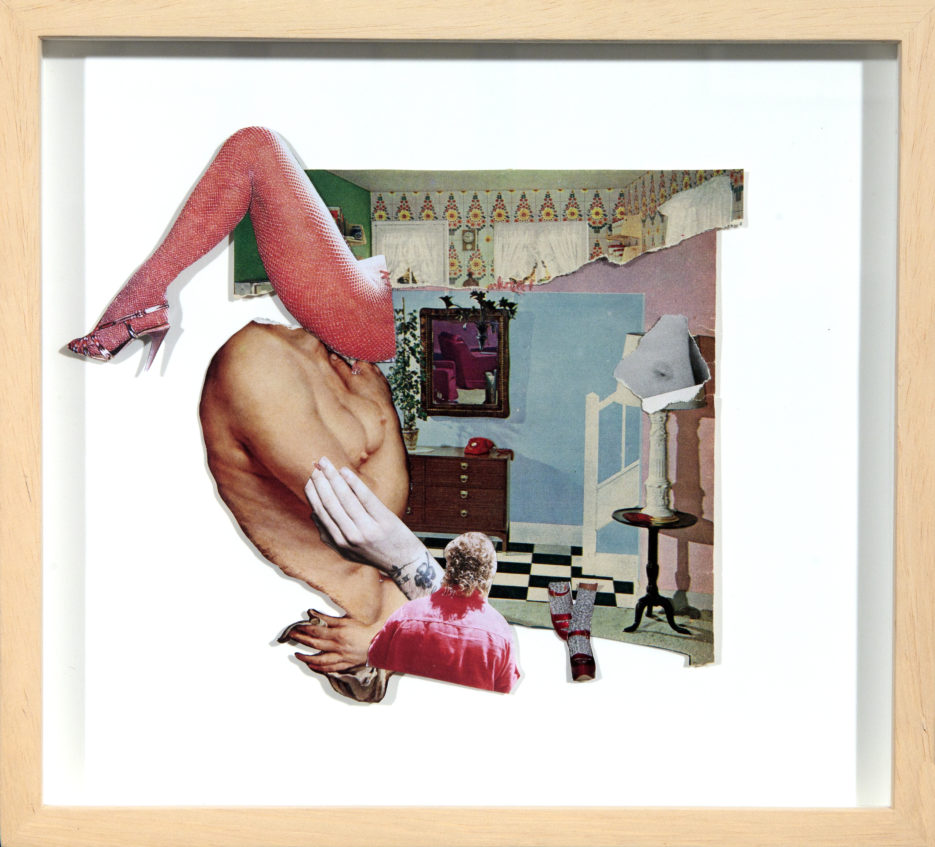 ‘This one night of seduction you text me and say’, mixed media collage, 2016.