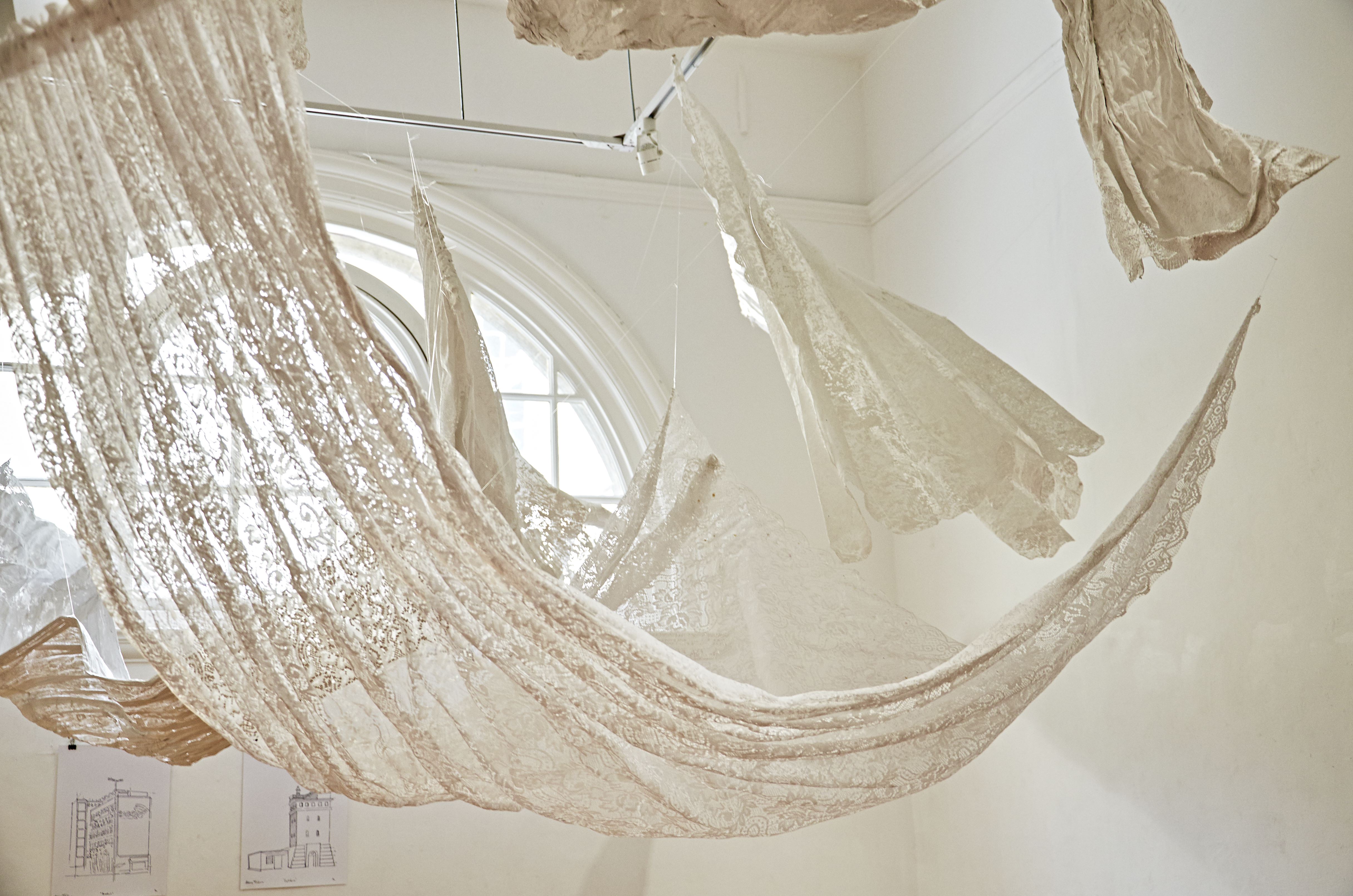 20 Mar My White Curtain: The moment that gave rise to a quiet poet

Nokulunga Zondo has been writing poetry since she can remember herself, but if you asked her to fill out the ‘occupation’ question in a form, she would answer that she is a ‘clinician nurse practitioner’. Like many poets, she writes for the drawer, and her colleagues don’t even know that her talent and passion lie in words.

I discovered Nokulunga’s poetry by chance. It was three years ago, when I briefly stayed in a flat in Sea Point, Cape Town. While drying my red umbrella one Saturday morning, I was told by my housemate that it is forbidden to hang anything from the windows of the flat. She added that the building regulations go as far as dictating that all the curtains must be white. Rebels with pink or blue curtains will be fined. Later that day, as I walked along the promenade I noticed that all the buildings, with thousands of windows and balconies, had only white curtains. It was there before, but never caught my attention. 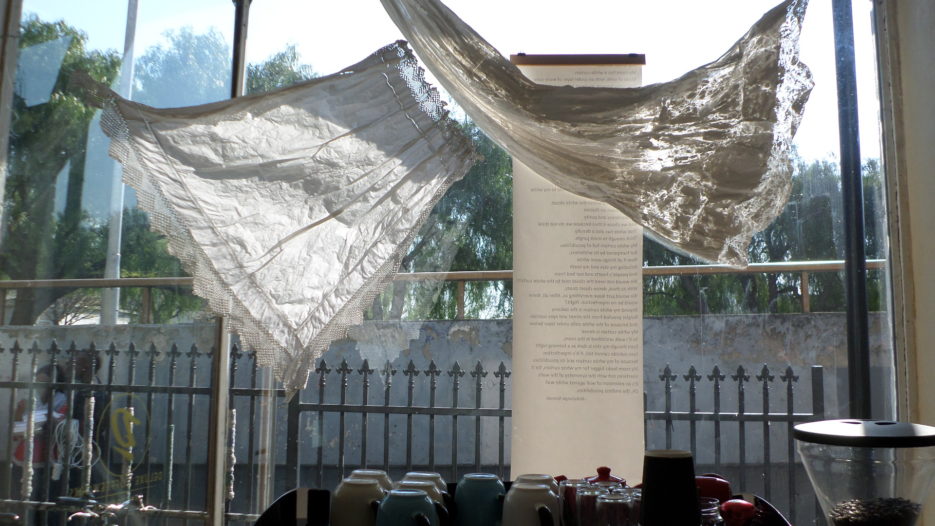 I was fascinated by this phenomenon – how a complete neighborhood agreed to have uniform curtains. And choose such an ironic colour, that has a strong political meaning. I wanted to find out how it all started: was it a municipal bylaw; what was the reason for such a petty regulation? I could find no information, but my Google search led me to a poem, published on an online forum. Titled ‘My White Curtain’ it was a beautiful and critical reflection on the philosophy of white curtains. The name of the poet was Nokulunga Zondo. I decided to contact her, and she responded warmly to my Facebook message.

The conversation developed, and a year later we met in person at the opening of the ‘White Curtains’ group exhibition that was based on Nokulunga’s poem. Featuring five artists, it was held in collaboration with Visual Arts Network South Africa (VANSA), and hosted at an empty shop in Adelphi Centre Sea Point. It was accompanied by a colouring book and a video featuring the poem. Later the exhibition travelled to Michaelis Galleries and The Drawing Room gallery. Recently, a new book was published, White Curtain Diary, documenting this project. On 24-26 March the book will be showcased as part of the exhibition Booknesses: South African Artists’ Books at the FADA Gallery, University of Johannesburg. Below is an interview that I did with Nokulunga for the book, looking back at this unexpected journey of one shy poet. 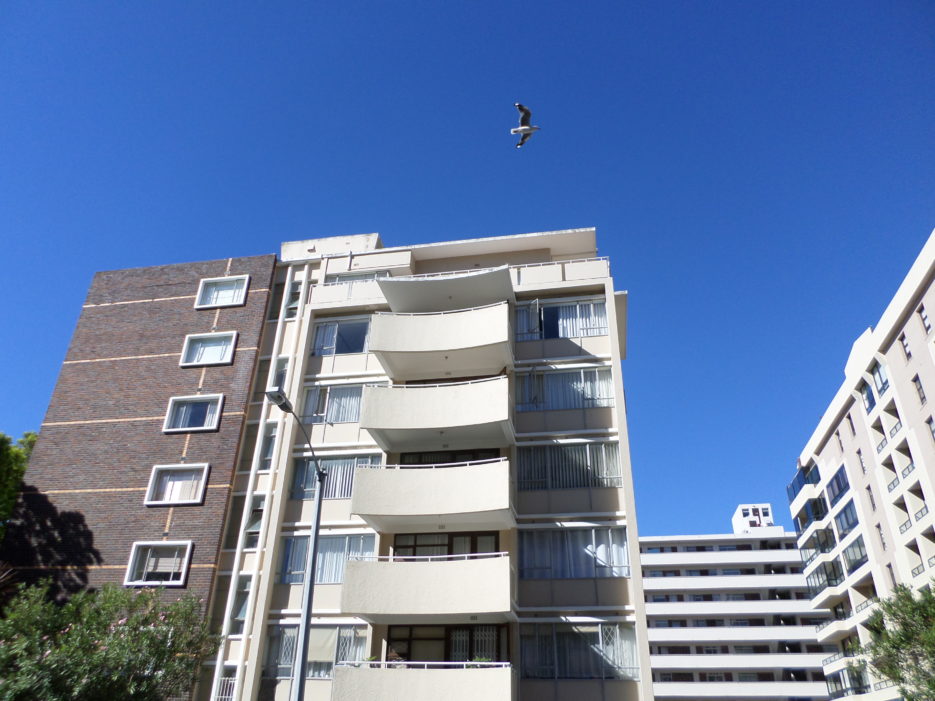 What inspired your poem?

I was living at the time (in 2012) at a block of flats in Bloemfontein, Navalsig, and had hung my laundry on the balcony because the place where we normally hung laundry was locked up after hours and on weekends, when I was mainly at home. So I rigged my own makeshift hanging line, and a few days after that, I received a letter from ‘Body Corporate’ telling me that this wasn’t allowed. They also commended me for using white curtains in my flat, and went on to say they were going to communicate to the rest of the flat occupants to do the same! I was very angry, but since body corporate was a faceless person whose address I didn’t even know, I vented in the best way I know how…words. 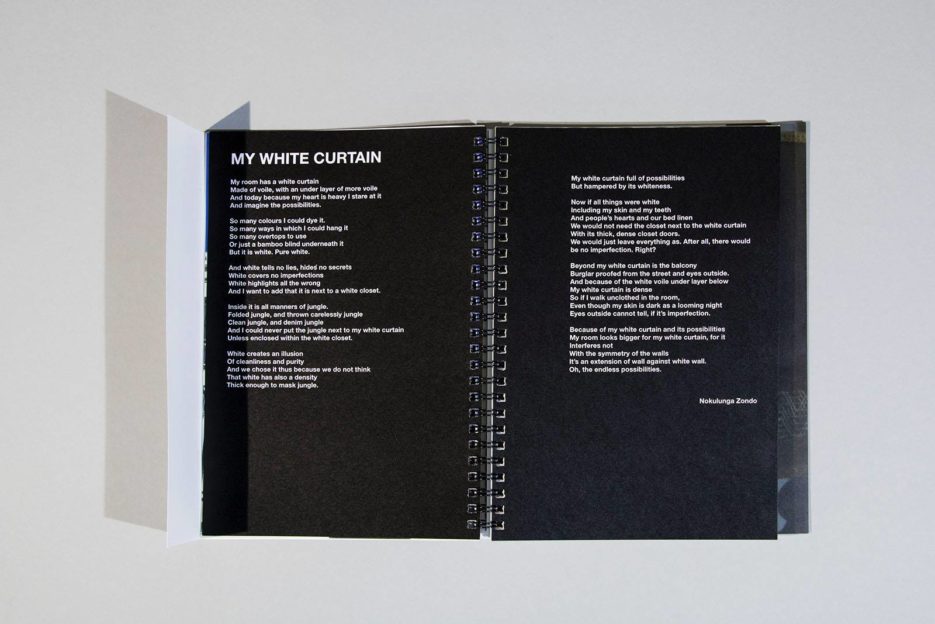 Since you moved, and you now live in a house in Pietermaritzburg, what colour of curtain do you have in your home today?

At the moment I have a hot pink over voile of pale blue with braided piping in the lounge. I have a pastel vertical stripe in the kids’ room, orange thick cotton over white voile in my bedroom, and lime green over white voile in the guest bedroom. My house is an explosion of colour and texture, and we love white curtains over white voile too but we only use these to make a room seem bigger.

How did you get involved in the project?

To cut a long story short, the project chose me! All I did was write a poem to vent out my frustration and post it on a public platform where it got published. You (from your own frustrations) were looking for ideas on a project you wanted to create, and came across this poem on the Internet search engine, and contacted me. I was mainly excited that my poem was relevant enough to impact someone’s situation.

What was your favourite part of the process?
My favourite part was walking into the Sea Point Main Road exhibition that first time, and finding the whole walk-in gallery bursting with individualistic creativity inspired by my poem. I felt good! Malik Ntone Edjabe’s series of videos on monitors with the poem interwoven also blew me up! Nothing about that was ‘white’! 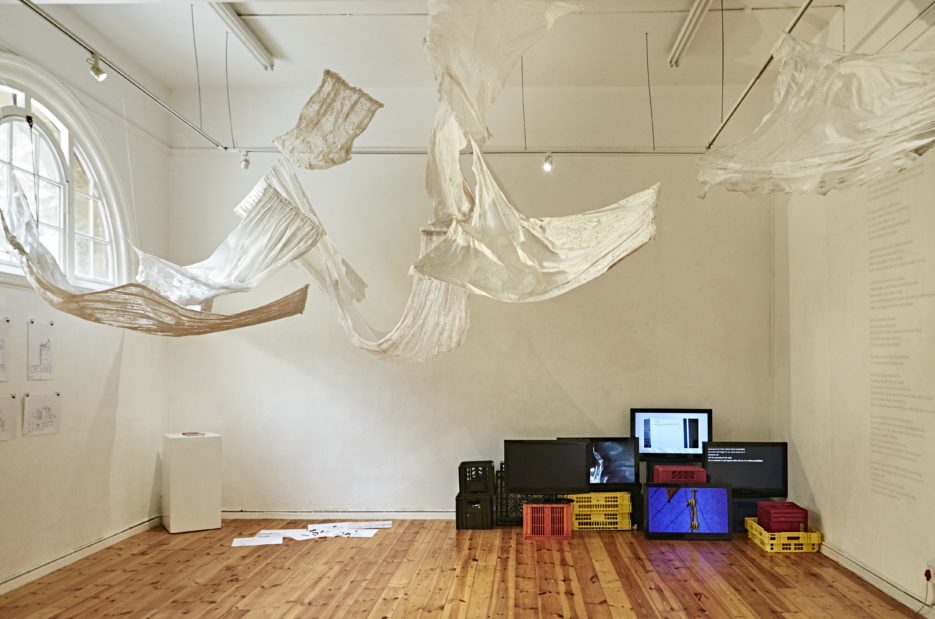 What do you think about the exhibition?

Art lives on. I feel like I had a special place in confronting the White Curtains issue. In so doing, I paved the way for artists to have a voice and confront stereotypes, being caged in and forced to conform. The exhibition started so stark and so frigid in its lack of colour, and by the end it was an explosion of opinions in the form of Frank Lunar’s Colouring book for all ages, and Atang Tshikare’s illustration on the window of the gallery. Also, this got people talking. It probably woke many people up to the fact that there are NO curtains of colour in Sea Point, which probably not many had realised before. 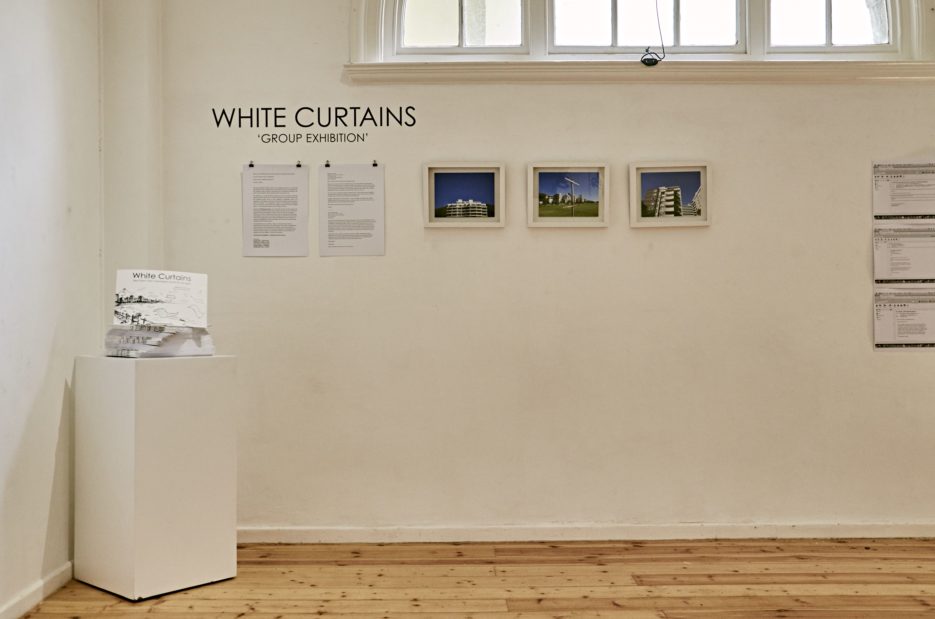 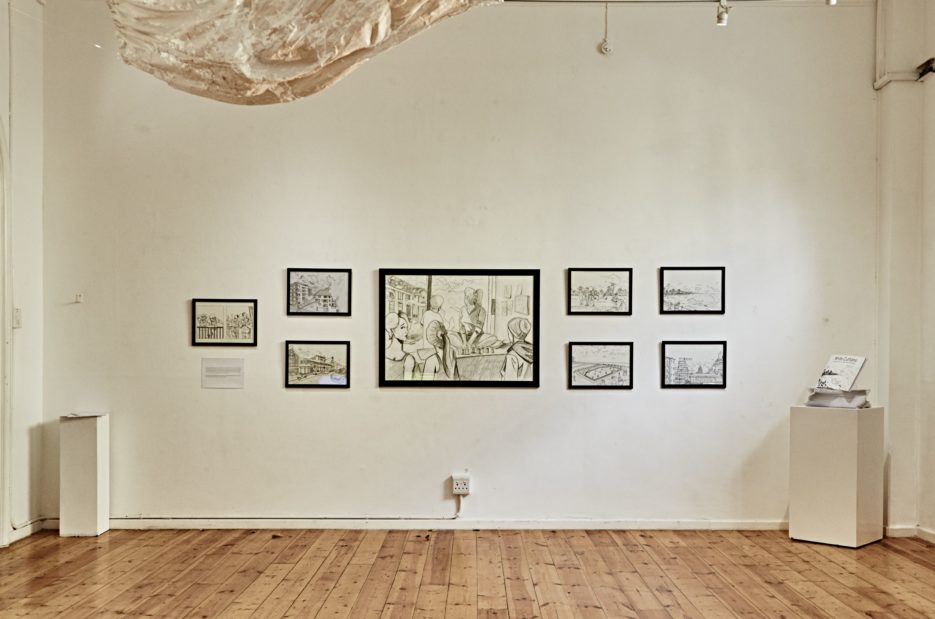 Did any story stand out in your head from the project so far?

The entire project in so far as I’m involved stands out for me. Not in the least that its different artists, different textures and forms of art, brought together by this one issue.

One thing that stands out the most is outside of the poem. As I was travelling to Cape Town by bus for the first exhibition, we got stuck for many hours in the middle of nowhere. In the frustration and hunger people were phoning the owners of the bus company complaining. Someone screamed on the phone that if the bus was carrying a lot of ‘white people’ we wouldn’t have been left so long stranded on a bus without water! I remember being embarrassed by this outburst, because there were a few white people on the bus. I never discussed this because I felt ashamed of my people’s pre-occupation with race. Now, when I think about that, I’m embarrassed that I was such a snob about it. This association of white (as a race) with better service delivery is a social norm that we should, all of us in our different races, strive to rectify. I realise that stereotypes are stereotypes because they happened once too often to the same group of people in the same circumstances. By keeping quiet and never discussing this I was perpetrating another stereotype, of coconutism! 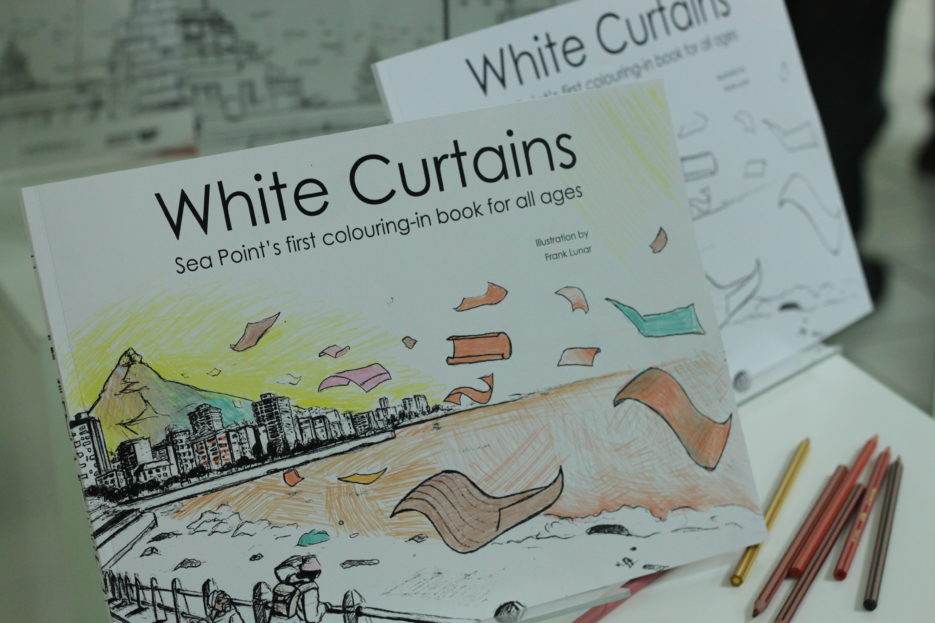 How would you describe the project to a stranger briefly?

I prefer not to describe it. I prefer to let a stranger walk into the exhibitions and form their own opinion, and tell me what they see. If you ask me what this project is about, I’d say it’s about what one wants to say about white curtains. What do white curtains symbolise to one, and what are they gonna do about it?

What motivates your art practice?

Life. I like to believe that art cannot be confined to form. Art is expression of emotion, belief systems, convictions, unfair treatment, major events that change someone’s life, like love, war, an era, and what motivates me can be anything. I may choreograph a dance piece that talks about a particular story, I may do an abstract painting because of a mood, and sometimes I don’t have anything to say at all, and that silence is art. Us artists, we are generally known by ‘normal’ society to be a weird bunch, because we don’t conform. That motivates my art. 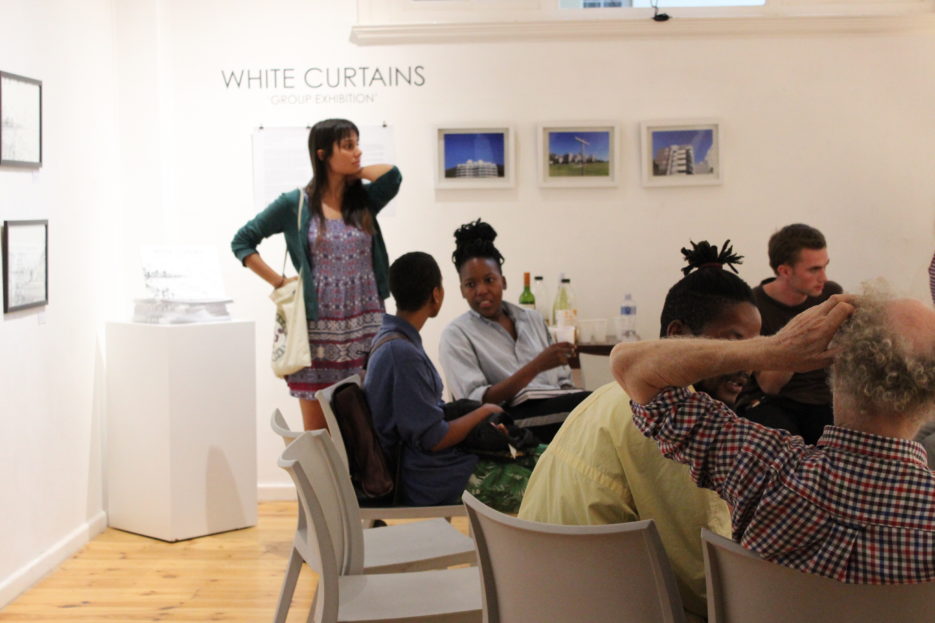 Why are you a poet?

That’s like asking me why I drink water. It’s good for me. With poetry I can say anything without people judging me. Because if it sounds weird, the excuse is that it’s art, and artists are weird anyway.

Do you feel that your work has social impact?

Not really. I suppose it gets people talking, and asking themselves questions they generally wouldn’t, but does this change the price of bread? Maybe not. So I’ll leave this open for opinion, whichever applies, I’m good with. 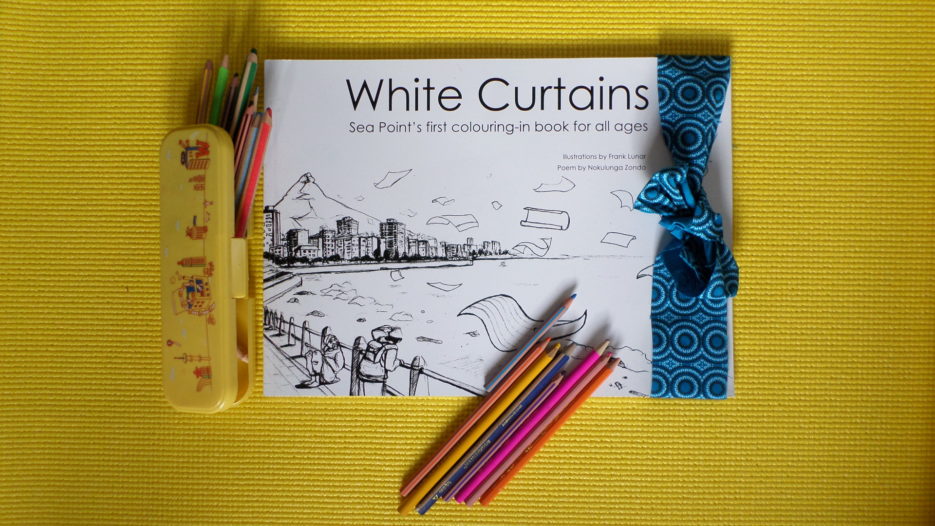 Is there hope for White Curtains spaces, like Sea Point?

Yes! White Curtains, like opinions, are all enforced by people. And where there is human race, there is always a possibility of change. Whether that possibility evolves, or stays just as a possibility is subject also to individual opinion, but I believe that the more we address these issues and confront them with art, people will find it easy to look at themselves without pressure and make that step towards change.

Where do you see the project going next?

I’m just shocked that its gone as far as a book and the exhibition, I never expected anyone to take this seriously! Of course the possibilities are endless, anything is possible. 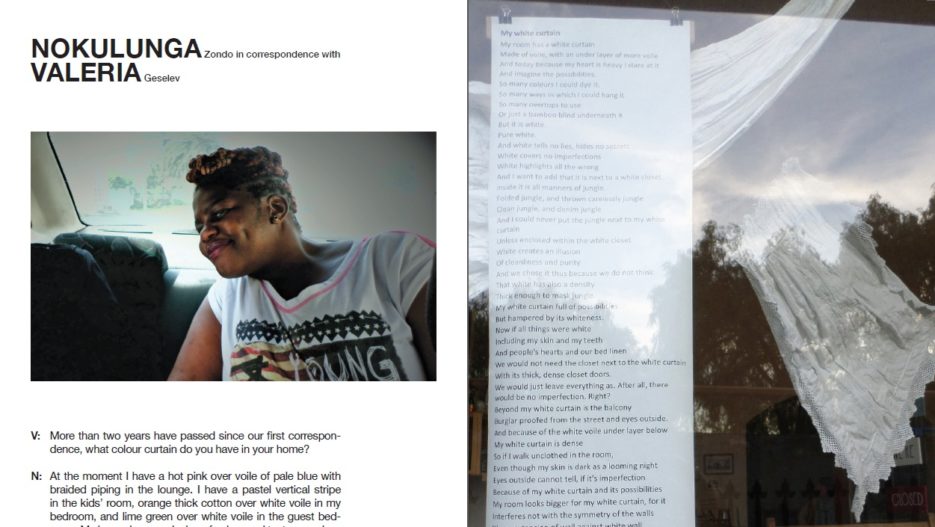 Do you feel a wind of change in the country?

Right now I feel political instability, economical unrest and a civil war creeping up on us. People are waking up from their political slumber and realising they went to bed and left the country to a kid that never grew up, and suddenly finds himself with a lot of money to buy all the toys he never had at his disposal. Like a recalcitrant child, many adults feel protective towards him and let him play with his toys, but are wondering if anything else is in store. Of course it is, but people will still be surprised by whatever he does, even knowing or suspecting what he is capable of. Now, this has nothing to do with White Curtains, has it?

White Curtains Diary book is available online at ISSUU, at National, Central and Michaelis Libraries in Cape Town, and directly from the publisher at yallashoola@gmail.com