‘Looking for Ghana and the Red Suitcase’: An interview with Lhola Amira

Written by Gabriella Pinto on Mar 22, 2017 in Art, Interviews

While de-colonisation is a term used to explain a multifaceted set of social, political and economic circumstances taking place in previous colonies, it is too often devoid of particularity. There is a way of looking at Africa, particularly from a European standpoint that thinks African countries would not be able to sustain themselves pre-colonisation (Helen Zille’s recent tweet is a prime example of this narrow-minded view).

In her latest body of work, Looking for Ghana and the Red Suitcase, Lhola Amira seeks to unpack the process of decolonisation and observe its unfurling in different countries – this time in Ghana. She examines the framework of decolonisation; how it operates physically and psychologically, and how Africa needs to be constructed on its own terms.

We had a quick chat with the artist about the work.

How did you become an artist?

I emerged as an artist in 2009. At that time, I was teasing out the things I wanted to explore in the creative sense. The narrative/subject matter was always there – but the tricky part of it was finding a way to talk about it.

You resist labelling yourself as a particular kind of artist and define your practice as ‘appearances’. Why is that?

What I do speaks to a different sensibility – art history and performance art, usually can not adequately encompass what I do. If black bodies are seen in a perpetual state of performance – then how can I frame what I do as performance itself? You cannot perform the thing that you are; you can not perform blackness or being black. You must remember that visual history in the broad sense has made black bodies exist in a double consciousness of having to perform itself as itself – it then became very important and necessary for me to look at what I was doing and why the term performance was not only challenging but also problematic…

“The 2015 Rhodes Must Fall movement resulted in the statue being removed and taken to safety – we are not meant to know where it is, yet we have men, womxn, and children who disappeared during apartheid and their bones were never recovered.”

For instance, each day a black person remains sane – they have achieved this because they have dared to dream beyond that day and therefore they are futurists. The history of the world shows us how determined it has been to remove black bodies. So what I do is exist exactly at this point of understanding, my work is a commemoration in itself because every day spent living black life and blackness is commemoration personified. So when people say ‘black girl magic’ – it is because we are all aware of what is needed to transcend and the work put in to remain sane, just for one more day. So my work cannot be a performance – I just do not see how what I feel I am doing, is archiving blackness.

Lhola Amira is a persona born from your personal obligation as an artist to speak about things other’s don’t. What are you giving voice to that others have kept silent?

Looking for “Africa” in Africa. Observing how a decolonised Africa actually looks, because we are living it. If we agree that this current moment is what decolonised Africa looks like, then maybe we should stop speaking about re-imagining ourselves – because this ‘re-imagining’ is happening within colonial structures, and then being termed ‘decolonial’. So we need to imagine ourselves, when we imagine – we create. Take for example the current climate of decolonisation happening at South African universities. 2015 Rhodes Must Fall movement resulted in the statue being removed and taken to safety – we are not meant to know where it is, yet we have men, womxn, and children who disappeared during apartheid and their bones were never recovered. In the 2016 Fees Must Fall movement, where black kids marched, occupied and shut down universities for fees to be reimagined or at least not increased– black bodies re-traumatised, new forms of violence performed on, and endured by black bodies, and then in 2017 the movement was rewarded with a 8% fee increase. This is why I am always in awe at the level of sanity black people have. It seems this is ‘decolonised’ Africa – after all that has happened; the entertaining of dialogues between different constituencies and black kids, and yet the fees went up 8%. It makes me sit and think about blackness and its condition, perhaps we have a less romantic illusion of dying for revolution because we all know our celebrated revolutionary heroes were killed – and most of them killed before they were 40 years old.

Your latest work emerged from a trip to Ghana. Out of all African countries, what inspired this choice?

Ghana entered a period that marks 60 years of post-colonialism. In terms of socio-political and economic understanding – 60 years marks a generation, and a significant shift ought to have happened. I wanted to see what 60 years gives a country that has been colonised.

Each African country has its process of decolonisation. What were some of the main preconceptions you had of Ghana and how did they change on your trip?

I didn’t want to hurt myself anymore about the African condition of post-colonisation – so I had no preconceptions about Ghana, but I got to see parts of Ghana for what they are now. But I can say that Ghana taught me not to expect, but to do what I needed to do. It made me intensely question aid sent to Africa – and the relationship African currencies have with the world – what was looted during colonialism and what continues to be looted. Whether this happens because of our political structures or something about which I am oblivious.

Looking for Ghana and the Red Suitcase is the title of your new body of work. Can you elaborate on the ‘Red Suitcase’, what significance does it have?

The Red Suitcase is a metaphor for DeColonial Love. So the idea of looking for a physical object assisted me in moving through Accra. It allowed me a bit of insight into things I might have overlooked – places I might have not uncovered.

“Township planning and architecture resemble psychiartric wards, one entry and exit point – each house on top of each other – streets designed in a grid that locks you into the ‘compound’.”

Much of you work looks at dismantling stereotypes. How does the perpetuation of old African tropes limit the social, political and economic complexities of decolonisation?

The insistence of looking at Africa only through a lens of developing – as if there was no fatal interruption in how Africa was defining and articulating itself – is a limitation. If you think of ‘Aid to Africa’ and how it is introduced, as saving us from ourselves – without acknowledging colonialism and the continued looting of Africa by transnational corporations. If we take the land question in relation to sustainability which has become the common word heavily used in post-colonial times – which implies that Africa could not sustain itself pre-colonisation. Also, to look at colonisation as only a capitalist movement is absurd because then it begins to look at any African person, who has figured out how to negotiate capitalism, as a coloniser; whereas colonialism is very racial, but its benefit is also economical. The idea that all you have to do is work hard to shift things, as if Africans have never worked hard – this is all we have ever done, work hard; slavery: taking people out – the strongest, the smartest, America was built by African slaves, industries are built on Africans.

Your art also explores psychological and geographical spaces. What is your observation on the relationship between the two, especially in a country like South Africa?

Gugulective once made an artwork titled A Building Is A Man, which explored how geographical locations impact our psychological selves. It looked at how black men came into the city for work and lived in hostels and how that played a part in dismantling black family structures.

Township planning and architecture resemble psychiatric wards, one entry and exit point – each house on top of each other – streets designed in a grid that locks you into the ‘compound’. The township and the city have a strange relationship, at the crack of dawn most black people wake up to catch the first train into the city at 5am to be at work at 7am – long queues at the taxi rank, busses filled to the brim, and men, children, womxn standing on the tips of their toes, at the edge of the train door. Black people risk their lives everyday for less than minimum wage. The repercussions of Bantu education are still being dealt with – it is the intersection of psychological and geographical complexity of being black in South Africa.

You’re preparing for an investigation Looking for “Africa” in Africa. What do you hope to find?

Africa. Fellow imaginaries. People who lead their lives as a constant response to being black, African, womxn – and see how they articulate this response. I hope to find ways to deconstruct the grips of colonialism and construct Africa on its own terms. There are people already doing it – the university kids are hard at work, writers from Africa are on it, film makers are documenting it…it is only a matter of time that we are able to pull and weave these narratives that speak to and for Africa.

In Looking for Ghana and the Red Suitcase some images are in colour, and the rest are in black and white. What informed this decision?

You mention the futility of trying to understand the issues and controversies of a place without having been there. How do you hope your art can address this?

Well, I hope my work gives some insight on where the viewer might start to look – the work comes from my encounter, which does not adequately capture Ghana. I suppose, what my work attempts to do is also say – whatever we thought we knew, might have to be paused and we must really listen to hear. 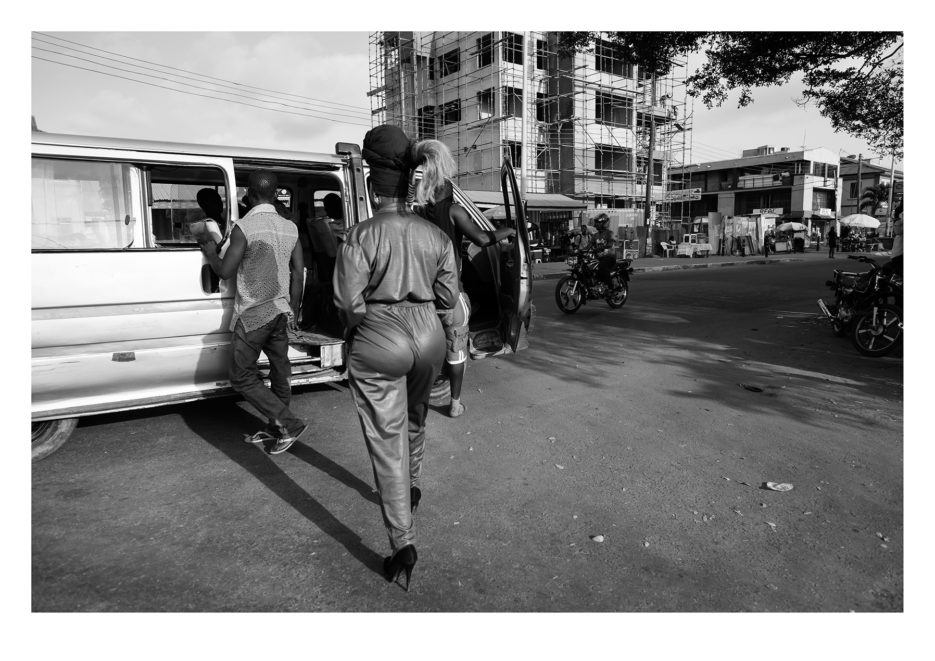