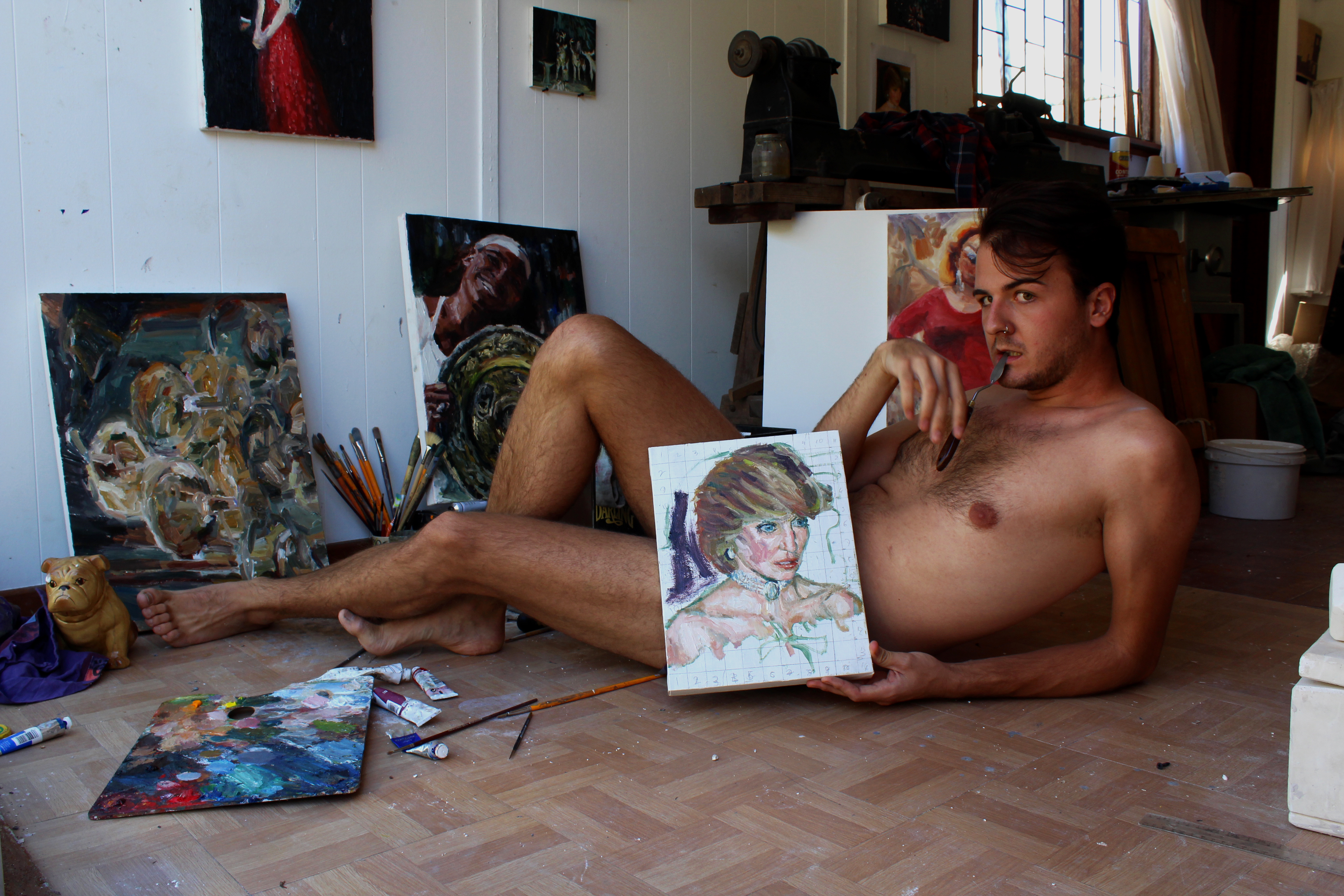 Posted at 16:33h in Art, Interviews by Nikki Zakkas
0 Likes

Fanie Buys is a Cape Town-based multi-media artist. His most recent body of work, which serves as a farewell to his childhood, is titled: Sincerely, With Love. The words unite a series of paintings, video works and text pieces that look at who the artist is, how he got to where he is, and how he coped with the process.

We recently spoke with the artist about his West Coast upbringing, his sources of painterly inspiration and how his ongoing pre-occupation with his own queer identity informs much of his practice. 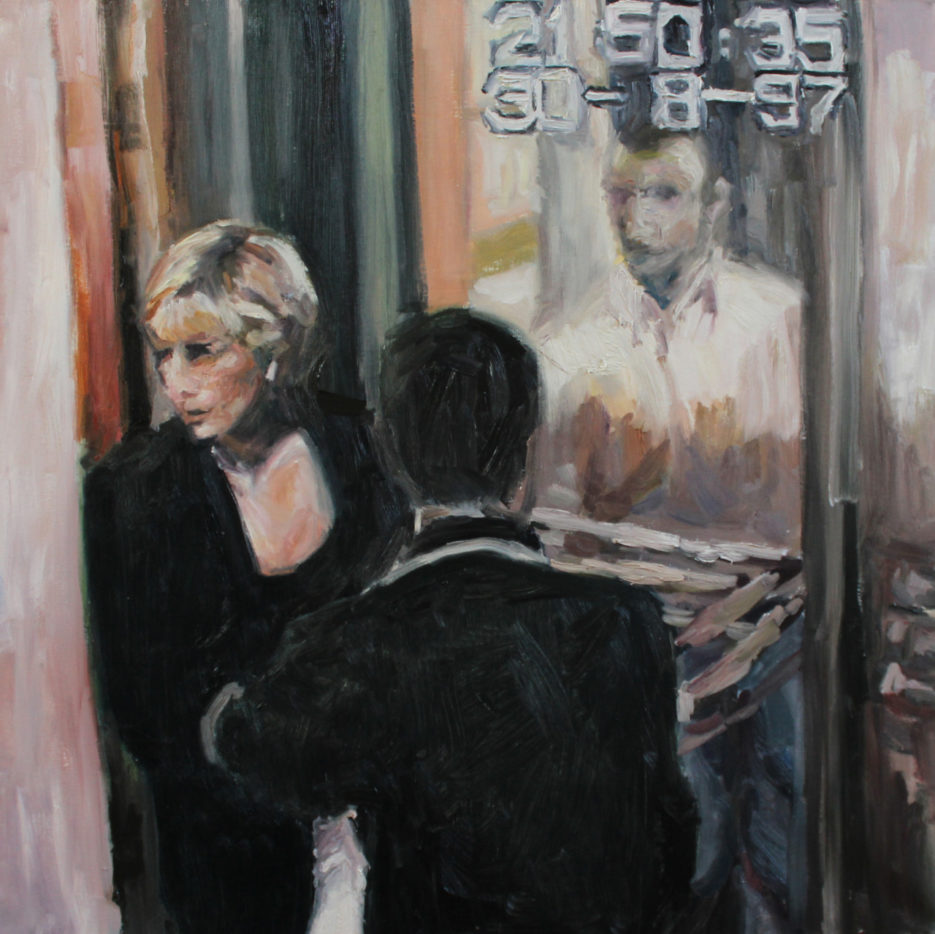 Tell us a bit about yourself and where you grew up. What has your creative journey been like so far?

No well in all seriousness I was born in Gansbaai (Baardskeerdersbos to be exact) and moved along the coast until my family settled in the Garden Route area. It was a very sublime-to-the-ridiculous upbringing. We went from mixing with ultra conservative Dutch Reform people (at one point my godparents were the minister and his wife) to the mélange of trust funds and journeys of self-actualisation that make up the Knysna forest social scene. I mean my creative journey has probably been a product of that, there are elements of the French-manicure/Maltese poodle/spider-plant-macrame and the perpetual farewell to the nineties rave scene that characterized 2000-2009 in George and surrounds.

I didn’t get along well with children my own age. I was incredibly lucky to have had groups of adults who took me on as an (albeit small and squeaky) adult. I suppose if you can imagine a group of about 3-4 women aged 35-40 and a chubby, camp 12 year old, that was my after school crew. My graduate show was in part an evocation of the security and freedom that space gave me. I suppose a lot of my way of thinking and speaking and looking at the world comes from that. 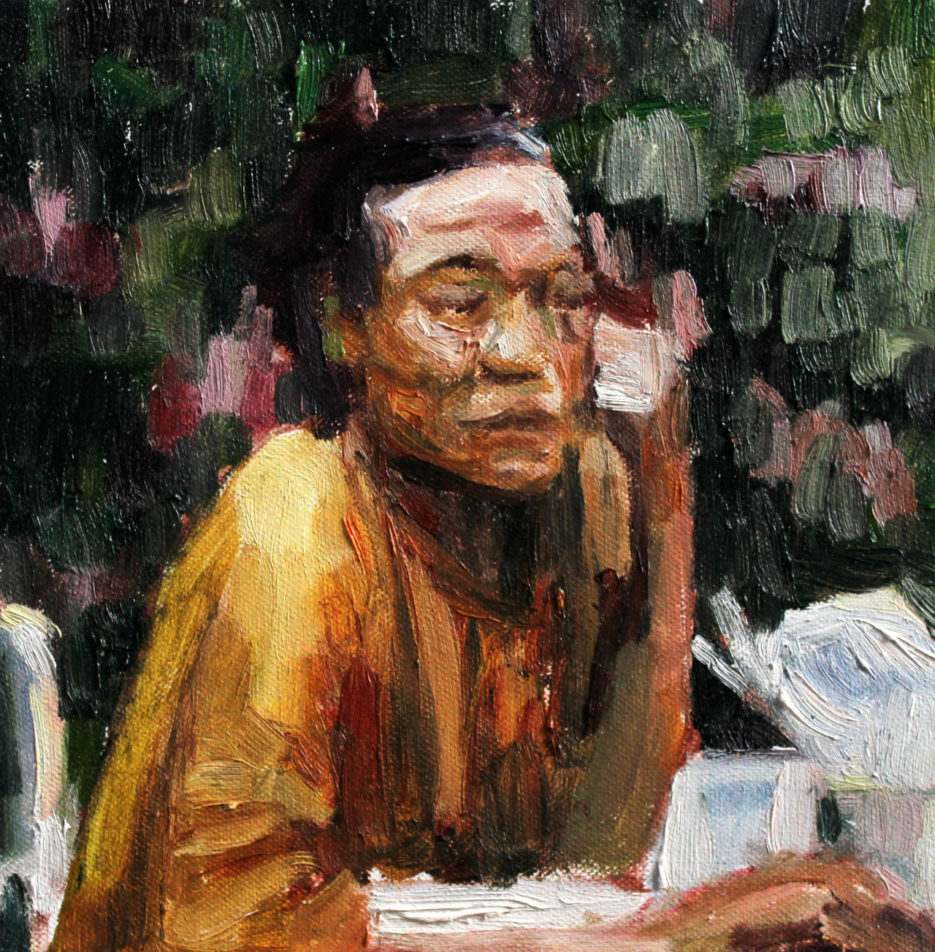 Can you tell us about your choice of subject matter in your body of work Sincerely, With Love?

To be honest, my gut reaction is to just respond saying “no, I am physically unable to.” It’s very hard to unpack. I suppose a lot of it was more instinctive – paint now, ask questions later. I like to describe it as ode to gay boy bedroom aged 14 and three-quarters. Even in my first year at halls of residence it was great palaver with the old sitting room carpet and all the pictures and the clippings and the tiny bird statue. I think I use found imagery (clippings, pictures from the internet, tabloid photographs) to make myself comfortable when I occupy a space. I mean even as I type this I’m looking at the ‘Diana…Princess of Hearts’ poster above my bed. The bias is towards people who present as slightly more femme, more performative, but also people who I am a genuine fan of. Painting another person is very intimate, and I want to respect that proximity. I hope that comes across in my work. 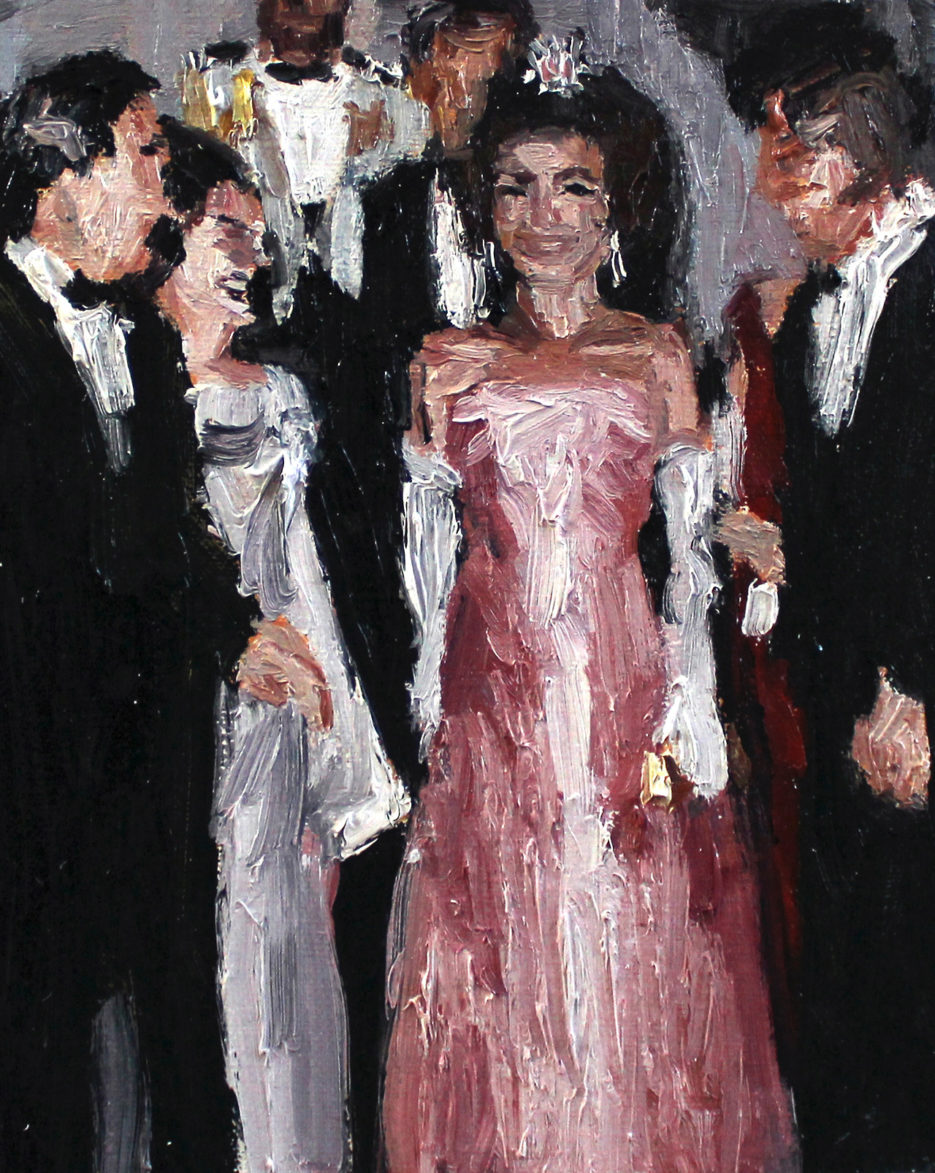 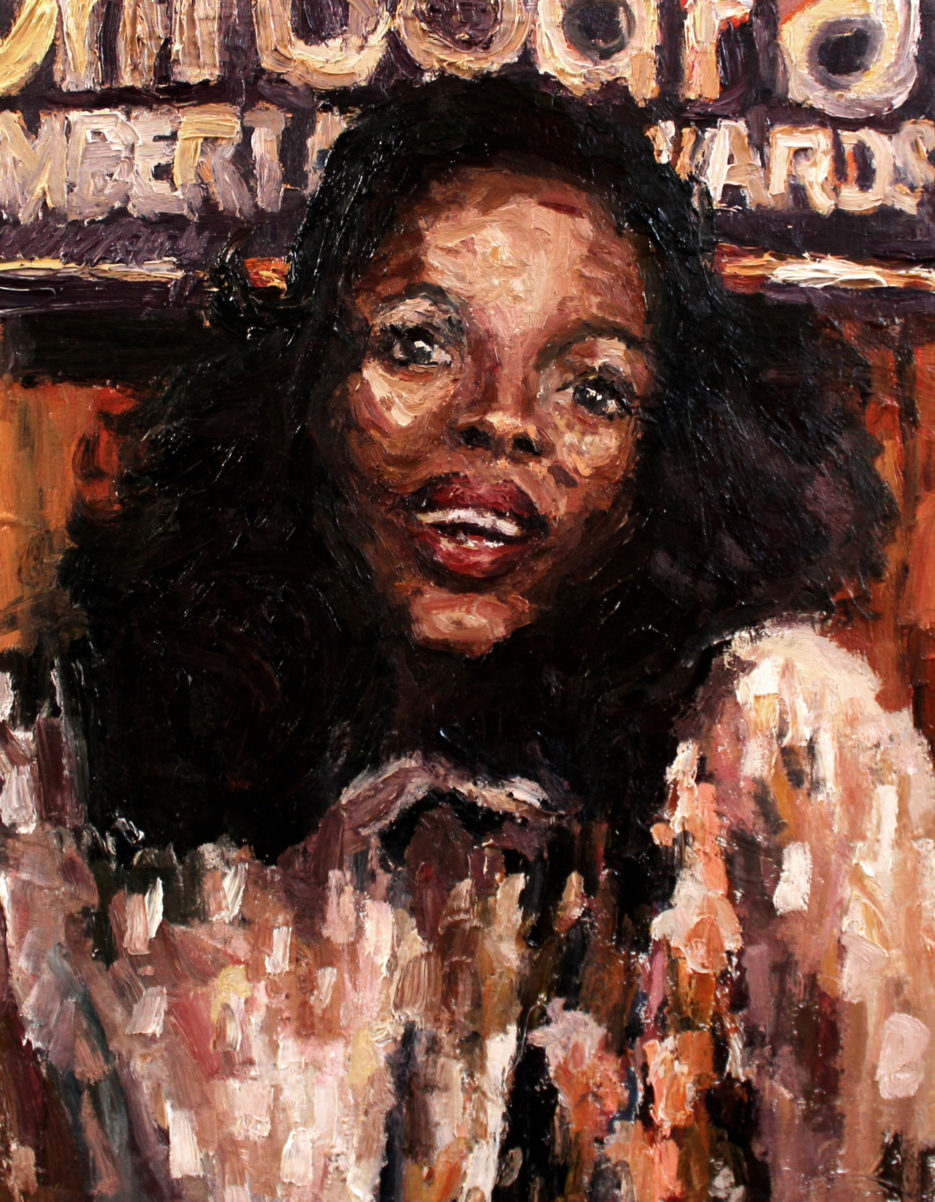 ‘A Painting That Now, Makes Me Think Of The Idea Of Biblical Grace (Donna Summer)’ (2016)

You use colour so expressively. What informs your colour palette? Are your colour choices meant to signify anything specific?

I describe my painting style as an example of moer net by school of painting. Really I just keep painting and mixing colours until it looks like the picture. If it doesn’t work, let it dry, paint over it. I don’t paint from life, I don’t even paint from original photographs, so a lot of the colour comes from that. Older photographic chemistry makes everything a bit orange, a lot of printers skew the whole painting toward ultramarine blue, I try to work with that. I’m afraid it’s more dumb luck than creative genius.

Your paintings have a kind of melancholy and nostalgia emanating from them. What incited your interest in the themes of memory and longing?

I’m cautious of “nostalgia”. I have created a lot of my work to cope with the present rather than to return to the past. A good reference for me was the “Judy Garland as gay icon” wikipedia page (redirected from the “Friend of Dorothy” wikipedia page):

It goes on to say that “[t]he boys in the tight trousers” (a phrase Time repeatedly used to describe gay men, as when it described “ecstatic young men in tight trousers pranc[ing] down the aisles to toss bouquets of roses” to another gay icon, Marlene Dietrich) would “roll their eyes, tear at their hair and practically levitate from their seats” during Garland’s performances.

It’s about who makes you levitate from your seat and throw the roses and prance around for. In high school, which was a helluva time emotionally, my dear friend (and at the time, French teacher) said that if you can’t get through the day just think of a song you love, and focus on it, and before you know it the day will be over. Being depressed is not quite that simple, but it’s much nicer to focus on ‘I Feel Love’ than the fact that you’re eating your lunch alone behind the art prefab because you’re scared of being called gay by the older boys. 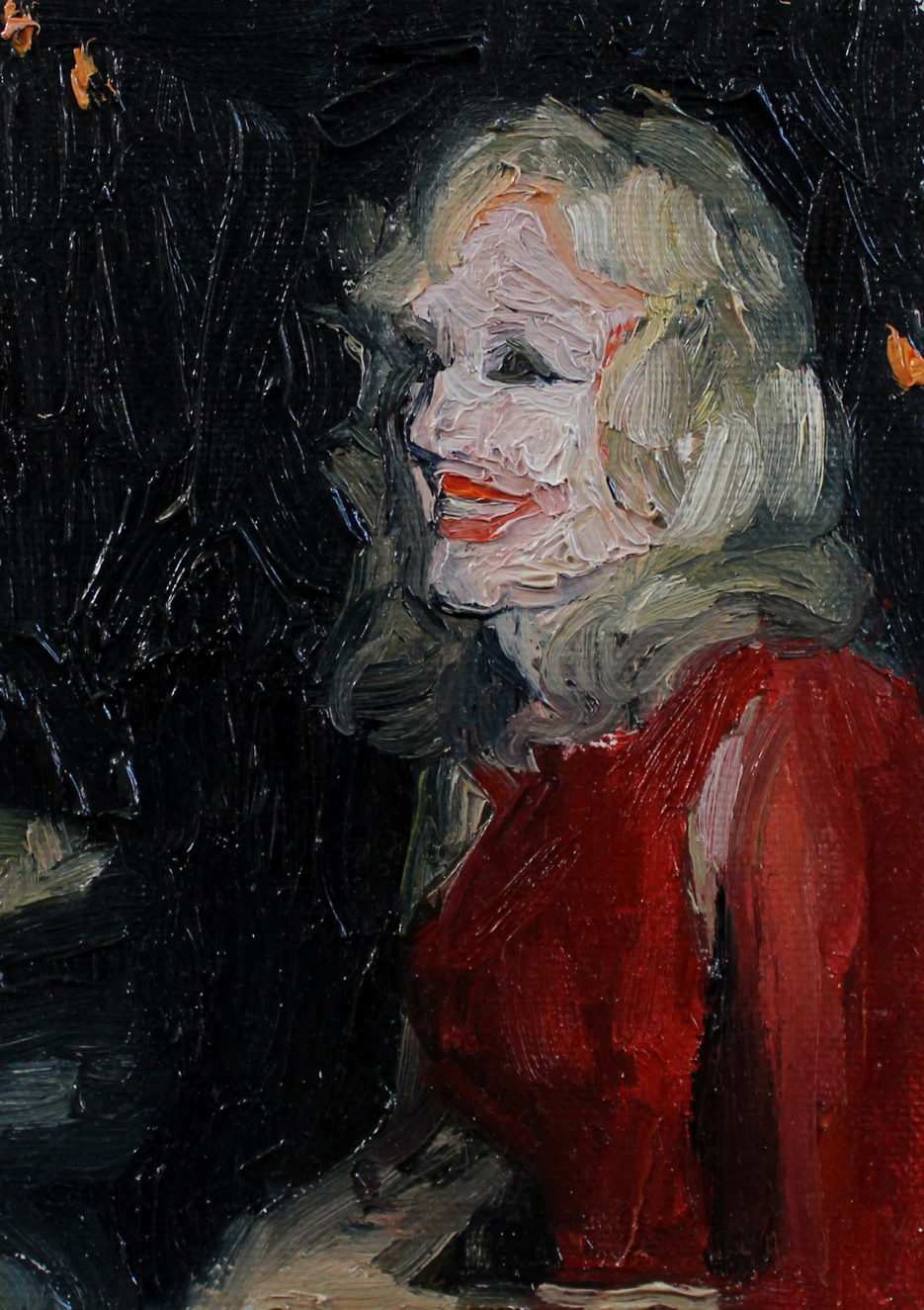 Where do the phrases in your text-based artworks come from and what do they mean to you?

I mean once again a lot of it is stream of consciousness. I have a big notebook document entitled “t-shirt ideas”, folders titled “cool shit 2 paint” and “cool shit to paint resurrected.” It’s all the witty mind rubbish collection aesthetic. I mean one of my t-shirts comes from my sex and the city Fanie Buys age 12 days. I rang Darina on Ursula’s birthday, Ursula passed away when I was in first year, and just spoke about all the great things she would say and do. We spoke about how she (Ursula) came into Darina’s house on a Sunday afternoon, apropos nothing: “DO NOT EVEN SPEAK TO ME IF YOUR NORTH NODE IS IN SAGITTARIUS”. That was just… the vibe. I suppose most of them are private jokes that made it to the big time. From a very young age, my mother and I especially, used to play with language. To this very day we call the area behind the sofa the ohdear. As an infant I would, in a rather theatrical Marat/Sade fashion, drop things down the back of the sofa and proclaim “OH DEAR” to all and sundry. I’m also a bit infamous for getting drunk and live facebooking my night out. In a desperate bid to try and sound smarter than I am the slogans/captions are a mediation between my own vernacular and the frustration I feel with interpersonal communication (the crying, the slamming of doors, the only being able to talk to boys when I’m very drunk or on the internet, etc.). 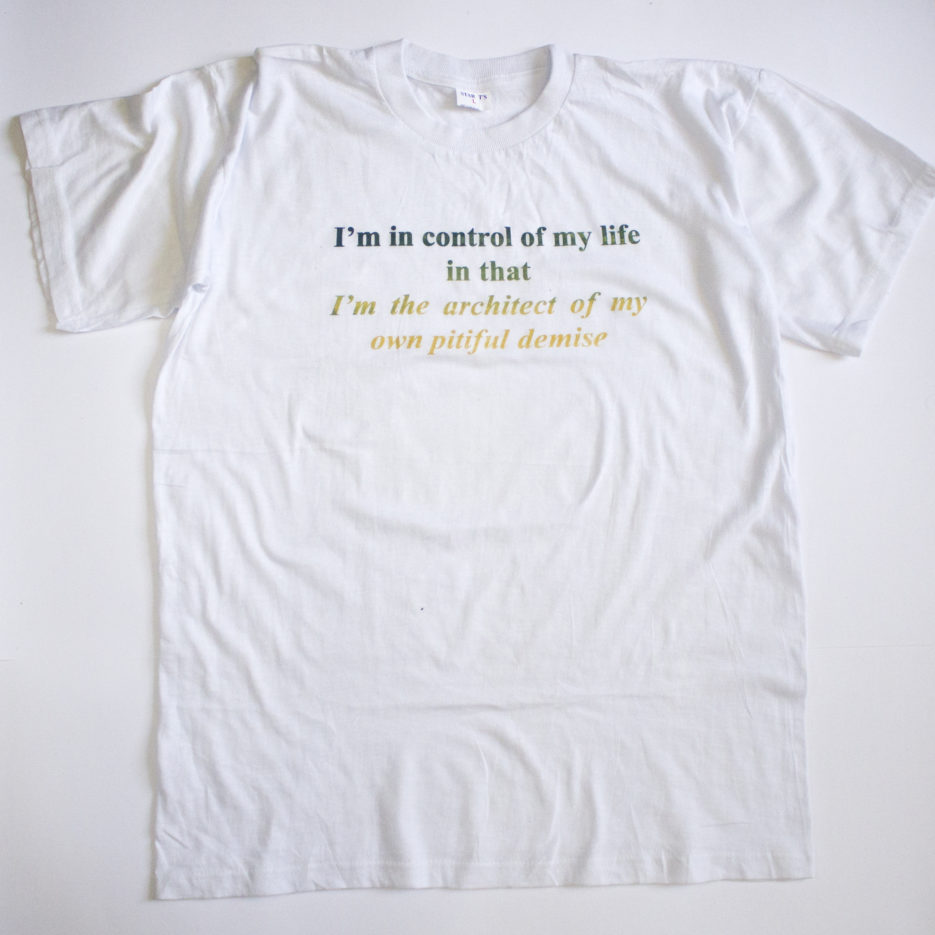 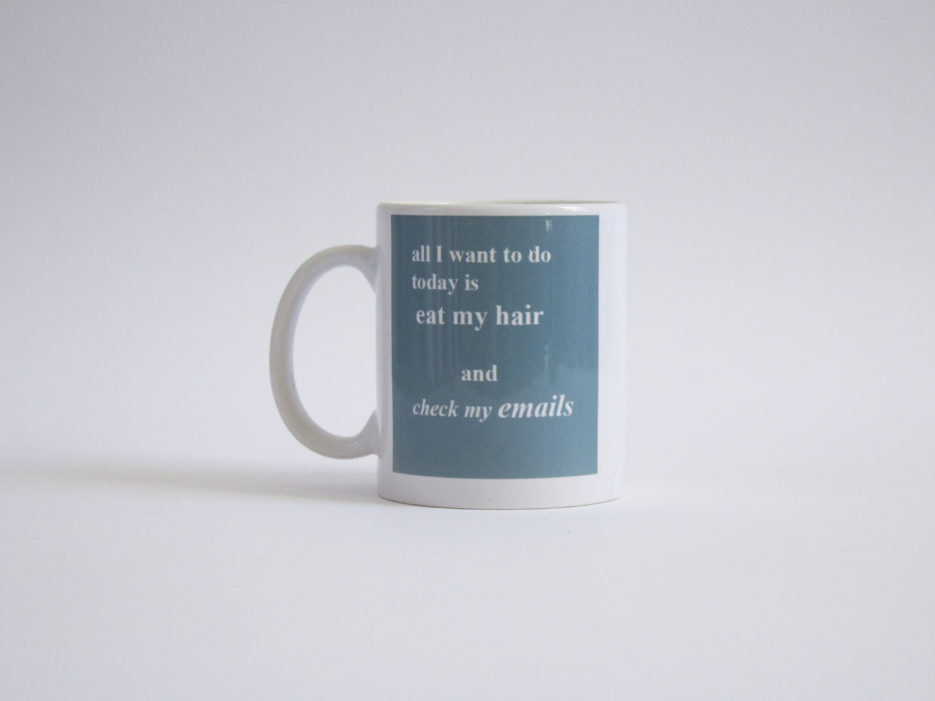