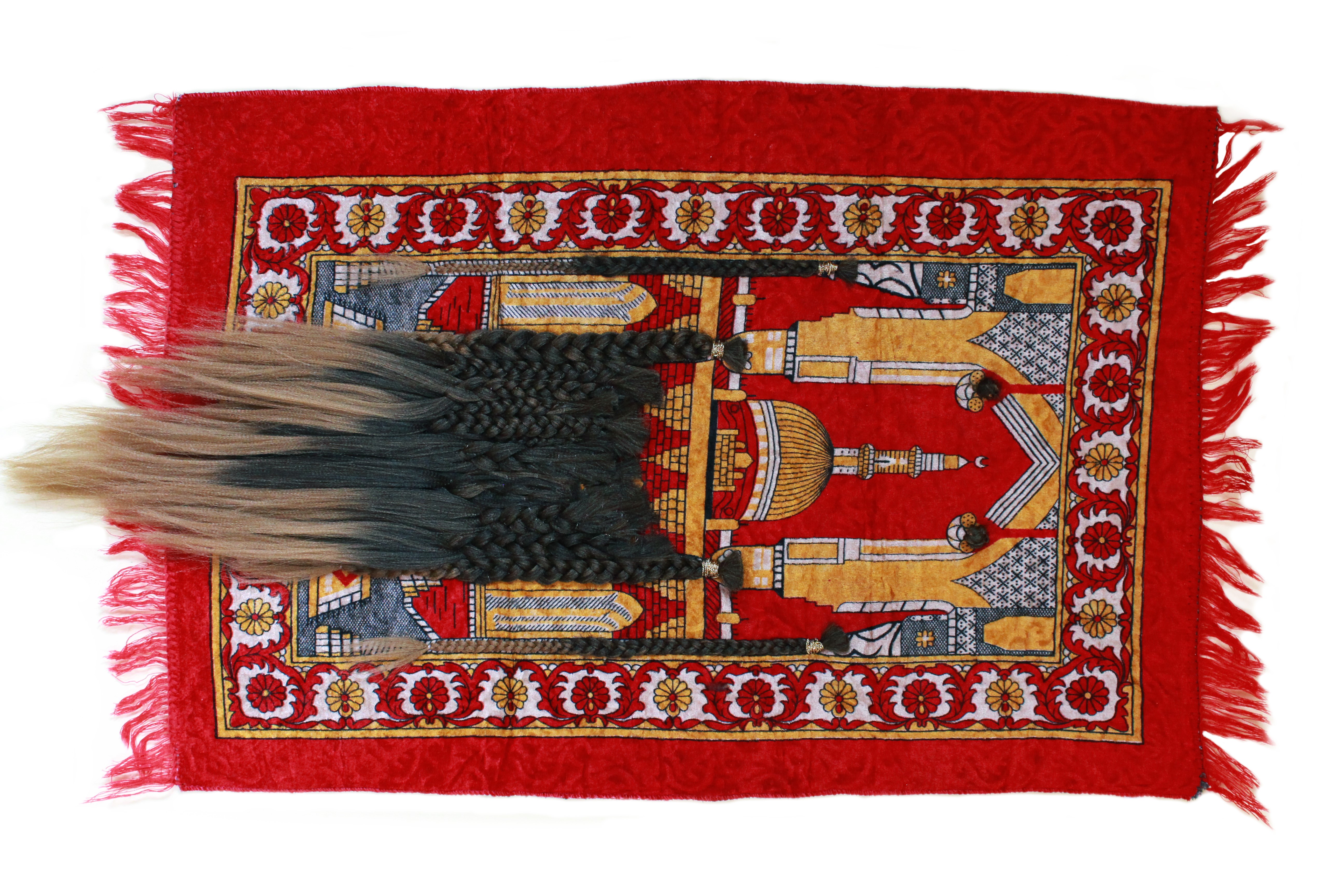 Fulla, a dark eyed, Barbie-like fashion doll created almost 14 years ago by a UAE manufacturer, has amassed a huge following across Arab countries. She wears a hijab and comes with her own tiny prayer rug, in pink felt. Cape Town-based fine artist Laylaa Jacobs, takes inspiration from the cultural icon in her most recent series, titled ‘Fulla’, which comprises six prayer mats embellished with body adornments.

“The application of body adornments show the West imposing on me through media but I am also represented as the one imposing on my own religion and challenging this idea of what a modest Muslim woman should be and how they should appear,” she explains.

Her installation works are a statement of ethnic and cultural assimilation, a personal narrative touching on topics of identity, faith and belonging as a Muslim woman within a western dominant culture.  “I show my desire to merge Fulla and Barbie as one identity. As much as I attempt to combine these two identities I will always be observed as Fulla. Fulla is about my inner chaos as a Muslim woman facing challenges most people take for granted. Muslim school encouraged me to be modest in behaviour as well as my dress code but when I returned home I’d play with my Barbie. I am torn between what I should be and what I want to be,” Laylaa describes.

On the 13th of May Laylaa will be exhibiting at the Nirox Winter Sculpture Art Fair where ‘Fulla’ will be taking cement form. She also has plans to expand on her brand ‘Fulla’ in partnership with her mother and sisters. “I dream to start a clothing line which may one day be showcased at South African fashion week and perhaps on an international scale,” she shares with us.

See Laylaa’s artworks alongside our interview with the up-and-coming artist below.

Tell us a bit about your background. What first drew you to art making?

As overstated and exhausted as it may sound, I really have always loved creating art since I was very young. I remember making my own colouring books at the age of six for my younger sister to colour in. Despite my dad working overseas for most of my childhood and teenage years I grew up in a very happy, female dominated Islamic home. Skip forward to my teenage years where I attended an all girls’ traditional high school my love for art and creating art only grew with time. I just graduated from UCT, Michaelis school of Fine Art, the place where ‘Fulla’ was born. 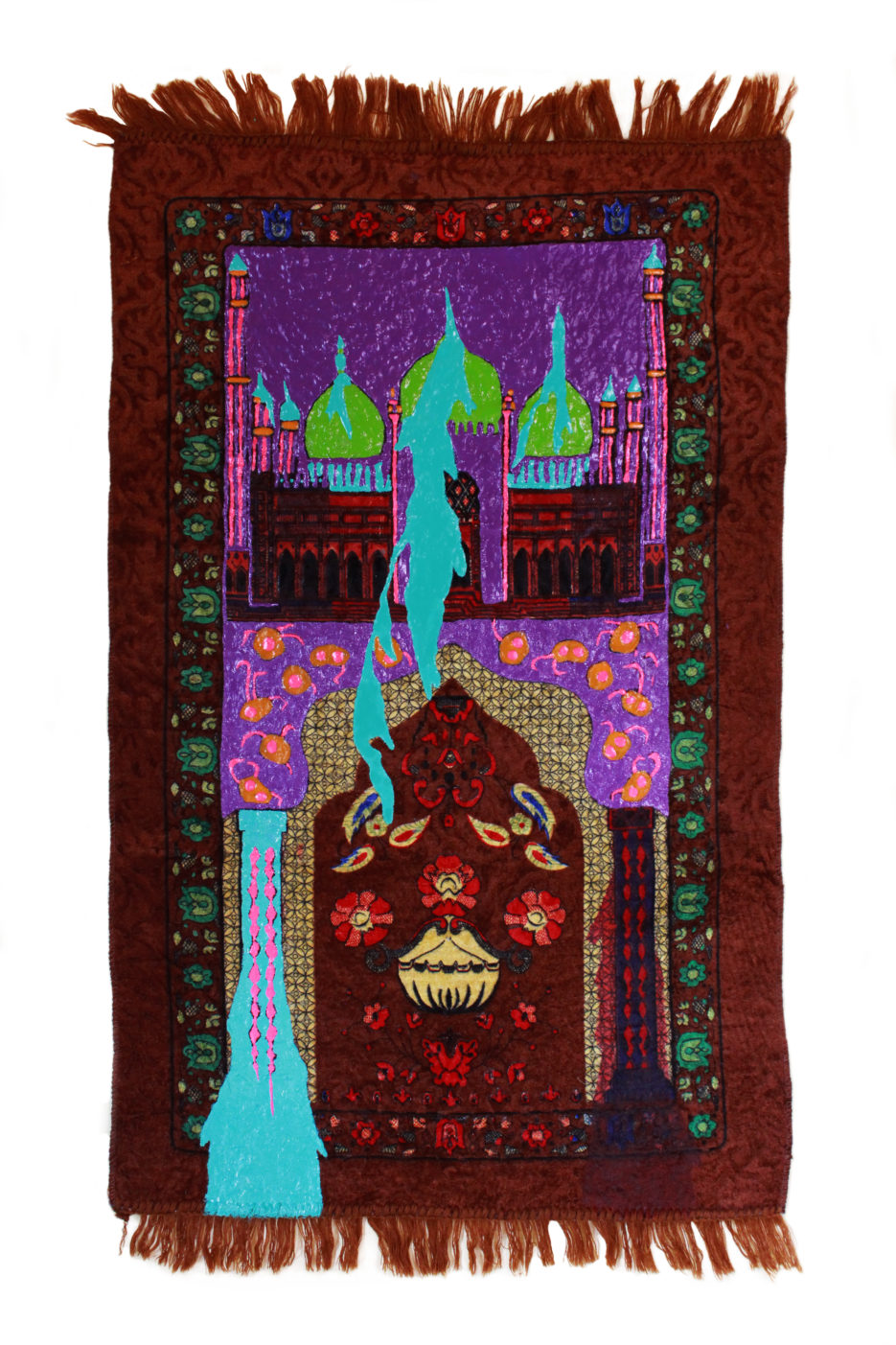 You deal with identity, feminism and religion in this body of work. How did these themes come to be your main inspiration?

Feminism has been ingrained in me much like male patriarchy and superiority is in other individuals. Growing up in a female dominated household and then attending a girls’ school there was no question of females not being able to do what males can do. I never felt that I couldn’t do something or couldn’t be equal to my male counterparts on an economic and political level. Religion is very close to my heart. It is something that I identify as. My main focus in my work is to express myself trying to cleanse Islam from the stain, which is the West but at the same time I am depicting myself as the thing staining Islam. ‘Fulla’ moves from body adornments found in the bedroom to the kitchen where I use steel wool as abrasives, which deal with the stereotypical domestic female body. 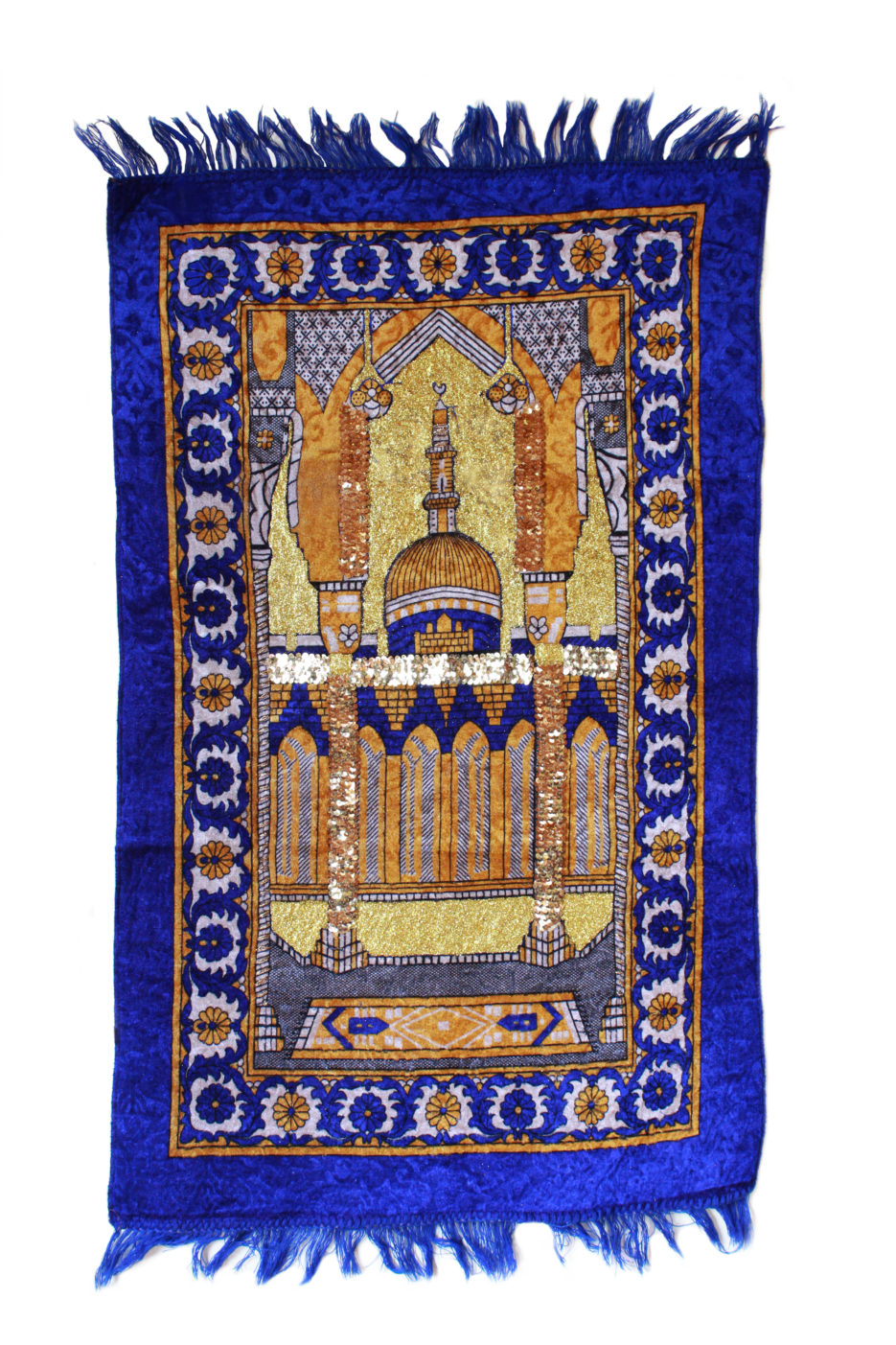 In my work I highlight the fact that my desire to be Barbie does not go away, it might revolve but in essence the battle remains the same. The funny thing is that whenever my sister and I would play with Barbie we would speak in American accents with names like Avril Lavigne, Ashley Simpson and don’t forget Barbie’s husband Ben Affleck. So my answer to your question is that I feel almost betrayed by Barbie being the one who created the fantasy around her and seeing as though my own fantasy has rejected me. So I’ve created my own Barbie with prayer mats called ‘Fulla’. 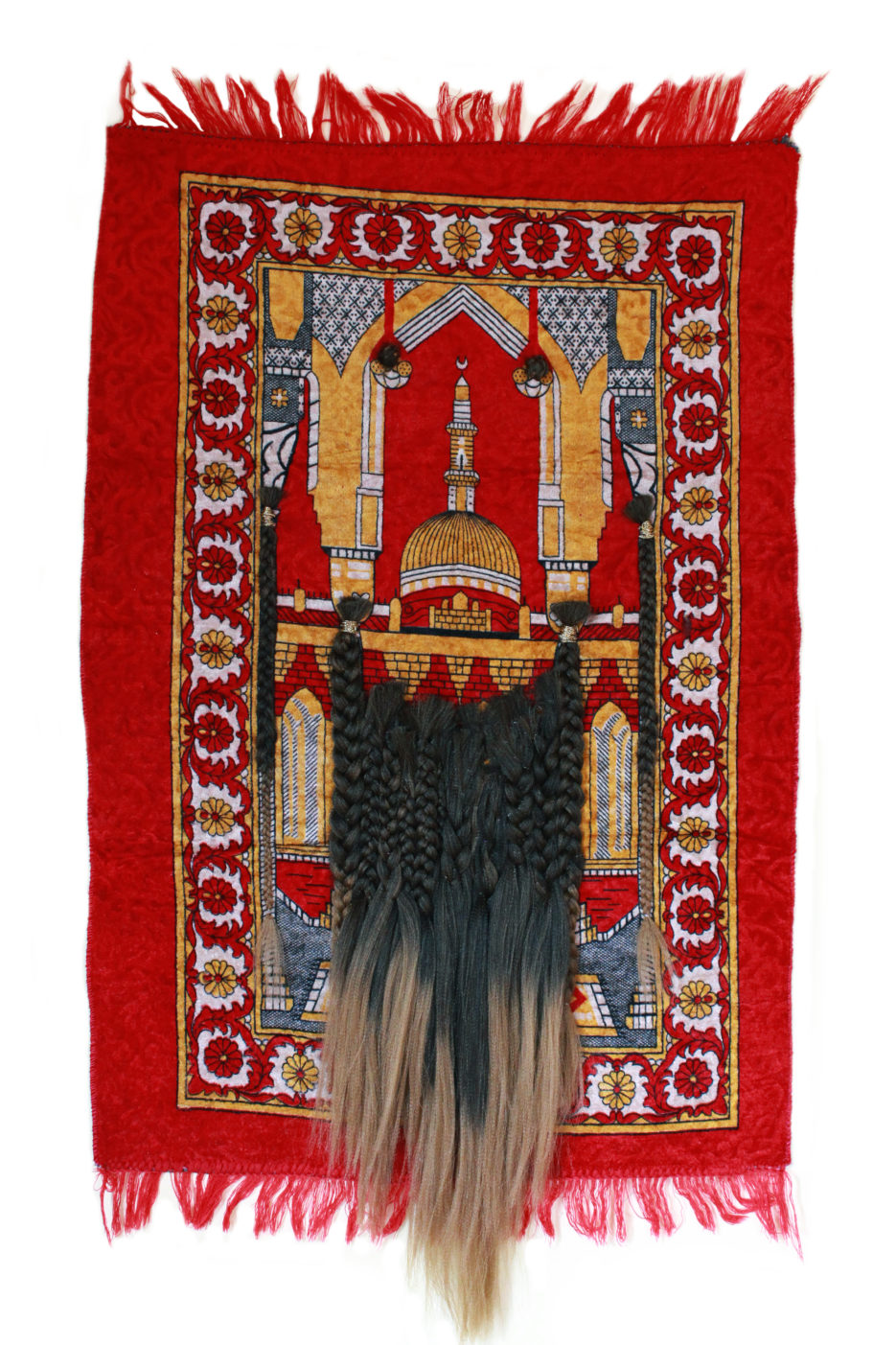 How does memory come into play with your work?

When I think about my childhood I pretty much picture myself playing with Barbie and creating the perfect Barbie wonderland with my younger sister. I played with Barbie because I was under the age of 13 and in my head at the time I didn’t think Fulla was as glamorous as a Barbie. Which is why materials I have used in my work such as nail polish, hair extensions and bedazzles screamed Barbie more than it screamed Fulla. Upon receiving my Fulla doll from Mekkah at the age of ten I neglected to find the attraction towards the doll and continued playing my original Barbie’s. As I got older I started to realize that behind Fulla’s robe and hijab was Barbie and that they were the same doll. 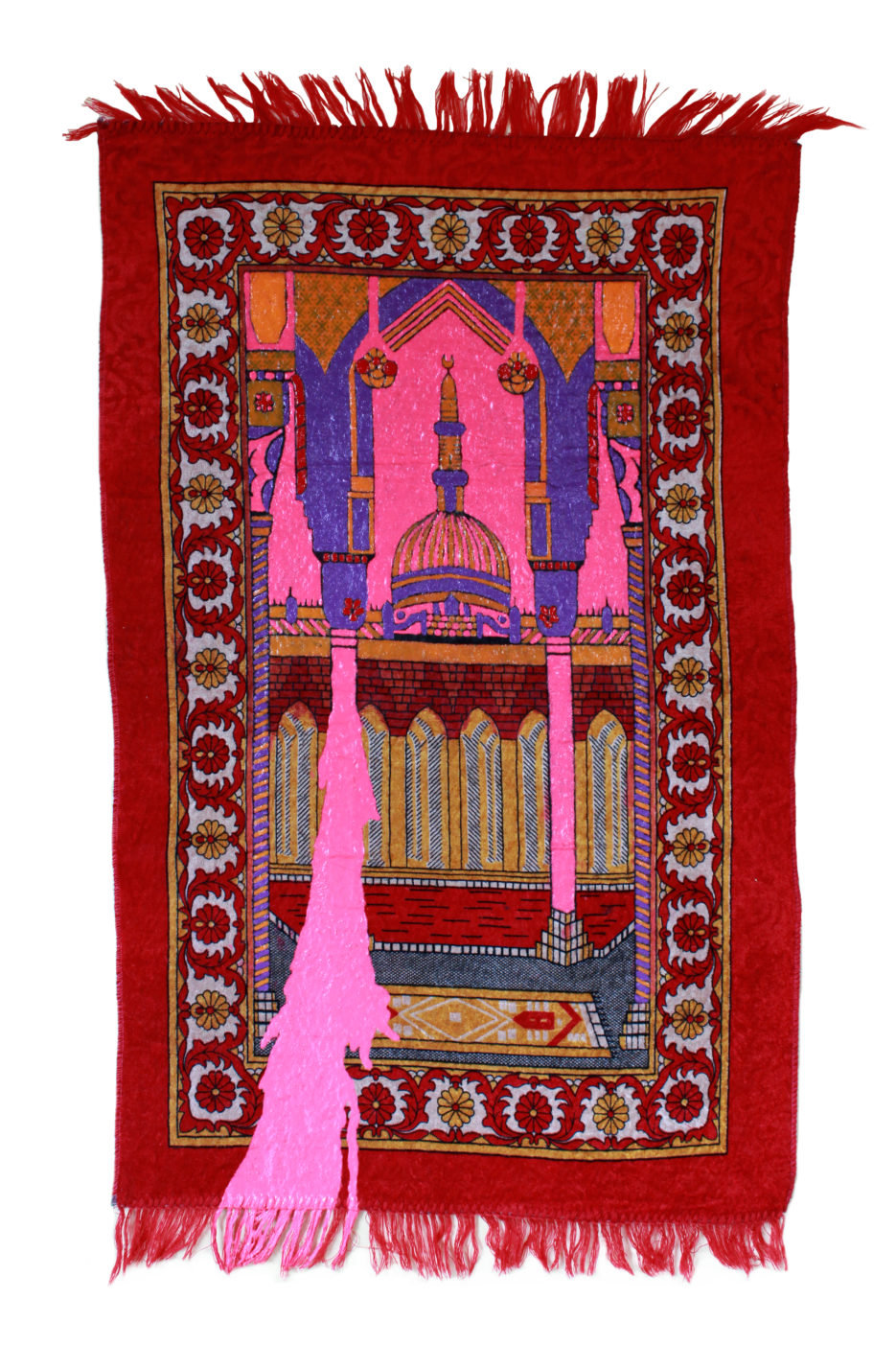 You work in mixed media including moving image and installation art. How does this influence your work? Do you find different artistic forms can express different things?

Yes definitely. The first time I exhibited ‘Fulla’ on the floor with spotlights on each prayer mat in complete darkness. The second time I hung ‘Fulla’ on the wall. In a room of darkness with light shining on sacred prayer mats being embellished I wanted viewers to feel like they were in a holy space. Only when they look closely they will see that the prayer mats are not just prayer mats. On the wall ‘Fulla’ was glorified. ‘Fulla’ looked right at the viewer, confronting the viewer. ‘Fulla’ comes out of hiding. ‘Fulla’ becomes the gaze. 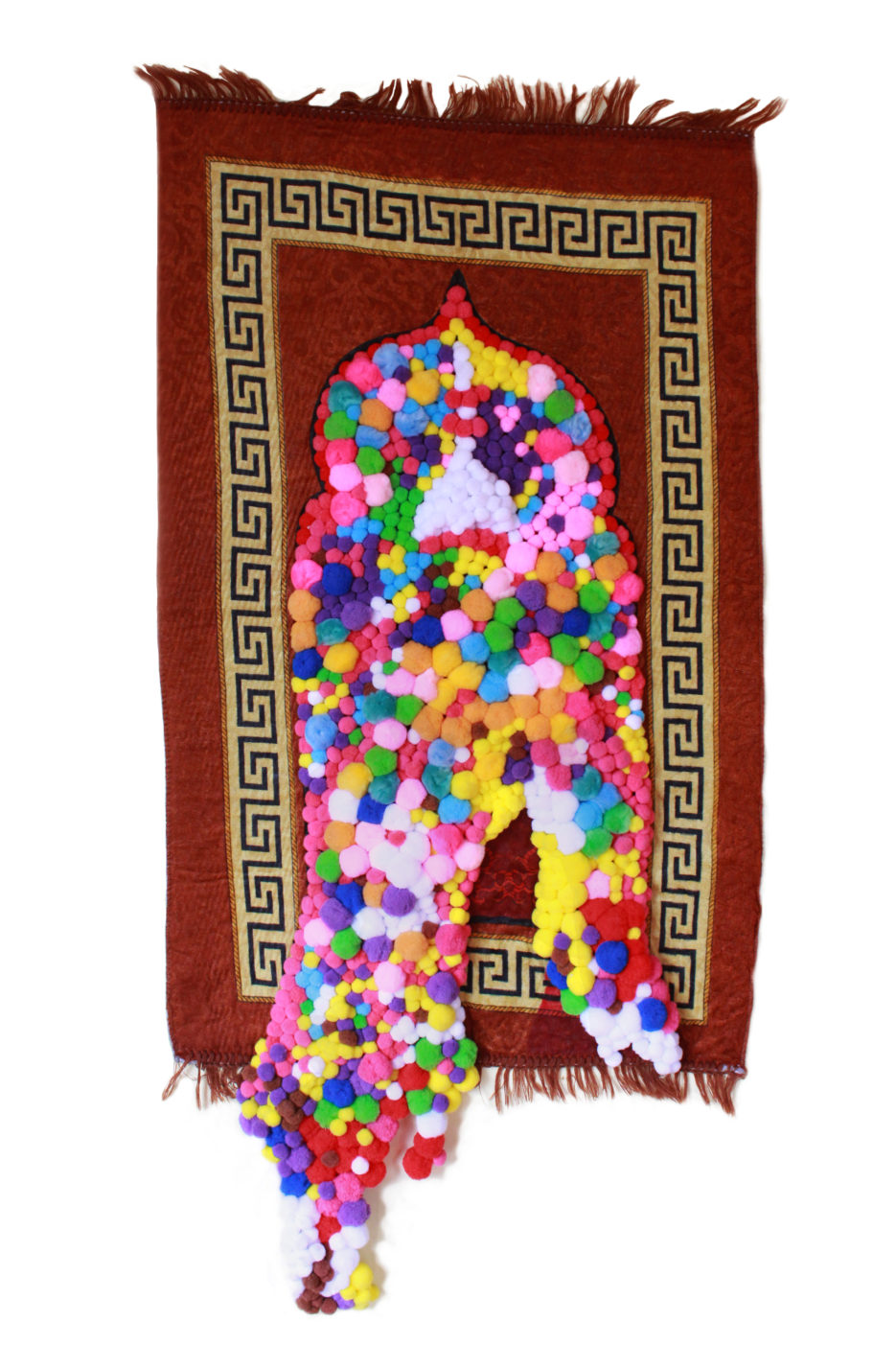 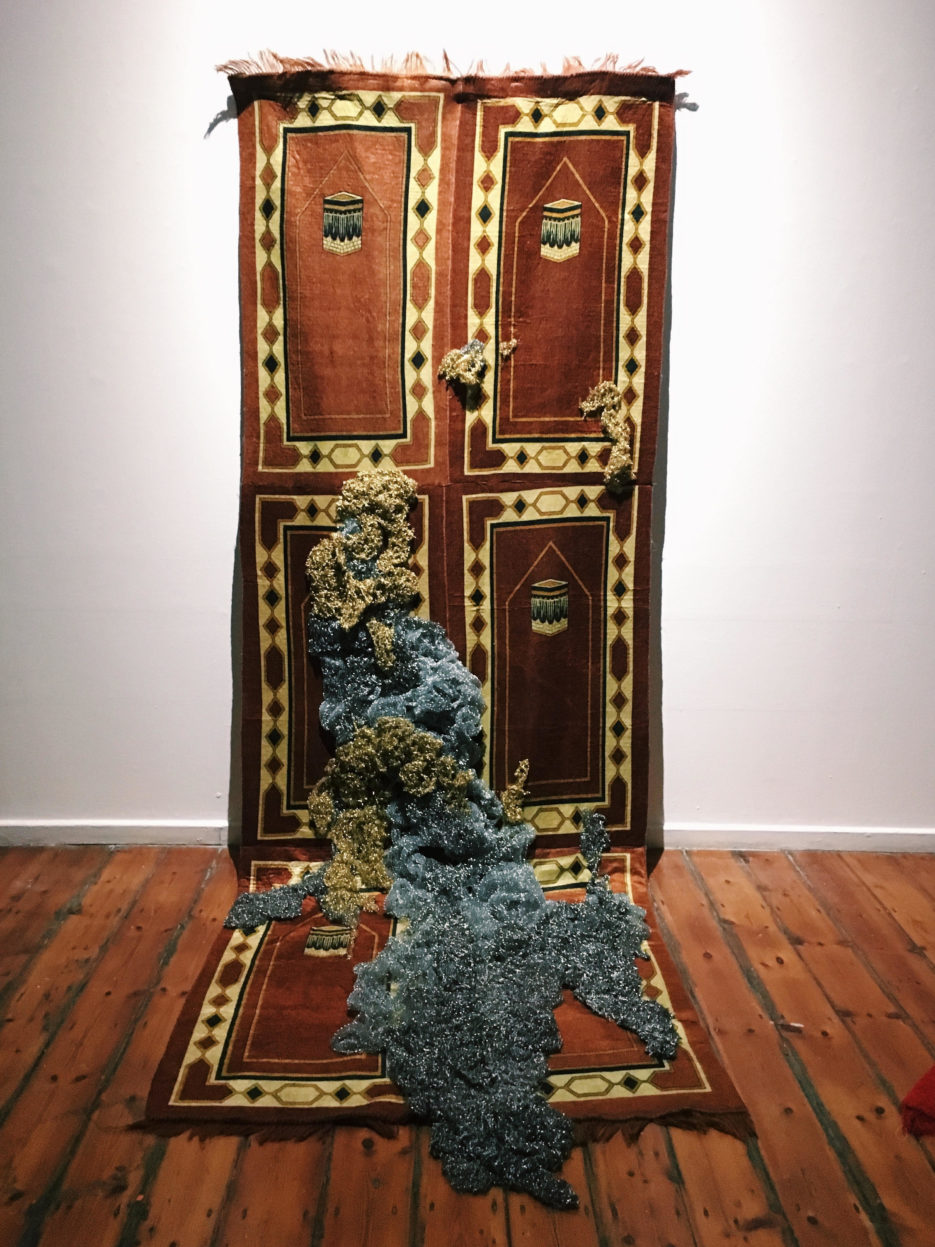 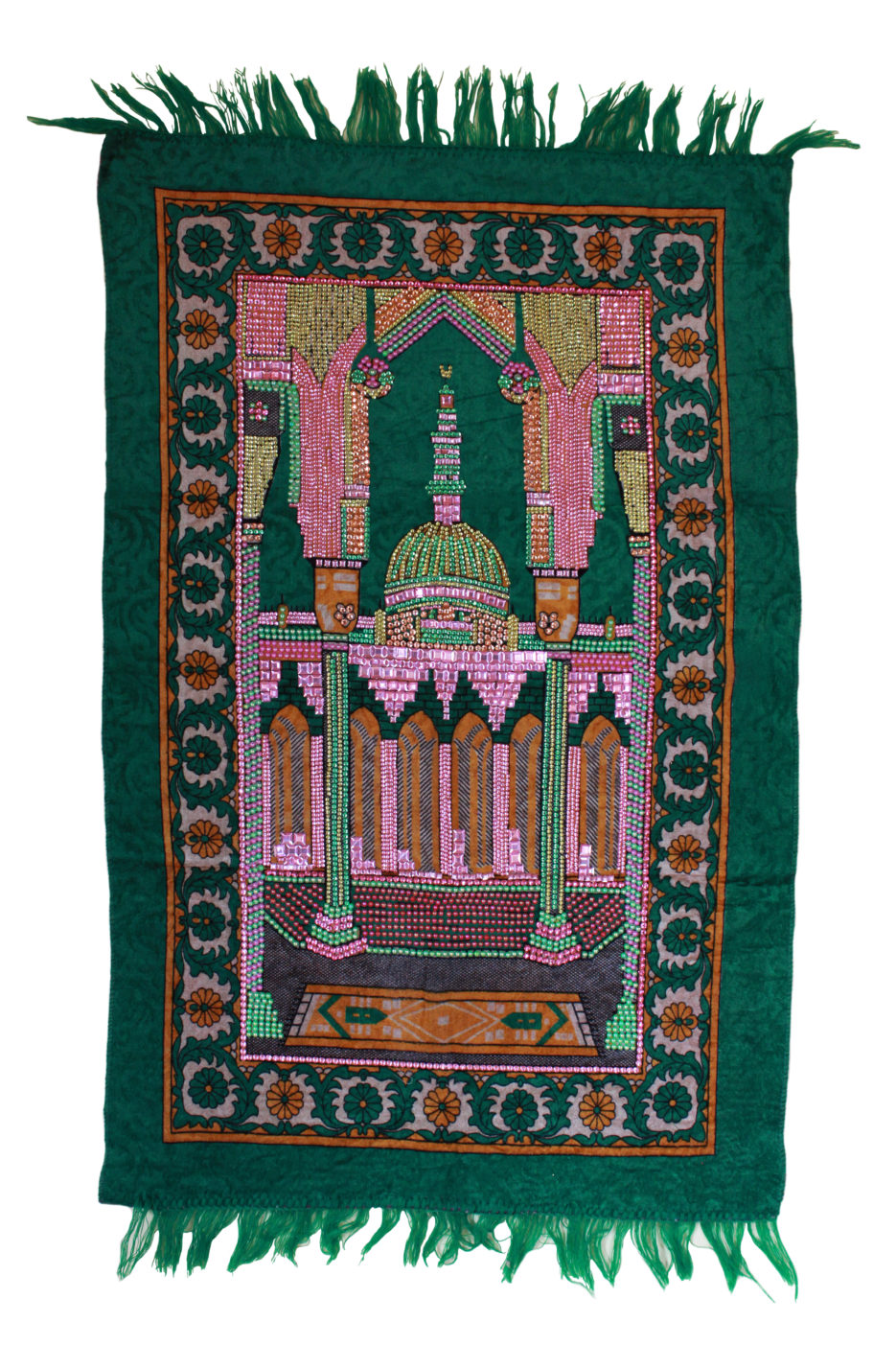