Posted at 09:42h in Music, Uncategorized by Nikki Zakkas
0 Likes

Each week, we bring to you some of our favourite undercover producers/DJs. These are the people who are well-known to create work in one field but who should, in fact, be known equally for the music they mix. From a multimedia artist in Cape Town to a teacher in Los Angeles, check out our ongoing series of undercover selectors.

This week’s all vinyl mix comes courtesy of social researcher and visual storyteller Zara Julius. Her selection of songs are like rays of sunlight, reminding us of the the beach and balmy weather. “On a superficial level, this mix is basically my thinking, ‘Yoh, I wish I was somewhere hot and humid.’

“To be honest, this is my wish every day. But what I like about this mix is that it speaks to my greater life project of trying to highlight the connections throughout the African continent and the diaspora in the global south. What are the sounds that have travelled in the kind of musical echo-chamber that exists in these contexts? There are psychedelic zouk tracks that I’ve put in here from Cape Verde that work really well chicha music from Peru, for example, because the same thread is there. It’s those threads that get me excited – apart from the very obvious fact that the track is killer,” she shares.

Press play on Zara’s exclusive mix and get to know the DJ below.

What are your early music influences?
So from a young age my parents always exposed me to music from the African continent – the usual suspects like Salif Keita, Youssou N’dour, Ali Farka Toure, Ismaël Lo and then obviously the South African giants, like Miriam Makeba, Sipho Gumede, and Abdullah Ibrahim. We’d just listen to Adbullah [Ibrahim] on repeat on family road trips. But I never got into those sounds myself until a bit later in my teens. I first had to go through my angsty years. My dad exposed me to a lot of classic rock, like The Doors, Hendrix, Cream, and then I gradually got interested in street punk and heavy metal. I especially appreciated groove metal bands like Sepultura as a kid; those that were pushing the genre by incorporating indigenous music forms into their sound. My mom also has a really extensive library of CDs. She’s a true collector, and I used to dig through her archives after school. She put me on to Digable Planets and Jill Scott, for example…Basically I’m really fortunate. My parents hooked me up with a good foundation.

What is your favourite Jozi venue and why?
I think Jozi is really struggling when it comes to music venues. My favourite, though, is probably Afrikan Freedom Station in Westdene. It’s a pan-African venue where people go especially to listen to and share music. It’s also pretty low key; the crowd is usually super warm and respectful, and it’s rare that folks are the in-your-face kind of drunk. These are things that I value. I’ve yet to find a venue here that caters to my idea of a “turn up”, though. Dancehall Thursdays in the old Bassline in Newtown come fairly close. 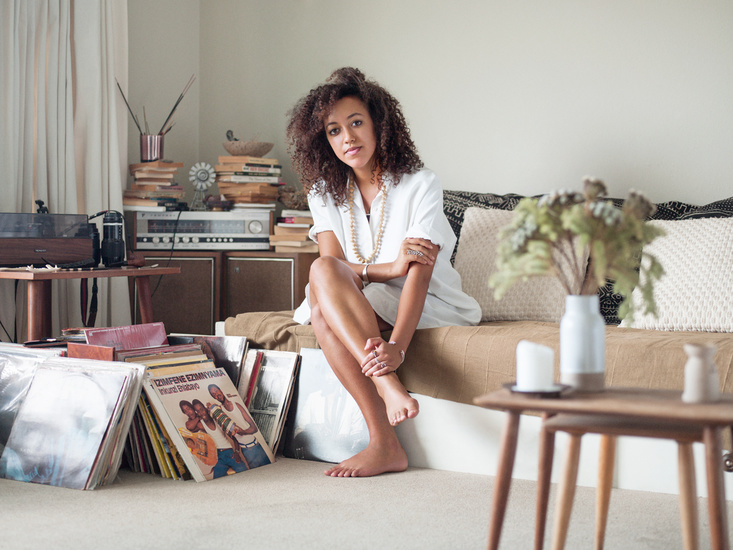 What is the first vinyl album that you bought?
I’m not sure. I think it was Herbie Hancock’s Head Hunters? I don’t know. Definitely a Herbie record.

Why do you choose to stick with vinyl when DJing?
Collecting vinyl came first, and then selecting followed, mainly because I wanted to share, not because I necessarily wanted to DJ. I don’t really buy much music digitally, unless it’s stuff that’s difficult to access on wax, like global cellphone music. I find vinyl as a medium really slows down your listening and relationship with your music – each album is an investment. There’s also something I love in the ritual of packing a crate of records before a gig. It pushes you to know your music really well. But yea, it’s definitely an impractical and expensive exercise.

What are the top tracks getting heavy rotation on your turn tables at the moment?
I’m in the process of putting together a lecture series on Cuban rumba/ bembé music and reggaeton, so there’s a lot of those sounds playing at the moment.

There’s also an anthology of Afro-Cuban folkloric music I picked up in Havana. It’s a great live recording of a Fiesta de Bembé. But usually, give me any version/cover of Little Willie John’s Fever and that thing will be on repeat at home and in the club.

I’m really not a gear-head; it’s an expensive wormhole. I’m just here for the music.

Could you tell us a little bit about the equipment that you use when DJing?
The most important gear for me are my Sennheiser HD 25-1 II headphones. They’re pretty much industry standard. I also just bought a set of Shure m44-7 cartridges. It’s important to get a set of scratch needles that give you the best sound in the high and low ranges, but that also aren’t too harsh on your wax.