Acclaimed performance artist Desire Marea recently sat down to interview Lagos-born, Joburg-based Negiste Yesside Johnson, an emerging artist whose video trilogy is currently on exhibition at the AVA gallery in Cape Town. One of the videos, Phase One – Agwo (Pink), will screen at Movimenti di Macchina, in Venice and the International Video Art Festival in Madrid during May.

Hi, my name is Desire Marea and I am the half mother of performance duo FAKA. I first met Negiste Yesside Johnson in 2011, through her tumblr blog Awe, Ma Se Kind!!! Naturally, you might be reluctant to engage with the prospective wankiness of “another tumblr artist being hyped in 2017” but actually, in retrospect, Negiste’s blog was the quintessential portal of cultural possibility at the time. At least for me. She occasionally documented herself, her surroundings, her friends but mostly she’d be curating the creative output that has defined our time till today, with a special focus on work that fell within the tonality suggested by her blog’s title – authentic, relatable, with the painful romance of nostalgia holding it together.

Today, six years later, she has a show, The Opalescent Abdication Of Godot AKA Sometimes Shit Hurts Bad All Over, running at Cape Town’s AVA Gallery until May 13. By the time I finished pronouncing the title, I was catapulted into that era of photobooth selfies and Windows 95 gifs that saw icons like Johnson take the lead in reimagining a new creative South Africa, something her current work still does, only with an effortless maturity.

We got to play Noeleen. (Read the edited transcript below)

Desire Marea: Hi Negiste, please could you introduce yourself.

Negiste Johnson: Hi my name is Negiste Yeside Johnson and I am a polymath.

NJ: A polymath, bbz. A person of wide knowledge or learning. It’s like basically a multi-disciplinary artist.

DM: Oh, a polymath. Me too. So, thank you for coming to my house and sitting on my beautiful couch. I’ve been following your work and for those of you who don’t know, and I’m really honoured to speak to you about your show called the…

NJ: It hurts real bad all over, I kinda change it all the time. Sometimes it’s bad in one place but sometimes it hurts all over.

DM: What does that mean?

NJ: There are certain pains you go through in life that you can’t necessarily explain to someone else but they are pains that take over your whole body; the mental, spiritual and physical, and it hurts everything around you. Everything around you reminds you of this pain, and is creating or generating a pain.

DM: I see that in your work there’s also the idea of healing. The healing process is quite prominent. What are some of the things that you’ve needed to heal yourself from?

NJ: Life. I needed to heal myself … existing in [a past] abusive relationship was a trigger for understanding what I needed to heal from. Which I think was a blessing. It was also a trigger for other suppressed traumas that I did not deal with, like losing a parent at a young age and not having a present father. Or having a lot of relationships with friends and family that weren’t really concrete. And also healing from my own self-disappointment and my own expectations of my life that I never actually managed to attain.

DM: I’m glad, but did it work actually? Because a lot of artists say I’m creating this work to heal myself or to heal people. Did you find yourself healed?

NJ: Yes, it was a cathartic experience. It wasn’t like a remedy in itself; like the performance video was created and then everything was resolved. But it’s just an ongoing conversation that I have with myself. So yes, it did allow for me to heal myself.

DM: When you’re doing work about something quite personal, like an abusive relationship, and the process forces you to revisit things that have happened before – that might have been traumatic – how does that leave your relationship with your work?

NJ: It can be a bit triggering. There are three phases [of this body of work], three films. So if I find myself in a really down state, I won’t go and watch a phase or a film. Because it will remind me of certain things that I don’t want to feel. But sometimes, I’ll go and watch it because it makes me feel so empowered [and thinking], ‘This was you six months ago, you were crawling on concrete floors, crying’. And later I’m like, ‘You’re here’.

DM: I also see that the videos all have quite a distinct colour. What role does colour play in this body of work?

NJ: For the first video and phase, titled Phase One – Agwo (Pink) [“Agwo” is “heal” in Igbo], the colour palate came from Shakespeare House, which was like an artist intervention done by Yazmany Arboleda and a few other artists highlighting the housing crisis in Johannesburg. So, you see this bright pink in this grimy city and you’re like what is this, why is this so pretty?

DM: Didn’t they do the same thing to Clegg House?

NJ: Yeah, they did it in a few abandoned buildings in Johannesburg and so it’s great that you noticed that. When I first saw the building a few years ago, I was like yho! I loved how soft the pink was, [like] vaginal hues. So with the first video I was in a very sensitive space and I needed to be soft with myself, and so that is why that one is pink. With the blue phase two video [Phase Two- Working Title Untitled: Pęlę (Blue)], I was going through a cleansing period and wanting to create a sanctuary, which can be difficult to find living in the [Joburg] CBD. So, blue like sky and water. It’s very obvious. The yellow I took from Yoruba culture. There’s a river called the Oshun River, which is the river goddess for fertility and new beginnings. So, the yellow is like new beginning and the black, the dark.

DM: I read somewhere that you used the abandoned building as a metaphor for yourself…

NJ: I became fascinated with that building from 2015 and it became something of an obsession; I was very curious about it. And I guess I didn’t feel comfortable enough to speak to my friends and family about what I was experiencing emotionally. So the only way I could talk about it was to this building because I knew that it wasn’t going to say anything back. 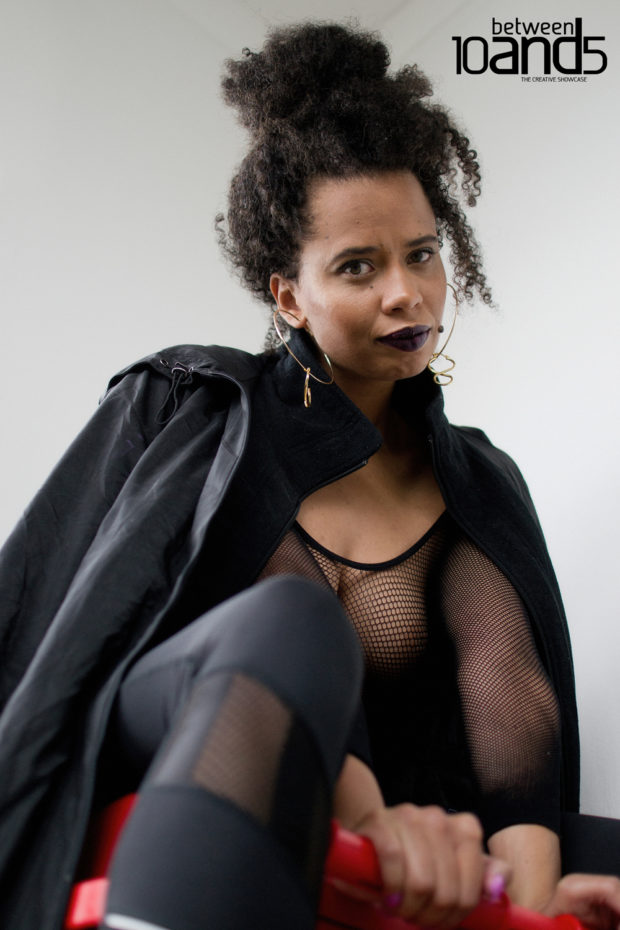 DM: How did you get to a point of using a building as a metaphor for yourself?

NJ: Relating to the building; it was created for a reason, it was filled, it was used and then it started to deteriorate. And now it’s left there standing empty. It’s obvious that it exists and that no one wants to engage with it because it’s dilapidated. There’s a fear of what lies within it. And that’s what a lot of people who exit abusive relationships or are damaged are seen as. People tend to stay away and become very aware of it.

It’s important to acknowledge it and say, hey I see you. Yeah, shit’s rough right now but I’m here and even though all these people walk past you every day, I see you and I’ll take care of you and I’ll love you for the little time that I’m shooting here and that’s basically what it was.

DM: Can you share a bit about your background, and where you grew up?

NJ: I was born in Lagos, stayed there until I was six and then I emigrated to Harare with my mom for a year. Then we moved to South Africa and I lived in Soweto for a little bit. We had a small community in Soweto and that was dope. I’ve lived in multiple areas/suburbs in Johannesburg. Then much later in London in 2011. That’s when I started the Tumblr because I was missing home.

DM: How was that; I mean being in foreign country?

NJ: I’m half English, half Nigerian. So it’s foreign in the sense that culturally I can’t relate to it but it’s a great city for you to find yourself and gain a sense of independence. But like anywhere you are, you have to make it what you want out of life. 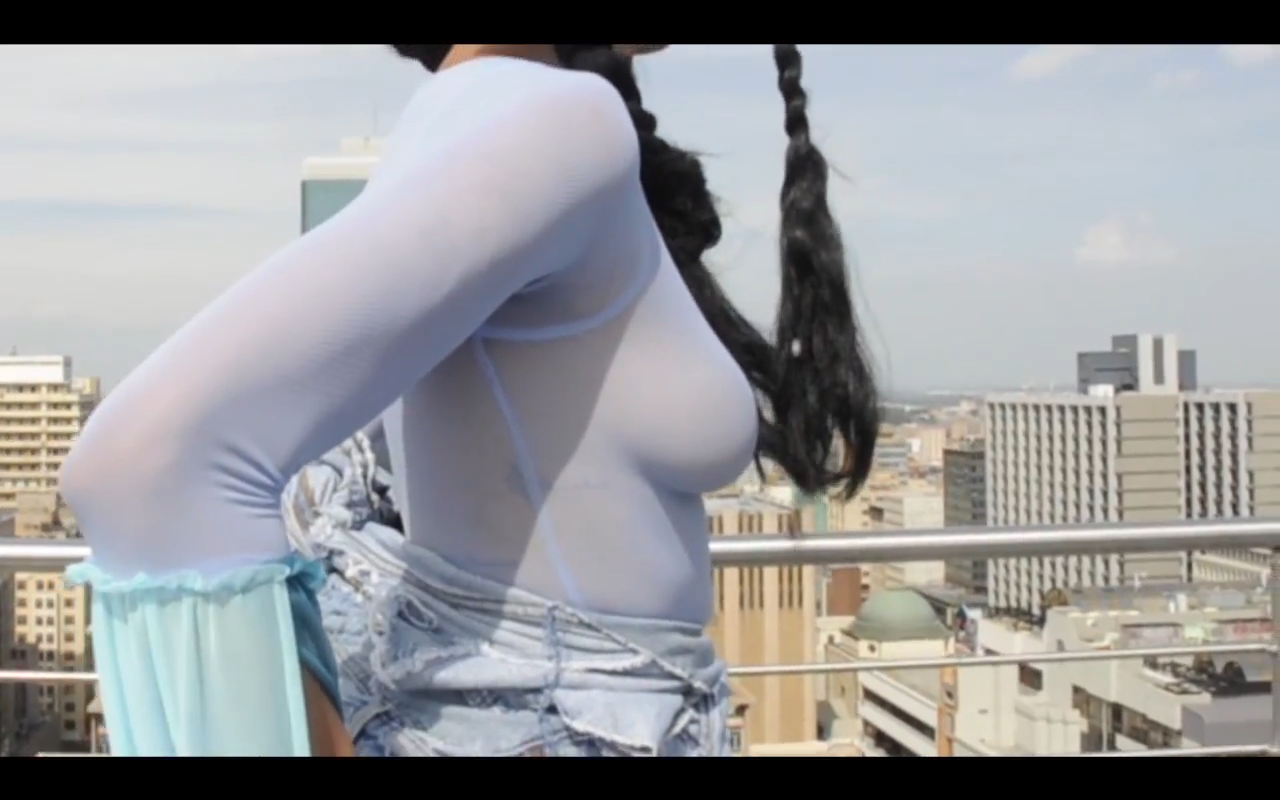 DM: I’ve made an observation, which might be a bit contradictory for me to say because I’m also an artist who has sort of made identity the forefront of the work even though it’s not the work. But there’s this pressure, this cultural shift where more people are celebrating work that deals with identity. Do you ever as an artist ever feel pressure to create work in that framework?

NJ: Definitely, because that’s what marketable right now and that’s going to help me sustain my life. But I also know I’m not ready to have a conversation about that publicly; my identity is so layered and so complex it’s going to take a long time to unpack it and process. I’ve started having that conversation with myself but I’m not gonna be pressured into having it for consumption. There’s enough people having that conversation right now and it’s not very authentic.

DM: So what are you listening to?

NJ: I’ve been listening to Le1f, Babyfather, Rotary Connection, Bjork obviously because her recent album has been amazing. Also, like, trap music has been quite constant in my life, I won’t lie.

DM: Music also plays a huge role in your work. I mean you collaborated with producer Hlasko on this body of work [as well as Brandon Covington Sam-Sumana aka N-Prolenta and Mohato Lekena aka Wildebeats]. While creating this work, was there cohesion when you’re working with so many different creative minds?

NJ: I think my film school background helped a lot in that regard because as a producer or a director you are working with an entire crew and there’s a specific brief or narrative you have to disseminate. I was clear on my narrative and I think because I also have a relationship with each of the people that I collaborated with, they were all aware of my narratives and so they understood the work better than any person would have. I trusted them completely to do something I would love and that’s what matters.

DM: So you being this multi-faceted person, are you ever going to produce any music for yourself?

NJ: I mean I kind of did with the last phase, the last video because we remixed the…

NJ: Yes, I really wanted to put vocals on that but I wasn’t strong enough at the time. 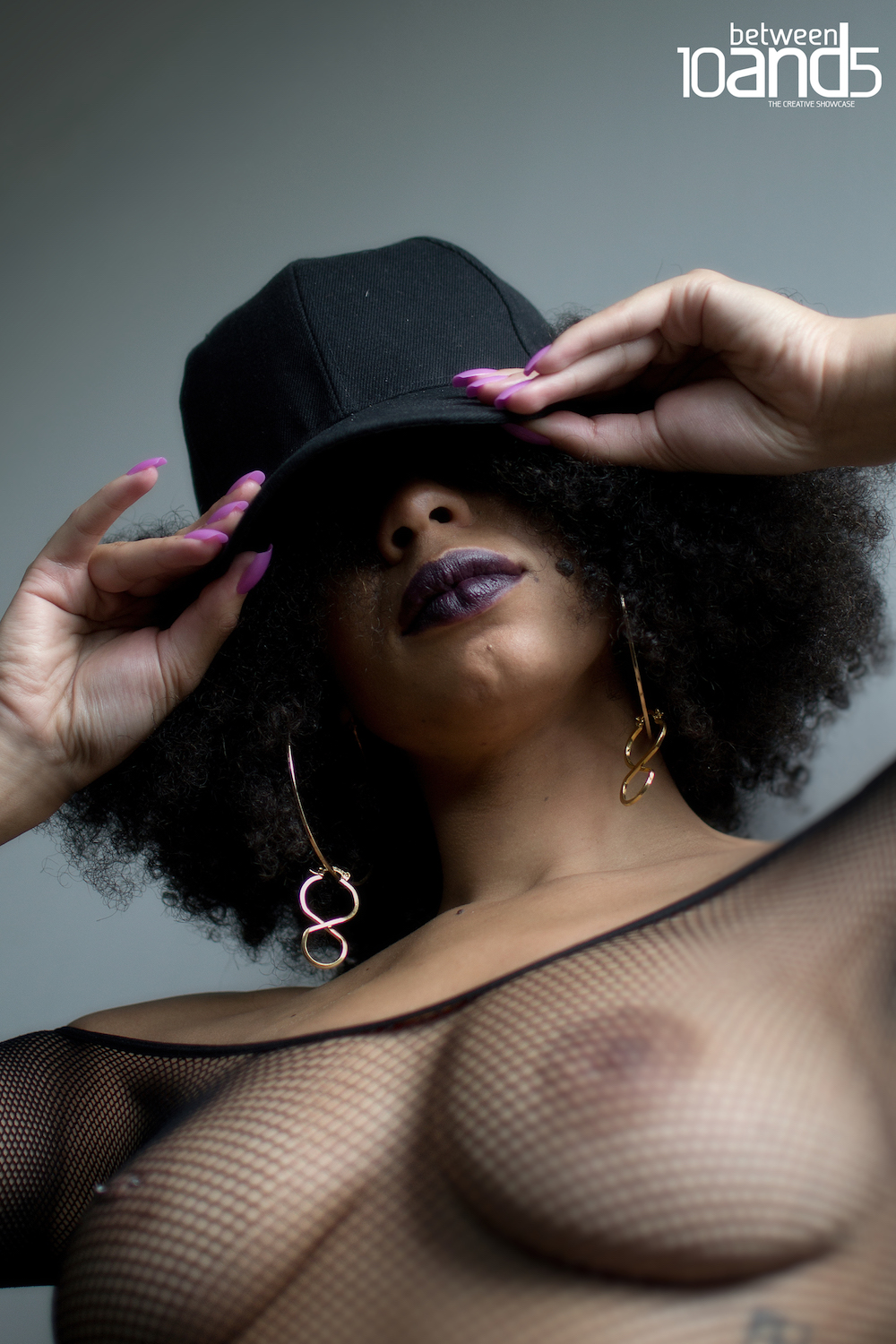 DM: So, I’m gonna ask you a few questions and you’re gonna have to answer quickly. The first one, who is your favourite artist?

NJ: I think my mom would be my favourite artist Tyna Onwudiwe. She was incredible, and a bit of a polymath. She was a musician in Nigeria and she also helped nurture a lot of the creative talent and community in Nigeria and South African creative community. When we emigrated here, she worked with Ringo Madlingozi and Yvonne Chaka-Chaka, and had a very pan-Africanist way of thinking.

DM: And then your favourite jol? 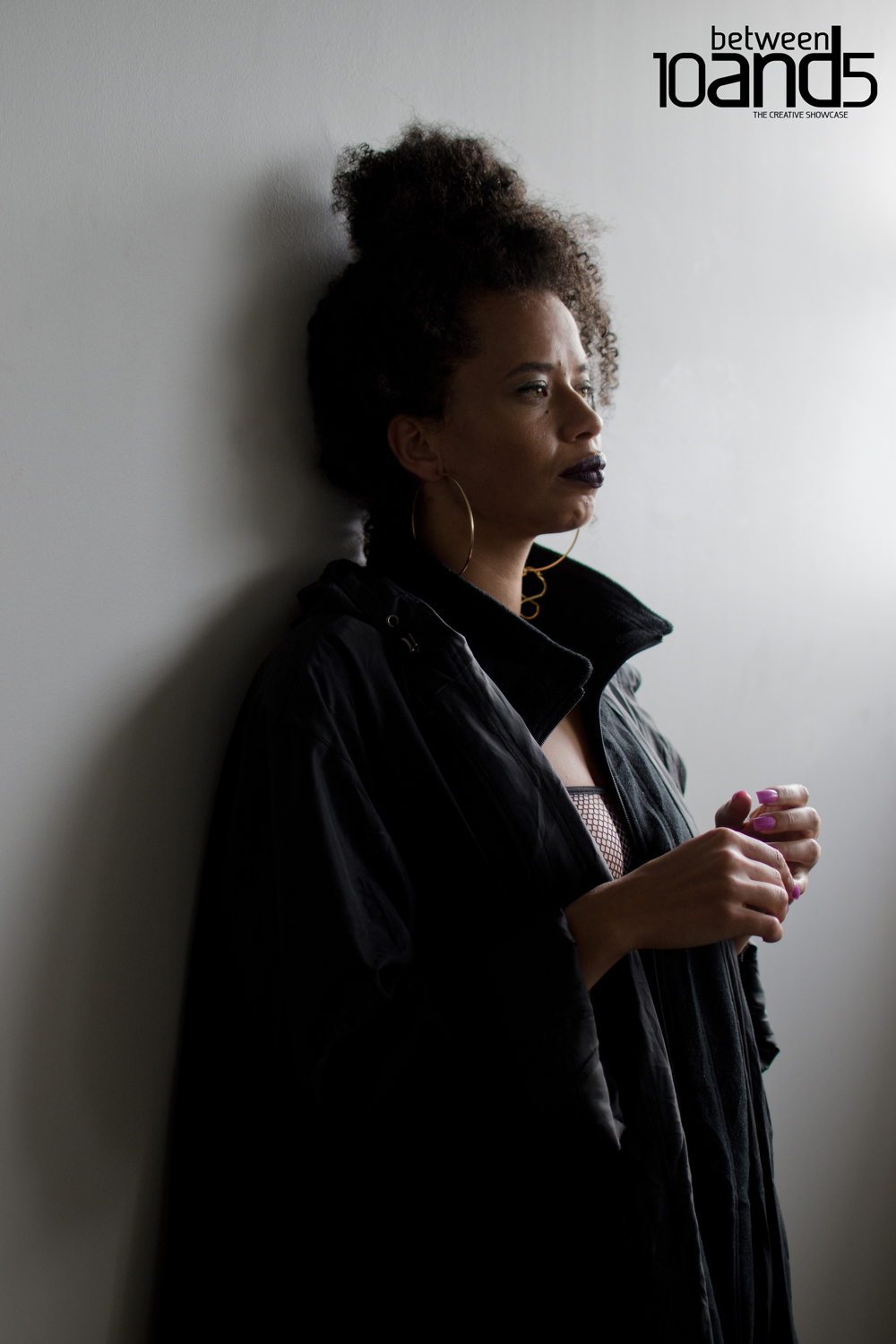 DM: I thought it was gonna be ‘aweh’ but…

NJ: Nope.That would be cultural appropriation or stereotyping. In South Africa I am often mistaken for coloured race but I’m mixed race; I’m half-black, half-white. But the play on my Tumblr title Awe Ma Se Kind is due to being mistaken for coloured and ‘Aweh Ma Se Kind’ is a saying used within the coloured community used as a shout out basically. I took the ‘h’ out to make it ‘Awe’ and ‘Ma Se kind’ is ‘mother’s child’, acknowledging being in awe of the glory of my mother’s creation, which is me.

DM: Thank you so much for speaking to me.