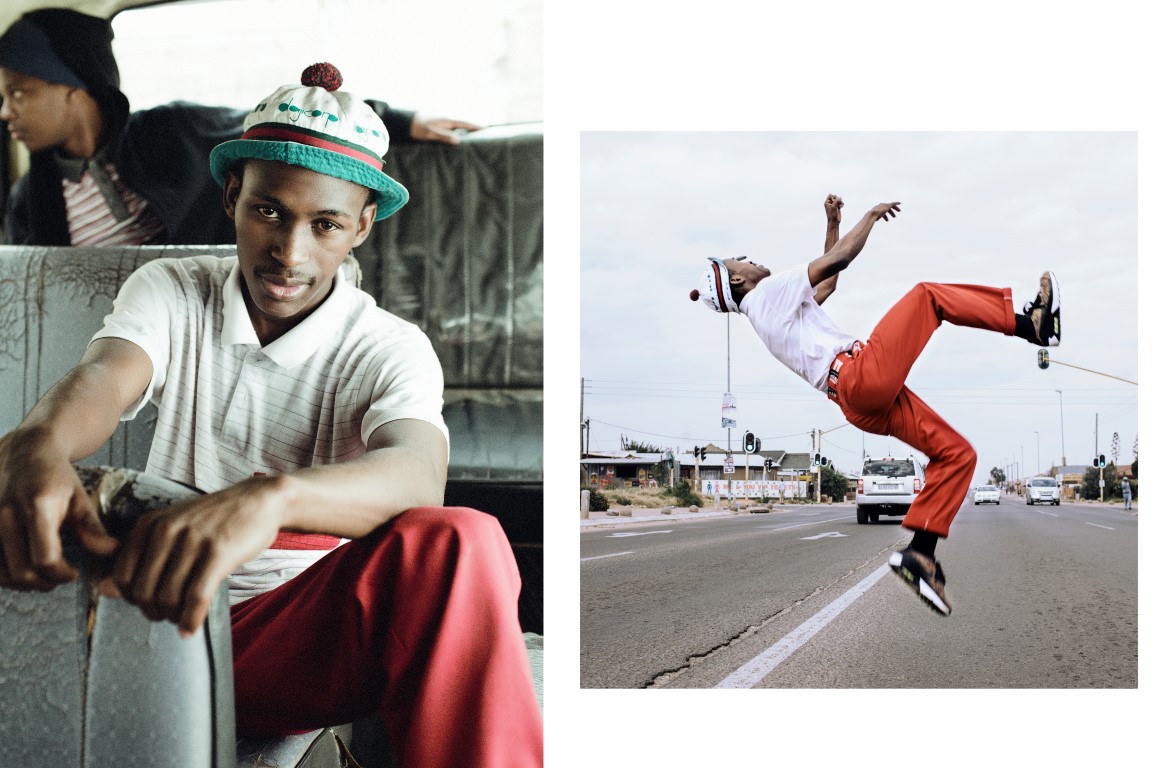 15 May Spotlight: Photographer Lesedi Mothoagae and choreographer Teboho Diphehlo get down with pantsula

Posted at 15:02h in Dance, Photography by Gabriella Pinto
0 Likes

Spotlight is a new collaborative series by 10and5 and photographers of RISE, a mentorship programme by creative agency Lampost. Each week, starting 15 May, we highlight local creatives working behind the scenes and making a powerful impact on their industry. From a pantsula choreographer, to a publishing duo and more, photographers such as Andile Buka, Aart Verrips and Tatenda Chidora capture these game changers, while 10and5 shares their stories and original photography.

“The stories I choose to tell are about the townships. I’m a township boy, and that is the one place I know so well, that’s the one place I carry with me wherever I go,” says digital media designer and photographer Lesedi Mothoagae, who took to his home of Kagiso, west of Johannesburg, to photograph award-winning pantsula choreographer and dancer Teboho Diphehlo.

The two chose to conceptualise a shoot showcasing and celebrating pantsula. As Teboho creates moves that honour pantsula dance, his choreography also incorporates new styles. “Pantsula is a culture that we have inherited from our forefathers, and we will pass it on to our grandchildren and their grandchildren,” says Teboho, co-owner and choreographer at dance company Intellectuals Pantsula.

Hailing from Naledi in Soweto, Teboho was crowned Best Solo Artist in 2013 at a dance competition hosted by Impilo Mapantsula, an organisation that supports and develops the living legacy of the dance form.

Lesedi’s understanding of dance resulted in him photographing Teboho with ease. “I used to be a dancer in my teens, and everyone would always want me to take pictures of them dancing way before I even thought of being a photographer,” says Lesedi Mothoagae, who graduated from the University of Johannesburg in Multimedia Technology Design last year and is part of Lampost’s RISE mentorship programme.

Lesedi, you’re a designer and photographer. What inspired you to pick up a camera?
Lesedi: My love for sketching inspired me to pick up a camera. One of the biggest problems I had when I sketched was not being able to work without a reference. So I picked up a camera to photograph people’s faces, features or anything I wanted to freeze so that I could sketch it later on. Around that time I was learning Photoshop. That’s when I realised how powerful and beautiful the medium of photography is.

The stories I choose to tell are about the townships. I’m a township boy, and that is the one place I know so well, that’s the one place I carry with me wherever I go. I refer to the townships as labour camps because that’s where most of South Africans with low-income wages come from. My experience of using taxis in the early hours in the morning to get to campus on time for class, and me coming back late hours at night, made townships feel like temporary accommodation just to sleep to repeat it all again.

I have seen work by many creatives who have misrepresented the people in the townships. That’s one of the reasons I’m so inspired to tell stories about the townships – the good and the bad.

Teboho, tell us about your history with pantsula.
Teboho: During my childhood, I noticed the pantsula movement dominating the lifestyle and fashion market of South Africa. I was in primary school when I first saw a pantsula dance battle. I fell in love with how they dressed, danced, walked and how the crowd chanted for them. I wanted to be that person; someone who brings bliss to the people.

And how did you start dancing?
Teboho: I attended my first pantsula dance lesson with a dance crew in my community. Things didn’t go well there for me because I was a fast learner so I got bored repeating the same things over and over again. I then met Sthembiso Makhaya. His dancing partner was not around (he was sent away to do time), so he taught me how I should handle myself as an artist.

Sthembiso poured so much of his teachings into me and I drank deep. I even went beyond his imagination when putting together a dance choreography in my crew. That’s the main key element in dance, you first play by the basics and then you play by your heart. I am very fortunate of being able to draw inspiration from socioeconomic issues and the history of pantsula.

Can you tell us about your choreography style?
Teboho: I strive to bring something new to the market that will address the issues of creativity and audience development. I always invite elements from other dance genres with the purpose of building a bridge or a link between people with different dance backgrounds.

What do the origins of pantsula reveal to us about South Africa’s history?
Teboho: It is indigenous in South Africa and has existed for over 50 years now. It has the power of influencing the lifestyles of many South Africans today including me. People rejected it many times because it was popularised or demonised as the tsotsi lifestyle. I think that was the effects of apartheid. People in the townships understood pantsula, and it later became a well-recognised art form.

Lesedi, much of your work is portrait photography. What’s the most important thing to capture when you’re photographing people?
Lesedi: Their human spirit. Everyone’s face has a story to tell. It can be deceiving, truthful, heroic, joyful, ugly or beautiful.

What appeals to you about photographing bodies in motion?
Lesedi: I approach every genre of photography differently. For my portraits and editorials, I borrow a lot of framing and colouring techniques from the cinema – Japanese cinematography mostly. I used to be a dancer in my teens and everyone would always want me to take pictures of them dancing; way before I even thought of being a photographer. I would shoot on a Sony Ericsson w800.

The images would come out too distorted, grainy and blocky with a lot of motion blur. Even when I shoot dancers on a DSLR, I always want to recreate the visual aesthetic I got from a cellphone.The most enchanting thing for me to photograph about dancers is to capture that nostalgic feeling of trying to relate to what they do as performers.

Teboho, how does your dancing experience inform your work as a choreographer?
Teboho: My dance experience feeds my choreographic approach, they work hand in hand. Mind you I am a dancer, and I know how dancers think. They are afraid of challenges and many of them stick to their territory of comfort. I take responsibility to unleash their potential when I’m in collaboration with them and that works positively on my dance chores. I mix the old tricks with the new ones just to make sure my dancers are happy because they are the ones that are going to perform and they are also my reflection.

This is a collaborative project. Tell us about the concept and style behind the shoot.
Lesedi: It’s about the joys of the township, and about a character that makes it a lively place to live in. Teboho teaches through dance and empowers so many of his peers through his passion for performance art. And, it’s also about the movement of the human spirit within the dance subculture pantsula.

Teboho: This collaboration was open-minded and drew inspiration from elements such as fashion, dance, township and photography. We wanted to build a bridge between pantsula and the current “umswenko” trend, which was initially introduced by the likes of collective BoyznBucks and its member, rapper Riky Rick.

Most of the photographs are colourful and that symbolises joy and happiness. We chose graffiti wall instead of shacks; we wanted to sell the dance form instead of the ghetto lifestyle. Pantsula is rich, so our collaboration was about breaking that cycle.

Lesedi, what did you aim to put across in these photos?
Lesedi: My intentions were to showcase how Teboho is introverted in character but can change in a few seconds when he’s dancing. He is expressive, powerful and entertaining. It almost becomes a display of physical strength and how far he can push the limits of his mind and body coordination. Tebza believes that pantsula has lived beyond the streets. Yes, it was birthed in the streets but it also has progressed. This dance subculture dreams of having an international market.

How do you hope to shape the future of pantsula, Teboho?
Teboho: I am going to take pantsula to the peaks of its greatness, together with my crew, Intellectuals Pantsula. I promote the culture everywhere I go. The kids and many people in my neighbourhood call me pantsula. I believe I am inspiring many people out there with the positive contribution I make every day in my neighbourhood and on my social media.

I am currently working on many projects that aim at empowering pantsula. The first one is City2City Pantsula Dance Workshops. This one aims at developing an audience and expanding Pantsula opportunities outside South Africa. The other one is Jozi Invasion Pantsula Dance Project, which aims to uplift pantsula.

I sometimes feel like pantsula is on the repeat mode where there’s no room for creativity and development of the actual dance moves, but I try with my crew to raise the bars higher so that pantsula can develop.