Posted at 15:04h in Art, Interviews by Louise McCann
0 Likes

Thenjiwe Niki Nkosi is a Joburg-based multi-form artist. Her Heroes series is about complicating the idea of who and what a hero is. We catch up with the artist to speak about her work being exhibited in the Being There exhibition at Foundation Louis Vuitton’s ‘Art/Africa, le nouvel atelier’ in Paris, and where she hopes to take her work in the future. 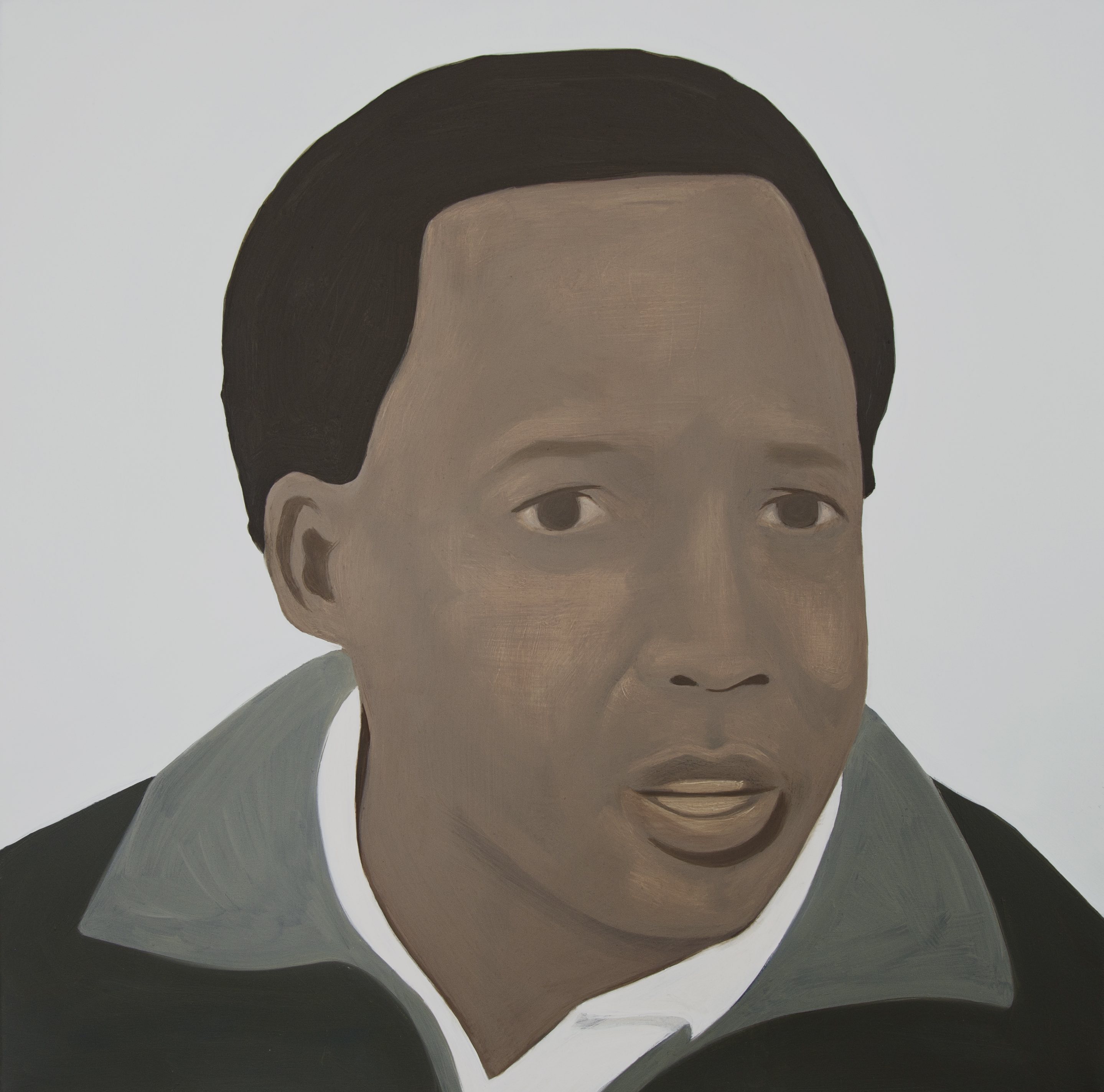 Hani (After Chris Hani) 2013. Oil on canvas. 50 x 50cm.
Leader of the South African Communist Party and chief of staff of Umkhonto We Sizwe (armed wing of the African National Congress). Assassinated in 1993.

Some of your works featured in the Being There exhibition were from your Heroes series exhibition in 2013, and others have been painted subsequently. Many of those artworks were sold, and you had let them go knowing you’d most likely never see them again. So what went through your mind when you saw them ‘in conversation with each other’ installed at eye level along two walls?
I was hyped to see them all together. One on level, it became a marker of passing time, revealing my progression as a painter over several years. And with the addition of seven newer works, this collection of people started to feel more powerful and actually like the pantheon I’d imagined I was building or creating. The paintings were always conceptualised to be in conversation with one another and the work is most powerful when all the “characters” convene. 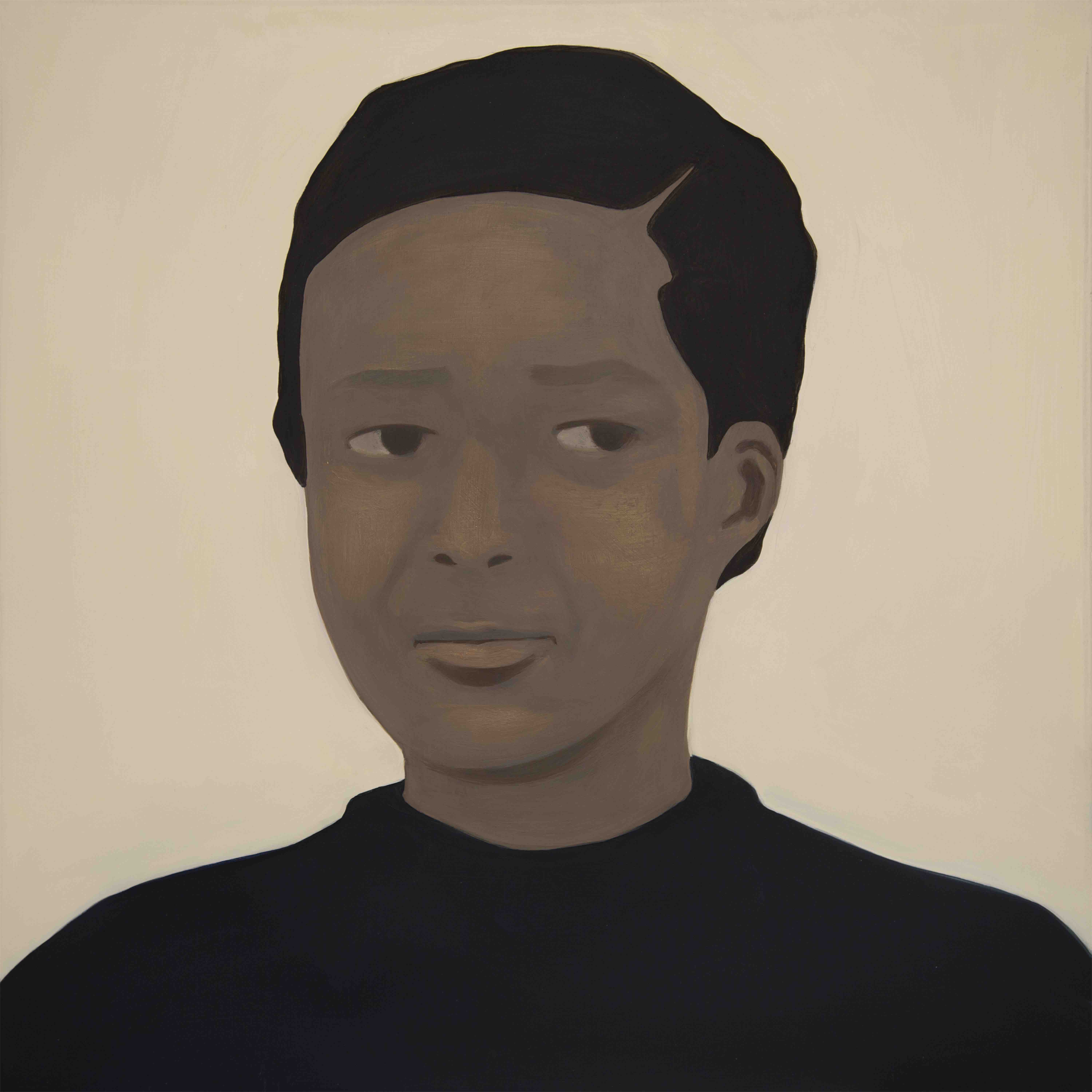 Head (After Bessie Head) 2013. Oil on canvas. 50 x 50cm.
Though born in South Africa, Head grew up in Botswana and is generally considered that country’s most influential writer. 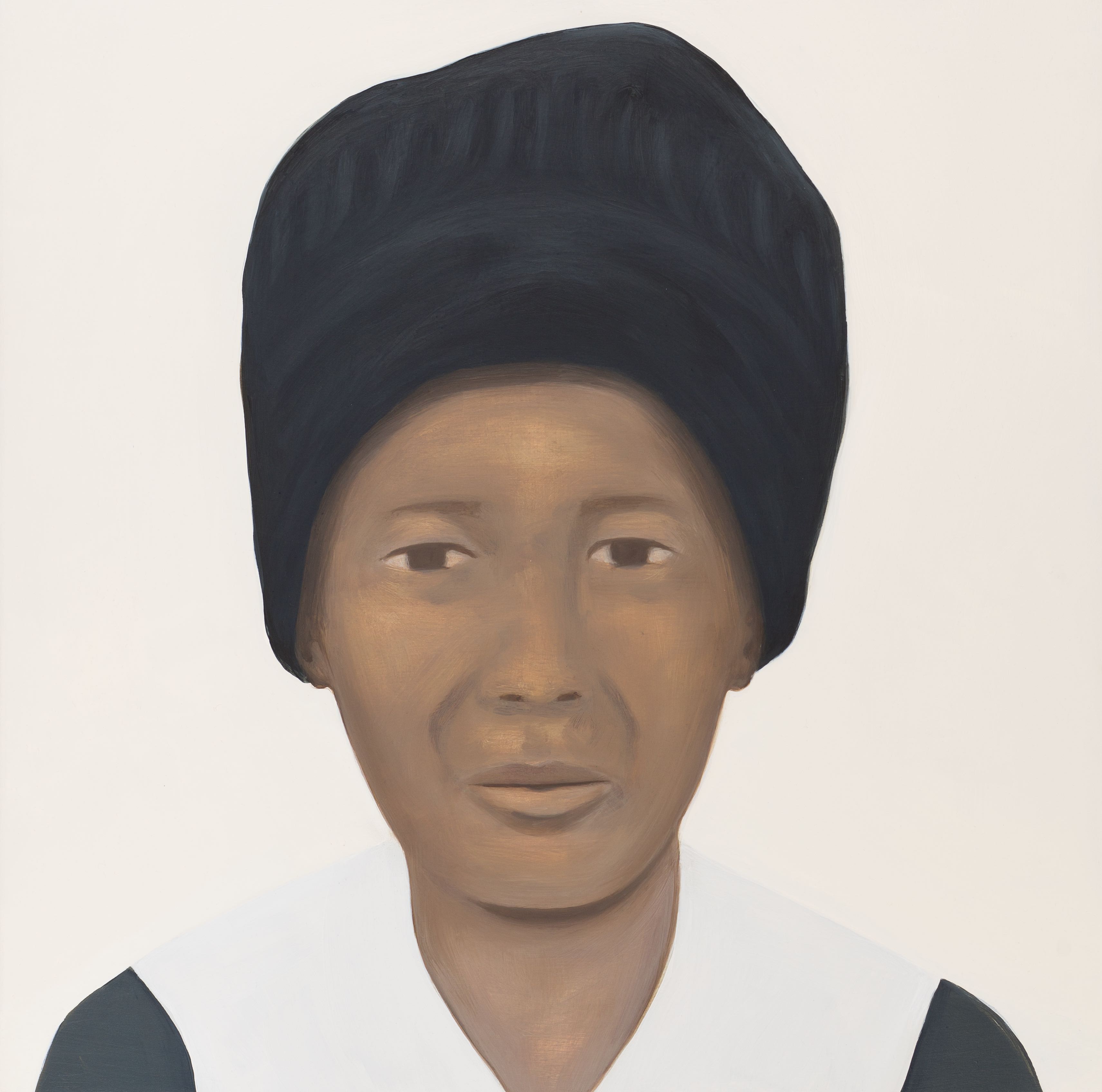 Sibolile (After Sibolile Nkosi) 2013. Oil on canvas. 50 x 50cm.
The artist’s great-grandmother and domestic worker for Paul Kruger, president of the South African Republic in the late 19th century. Born around 1870 and died in 1947.

Tell us about the opening of Being There.
I’m not one for openings so I’m probably not the best person to report on the event. But it was interesting getting feedback about my work from a European public, when in many ways this series was created for a specifically South African audience. In the South African context, I wanted people to play a game of “Do I recognise this face?” and “Should I recognise this face?”, and for this reason I didn’t title them too explicitly when they were first shown. That game is a bit lost on those not familiar with our context. So for Being There, the curators opted to have short descriptions of who each person is/was besides the work, and that got me thinking about how this series might function differently depending on where it’s shown. 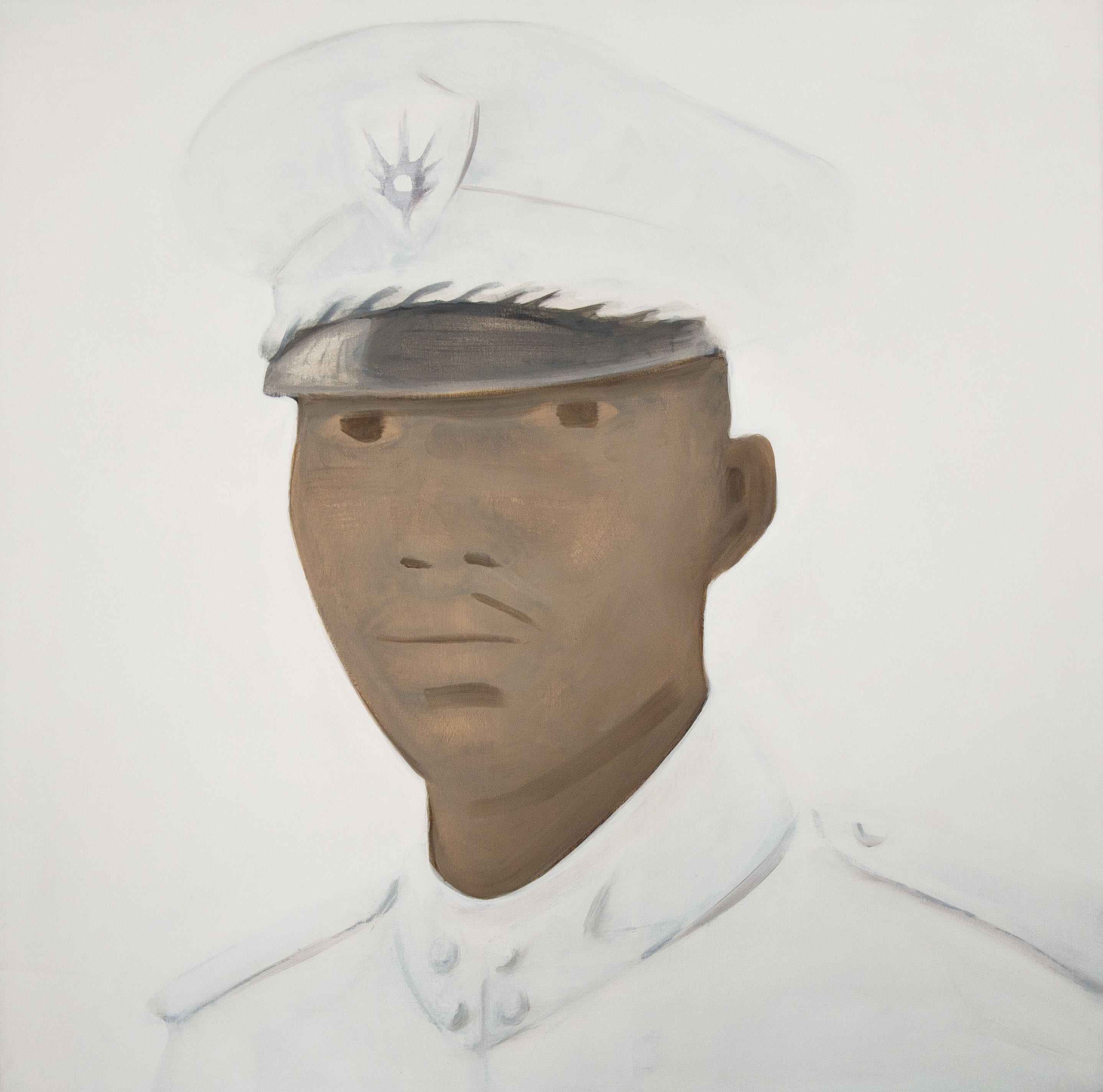 Upright Man (After Thomas Sankara) 2012. Oil on canvas. 50 x 50cm.
Pan-African theorist, revolutionary and president of Burkina Faso from 1983 until his assassination in 1987. 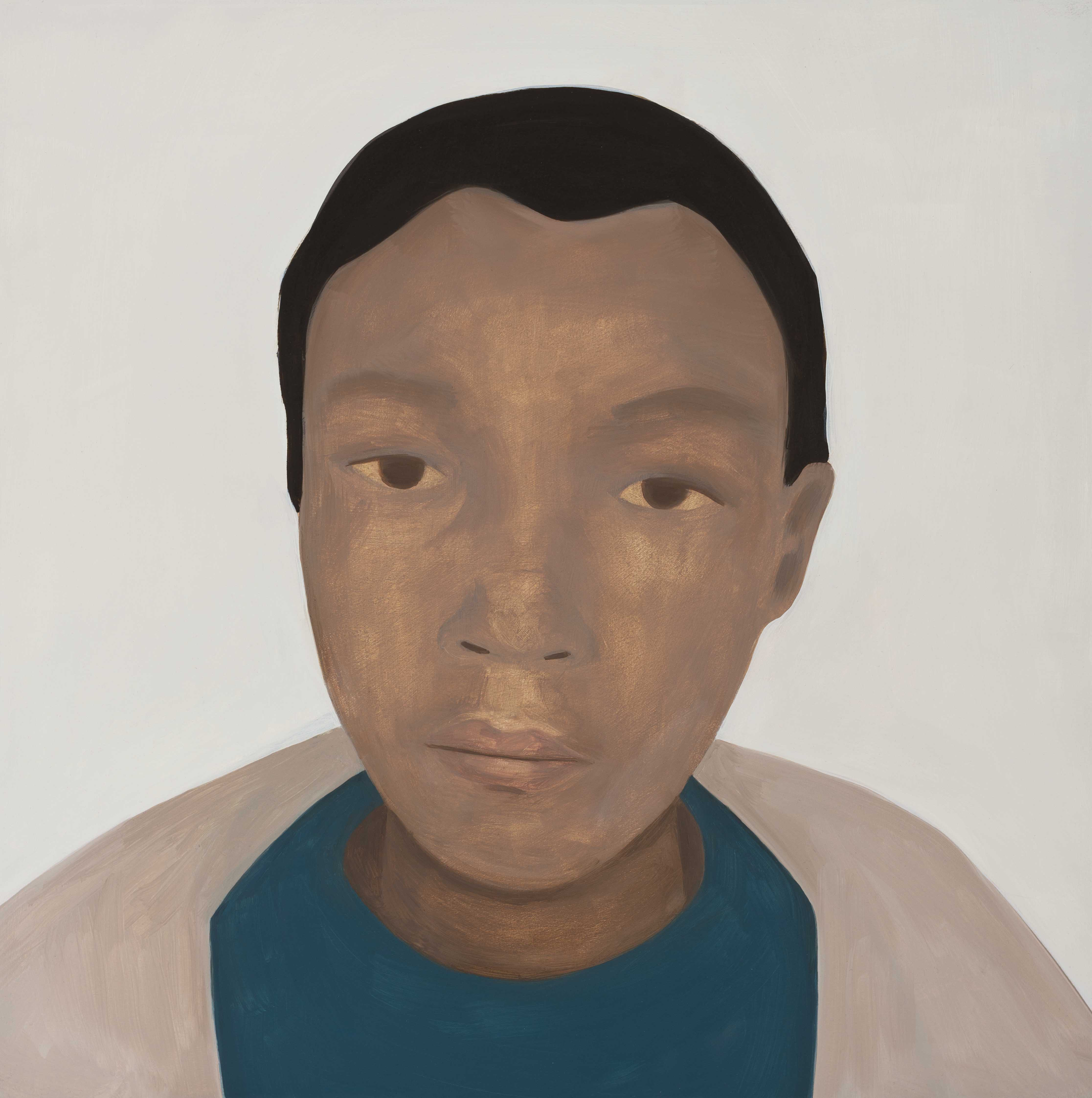 Anene (After Anene Booysen) 2013. Oil on canvas. 50 x 50cm.
Teenager raped and murdered in the Western Cape in 2013. Her story sparked a national conversation about rape in South Africa. In Nando’s UK collection.

In the past, you’ve said that you’ve considered your paintings as ‘side notes’ to your other work as an artist. Is this still the case?
I don’t know if I really meant “side notes”, in the sense of something peripheral or of secondary importance. Perhaps I meant more that they are they are sort of “working notes”, or ongoing notation. Painting is a way of thinking for me. Thinking through ideas, and maybe coming up with new theses that I might write about or use in another context later on. 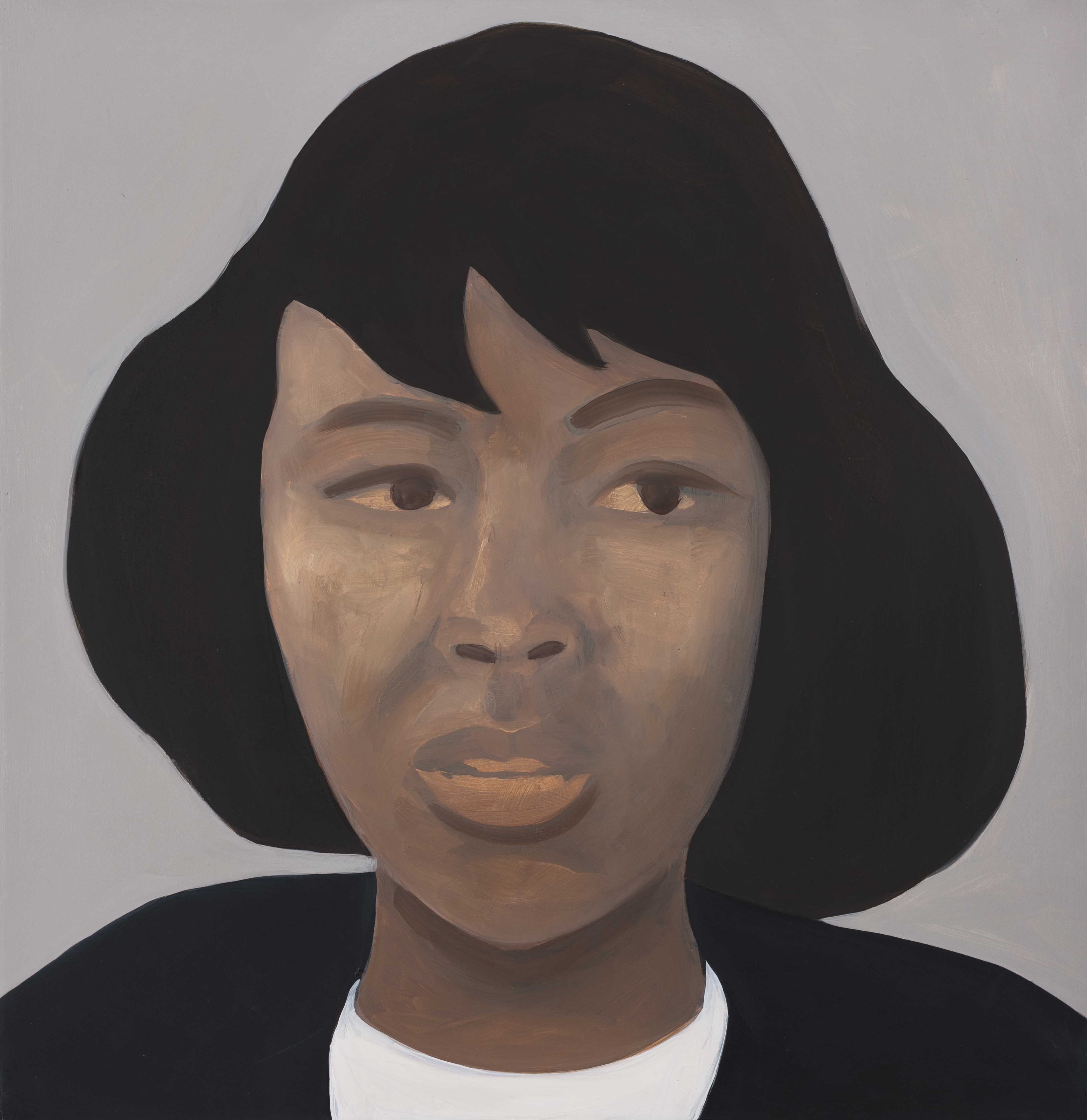 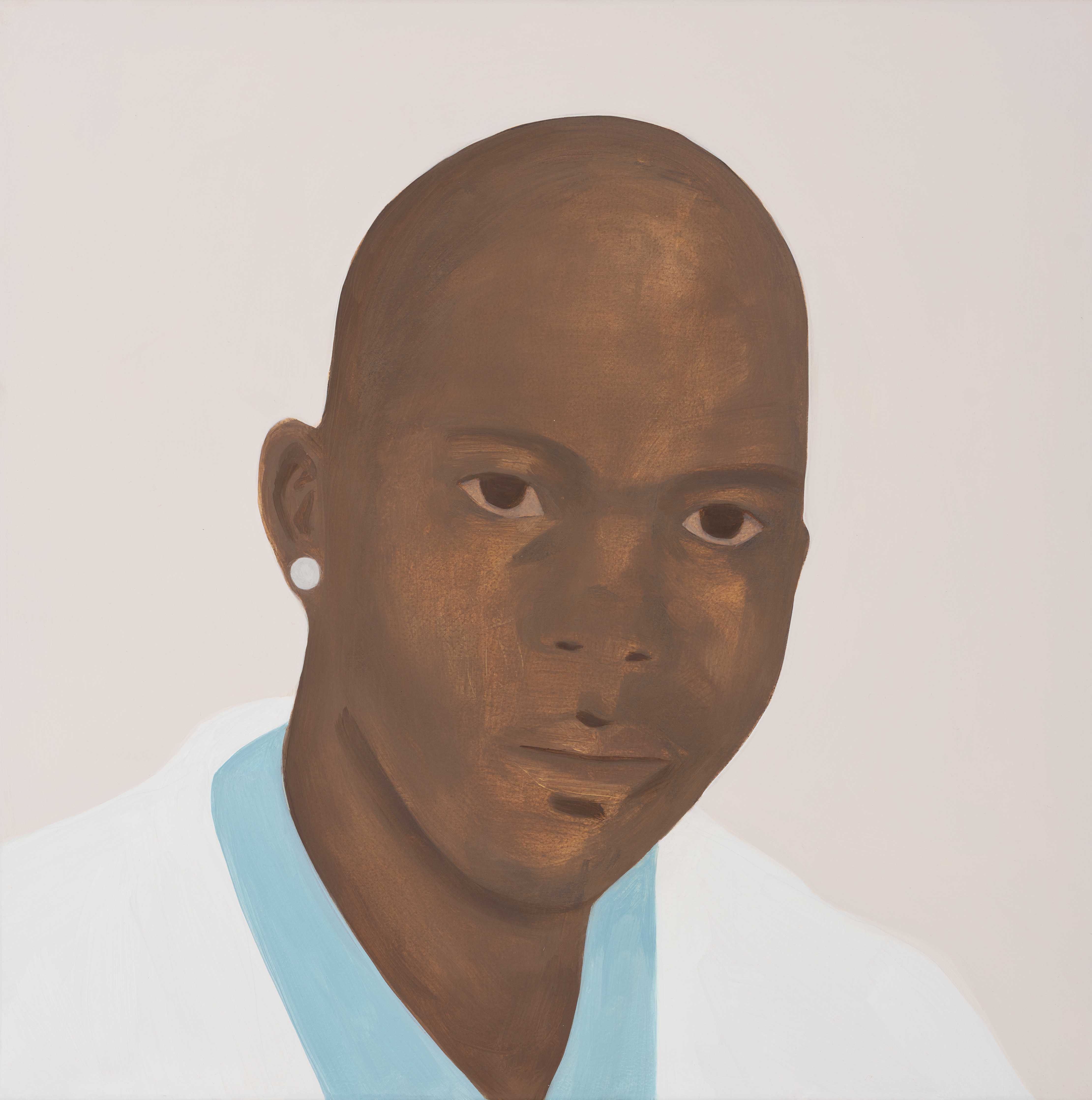 Anything interesting happening or coming up that you can share with us?
I’m working on a few things at the moment. One of them is a large-scale comic provisionally titled The Beginning of Stories. It’s a personal or historical graphic novel that I’m drawing and writing. It’s a slow-burning, longish-term project that I hope to be finished with by the end of 2018. 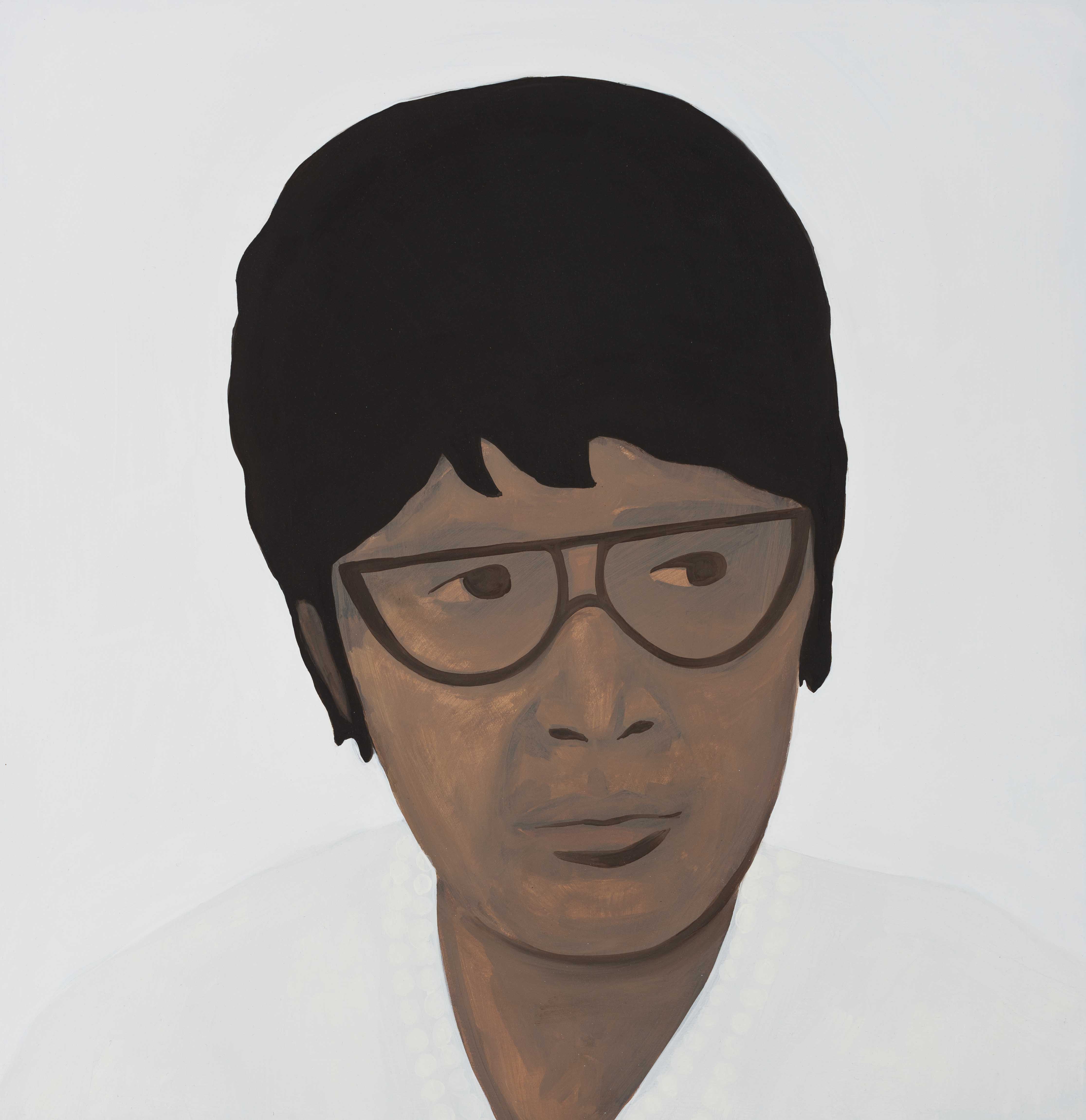 Mother (After Winnie Mandela) 2013. Oil on canvas. 50 x 50cm.
Activist, politician and former partner of Nelson Mandela. Sometimes referred to as ‘Mother of the Nation’. 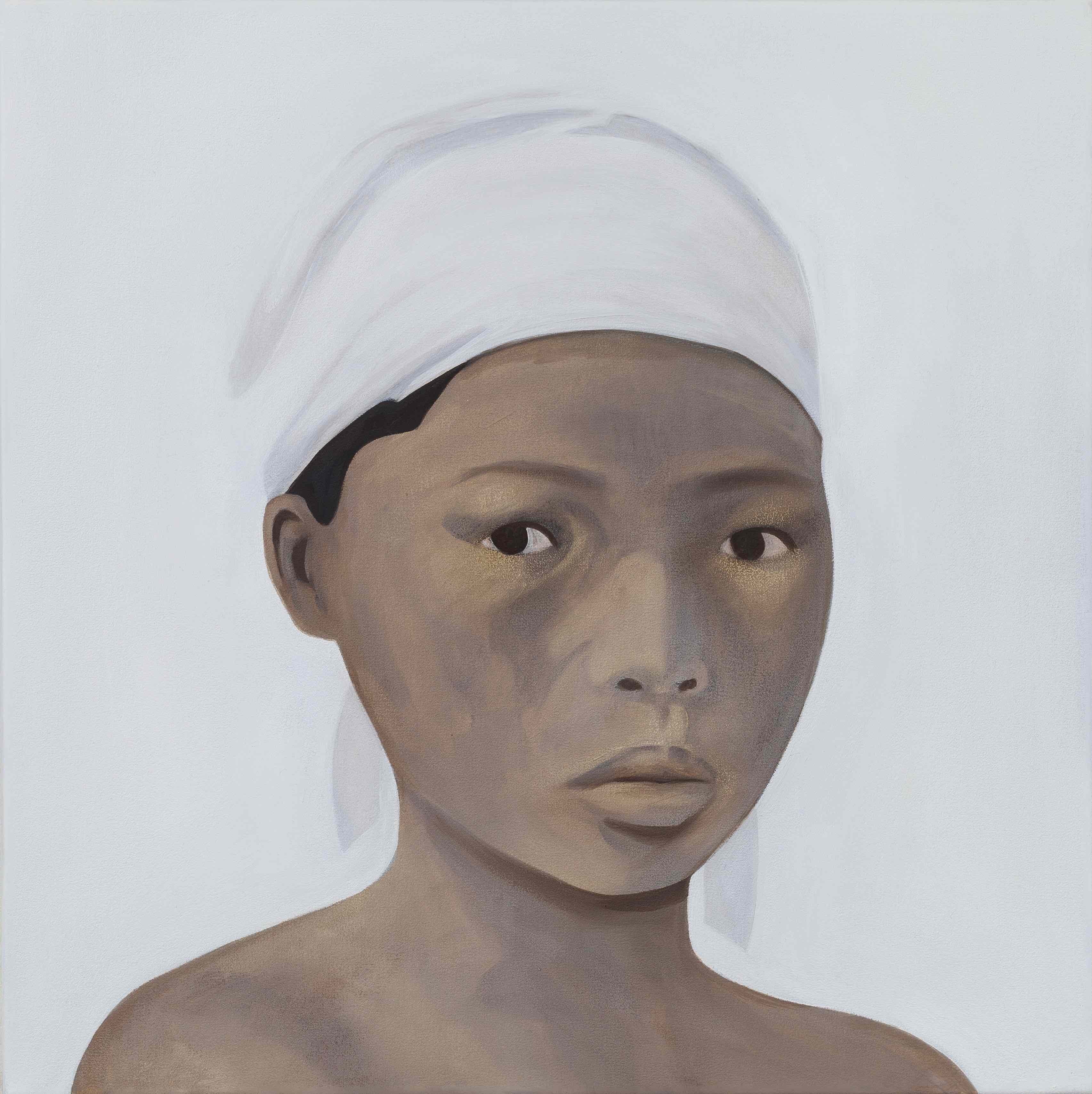 Translator (After Krotoa) 2016. Oil on canvas. 50 x 50cm.
Khoikhoi woman who worked as a translator between her people and the early Dutch settlers in South Africa. 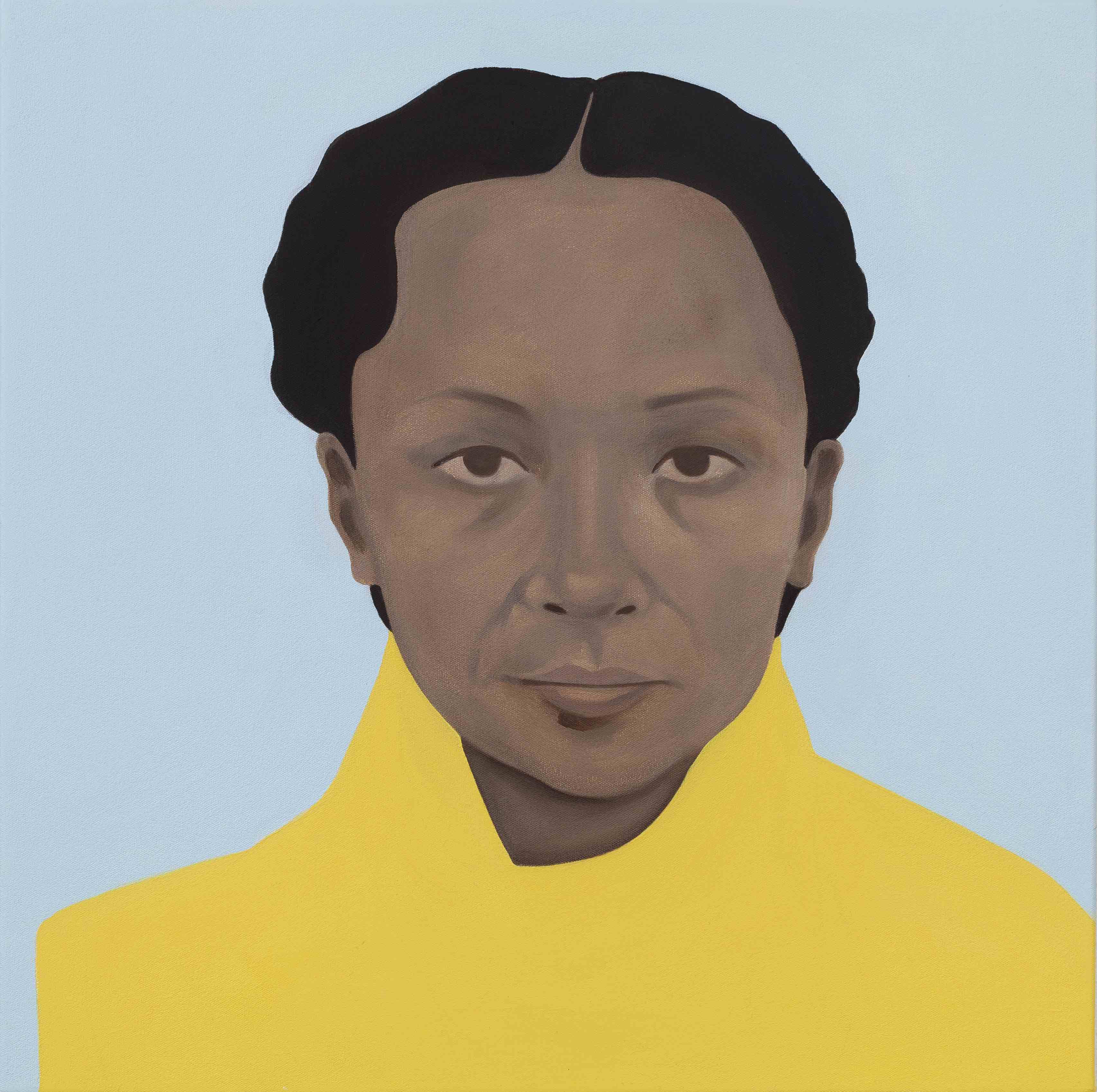 From 26 April to 28 August, Fondation Louis Vuitton in Paris presents Art/Africa, le nouvel atelier, Thenjiwe’s work is exhibited as part of Being There, an exhibition of works by South African artists that complements the primary exhibition The Insiders, which include works by African artists as well as perspectives turned towards this continent.

Works from Thenjiwe Niki Nkosi’s Heroes series have been bought into Nando’s Art Collection in Nando’s UK. This article was made possible by the Nando’s Art Initiative.