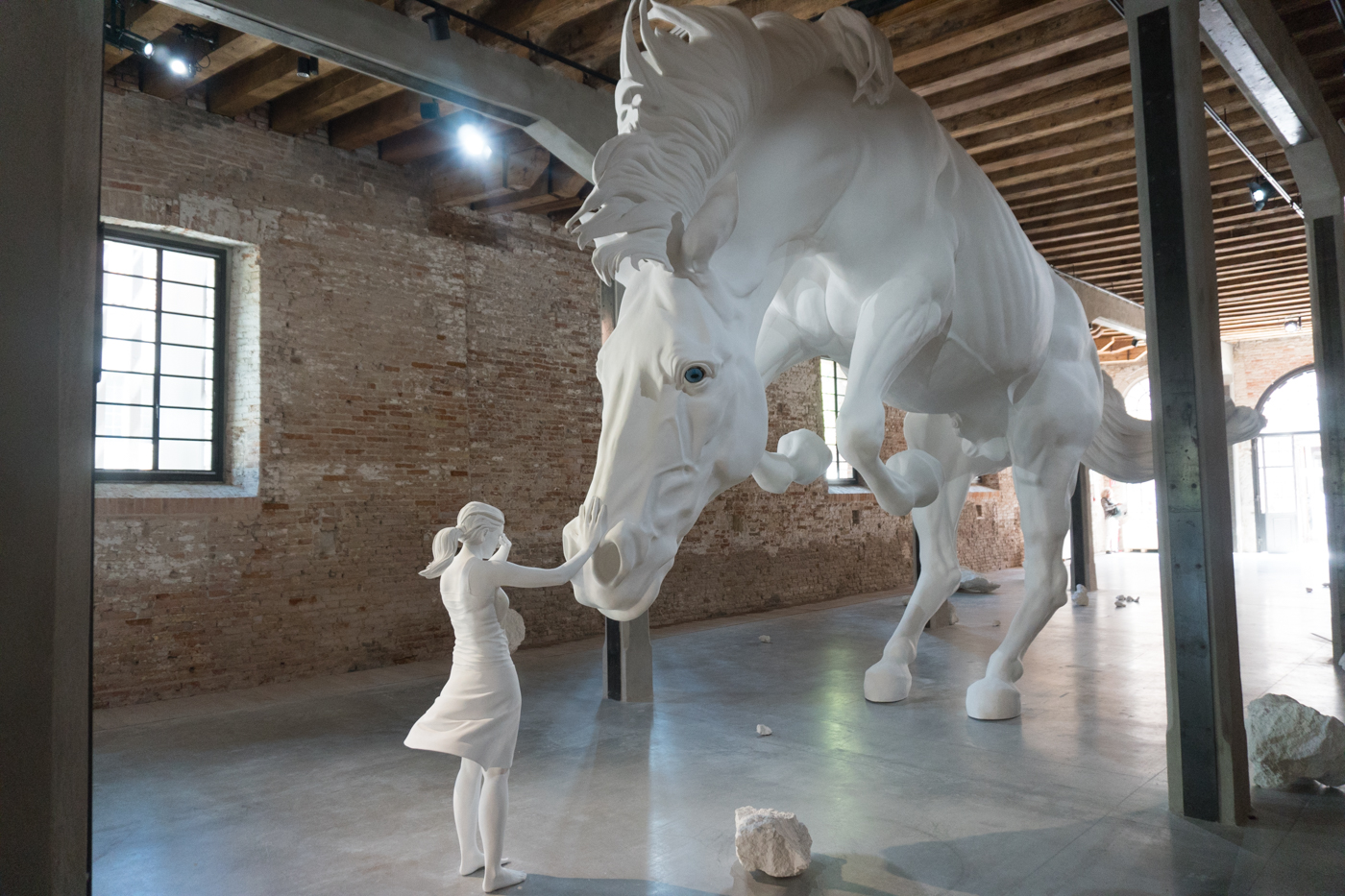 Posted at 11:36h in Art, Art Fair by oneawe
0 Likes
The Venice Biennale is an important global art event, despite the obvious problems that come with its format, for example, the relevance of the nation state, the curatorial lens and its subsequent lack of African voices, and sometimes the absurd grandeur of it all.
Numerous pavilions challenge history, colonialism and representation, while others champion the status of the global citizen and are less concerned with ideas of nationalism. At certain pavilions, it feels like there’s a chasm between the ideas of the elite, global citizen (the artist, curators and audience) and that of its nation’s citizens. One thing is for certain – the biennale provides a good perspective on global issues.
It’s a challenging task to visit each pavilion – not because of the distance needed to travel but because of the space required to reflect between ideas. With this massive caveat, we’ve put together a list of works that caught our eyes. Here you’ll find reflections and notes on female artists whose art stood out as well as pavilions and works, which piqued our interest.

This is Nigeria’s first year at the Venice Biennale. This is interesting, seeing as the curator for the biennale in 2015, Okwui Enwezor, was from Nigeria. The work is appropriately titled How About Now. Three artists were selected – Peju Alatise created a piece titled Flying Girls, Victor Ehikhamenor exhibits his massive painted canvas with mirrors and sculptures from the Benin City market, and Qudus Onikeku’s performance piece is visible in the third room. 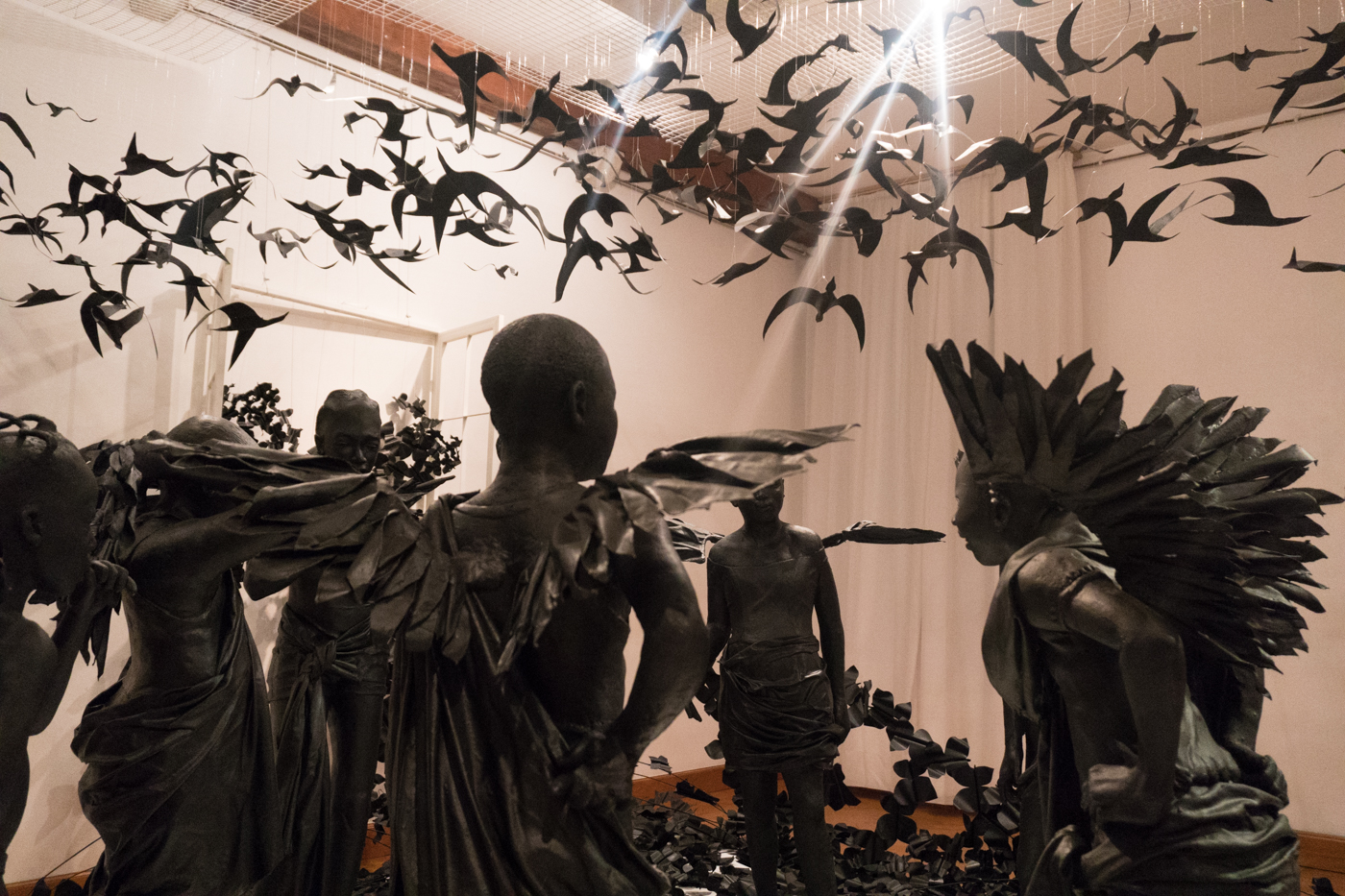 Alatise’s work deals with the crises of disappearing girls in Nigeria – larger than life sculptures of eight girls dancing in a circle have sprung wings while a flock of birds hover above them. It is technically beautiful and powerful at the same time. 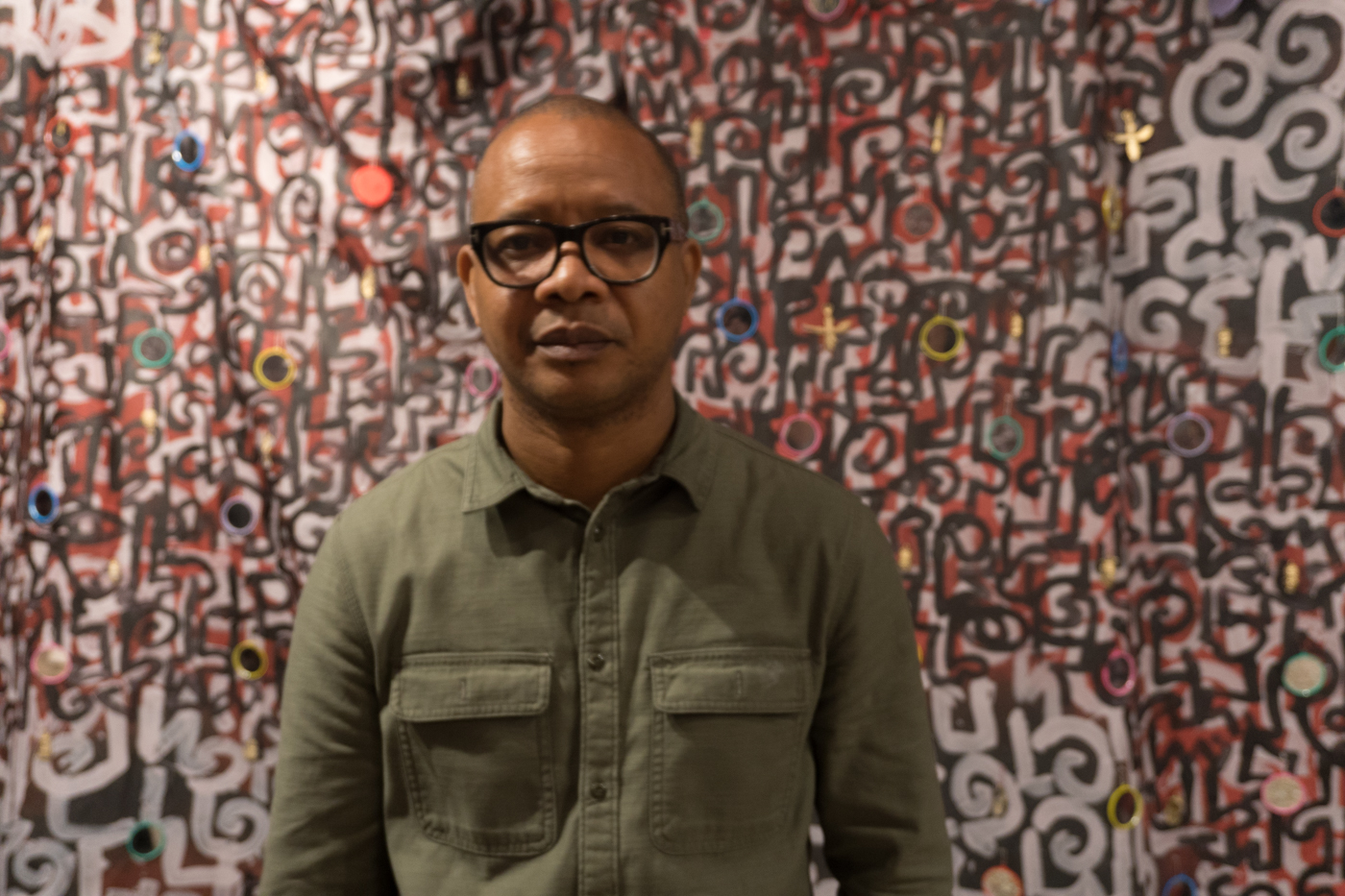 Ehikhamenor’s work stretches from ceiling to floor, and is around 20m in length. From the painted works, hang pieces of bronze sculpture that were sourced from the local Benin market. In an interview with Ehikhamenor, he said it’s important for Nigeria to claim its history from a colonial past and create new narratives that Nigerians own.

Qudus starts his performance by placing Nigerian newspaper on the floor. As it progresses, the audience is encouraged to read headlines out loud, tear up the newspapers and toss them in the middle. This is set to an enchanting rhythm while Onikeku dances in the middle of the crowd. 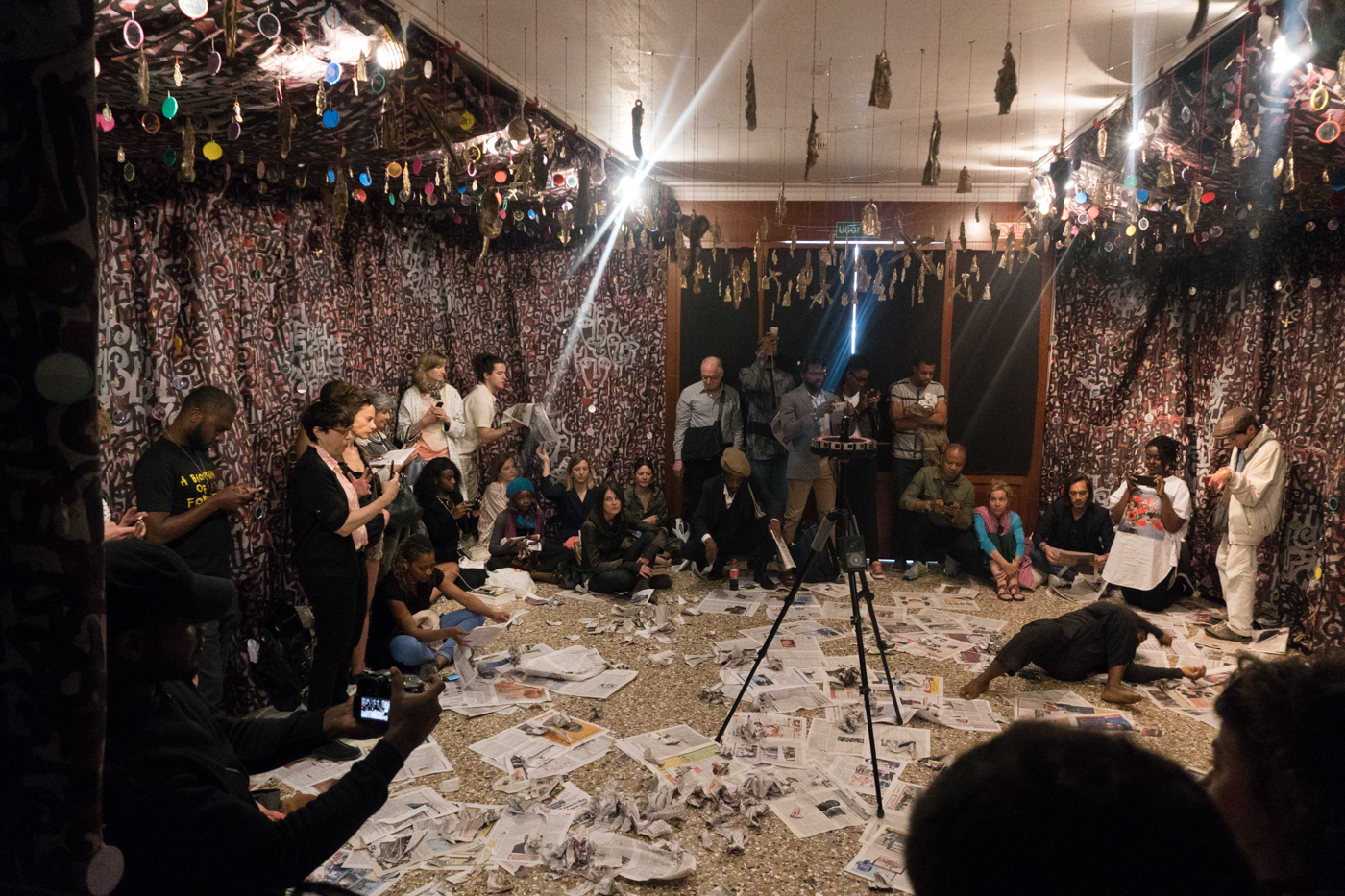 Located in the Giardini, the Korean pavilion stands out like a disco in the desert and would not be amiss at Afrikaburn. The outside facade of the building has a gigantic casino arcade with neon lights enticing visitors to 24/7 orgasms, all-night parties and more. Created by Cody Choi and called Venetian Rhapsody, the facade flips the consumerist nature of American culture in Korea back on itself, and re-commodifies it while commenting on consumerist culture. 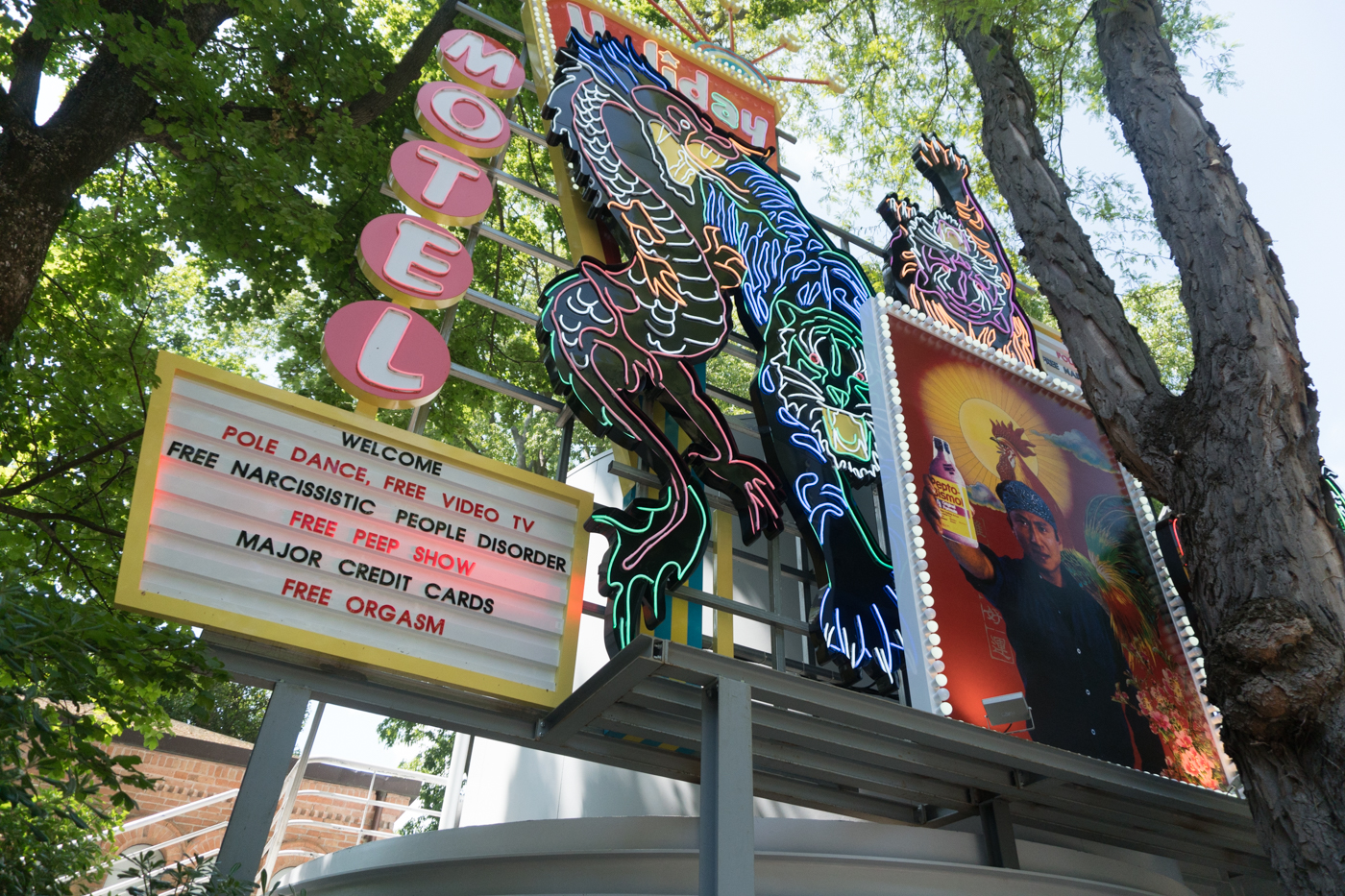 The second artist, Lee Wan, created a series of works with various clocks running at different speeds. He spent time interviewing hundreds of people to determine how long they have to work to make enough money for breakfast. Each clock runs according to that person’s hourly wage. 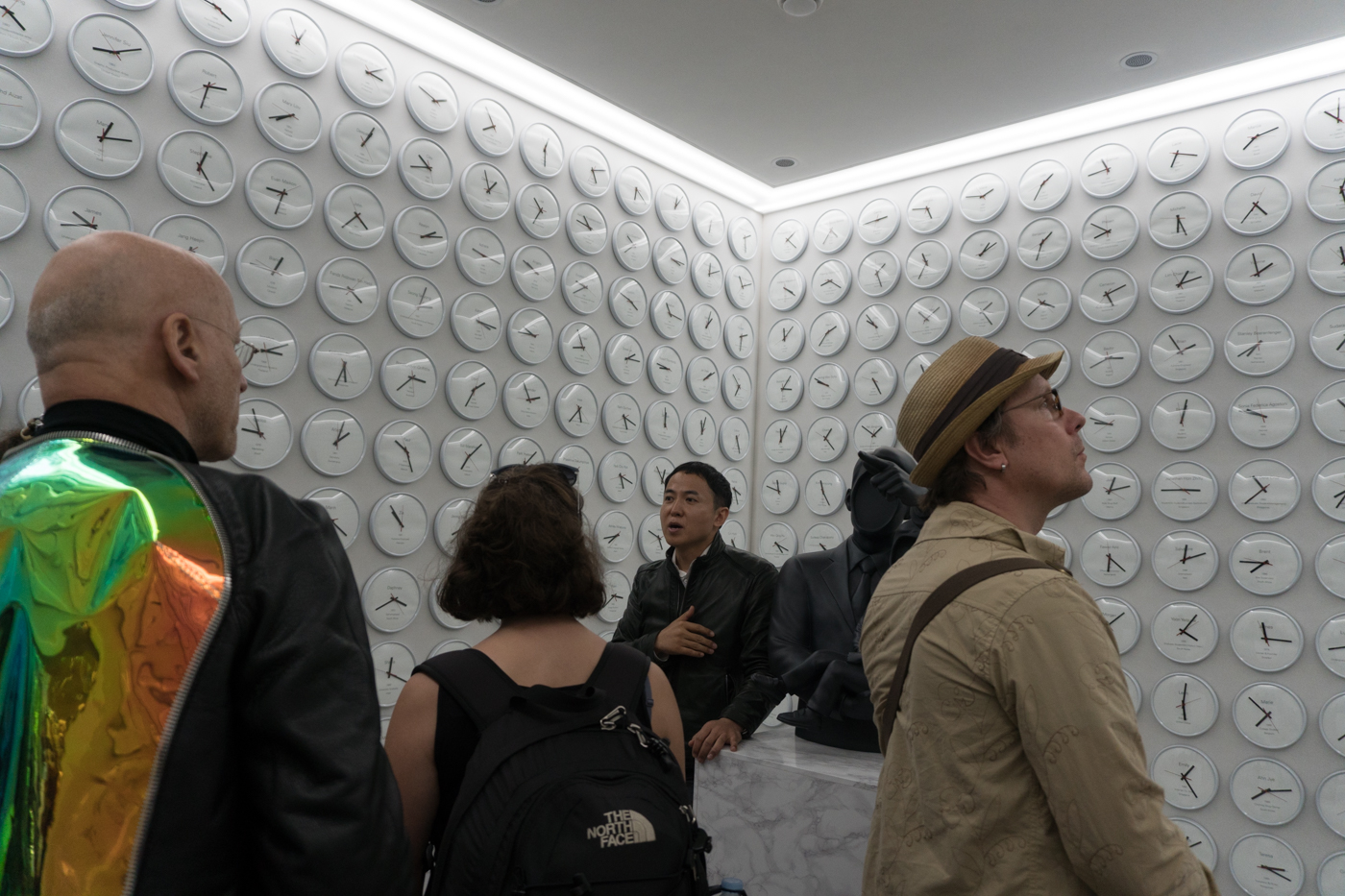 We have to admit; we gatecrashed the New Zealand opening party for a short while – thanks for the Spritzes! Located at the end of the Arsenale, the pavilion takes the form of a moving video installation about 20 to 30cm, titled In Pursuit of Venus by artist Lisa Reihana. It plays out various scenes that evoke New Zealand’s colonial history and the controversial British “explorer”, Captain James Cook, and more. 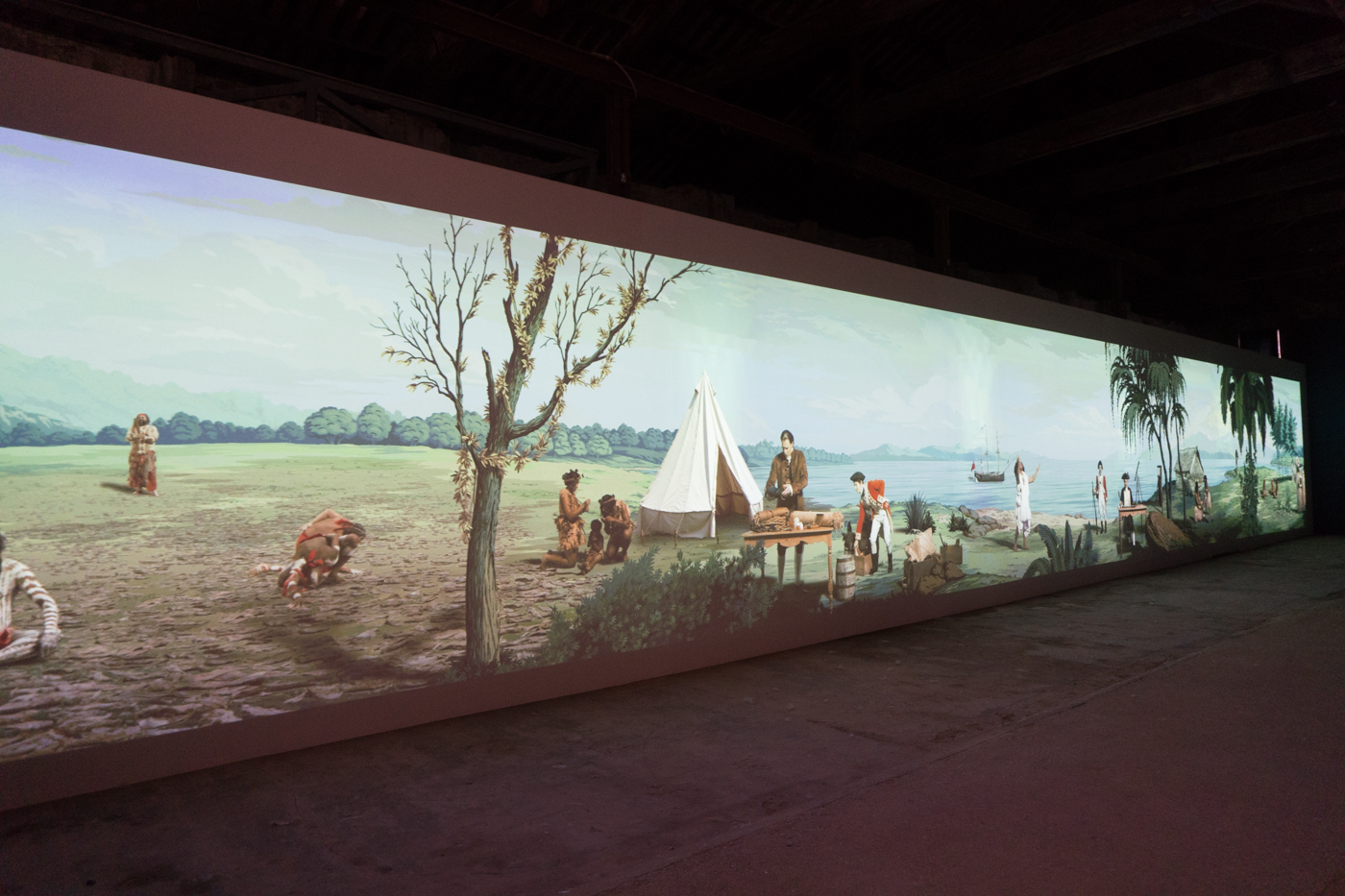 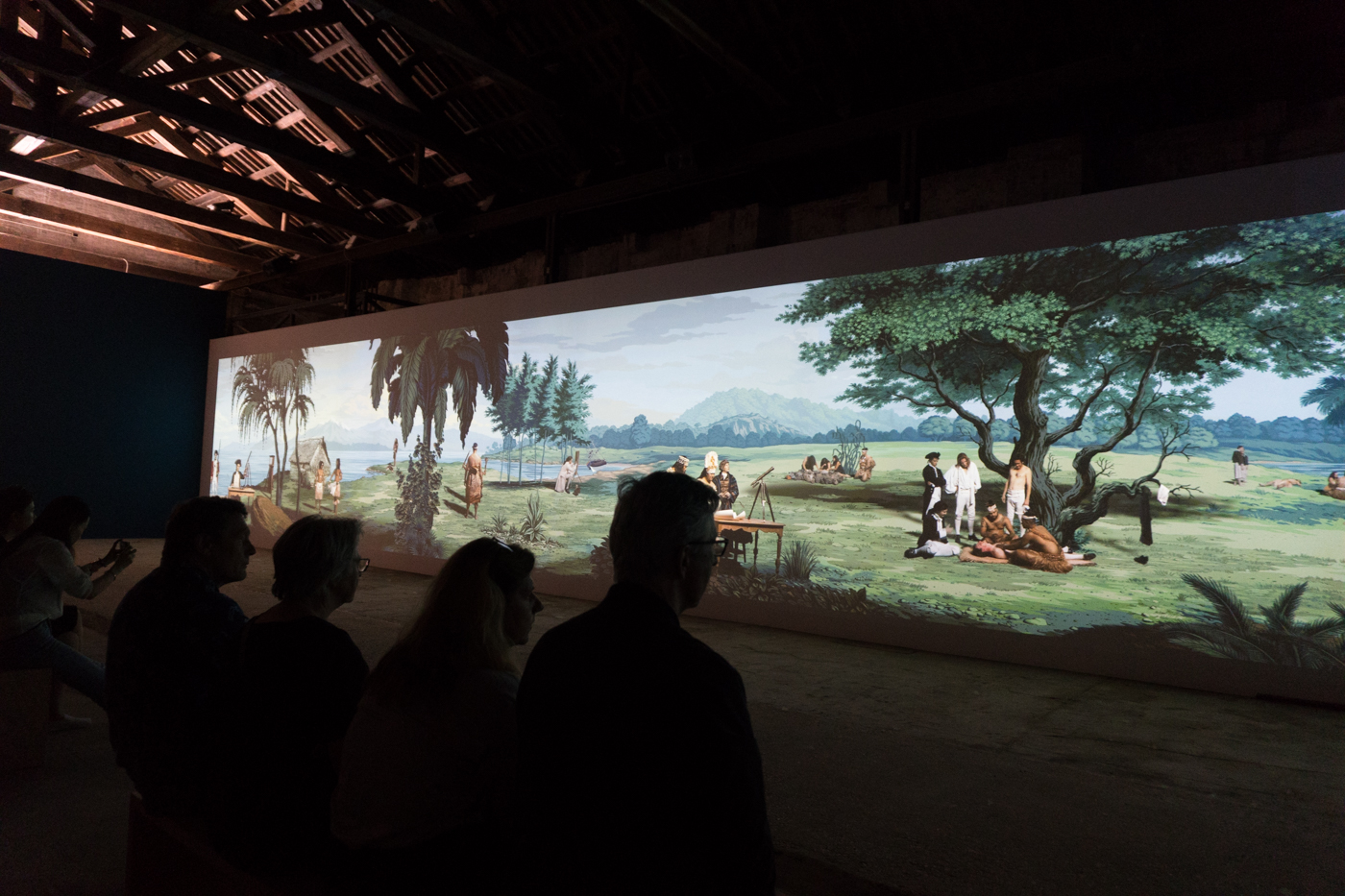 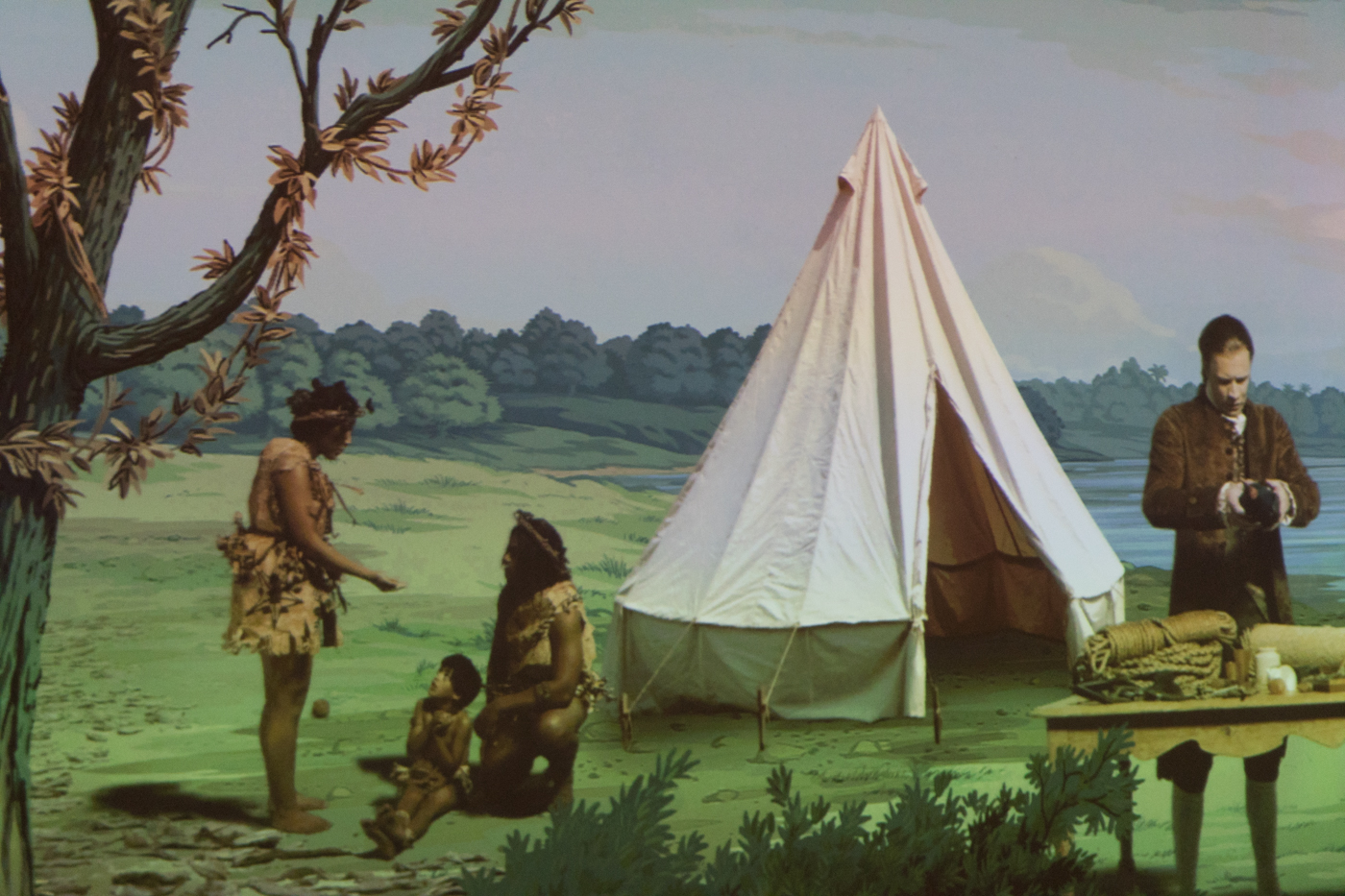 Wooden houses and building constructions are mirrored and hung in the space. In the middle, visitors peer up through the floor. All are surprised when they realised they’re part of the exhibition. 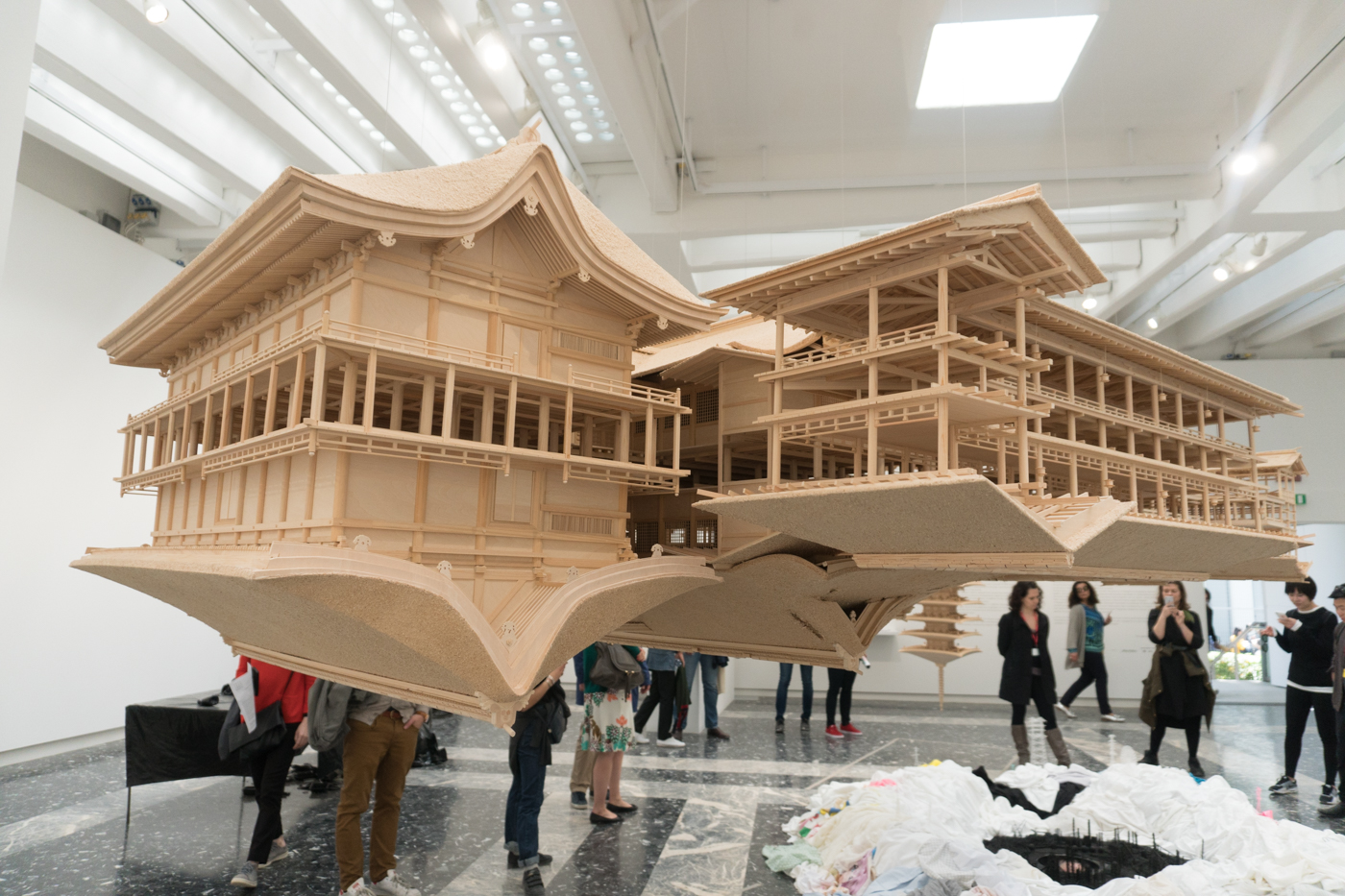 As we stepped into the Azerbaijan pavilion, we entered a floor-to-ceiling projection of identities from various histories and cultures speaking to the duplicity of identity in the country. Upstairs, two massive installations of string instruments fill up two rooms. 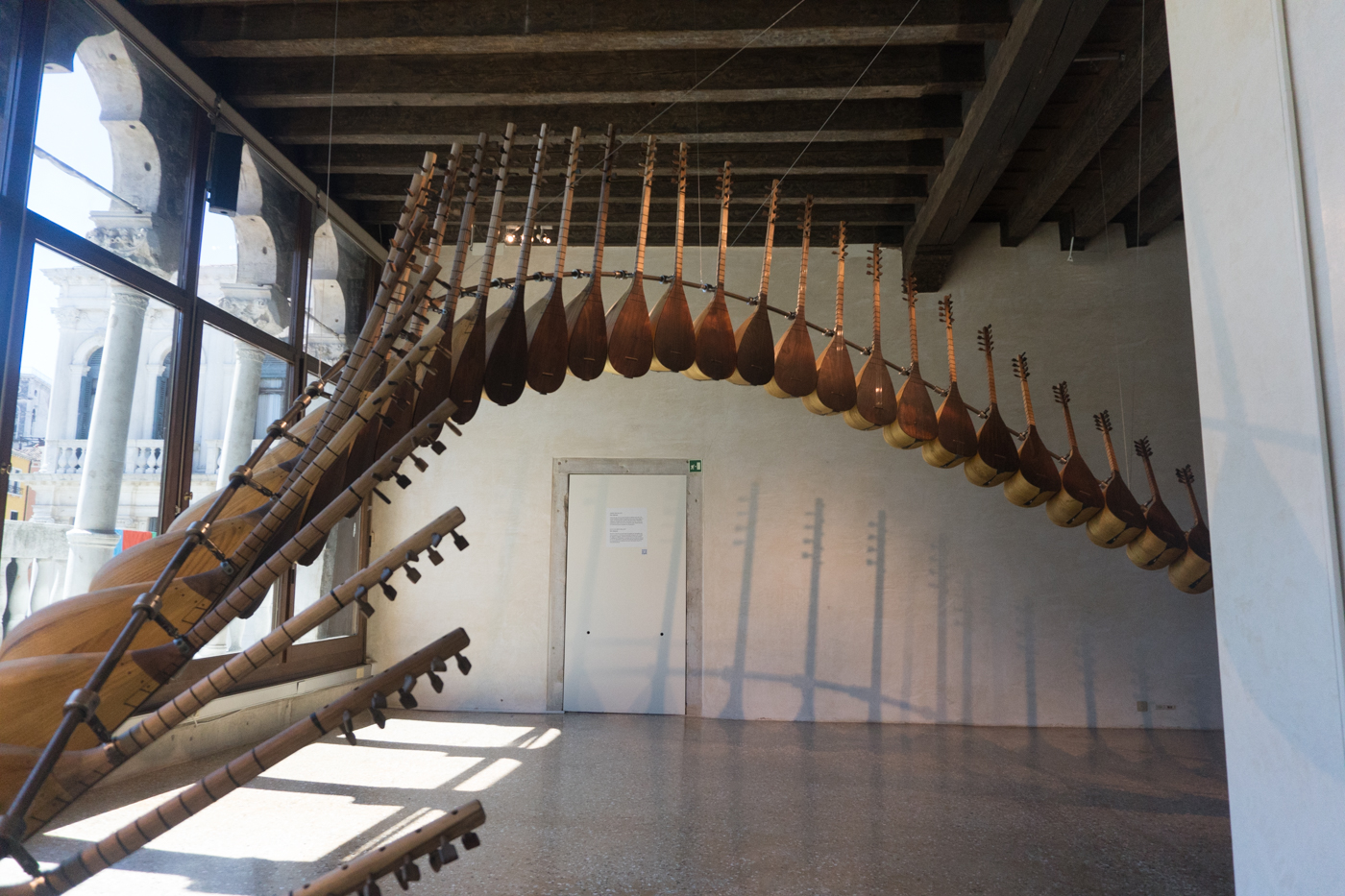 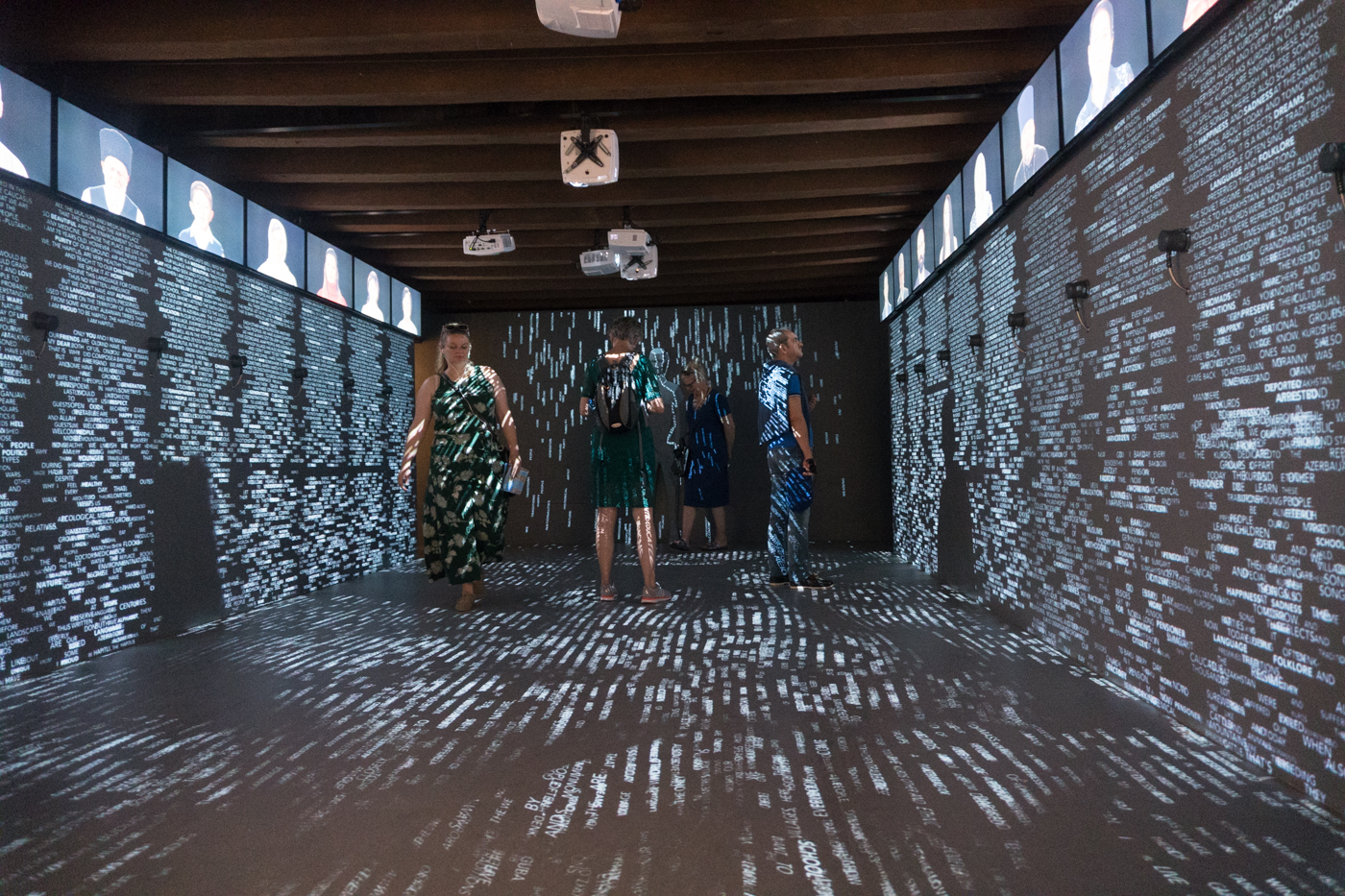 This is a small fringe pavilion located in Dorsoduro in the university grounds and hosted by Zuecca projects. The project deals with water rights, access and the future of water. At the one corner of the garden, massive pillars were exhumed from the foundations on which Venice was built. These pillars are replaced every so often as they decay, but some have also fossilised due to the salty water. 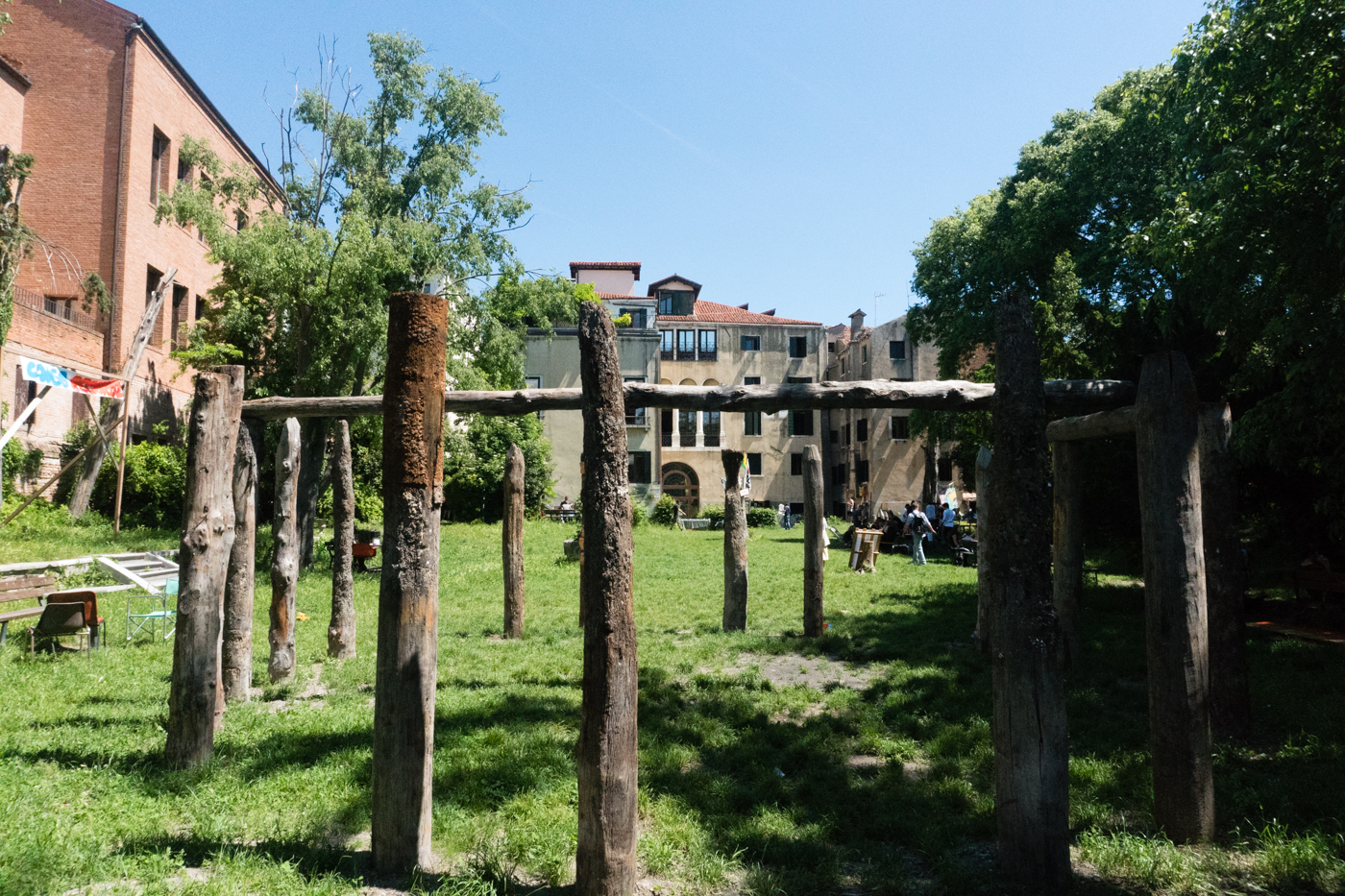 The work of Tracy Moffatt – who, according to the Guardian, is the first indigenous Australian artist to represent her country at the Venice Biennale since 1997 – is a powerful contribution to the conversation that Australia still has to address about their colonial history and the current status of people of colour in the country. 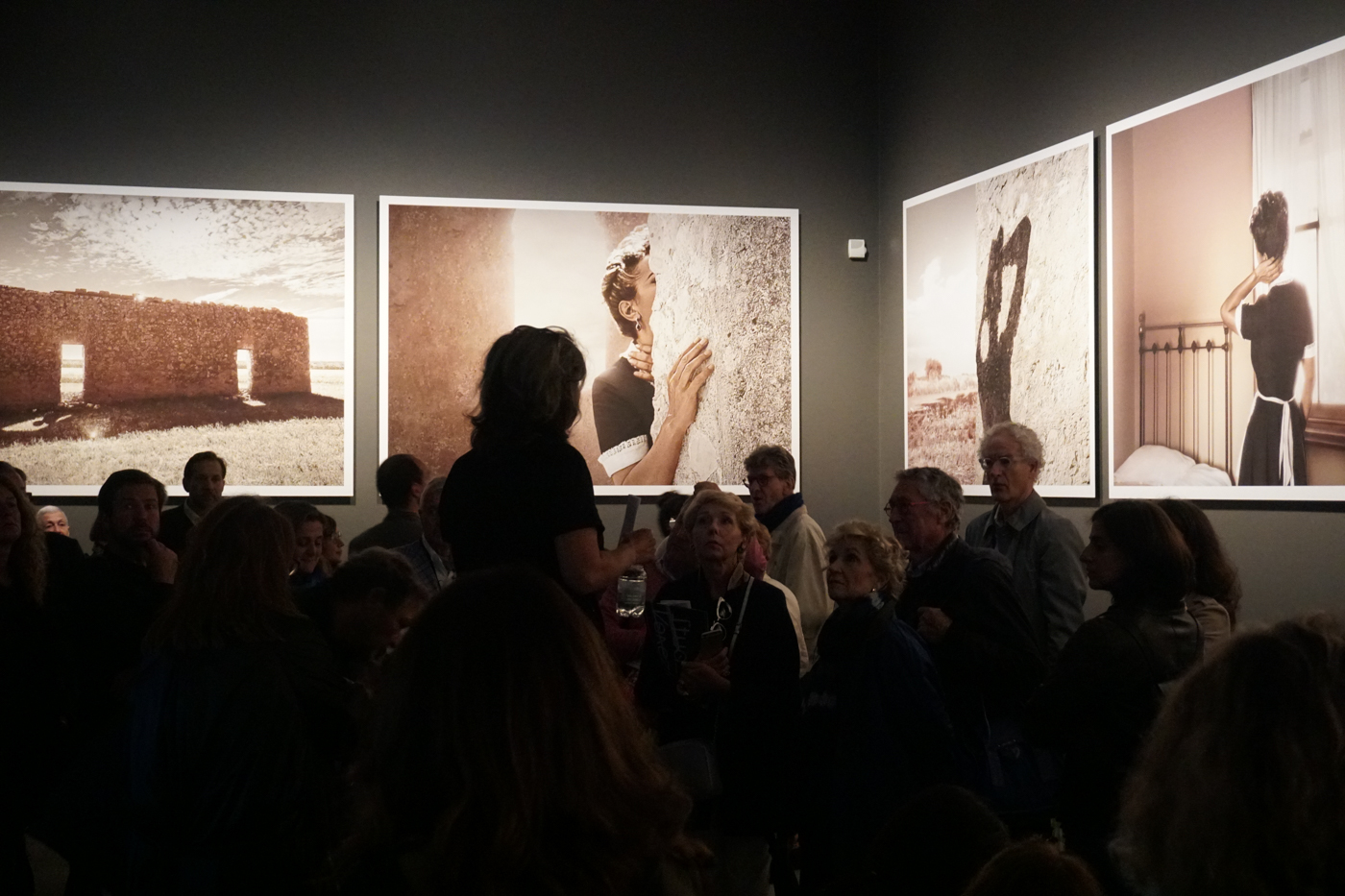 We loved the idea and execution of the Green Light Project in the Giardini central pavilion. Studio Olafur Eliasson created a series of lamps that were constructed at the biennale by visitors and refugees. This nurtured a natural dialogue between people. The works will be sold to benefit NGOs. 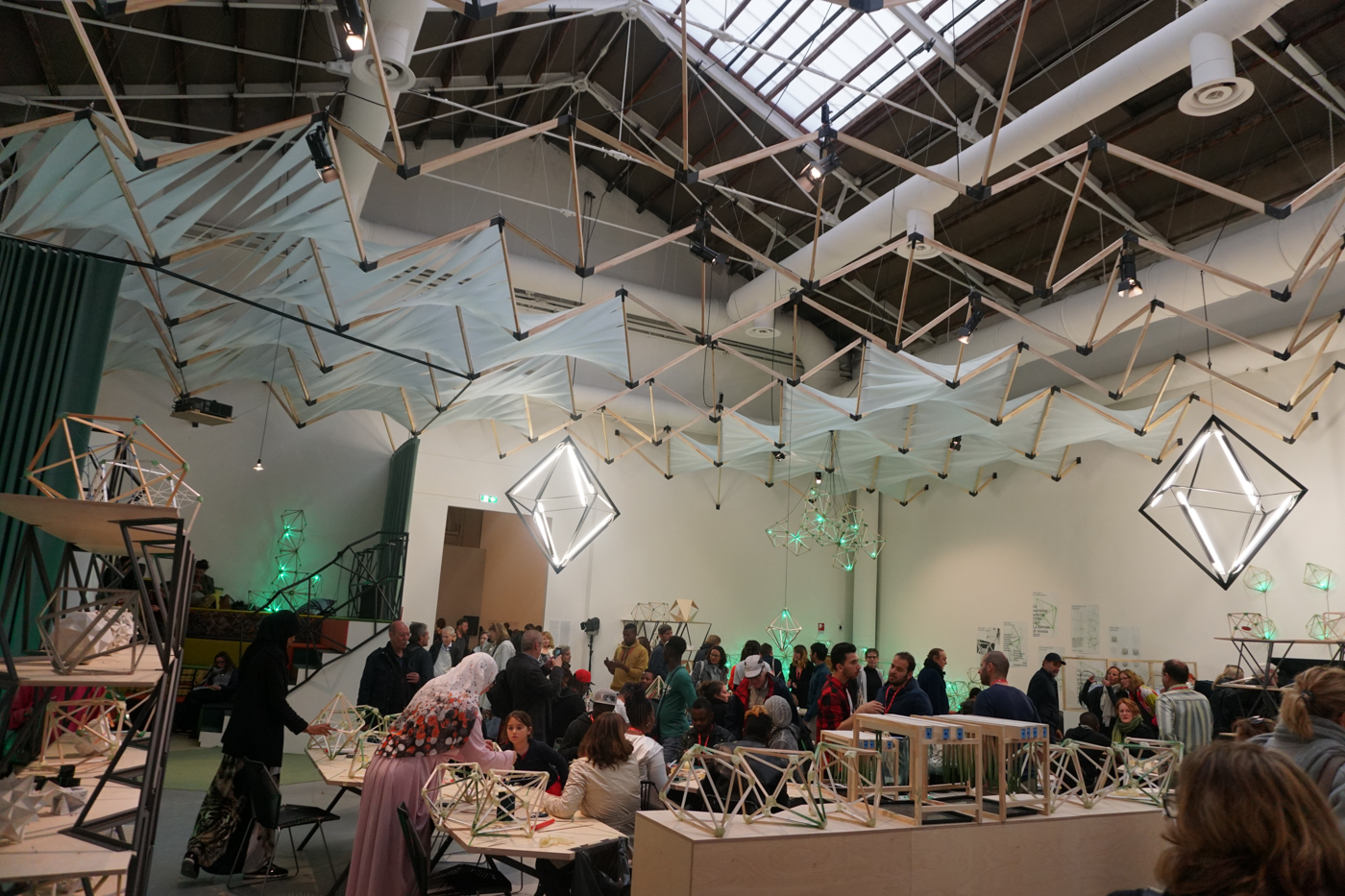 Massive bio-dome tents with fluorescent lighting cover bodies that look like figures of Christ the Redeemer. Roberto Cuoghi re-created a large scale, mass produced crucifixion factory. The last installation took our breath away. We walked through a dark, low labyrinth of scaffolding and up a flight of scaffolding steps. When we turned around, we were greeted by the view of an upside-down warehouse roof. At first, it’s difficult to make out how this would be possible but on closer inspection, it’s apparent that what you are seeing is a picture-perfect reflection of the roof in water. 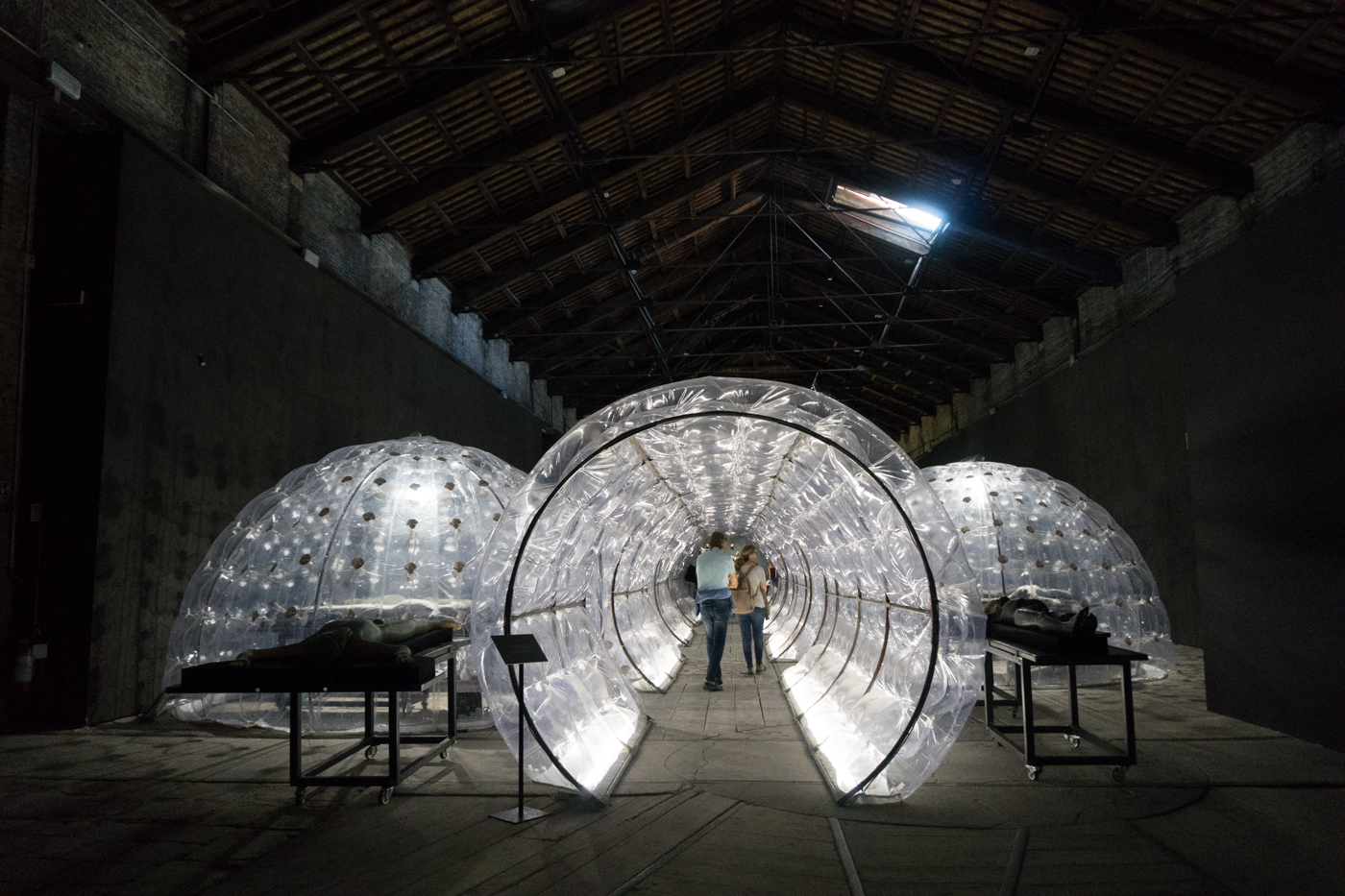 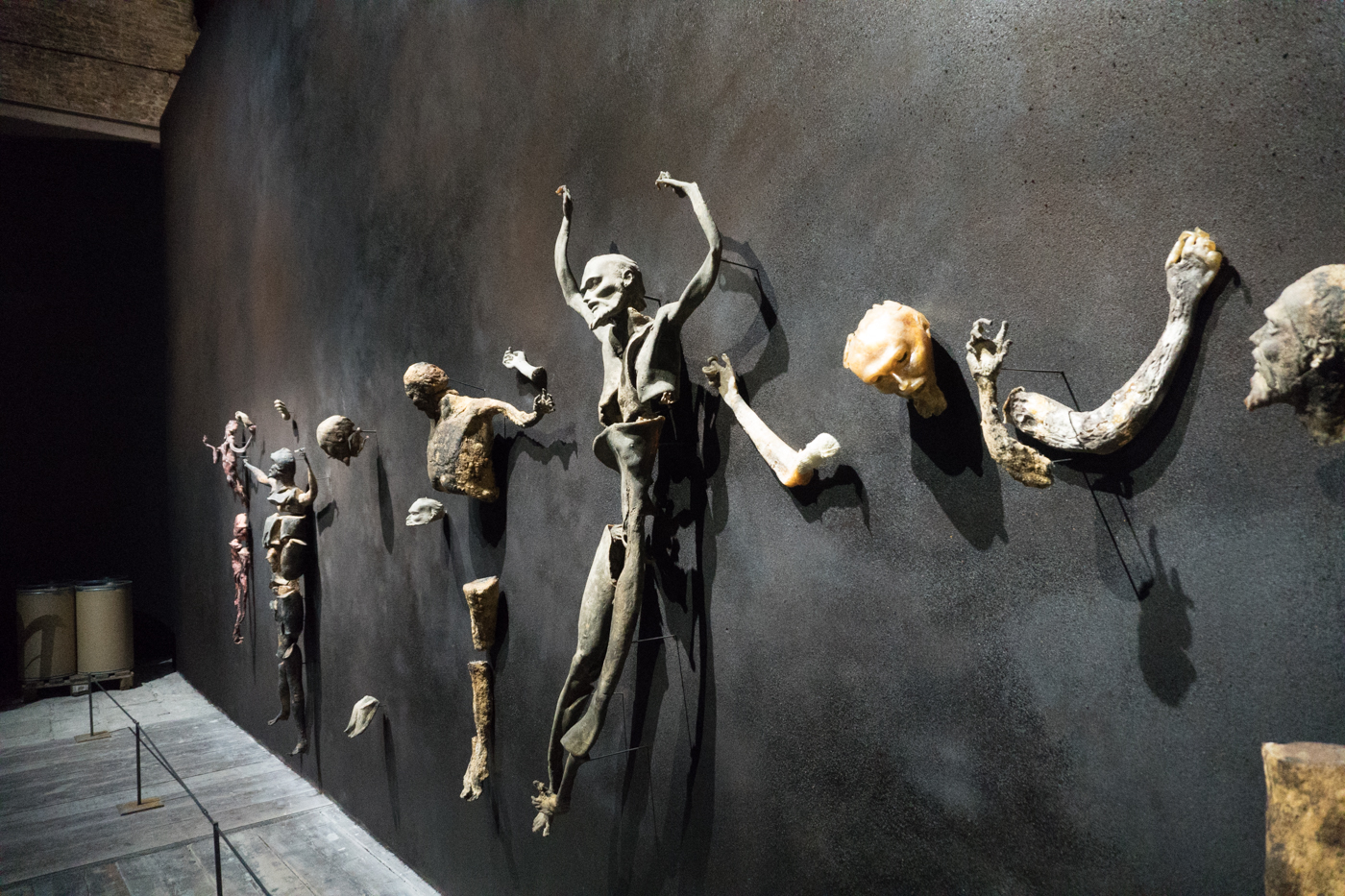 The actual exhibition inside the Austrian pavilion isn’t that impressive. It’s more the large delivery truck perched on its nose that catches all the Instagram action. We’ve seen similar trucks at Banksy’s Dismaland but with this piece, you can walk up to the top of the vehicle and peer down. 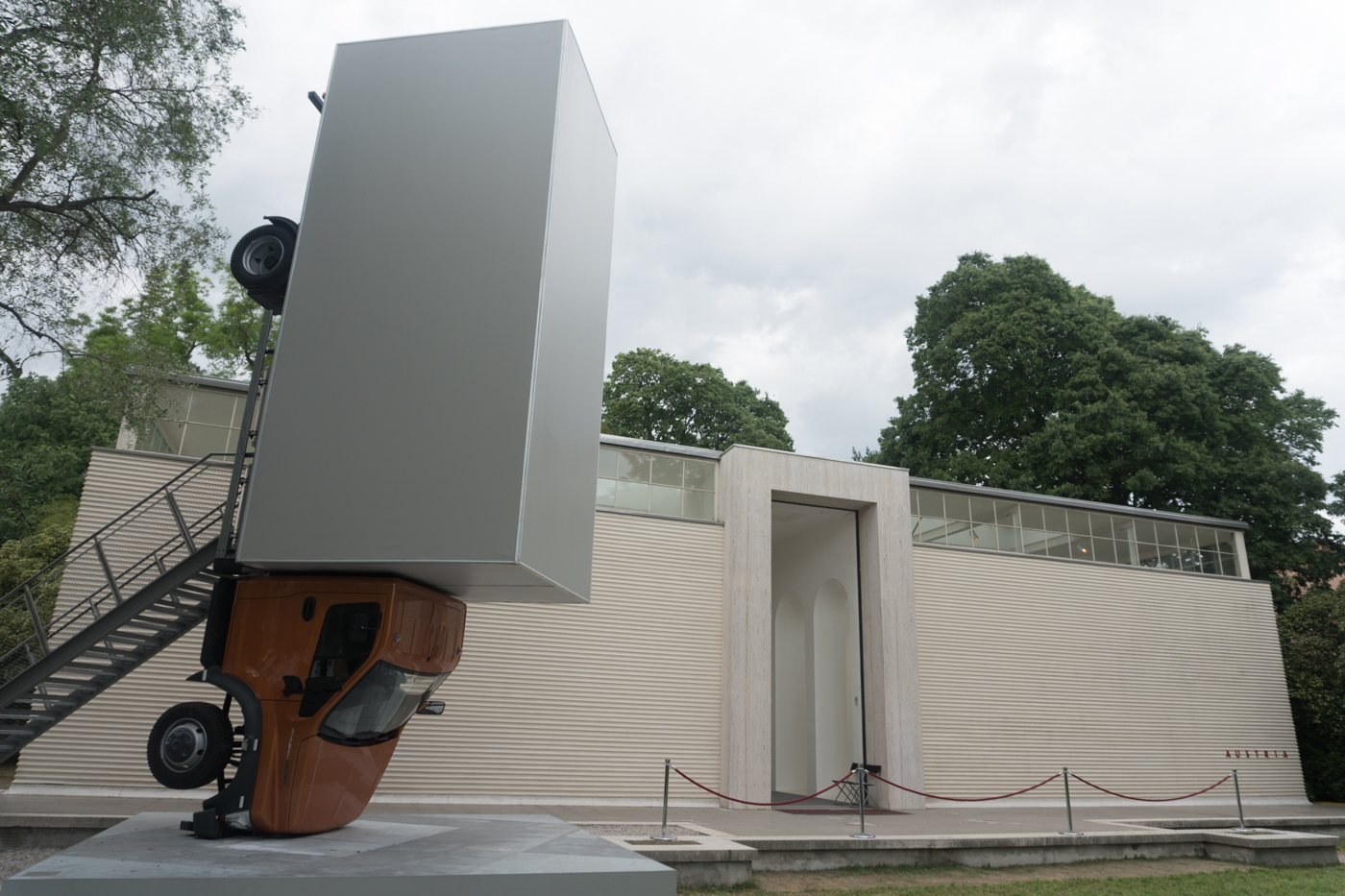 Visual artist Eve Ariza made an enormous installation of pottery bowls that reflect various skin tones. The pieces are fixed to the wall, creating a gradient of skin tones from light to dark across the entire room 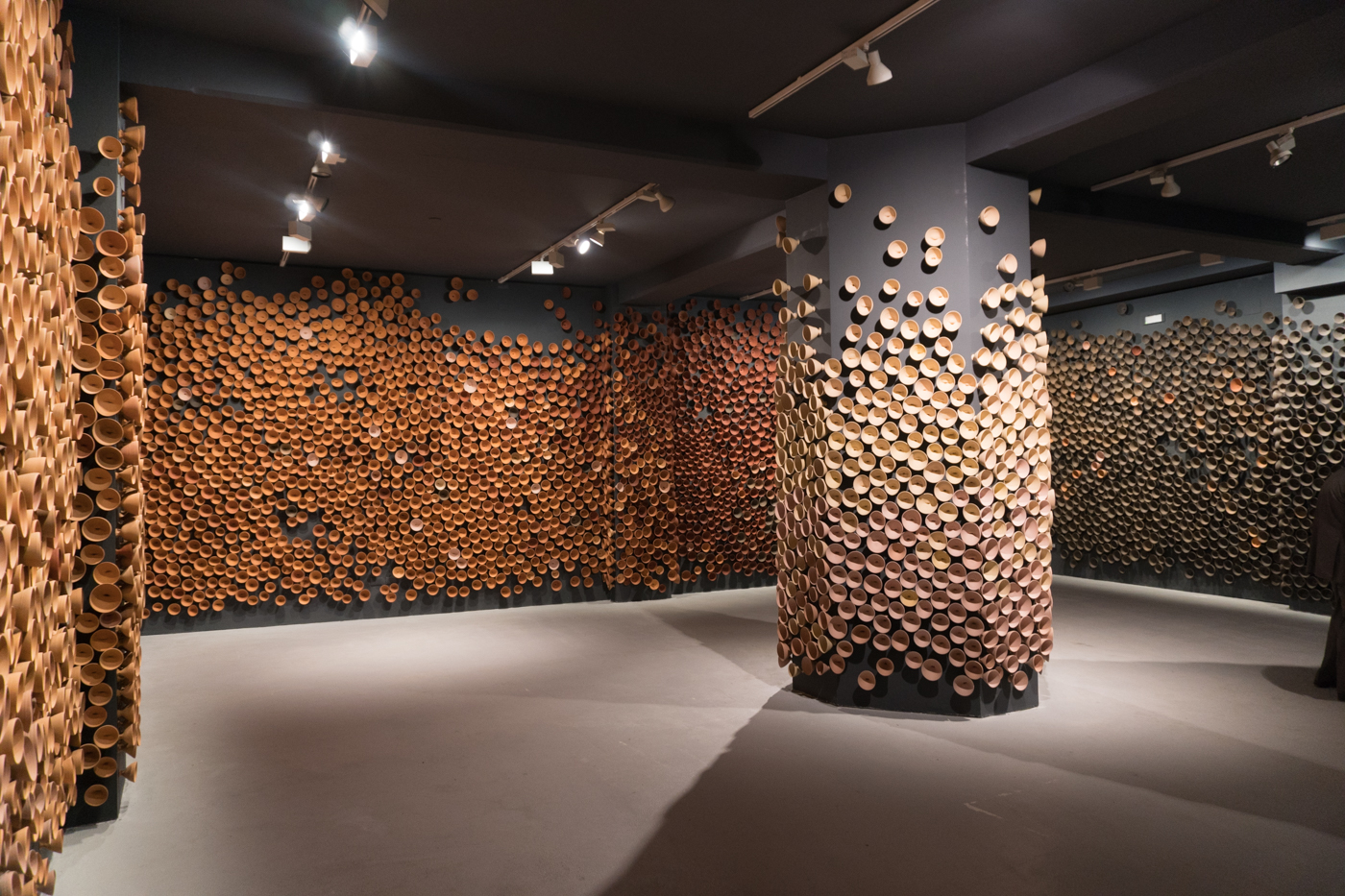 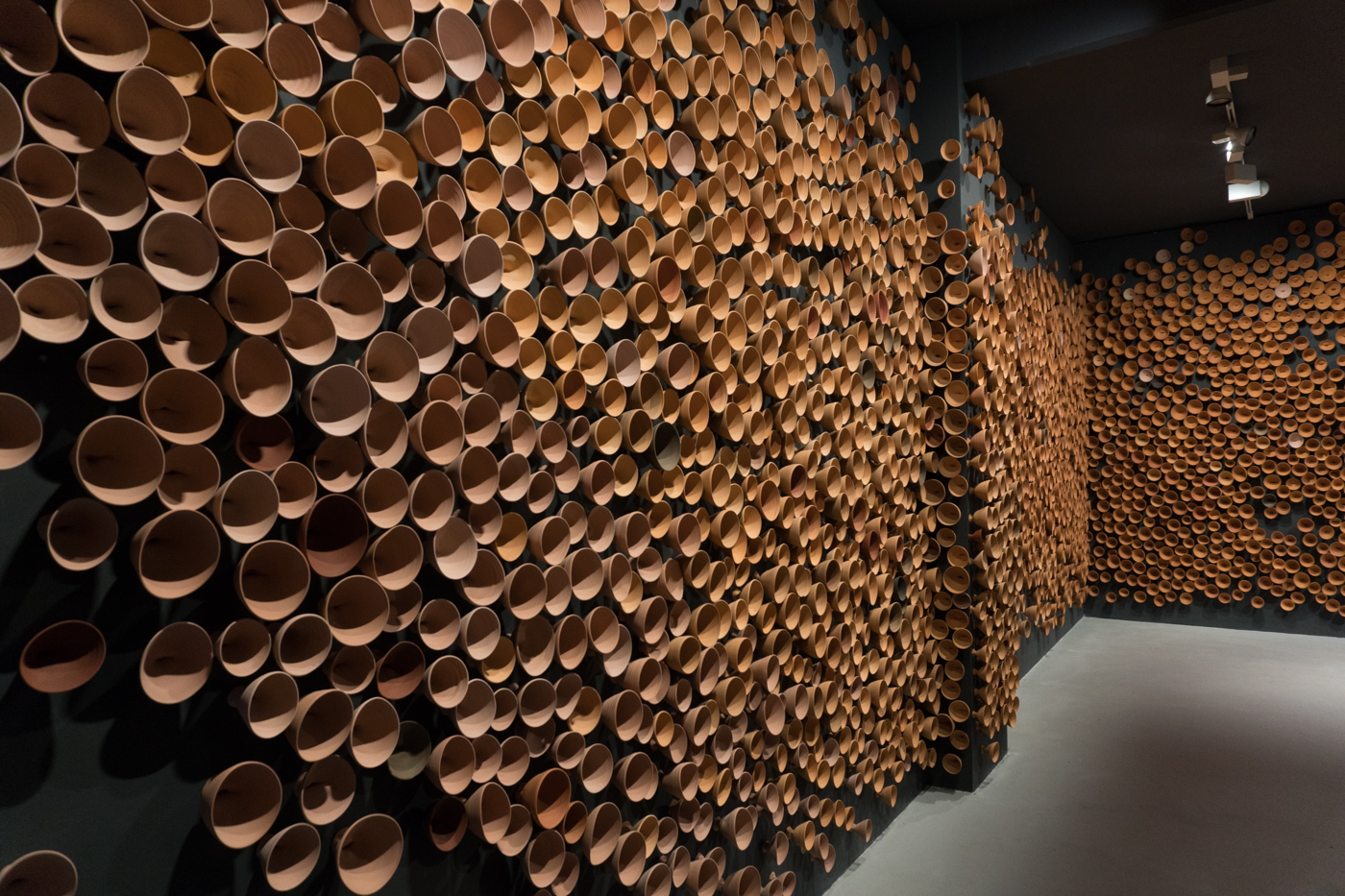 Vahjiko Chachkhiani constructed a small “abandoned” wooden house with a constant downpour of rain inside. Over the course of the biennale, the pavilion will decay with rot but remain solid on the outside. 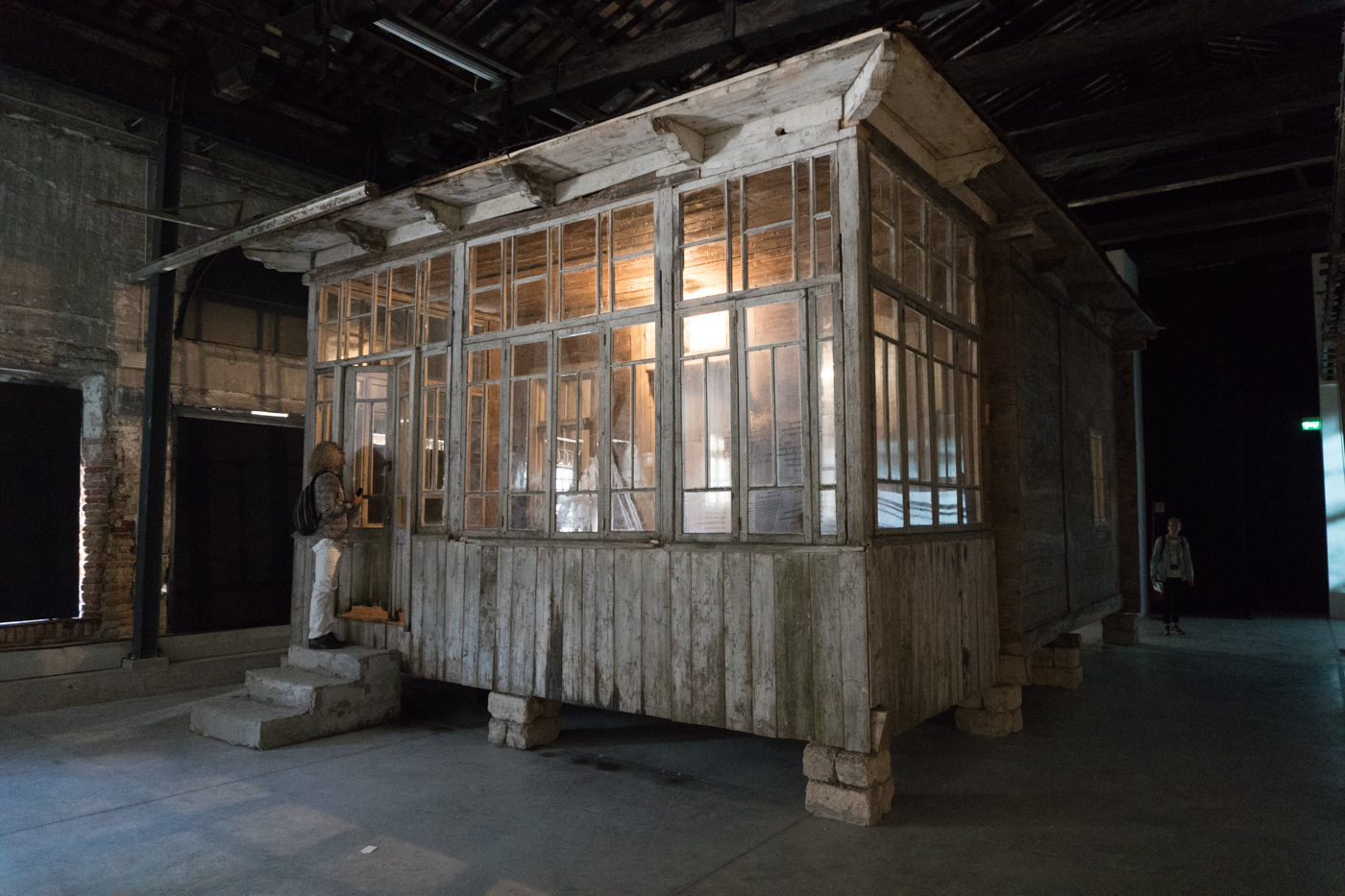 Lastly, the South African Pavilion is made up of two artists – Mohau Modisakeng and Candice Breitz – and takes you through three rooms. Both artists have hard-hitting video installations dealing with identity, nationhood and, in work from Breitz, our infatuation with celebrities.
By Modisakeng, three figures are placed in slowly sinking boats that eventually take the form of coffins. Titled Passage, it represents a migratory journey and the various forms of migrant and slave labour employed in the Cape Colony. 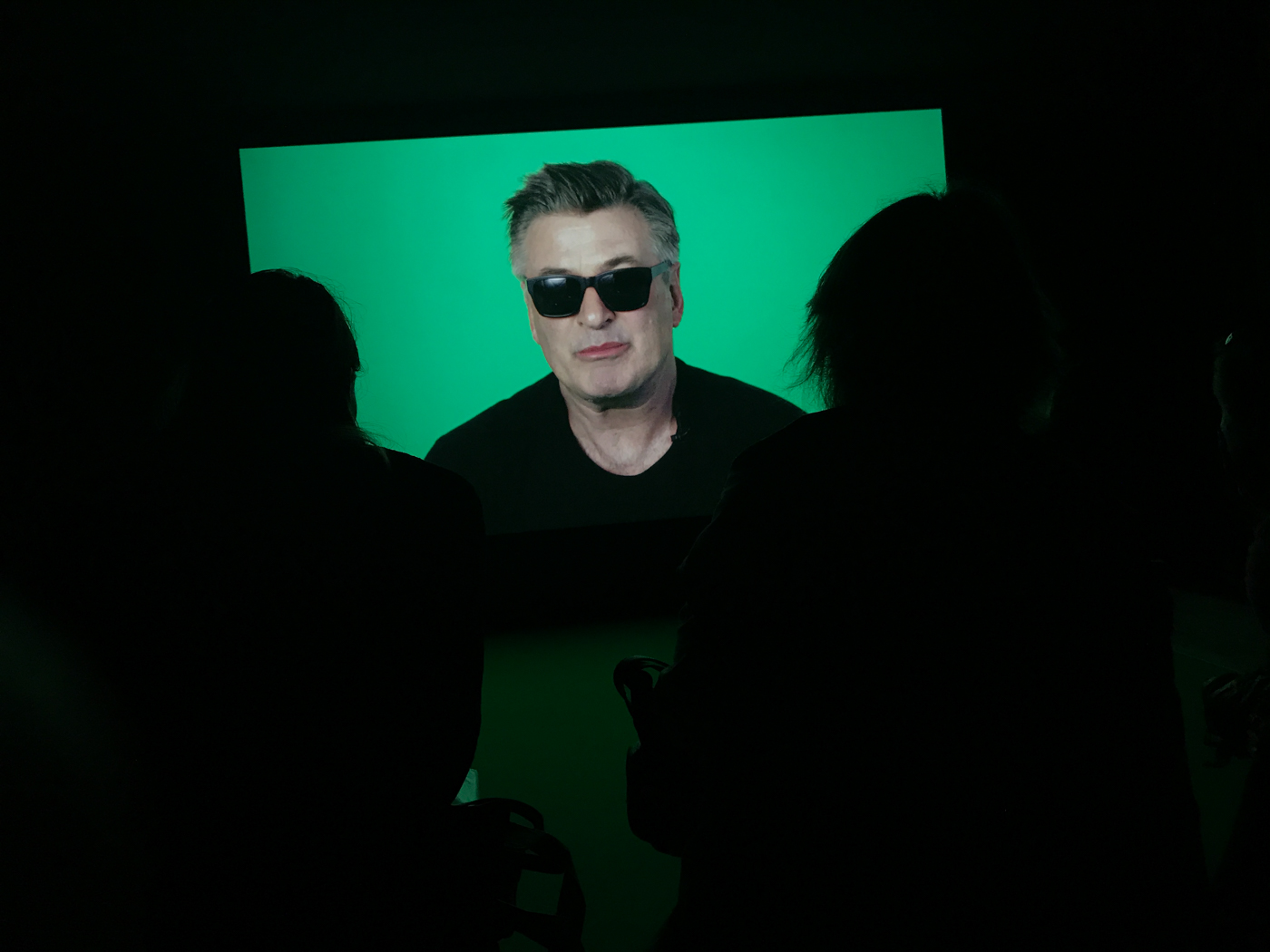 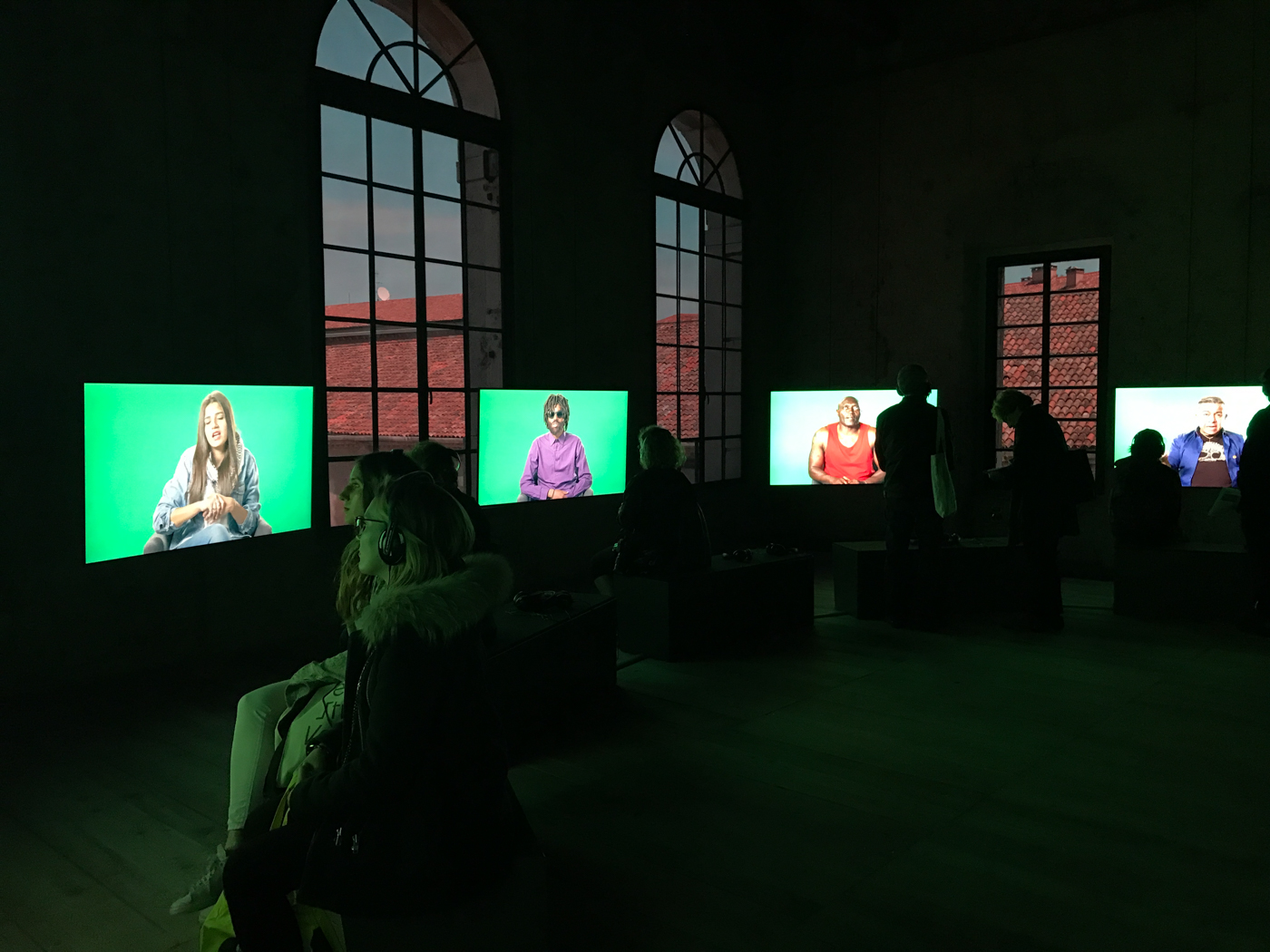 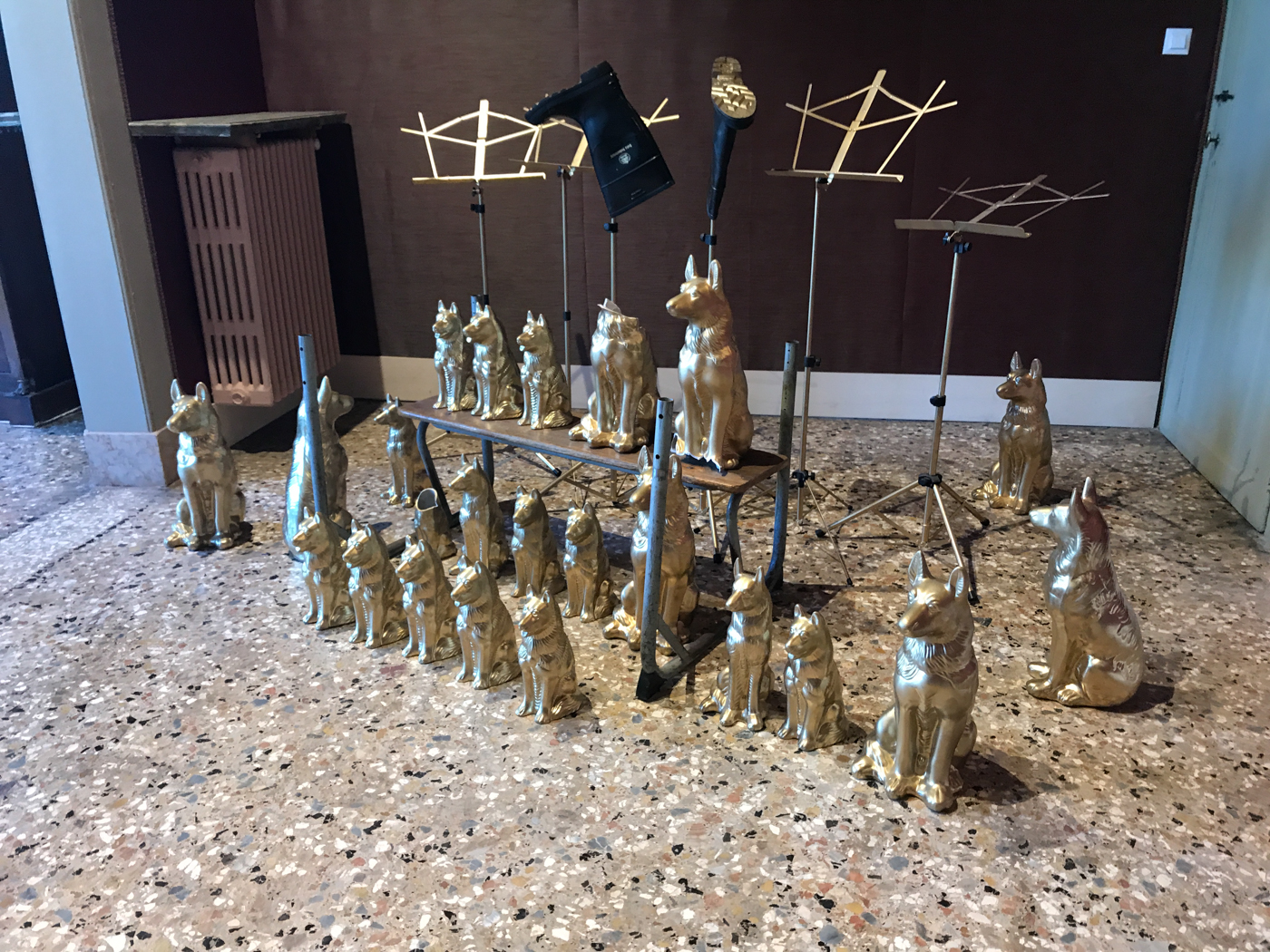 Bopape’s work is an enormous construction of soil, ceramics, herbs, crystals, ash and bricks titled mabu/mubu/mmu. She was selected as the winner of the Future Generation Art Prize because of the personal and political nature of her work which calls into question women’s rights and identities – something that’s especially pertinent in South Africa. 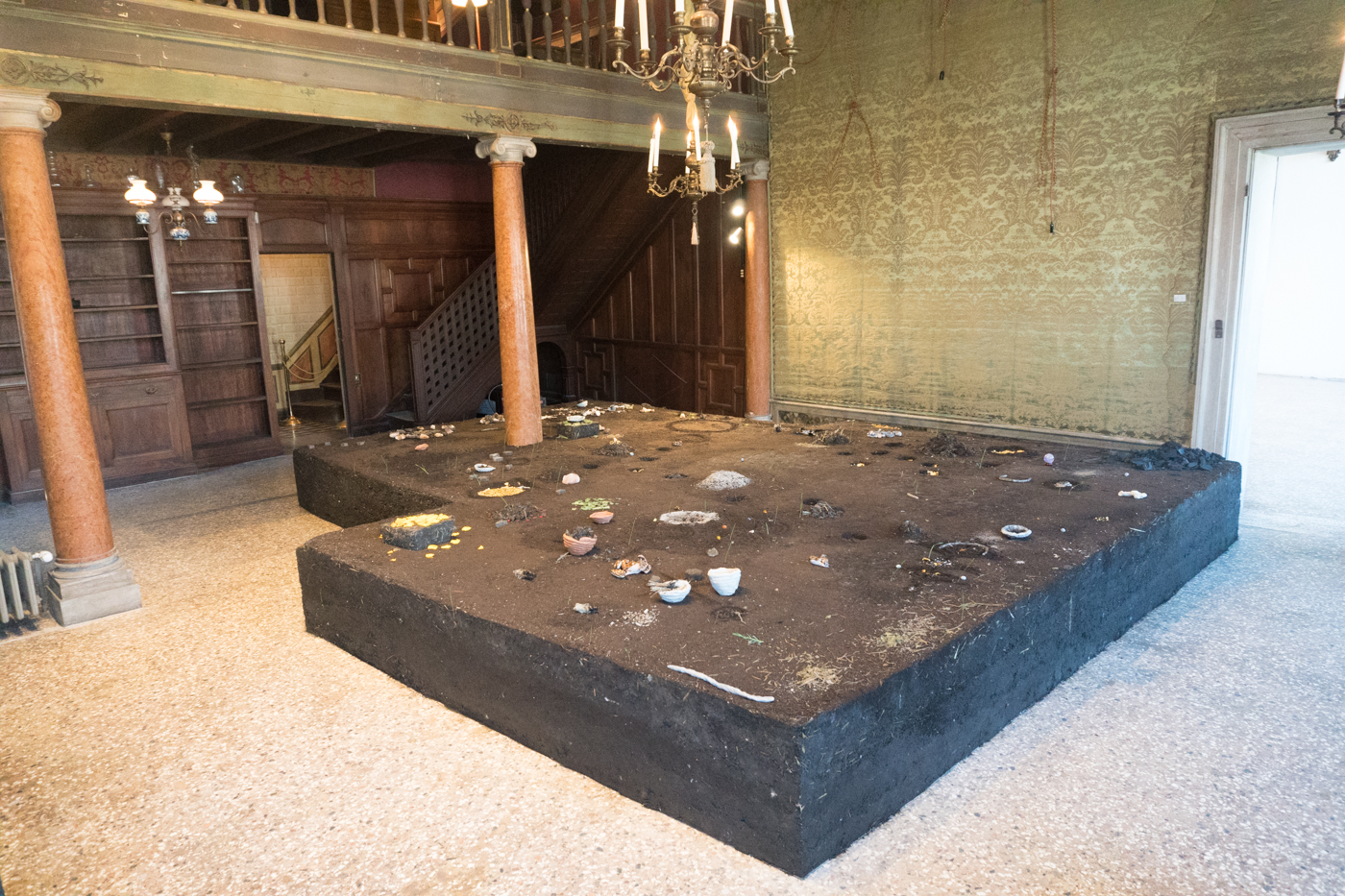 Also, South African artist Rodan Kane Hart was commissioned by the Swatch group (one of the only corporate sponsors of the biennale) to create a series of metallic masks moulded around busts. Forty masks create a large amphitheatre in the Swatch space, signifying the death of West as the central bastion of ideas and artistic practice.