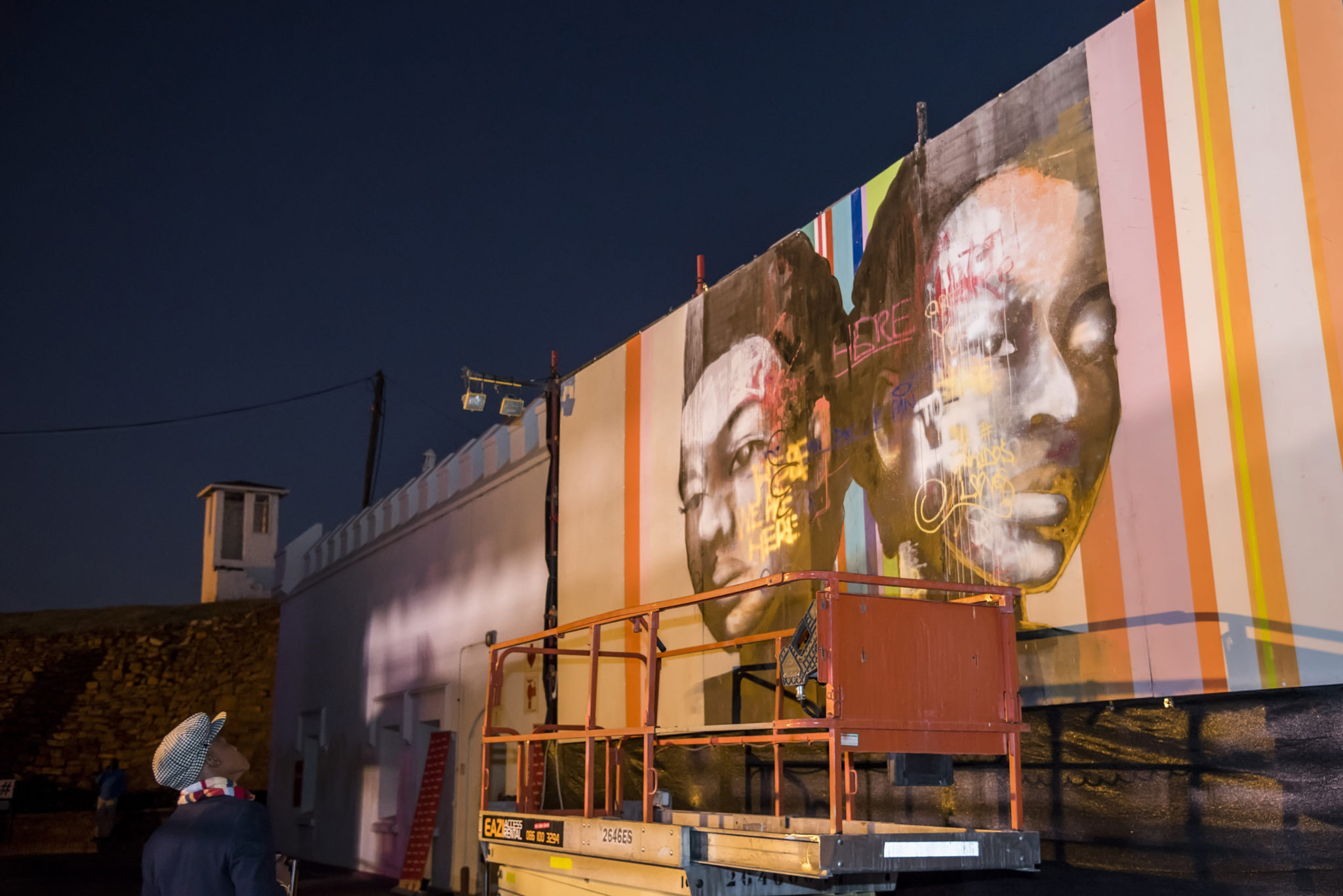 The Jozi crowds turned up decked out in their hottest threads and shimmied to amazing live local music backed up by art, design, and fashion at Constitution Hill last weekend. We were there at 2017’s hottest celebration of creative freedom.

It began on Wednesday 21 June and ended on Sunday 25 June, and if you missed it this year make a note-to-self to never let that happen again! The Bashu Uhuru Freedom Fest sponsored by Nando’s commemorated the Soweto uprisings of 1976, and it was a bootie-shaking, soul-lifting, happiness-inspiring voicing of South Africa’s incredibly diverse young creative talent at Joburg’s Constitution Hill.

‘Conversations of Freedom’ talks and ‘Visions of Freedom’ film screenings earlier in the festival were fully booked, but the real crowds, estimated at 8,000 concert goers, rolled in on Saturday, making the event’s free tickets really count. 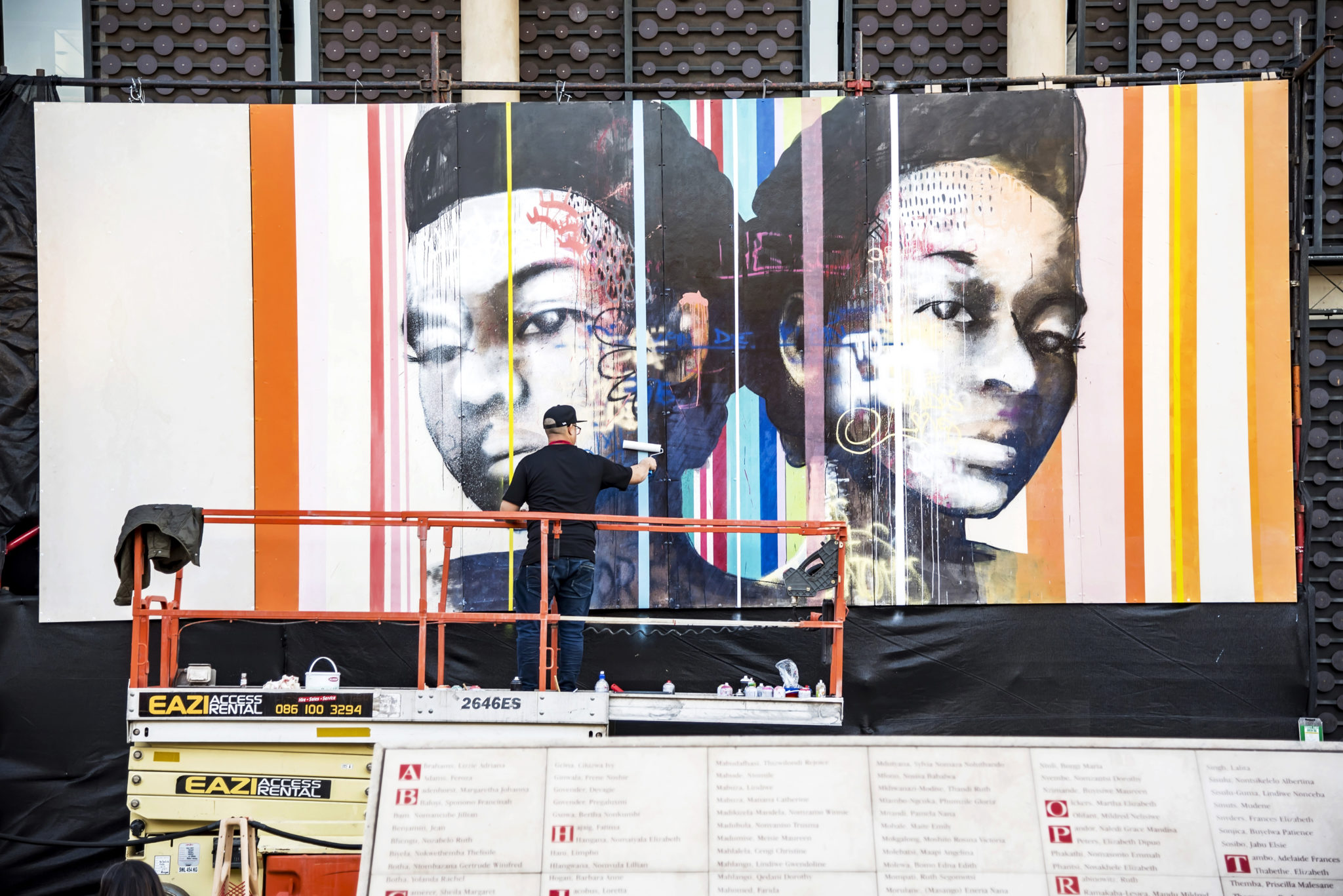 Established and emerging music talents from Thandiswa Mazwai, Stogie T, and Zola to Sistamatik, Melo B Jones, and Johnny Cradle wowed the crowds on the Nando’s and Afropunk stages from early afternoon to midnight on Saturday.

The Locrate market was in full swing on Saturday and Sunday with cutting edge local fashion inspiring the crowds.

Another interesting dimension that played out at the fest was Nando’s Creative Collision. In the spirit of nurturing young South African talent, this was a Nando’s sponsored round up of six diverse young South African creatives from the art, design, and music worlds. These creatives were each featured in the Basha line up and also got to hang together to experience a cross-discipline of Creative Collision in different ways. Nando’s-sponsored musos Gigi LaMayne, Dope Saint Jude, and Nonku Phiri all knocked out the crowds onstage, while in the spirit of a true Creative Collision, the circle was made wider by bringing art and design into the music mix. Over the course of the weekend, artist Dion Cupido soaked up the tunes while he painted a giant graffiti-style portrait alongside the stage and young designers Candice Lawrence and Tulsha Booysen also drew the crowds as they exhibited and co-created prototypes of a new range of lights that were the result of a two-week Nando’s Co-Lab co-ordinated by Tracy-Lee Lynch. A David Krynauw pod created a spectacular ‘stage’ for the lighting exhibition as well. 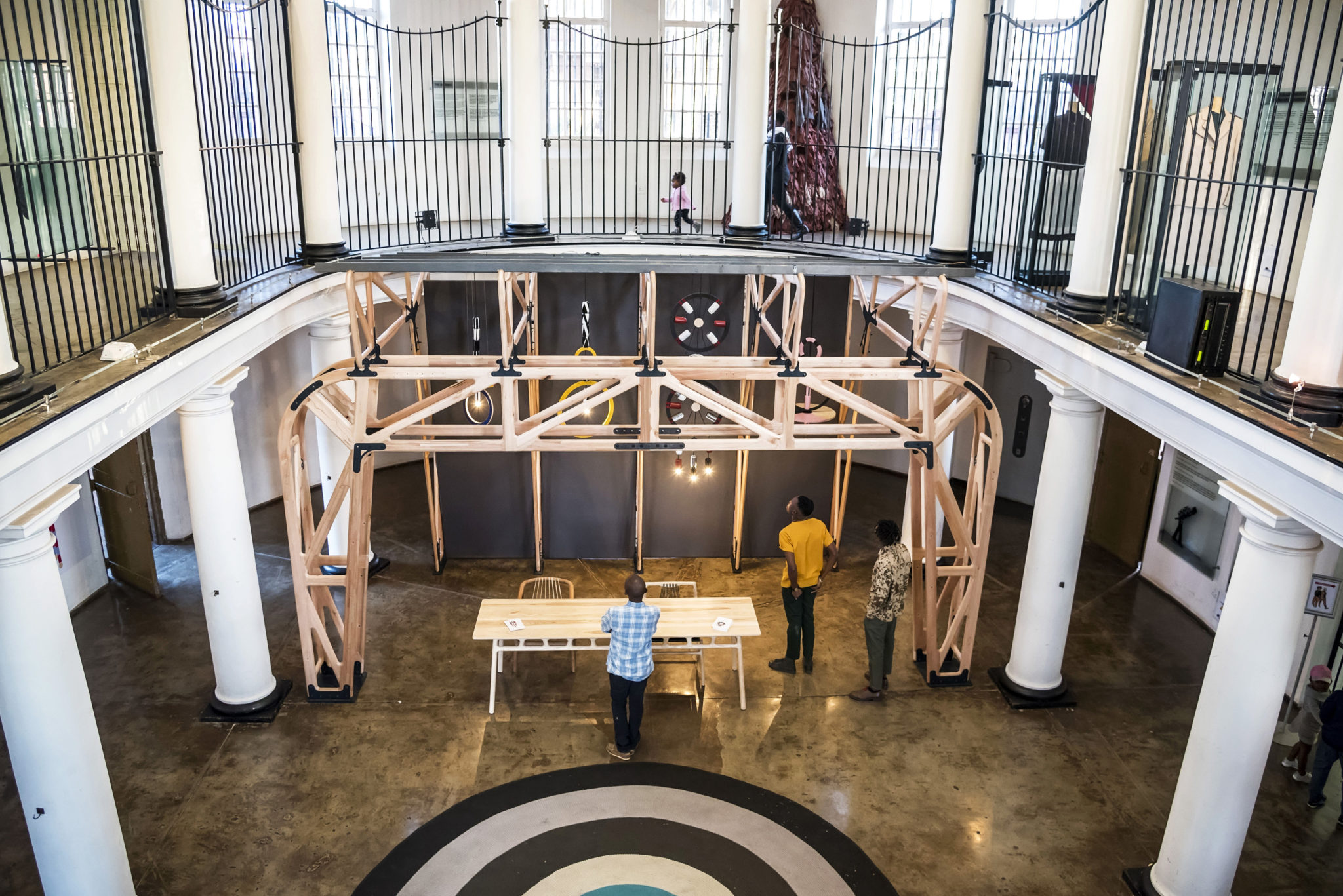 Inside one of David Krynauw’s pods.

We chatted to the half dozen hot young creatives to piece together a wonderful celebration of diverse and optimistic South African talent.

Rapper Gigi LaMayne from Joburg is a participant in Nando’s Music Exchange. Her brand new single Lobola topped many South African charts last weekend. Gigi took it away on the main stage with a big gold ‘G’ glittering on her black superhero getup and had the crowd eating out of her hand. 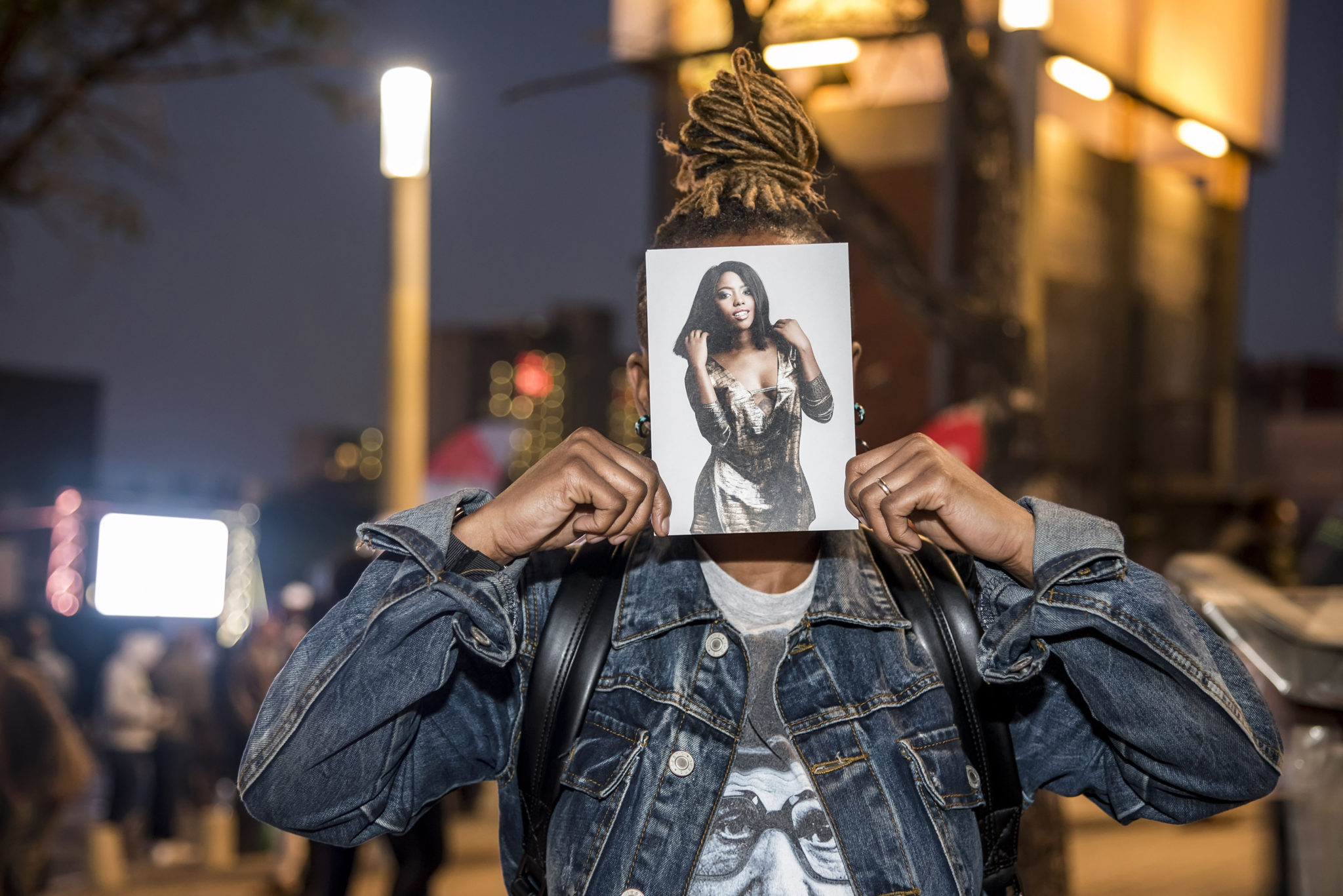 Rapper Dope Saint Jude from Elsies River (also a Nando’s Music Exchange participant) brought with her a loyal troupe of musicians and dancers that each brought their own magic to their late-night gig. 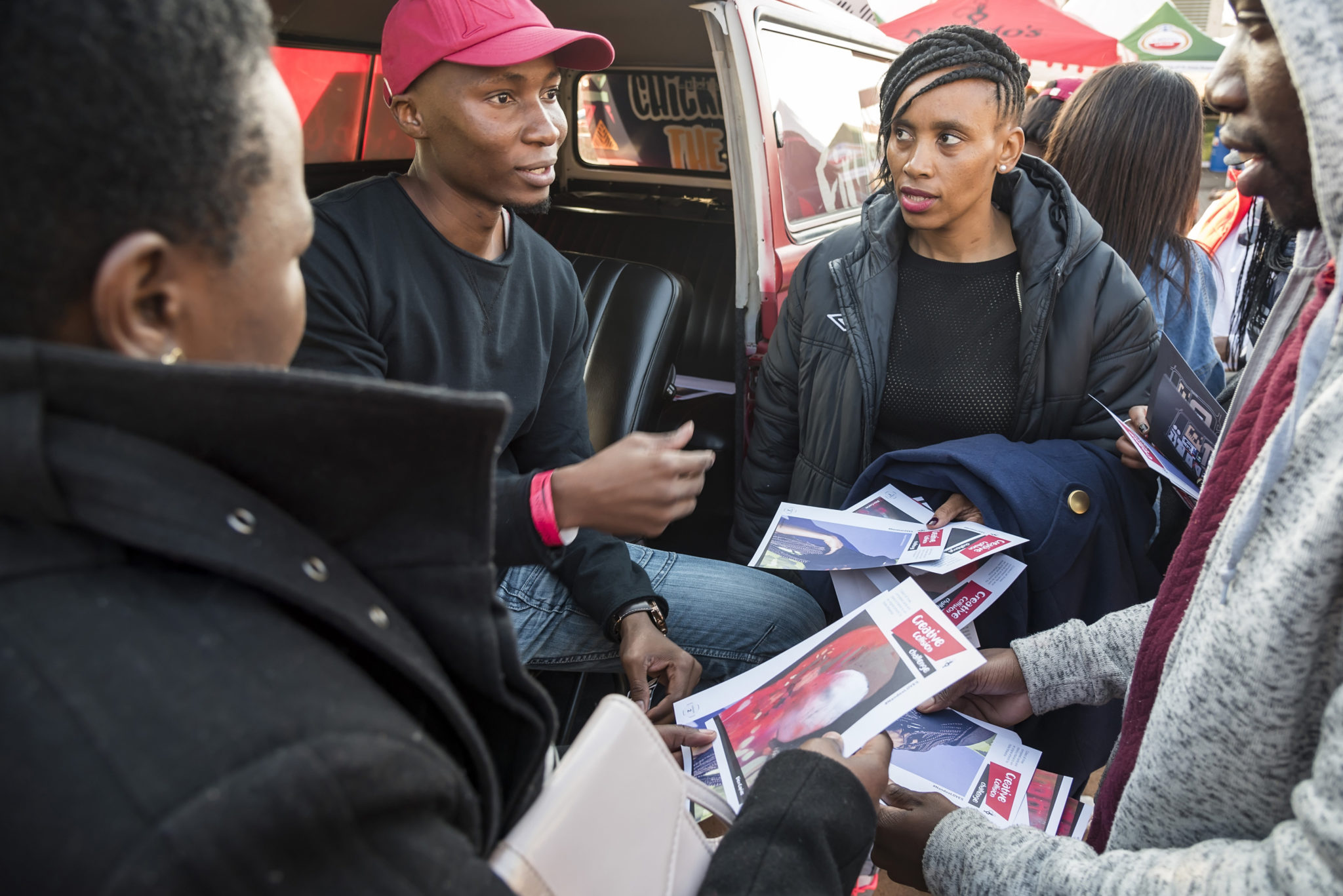 Singer-songwriter Nonku Phiri flew back from a trip to Berlin a few days before the festival and her remarkable Sunday afternoon performance on the lawns of the Women’s Gaol Courtyard was goosebump-provoking. 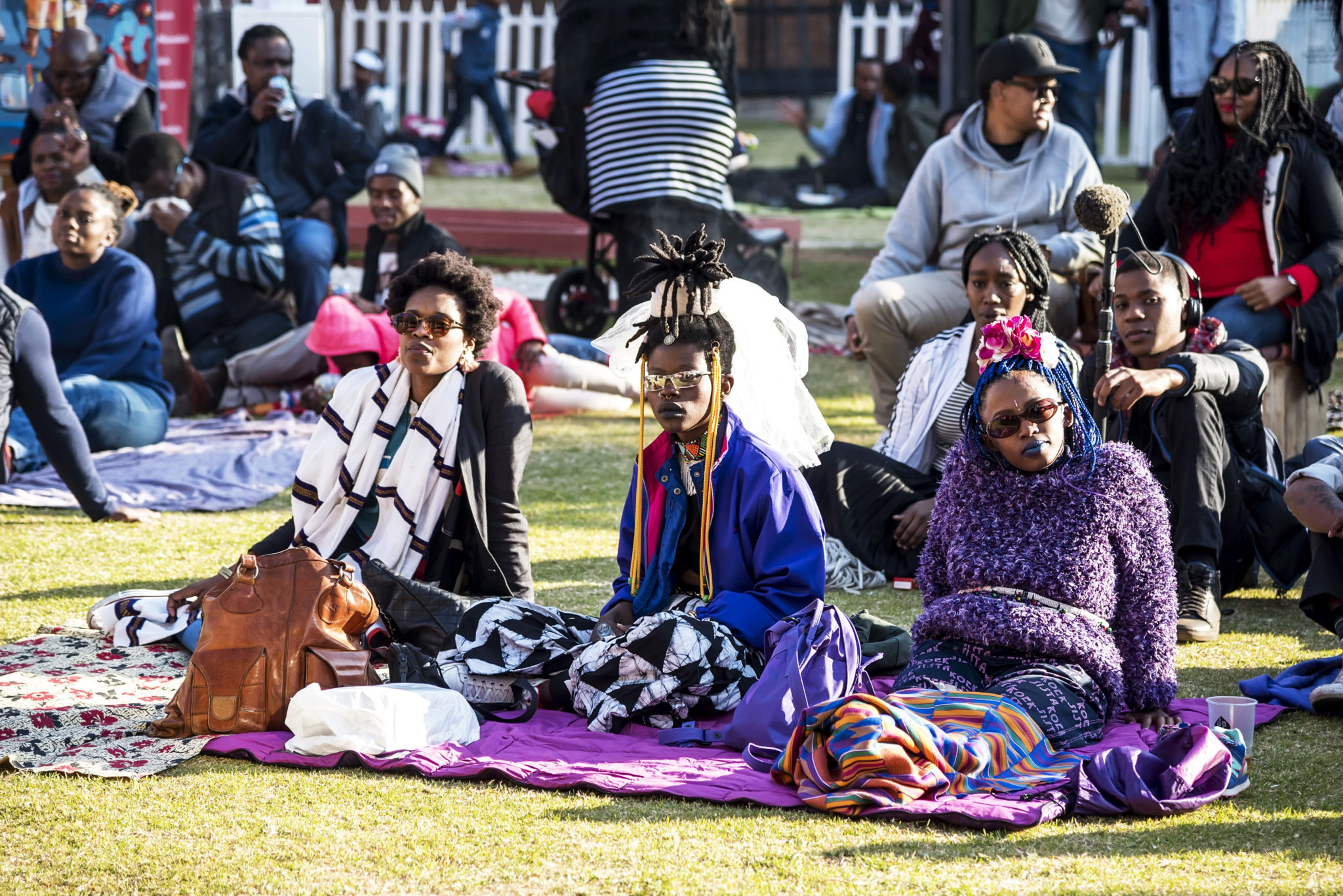 Dion Cupido painted a graffiti-style portrait alongside the stage to the vibes of the live music that rocked Con Hill.

“I wanted to explore two sides of a face,” says Dion. “There is that song Smile Though Your Heart Is Breaking by Charlie Chaplin and I feel that the way we live our lives is that we walk around with these smiles on our faces, but on the other side there’s something else that’s happening and a face that’s hidden from others and even from ourselves. It’s like we go through life trying to quiet that side of us because there’s either too much pain there or there’s too much of a challenge. This portrait was about exploring the side that we need to make peace with, and it’s an idea I want to play with more in my work.” 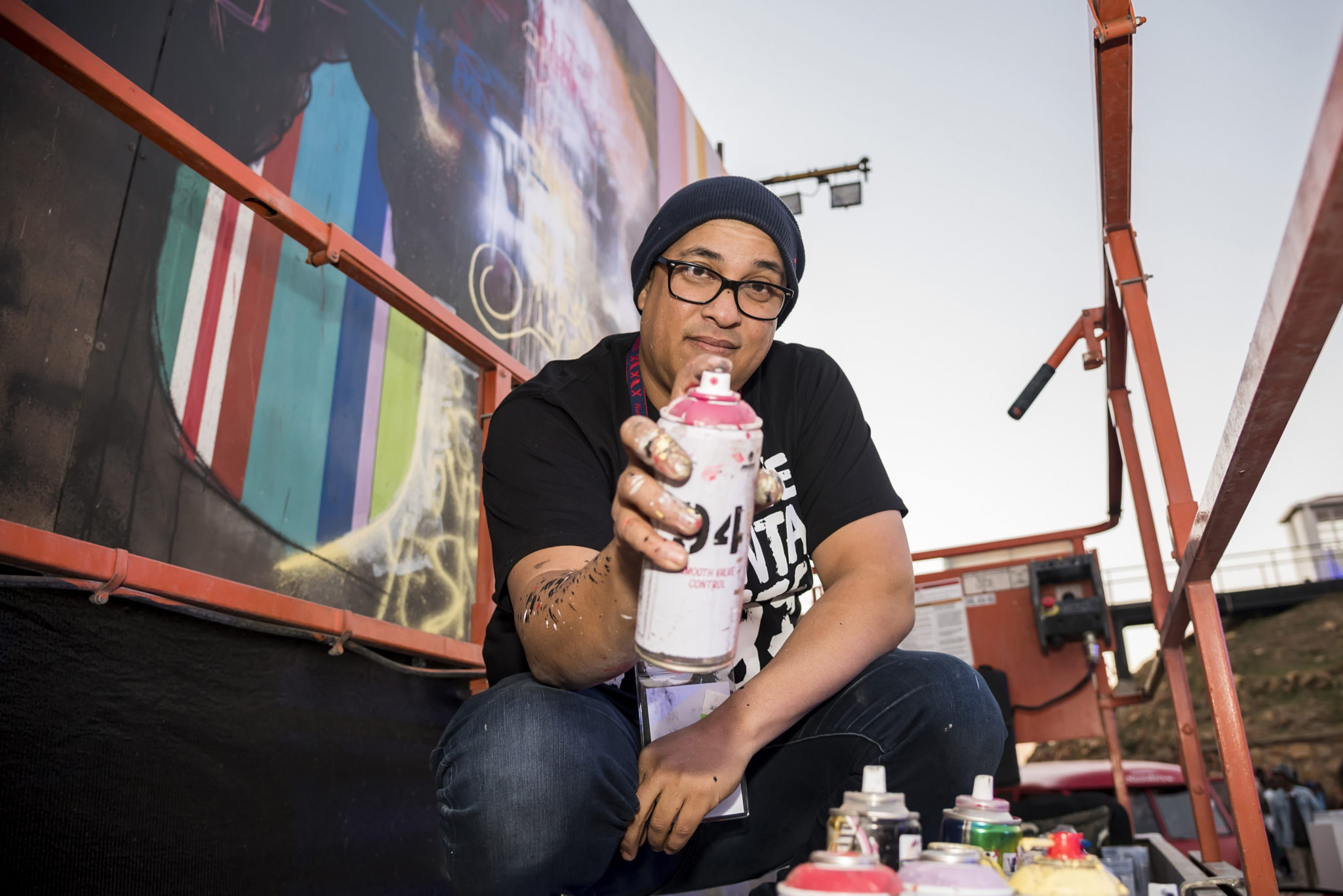 The super-sized artwork, titled She Loves Me, She Loves Me Not’ shall soon be permanently installed outside Nando’s Bryanston.

Nando’s Hot Young Designer talent search founders Candice Lawrence and Tulsha Booysen also gathered crowds as they exhibited prototypes of a new range of lights that were the result of a two-week Nando’s Co-Lab coordinated by Tracy-Lee Lynch. The two young designers share a love for African beadwork, recycled materials, and modular design, and stepped up to the challenge of new, shared interpretations of common design ground.

“I’ve been wanting to experiment on an innovative collaboration so I was excited when this opportunity came up,” says Candice. “The fest has been an amazing experience personally, and to collaborate, and on site at Con Hill as well, has been incredible. I’ve met all sorts of creatives both inside and outside of the Nando’s Creative Collision team, from artists to musicians. It’s been so insightful to talk and realise that even though we do different things we all face similar challenges, from creative blocks, to things we want our other audiences to connect with. Understanding that we’re all going through the same thing has made me realise I can enjoy life a little more. I realise now that I’ll never necessarily feel like I’ve got to ‘the top of the mountain’ and that’s okay. Just to know other people are going through the same thing and doing something important makes me feel very good. The dancing and Jozi vibes at the Fest were amazing, and there was a moment on the dance floor when I really embraced a realization that I’m going to do what I do in my own way.” 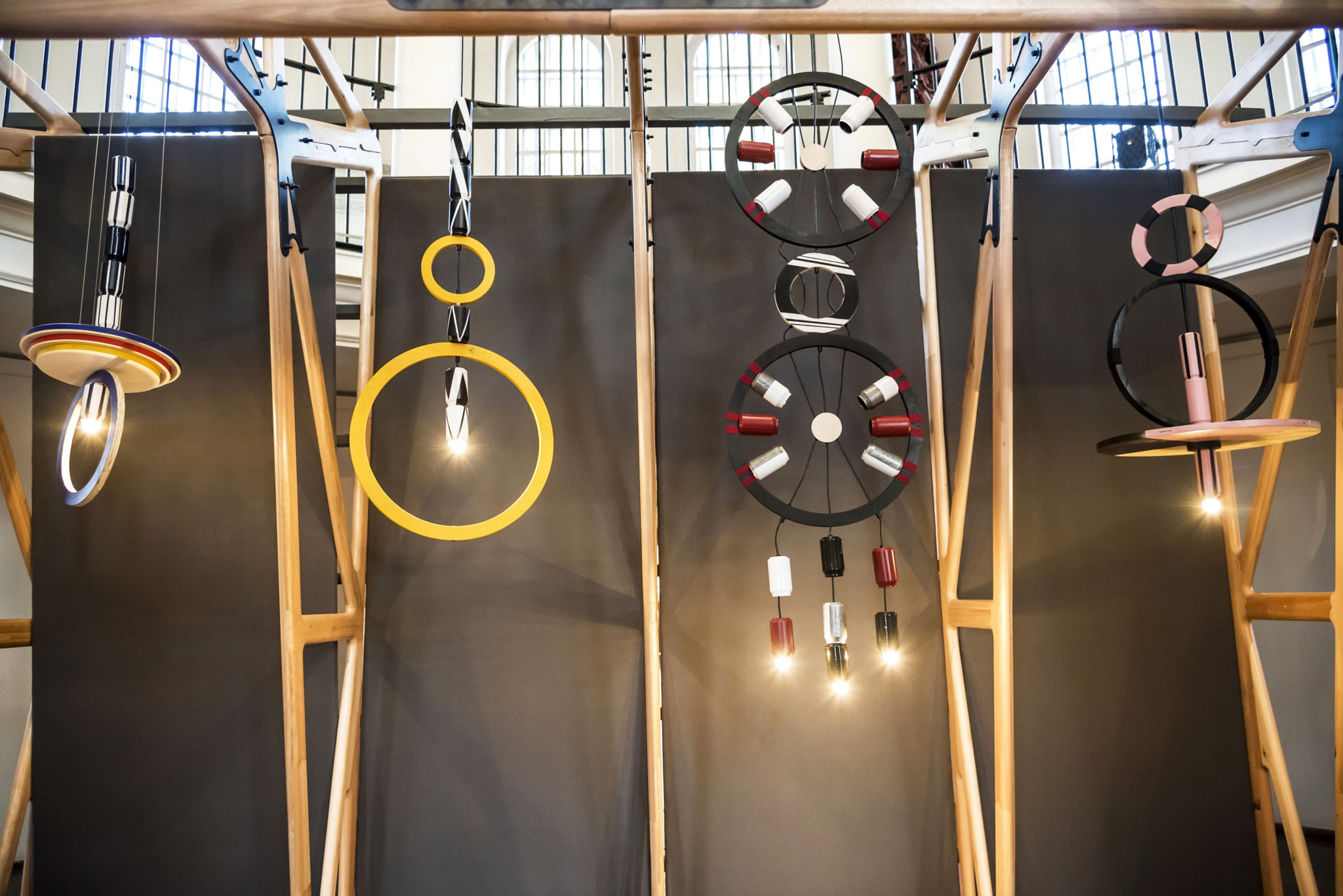 Young designer Tulsha Booysen who finished school last year commented, “I thought I’d be intimidated by The Nando’s Co-Lab and by Basha Uhuru itself, but instead I’ve been really motivated and inspired to look at things differently and to hear expressions from different societies. 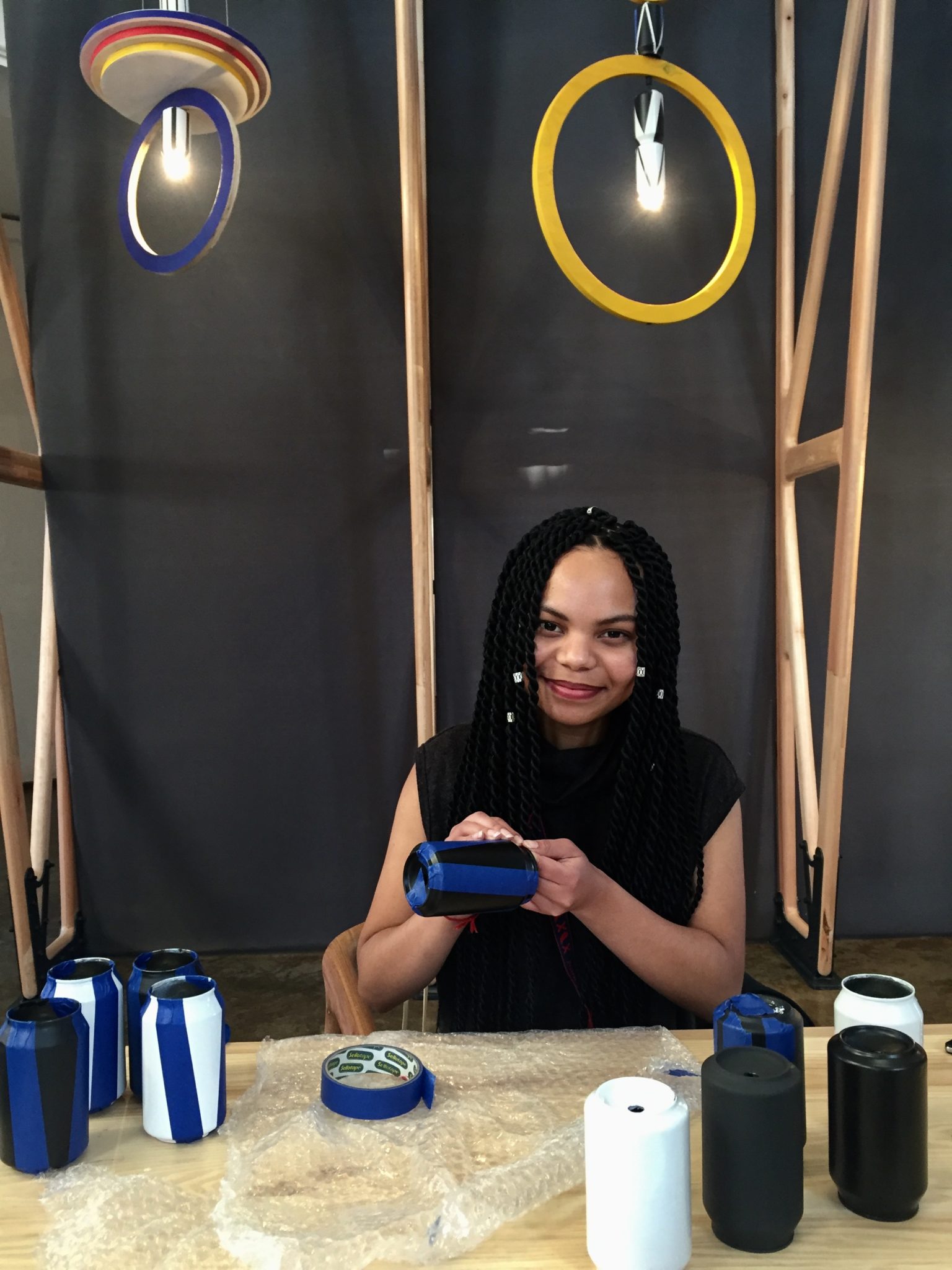 The light I designed as a finalist for the Nando’s Hot Young Designer Talent Search is made of cooldrink cans, because I’ve always hated the idea of littering. The cans become the bead components of that light, which is called the Can Beam. When I think of South Africa, I think cans are such a nod to the South African youth, and I thought that the cans transformed into a light really do represent an individual and the light that an individual casts by simply shining. 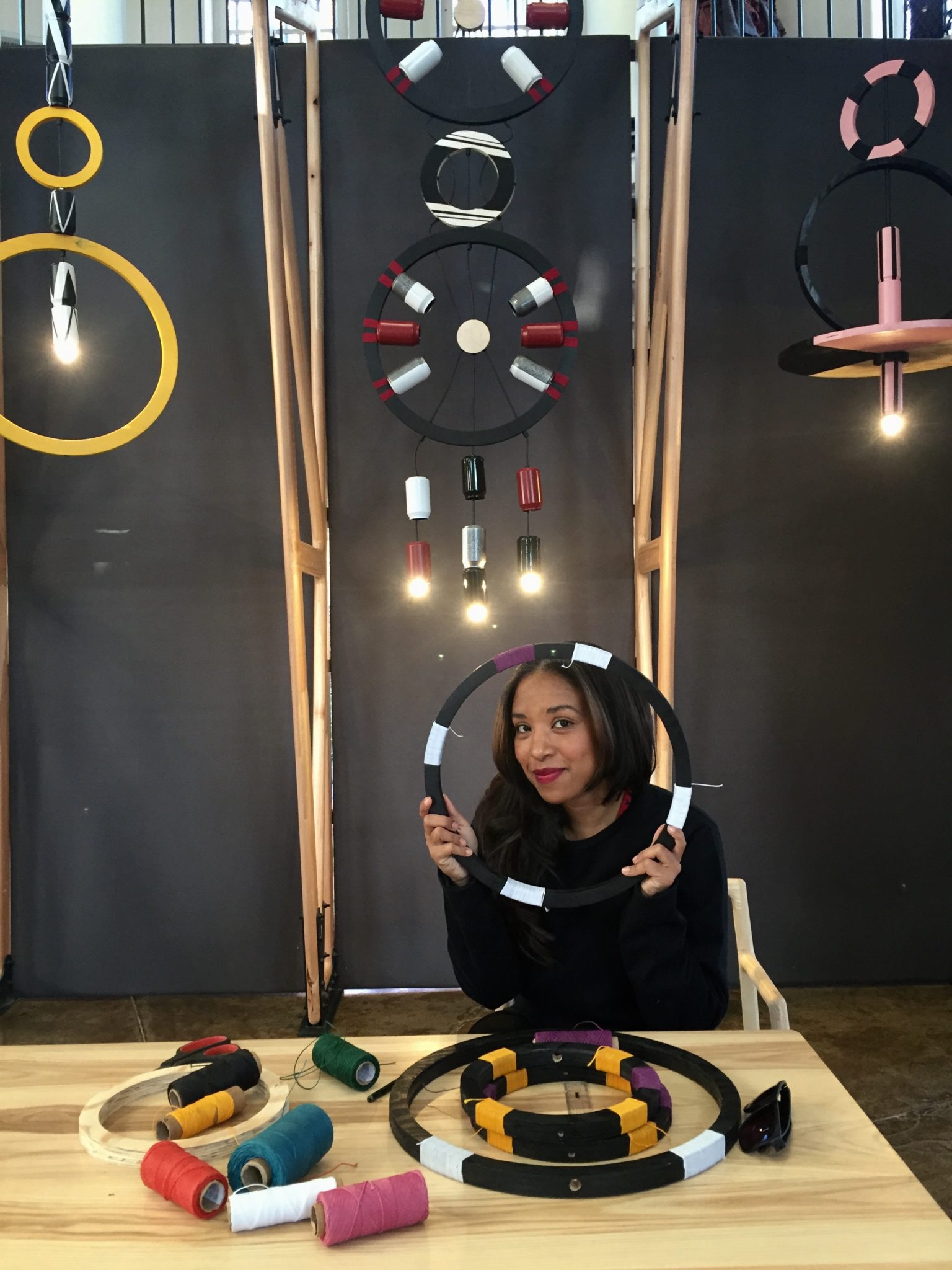 The stories behind Candice’s inspiration and my inspiration truly overlap in the new range of lights that came out of the Nando’s Co-Lab. Collaborating with Candice has been exciting, but very challenging, to step out of my comfort zone and tap into the creative mindset of a more established designer. The experience of this Creative Collision between design, art and music has changed me. Normally I’d look around for inspiration but now I know I need to look inside, and express how I feel. At school you’re not really encouraged to be who and what you want to be. You’re told to stick with what you know, and meeting all these other creative has opened up so many different realities and possibilities for me. Having worked with Candice I don’t feel so alone in figuring out and experimenting with different designs. As for musician Dope Saint Jude – oh my word! She’s so raw and sincere in her work! Experiencing her live music performance has shown me how I can approach my own work differently.” 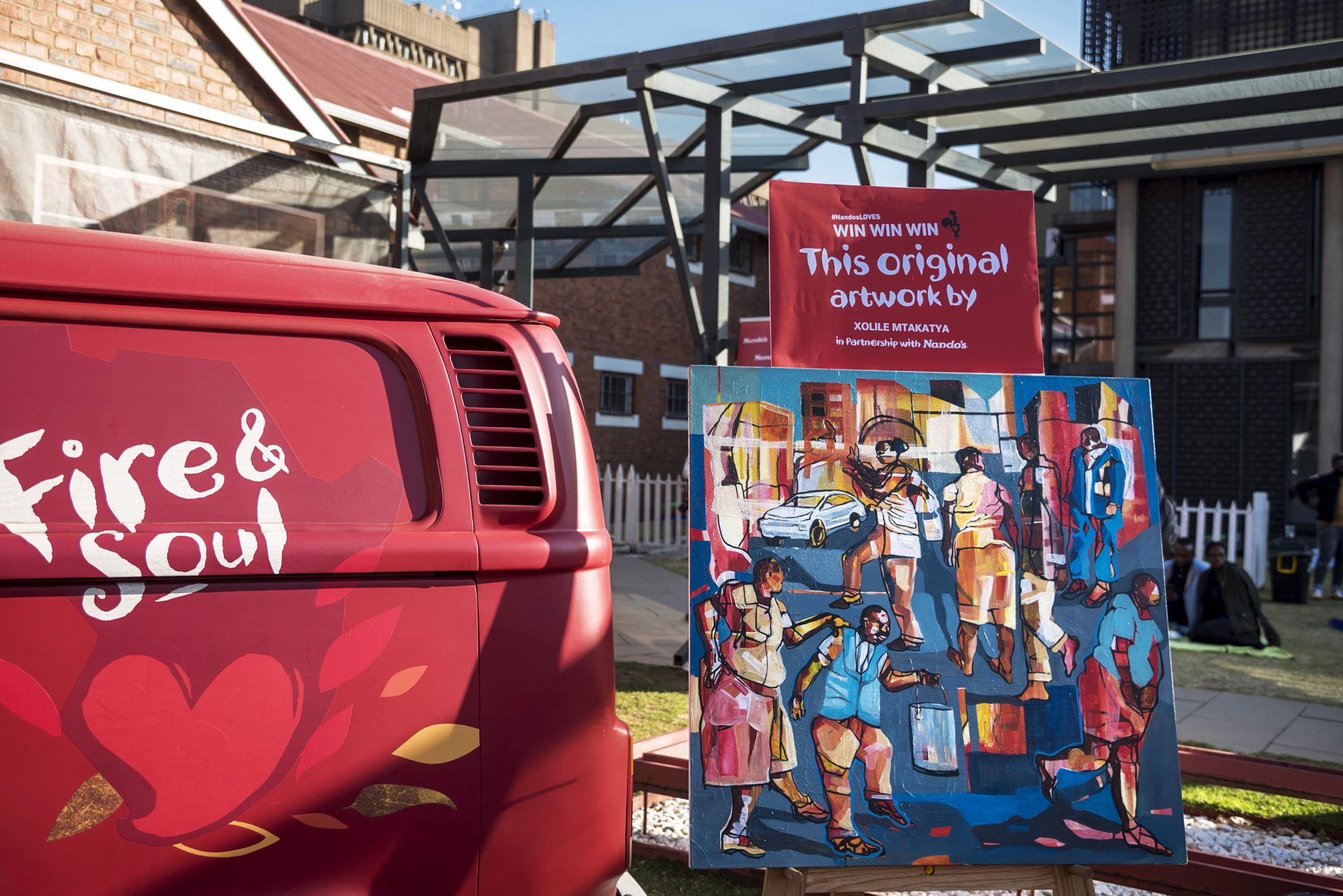 Each festival attendee had the chance to win an original artwork from Xolile Mtakaya. In the end, Mfondo Magubane from Joubert Park won the one-of-a-kind canvas piece.