Tattoo artistry has often been described as a uniquely embodied act of self transformation, an act of healing and a beautiful outward proclamation of individuality. While men still outnumber womxn in the tattoo world, that balance is slowly shifting globally and in South Africa. In part 2 of our series we catch up with five local female tattooists defying stereotypes, pushing boundaries in their field. They tell us what body modification means and how their practice appeals to the artist in each of them. 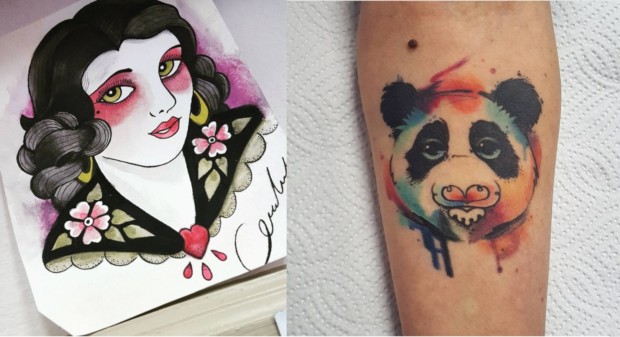 Instagram: @ChanelYselTattooArt
Age: 27
Salon: Hoodoo Tattoos, Cape Town
Number of tattoos: Not enough
First tattoo: Still one of my favorites is a sunflower positioned on the bridge of my left foot, done in a more realistic and soft pastel style that reads “Walking on Sunshine”.
Tattooing style and technique: I am a versatile artist in a variety of mediums but I am best known for my watercolour and floral style tattoos. 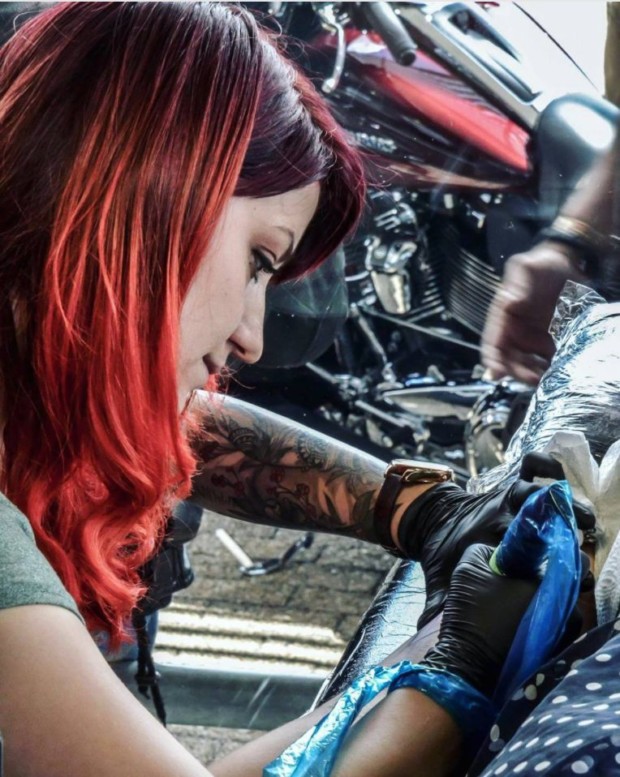 “Tattooing is merely scratching at the surface of the skin to reveal what is actually underneath,” believes Chanel who started tattooing in 2014. She elaborates, “It’s not just about inking the body. I believe that the tattoo is only a stamp adding colour, flow and dimension to the body, expressing a little part of my client’s soul as well as mine.” She draws her inspiration from photography, nature, books and other artists including her life partner. “I am a floral and colour lover and can’t help but surround myself with the beauty of flowers and the life that emanates from them.” On making it in a male-dominated industry she says, “I feel very honoured to be a part of this industry. Looking back at tattooing, it was mostly male dominated and may have been perceived as a hard, dark and muscular art form. With tattooing having moved into the mainstream, I find it very beneficial to be a female artist in the tattoo industry. It offers an opportunity to experience a softer, brighter and more feminine side to the industry and the art form.” 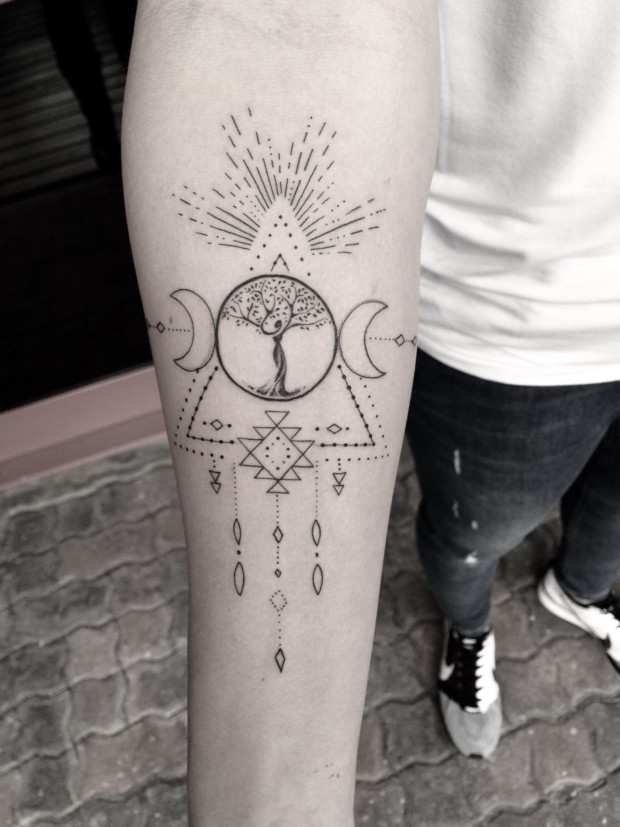 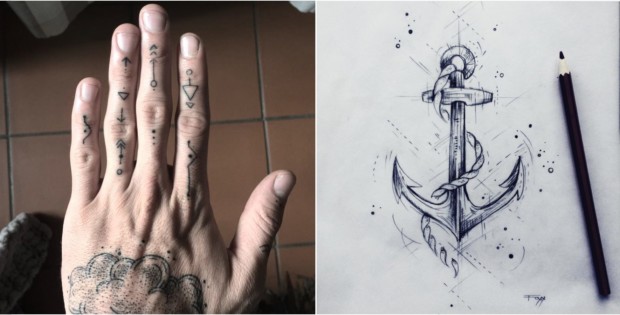 Instagram: @foxitini_tattoo
Age: 30
Salon: Sally Mustang Tattoos, Johannesburg
Number of tattoos: Roughly around 90
First tattoo: It was a sperm that looked like Casper on acid. That’s all I have to say about that. And I NEVER judge other first tattoos.
Tattooing style and technique: It’s a controlled chaos. An eclectic mix of abstract and whimsical elements. I like fine, clean lines, dots and the stranger things in life. 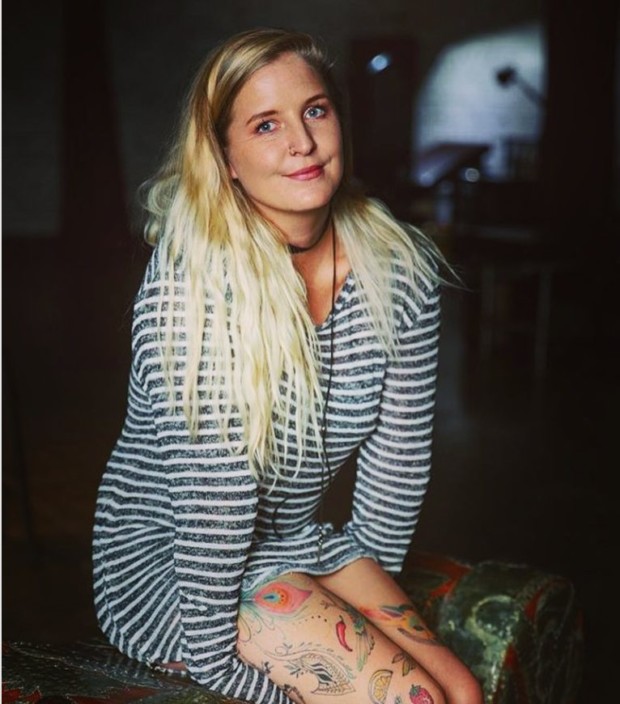 Roxy’s style is so distinct and delicate that it’s hard to believe she’s only been tattooing for two years. Her enthusiasm for her practice is infectious. “I love making art and skin is the ultimate canvas. It’s the only thing you can take with you to the grave. And it’s an exceptionally challenging art form.” She believes that tattoos reflect their wearer. Of her own she says, “There are definite elements that reflect my inner soul. There is darkness, there is light and a bit of the in-between.” Attempting to navigate the male-dominated tattoo space has been full of challenges for Roxy. She is the only female artist at her parlor. “But I love what I do and it shows in my work. Luckily the men I work with are super rad and we always encourage each other,” she affirms. 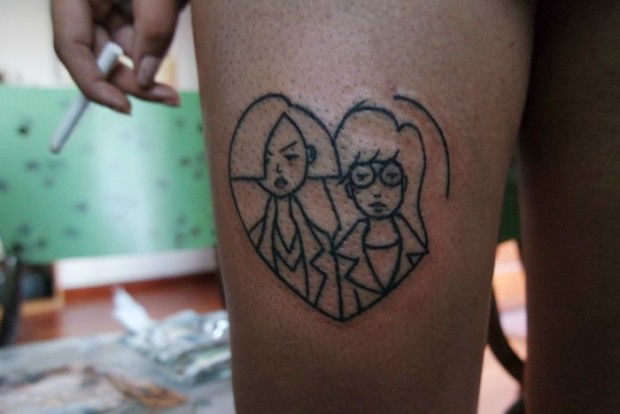 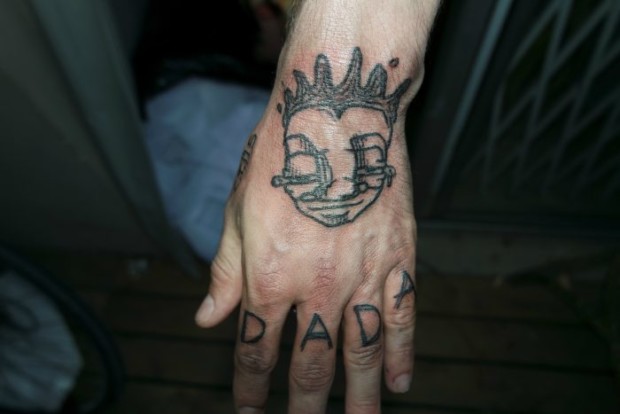 Instagram: @dadakhanyisa
Age: 26
Number of tattoos: Six; one by someone else and the rest by myself
First tattoo: One of the first whale characters I sketched. The eclectic artist Evl Jon needed money to go back to Joburg and he had a tattoo machine so I got my first tattoo.
Tattooing style and technique: Lots of line work and freestyle fun. 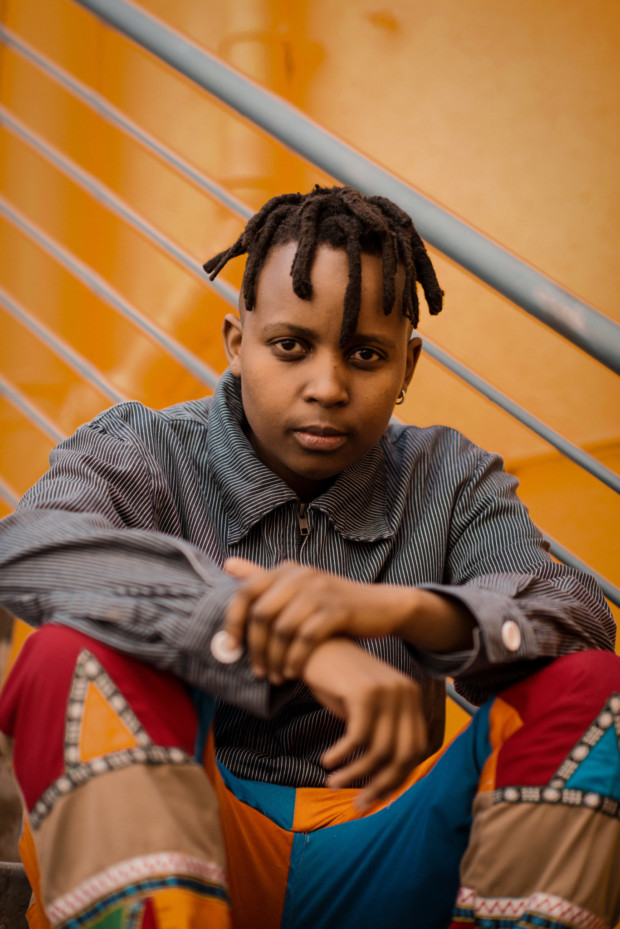 “There’s something about the relationship between skin, ink, pain and tolerance that always keeps me invested in this artform. I learn new things about the human body through tattooing,” says Dada, who began tattooing at the end of 2014, learning through trial and error. “I had convinced my mom to buy me a tattoo machine. I promised that she wouldn’t have to give me a monthly allowance,” they share. Dada – an independent tattoo artist – brings to bear their experience as a fine artist when tattooing, using skin as a practicing canvas to reflect graphic interests. Inspiration is found for what is drawn from “life, earth and all its elements”. 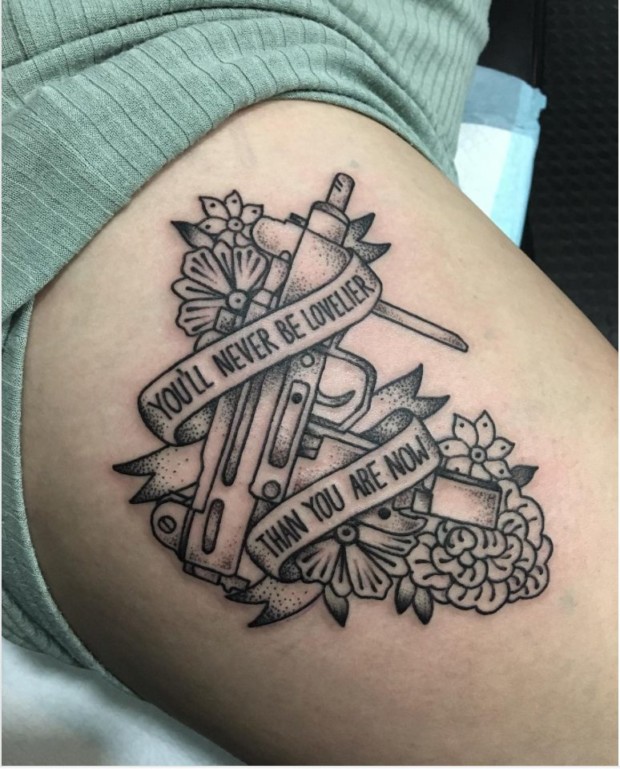 Instagram: @ladylucktattooartist
Salon: Mr Lucky’s Cape Town Tattoo, Cape Town
Age: 25
Number of tattoos: The last time I counted it was around 21
First tattoo: I was 18 years old. I got a black and blue feather by tattooist Milo “Mr Lucky'” Marcer. At the time he was at Metal Machine and I ended up doing my apprenticeship with him a few years later.
Tattooing style and technique: I’d say it changes a lot but I am a sucker for the finer details and I love working with lots of black ink. 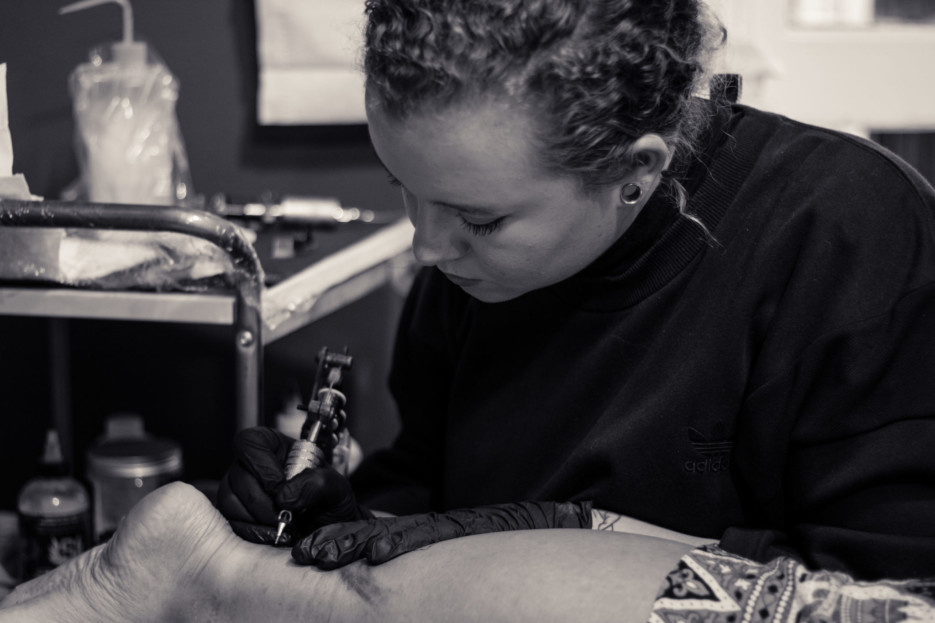 The permanency of the art form inspired Tanya to begin tattooing at 22 years old. “Taking ownership of one’s body and making the decision to permanently alter one’s appearance is pretty radical. Being able to take people through that process feels really good.” In terms of subject matter, she tends toward occult symbols and finely detailed, organic pieces. “I love scientific and botanical illustrations and nature in general. Anything unexplained, esoteric and morbid also fascinates me.” Tanya says she’s been embraced by the tattoo industry. “I haven’t experienced any discrimination or obstacles in my field because of my gender. I know this would not have been the case a few decades back but times have changed.” 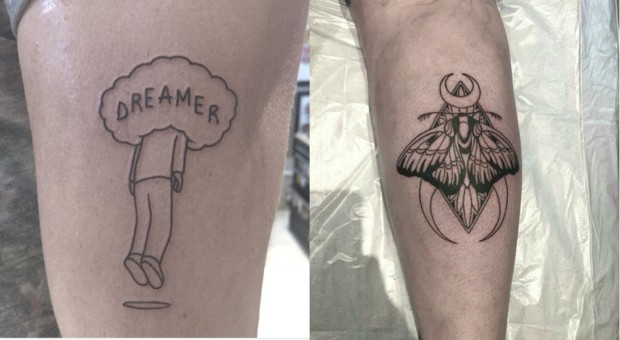 Instagram: @Hilaryrandle
Age: 32
Salon: Good Things Tattoo Co, Cape Town
Number of tattoos: I’ve lost count over the years. I still have a lot of prime space. I am an art collector and work with so many amazing artists that now I just want an original piece by the artist in their style.
First tattoo: I got an illustration by US artist Derek Hess on my thigh in Kalk Bay years ago. The tattoo is covered now. I placed a small image on a big space, which was not the wisest decision.
Tattooing style and technique: It’s still developing. I am slowly leaning toward the more traditional and neo-traditional side of tattooing. Most of my clients stick to black and grey so I don’t do a lot of colour pieces. 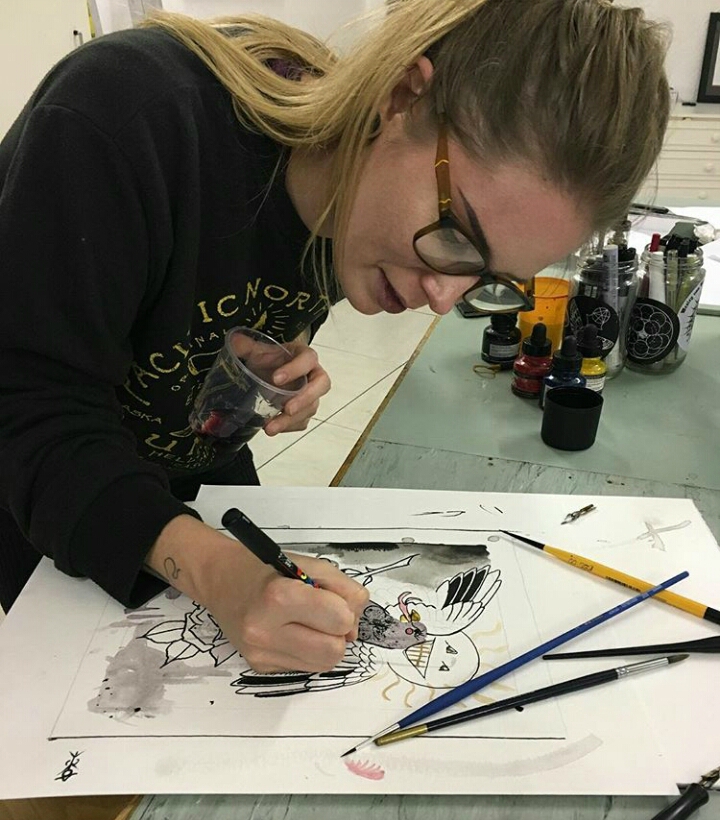 Hilary honed her craft as an apprentice at a small studio in Muizenberg, in Cape Town, when she was 27 years old. The origin of her interest in tattoo art and culture came from “artists I admired when I was younger whether they were musicians, illustrators or painters who had tattoos. They were interesting people who were talented in there field so I guess I made a connection that interesting people have tattoos. I’ve always liked the look of tattoos and the taboo culture that surrounds it.” Hilary derives inspiration from how she feels day-to-day. “You can tell a lot about someone’s head space from what they draw.” She is also influenced by what the client wants to wear on their body, “If it’s something you are amped on the inspiration flows.” She has always worked in male dominant industries, from yacht building to tattooing. “I guess you’d say I enjoy it,” she shares.