07 Sep Street view: Take a tour of 11 of Joburg’s most iconic public artworks

Posted at 13:28h in Art by Vuyiswa Xekatwane
1 Like

Johannesburg, like most cities, is a whirlwind of sights, sounds, people, hustles and emergencies. For all its rich history, this is a city that makes it hard to stop and take in the little things, like architecture or grand pieces of public art. Urgency blurs everything, it puts your guard up and dictates your gaze – tells you to stay in your own lane; you’re either looking straight ahead or down but rarely around.

In a country hailed for its rich art and cultural heritage, among the many things that indicate a disparity between the rich and poor (read “black people”), is the lack of access to or education around art. “Reputable” art is often confined to exclusive art galleries and museums, while public art is often viewed as militaristic and outdated.

Yet, despite the popular narrative and beyond the bustle of chancers and dreamers, Johannesburg features a number of great public artworks that not only reflects the city’s history, but that of South Africa and its people. And because democratising art is important, here are 11 of some of Johannesburg’s most iconic and historical public art pieces. All images by Kgomotso Neto.

Where: Corner Rissik and Fox street 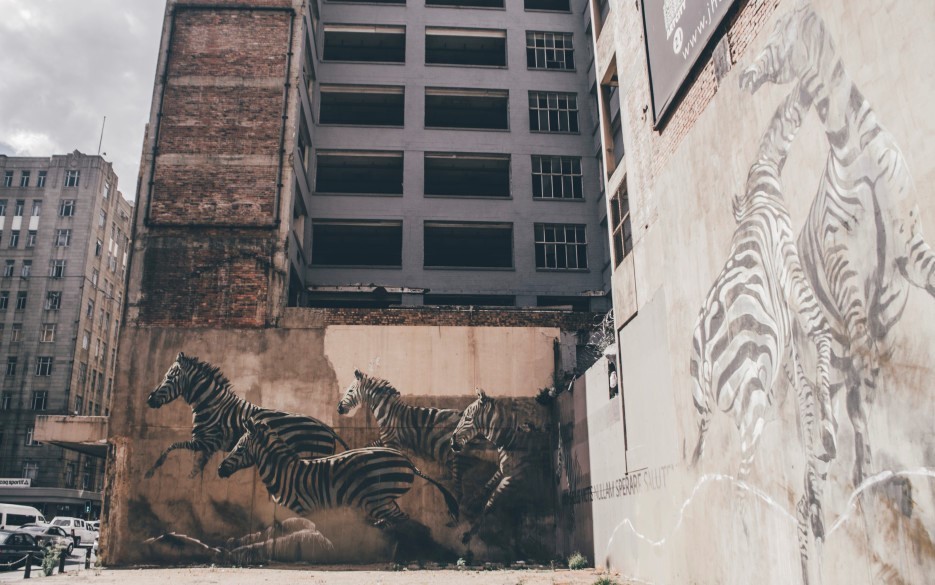 Spanning two adjacent walls of a dilapidated department store, artist Faith 47’s Una Salus Victis Nullam Sperare Salutem is a majestic mural of zebras that gives a sense of action and energy to a city plagued with urban decay. Put up in 2015, the piece’s title Una Salus Victis Nullam Sperare Salutem (the only hope for the doomed, is no hope at all) is derived from ancient Roman poet Virgil’s 10 000 line poem The Aeneid.

Democracy is Dialogue by Lawrence Lemaona 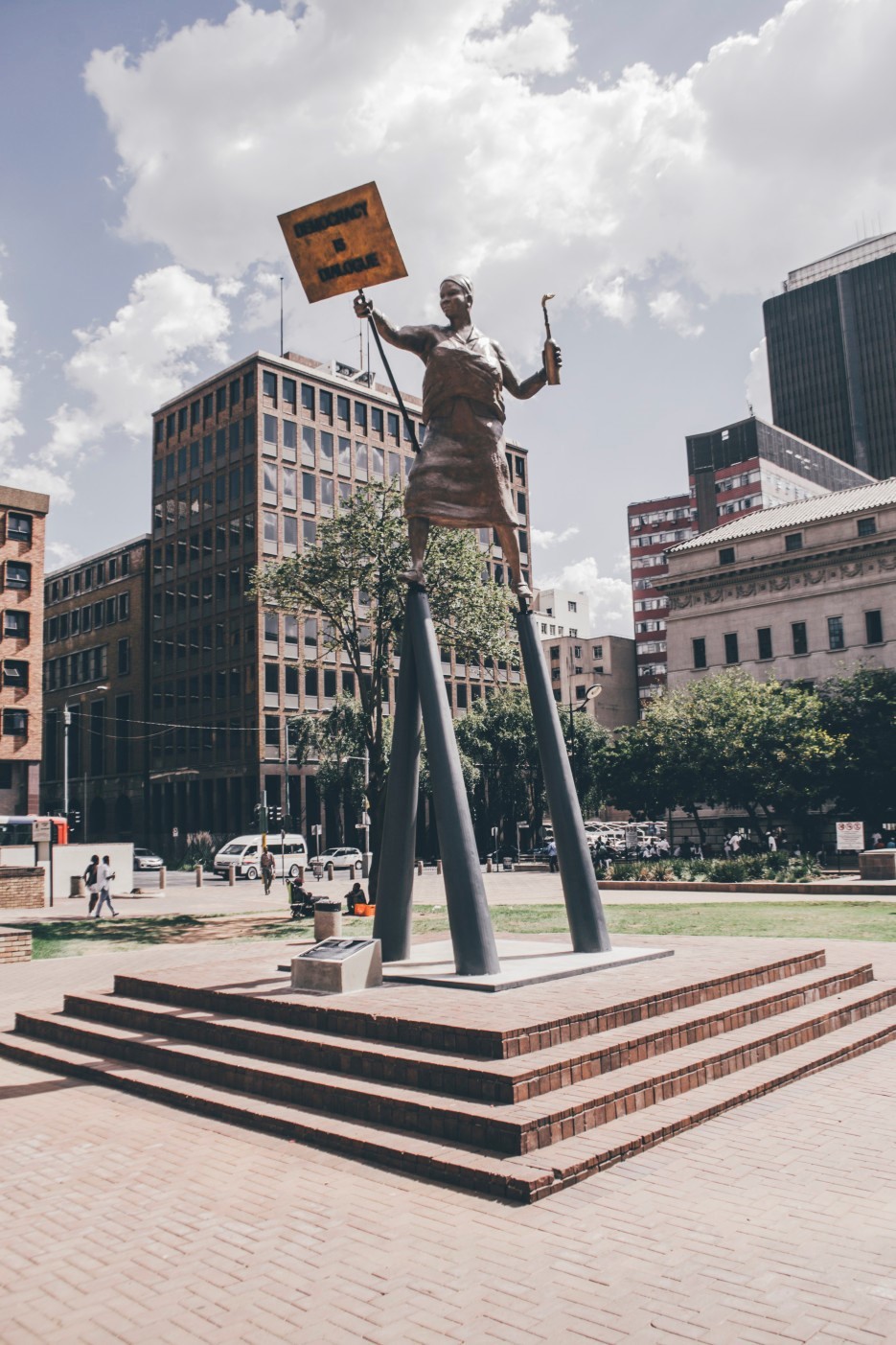 Situated in the former Market Square — now renamed Beyers Naudé Square after anti-apartheid activist Beyers Naudé — artist Lawrence Lemaona’s larger than life bronze statue was erected in the square as part of Women’s Day proceedings in 2015. What was once Johannesburg’s first market place, is one of the city’s popular sites for protests and a befitting place for Lawrence’s statue of a protesting woman.

The sculpture pays tribute to known and unknown heroines who have manned the frontlines in political and social pursuits of liberation. It is reminiscent of iconic images such as the Three Queens of the Virgin Islands and the Statue of Liberty, and features a woman armed with fire and a placard that reads, “Democracy is Dialogue”. 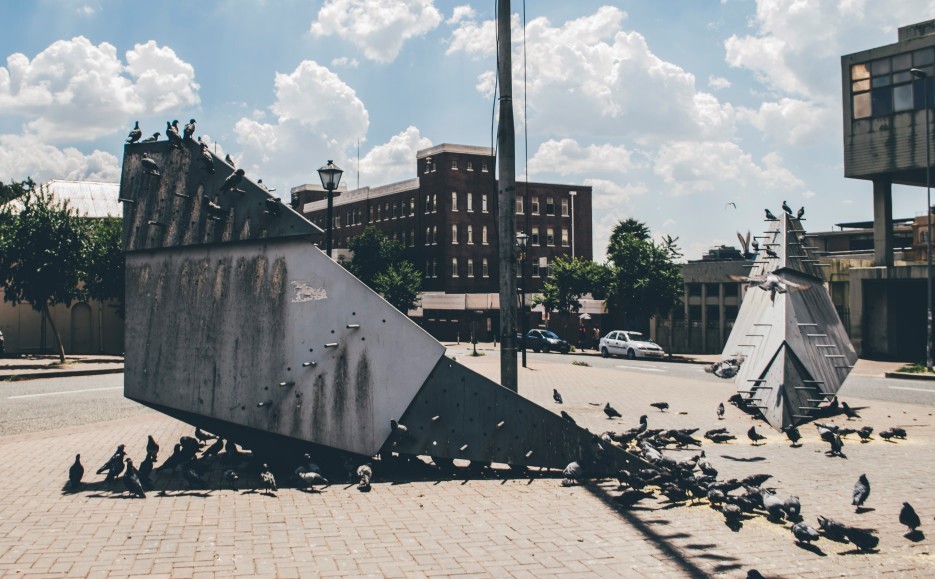 A block away from Johannesburg’s original Chinatown, three origami shaped steel pigeons by Gerhard and Maja Marx pay homage to the city’s longstanding Chinese community. Standing three metres tall, the sculptures form a triangle in Pigeon Square. With perching rods attached to the sculpture, the artworks — installed in 2009 — serve the dual purpose of a landmark and refuge for pigeons.

“The pigeon is primarily famed for its profound homing ability, known as a messenger, and this focus on the home and community is appropriate to both its position in front of the Family Court and to those who enter or return to the city from its western side,” says Gerhard.

The Shadow Boxer by Marco Cianfanelli 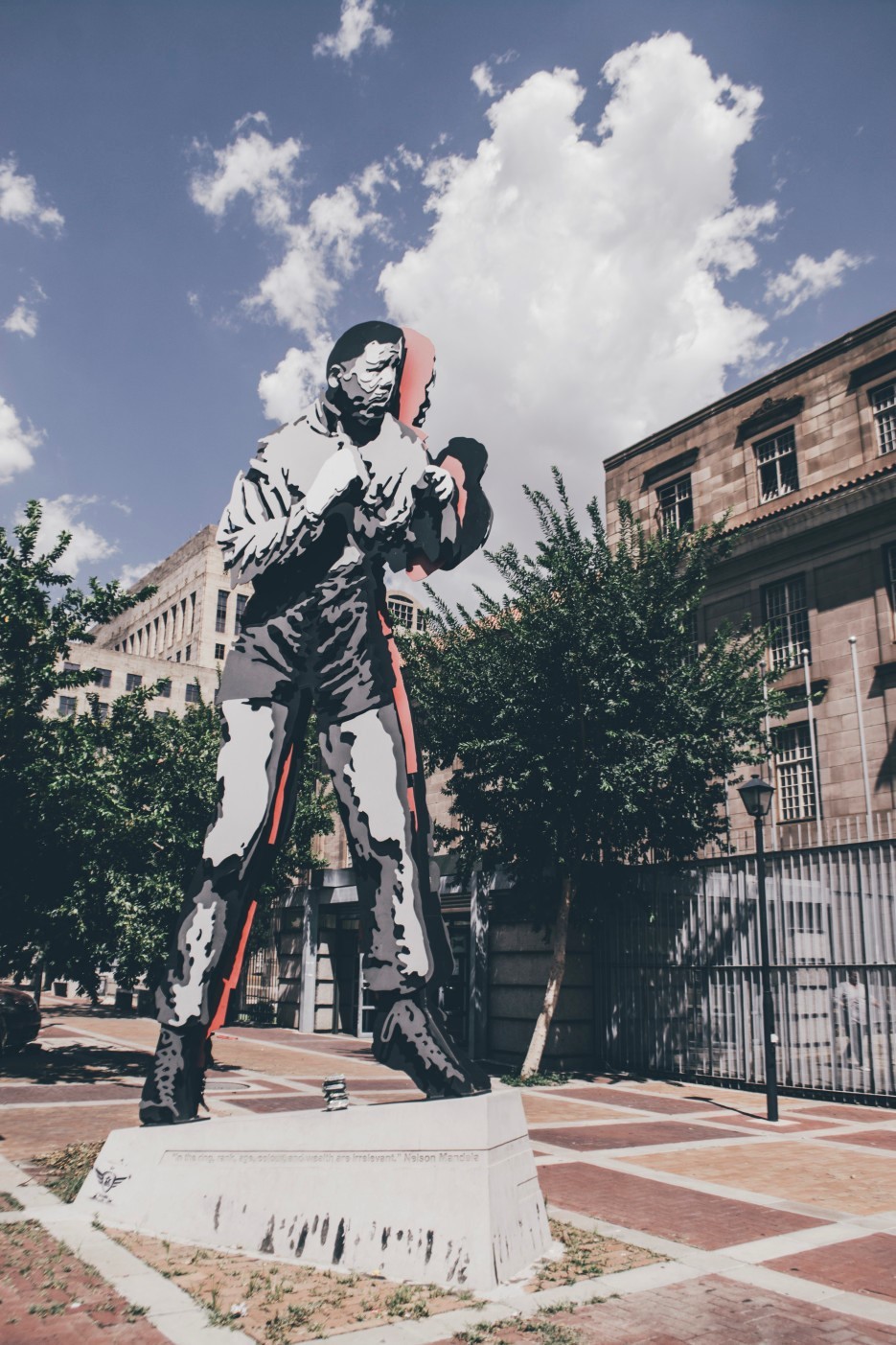 “I did not enjoy the violence of boxing so much as the science of it. I was intrigued by how one moved one’s body to protect oneself, how one used a strategy both to attack and retreat, how one paced oneself over a match.” – Nelson Mandela.

Sculpted by Marco Cianfanelli and unveiled in 2013 during Nelson Mandela’s fight with a lung infection, the Shadow Boxer statue (not to be confused with the Shadow Boxer Mural in Maboneng) is especially significant because of its location, between Chancellor House and the Johannesburg Magistrate’s court where in 1952 Nelson Mandela and Oliver Tambo opened the very first black law firm in South Africa. The sculpture also celebrates the work of late Drum magazine photographer Bob Gosani, who took the original image of a young sparring Mandela in 1953. 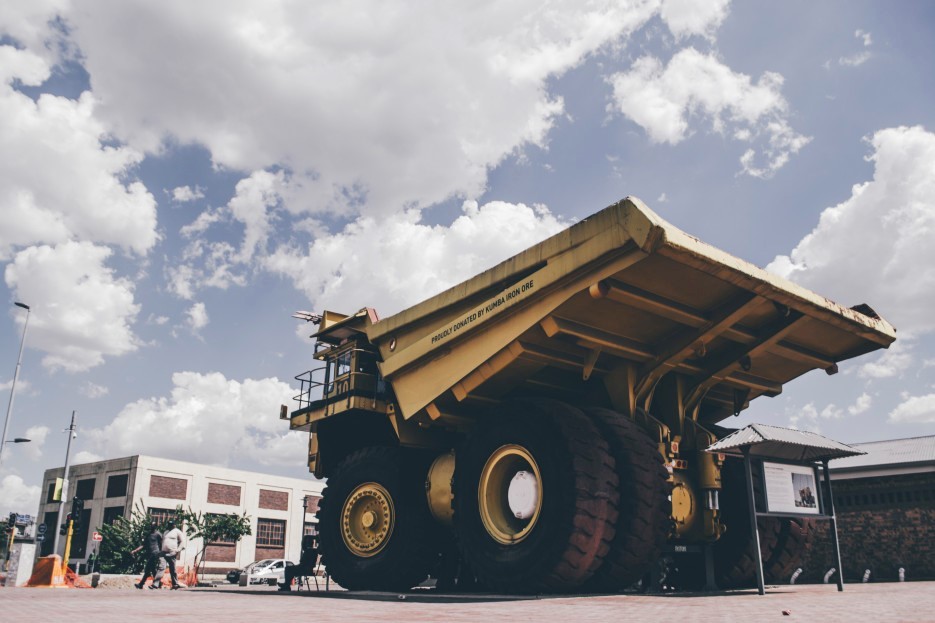 Forming part of an urban renewal project in 2012 in the South-Western Improvement District of Johannesburg, local businesses — mainly mining houses — decided it was time to renew the city by bringing a bit of history to the people. A reminder of Johannesburg’s mining past, the Unit Rig Mark 36 truck took six days to transport and had to be dismantled into three in order to make its way from the Northern Cape and onto the intersection of Ntemi Piliso, Hall and Usher street in central Johannesburg. Following its decommission after 20 years of service in the Kumba Iron Ore Shishen mine, the 125-tonne haul truck was donated as a public sculpture and now forms part of the Mining Street Museum.

One of the most photographed pieces of ornamental sculptures in the city, the Impala Stampede is situated in the Mining District’s open air museum. It was originally located in the Oppenheimer Park between President and Joubert street but was vandalised at the height of the Oppenheimer’s unpopularity in South Africa. Initially, sections of the statue were stolen for scrap metal till the whole statue was removed from the park. Sculpted by Herman Wald in 1960, the sculpture was restored by his son Michael Wald and reinstalled in the Mining District on Main Street in 2002. 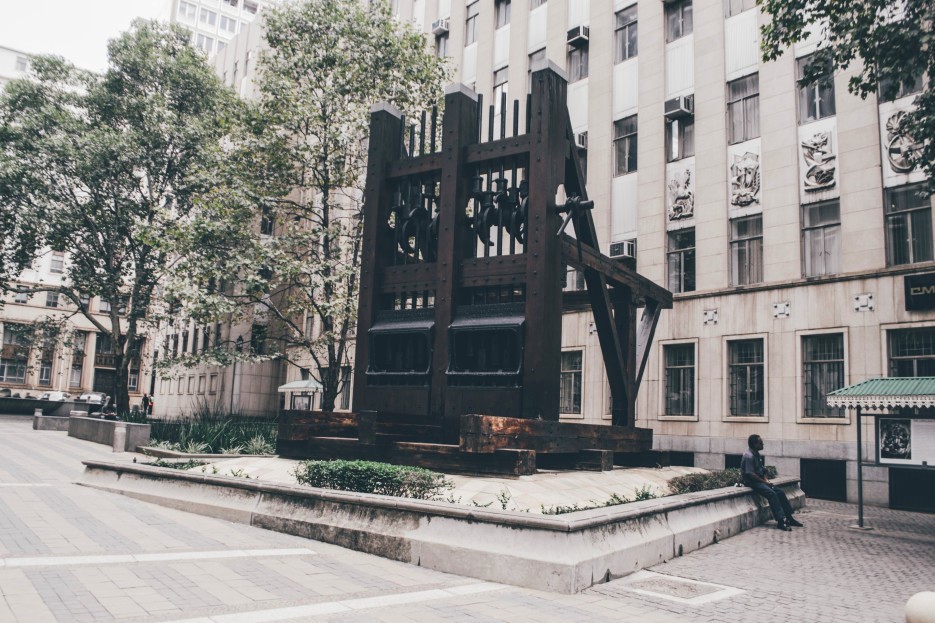 Used during the gold rush to crush gold bearing rocks, this public artwork is one of the oldest surviving stamp mills. It was used for the first time in September 1886 at the Robinson mine in Langlaagte. In 1912, mine owner Sir Joseph Robinson instructed that the mill be buried in the deep slime dams on the mining property. And to ensure his instructions were met, Joseph personally attended the mill’s burial.

Seventeen years after his death, mine management decided to excavate and restore the mill, an exercise that took six years and countless interviews until a mine worker who could identify the burial site was found. Having survived burial, the stamp was donated to the City Council and erected in the George Harrison Park where it endured vandalism and fires. In 2004, the stamp mill was restored and moved to the Main Street Mall. 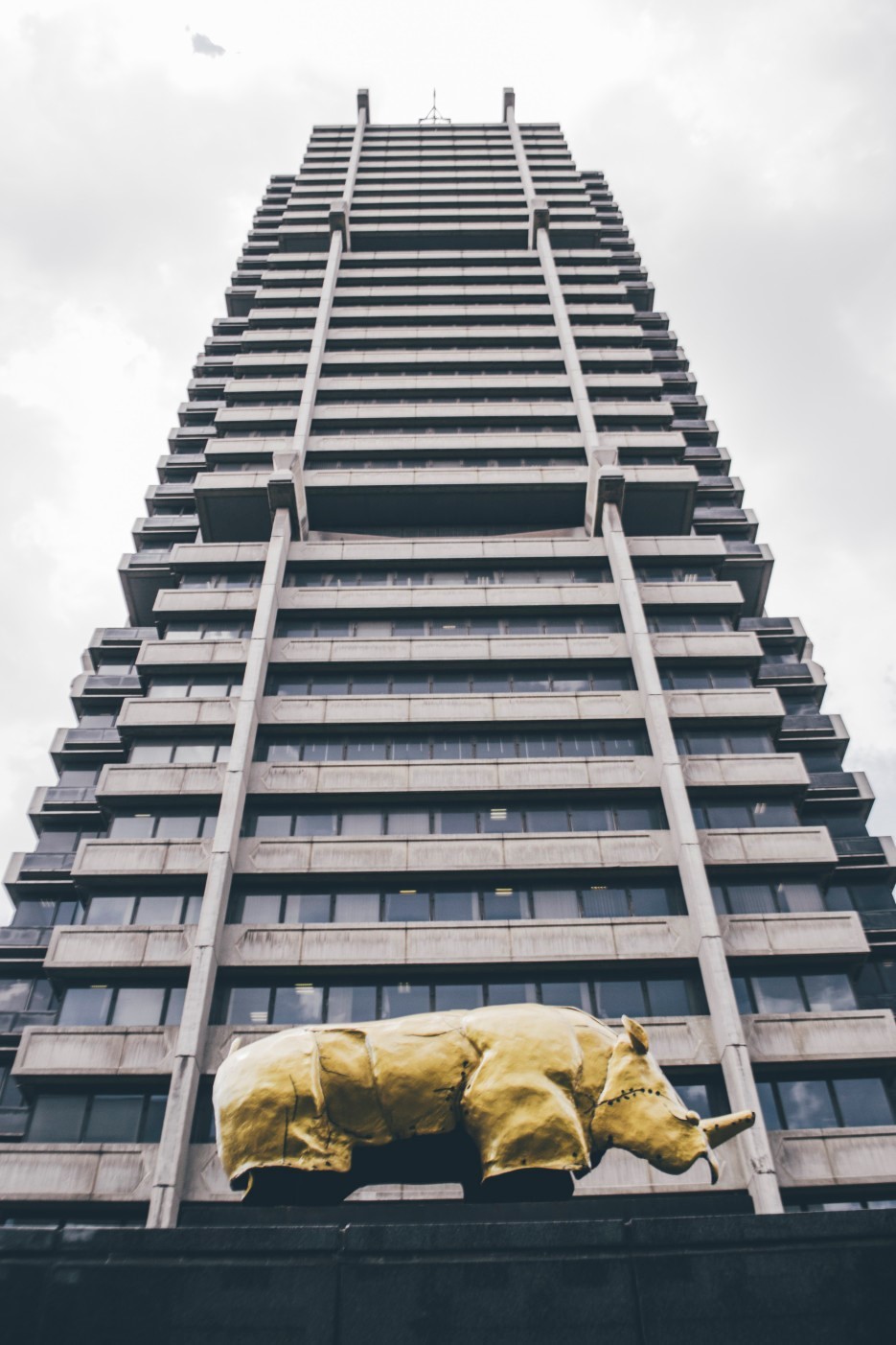 This is a replica of one of South Africa’s archaeological treasures, the golden rhinoceros of Mapungubwe. The statue stands on a pedestal in the Main Street Mall where it pays homage to one of the world’s most ancient civilizations, the Kingdom of Mapungubwe and its pre-colonial mining history.

Unlike the original Golden rhino (on loan to the British Museum) made of gold sheets, the replicate is a metre tall and made from fibreglass. The statue was brought into the city as a tribute and to raise awareness about South Africa’s first gold explorers, the people of Mapungubwe. Mapungubwe was one of the largest kingdoms in Southern Africa at the time and served as a trade hub for gold and ivory during the 13th century.

Tribute to Walter and Albertina Sisulu by Marina Walsh 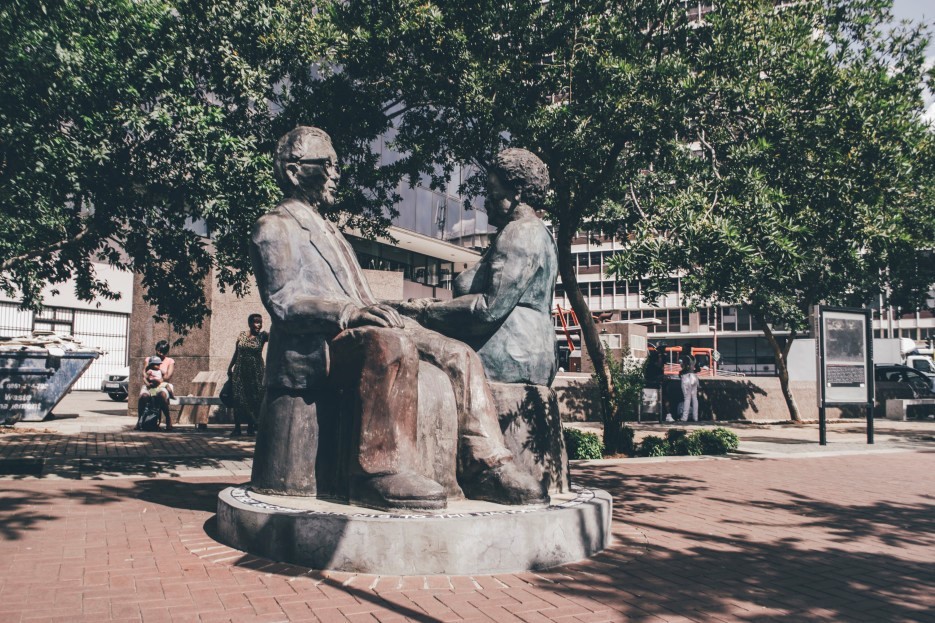 Affectionally known as “parents of the nation”, Marina Walsh’s statues of Albertina and Walter Sisulu, honours one of South Africa’s most prominent love stories. Commissioned in 2009 by the Johannesburg Development Agency, the two-metre high seated sculptures show an elderly couple sitting hand in hand, smiling and gazing lovingly at each other.

Located on the intersection of Diagonal, Market and Ntemi Piliso Street, the concrete artworks are situated near the late Walter Sisulu’s old offices, where he worked as an estate agent. To encourage interaction from passers-by, the sculpture was created in a way that allows for children, who were adored by the Sisulus, to sit on the laps of the anti-apartheid activists.

Where: Corner Ameshoff and Bertha street

Weighing 20 tonnes, it’s pretty hard to miss Clive van der Berg’s enormous concrete and metal Eland sculpture driving into Braamfontein. Celebrating a decade since its installation on 18 August, it reveals how the eland has crept into Johannesburg’s iconography. Acting as a gateway between the suburbs and the city, the concrete and steel structure merges the eclecticness of the urban jungle with South Africa’s rich botanical history. Intersecting the cultural and environmental, the grooves on the eland are filled with indigenous plant and shrubbery, aimed to eventually cloak the 5.5m sculpture as they grow, ensuring that the sculpture, just like the city, is ever evolving.

Where: Sauer and Simmonds street

In collaboration with Gerhard Marx (who also co-created Paper Pigeons), multidisciplinary artist William Kentridge produced one of the city’s most prolific public art pieces in 2009, located near one of Johannesburg’s busiest transport hubs and marketplaces, Bree Taxi Rank. At close range, the fragmented pieces of steel appear to be a jigsaw puzzle of sorts but when viewed at a distance, you realise it’s a woman figure carrying an imbawula. Measuring an outstanding 10 metres, the structure pays homage to hawkers and traders of Joburg, like the women in and around the city who braai mealie cobs and peanuts on their improvised braziers.

All images by Kgomotso Neto