Written by Nikki Zakkas on Sep 18, 2017 in Lists, Photography

Instagram’s nudity policy for content — although put in place to protect users from pornography and abuse — often places restraint on artistic expression. This is especially true when it comes to the platform’s not-so nuanced outlawing of nudity. “Don’t spam people or post nudity,” they say.

To challenge these boundaries of online censorship we ask 12 South African creatives to share the stories behind their banned images. These submission-based photographs vary from nude selfies to fine-art portraiture, and all have one thing in common — they were removed from Instagram for breaching its Community Guidelines.

On Instagram’s censoring policy: Instagram is a popular platform and it’s saddening to see nudity be viewed as taboo. I’ve found that it isn’t exactly the space I seek for that sort of artistic expression. I prefer Tumblr or Behance, as the response I’ve gotten on those platforms has been directed towards the creative nature of the imagery as opposed to general creepiness that pops up on Instagram. — Gabriella 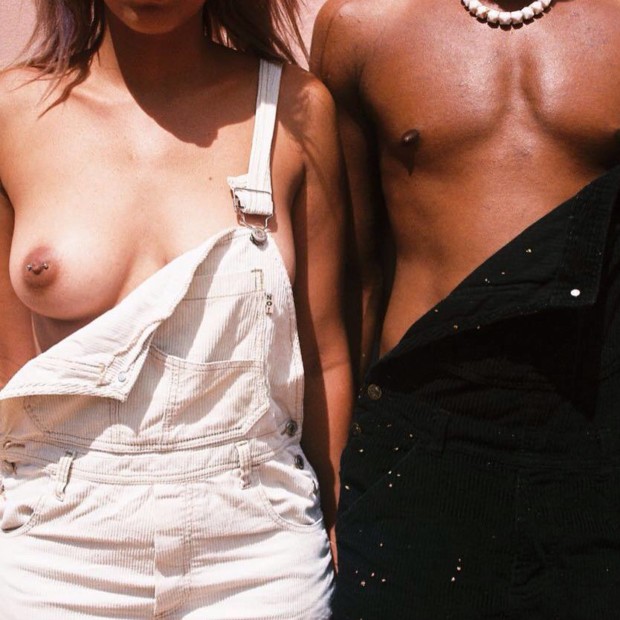 This photograph was taken by Lara Simon in the backyard of our house in Woodstock with her sister Erin.
The backstory: I was out at night club the Waiting Room wearing the black dungarees pictured. I bumped into Lara and she recalled that her sister, Erin, had a similar pair in white. We decided that we should do a photoshoot because why the fuck not? We took a whole bunch of photos in various stages of undress. This ended up being one of the strongest that encapsulated the double standard of public gender presentation. Male-presenting bodies are more accepted than female-presenting bodies in the public domain, which is boring cisheteropatriarchal bullshit. Like, it’s just a nipple.
On Instagram’s censoring policy: This kind of superficial censorship is indicative of a broader culture of body-negativity. It’s really a bio-political statement of control saying, ‘if you are a woman and/or feminine presenting, you do not have control over how your image is portrayed and projected into the world’. That’s fucking sinister. — Kopano

This photograph was taken by my friend Cassandra Heystek in her bedroom. We were getting ready for a night out. While trying on outfits, I came to love the look of this sheer shirt without a bra but decided not to wear it. I was not ready to put myself in an uncomfortable position where I could get dirty looks. Instead we took a photo so that we can treasure it in our photo albums. — Jessica

This photograph was a test shot to see if settings and lighting were correct. These images formed a part of a series on African spiritual identity for a show that took place at AGOG Gallery in Joburg. I happened to post it on Instagram and my account was suspended. Ironically the image had so many likes and positive comments. — Thina 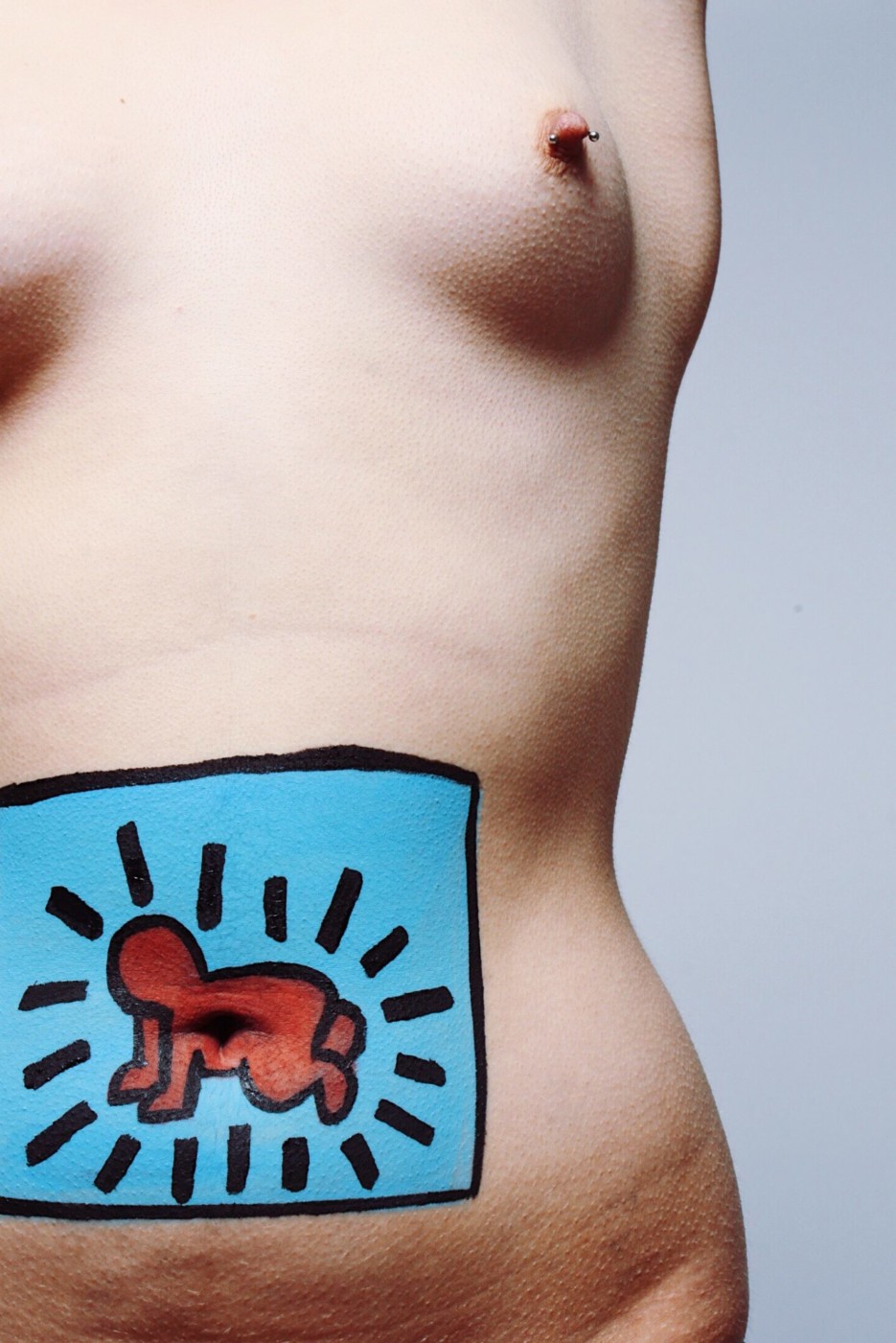 Title of the photo: The Transience of Graffiti
Can you me about this photograph? The use of the human body as a canvas is a metaphor for the surfaces on which graffiti is usually applied to. This photo was reported and deleted on Instagram within an hour of me posting, for containing the ever-so-dangerous female nipple. — Jemma 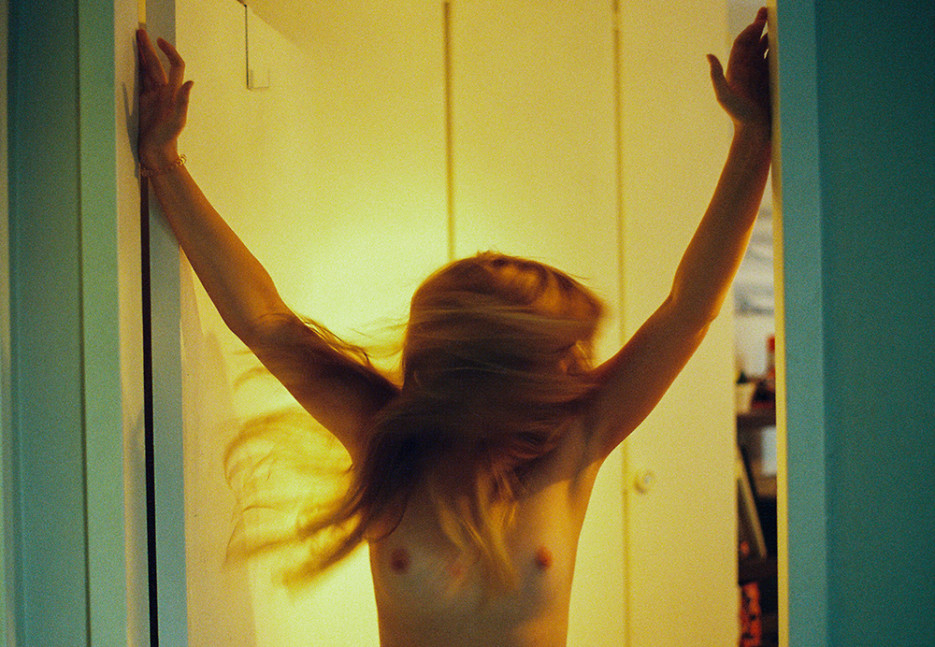 Why does this photo hold meaning to you? It was the first time that I felt I had expressed and conveyed something in me. This was something that I had been meaning to do for a while by making images with real people, with real emotions, on a piece of celluloid film. No fake smiles. No false intentions. No obscuration. — Willem 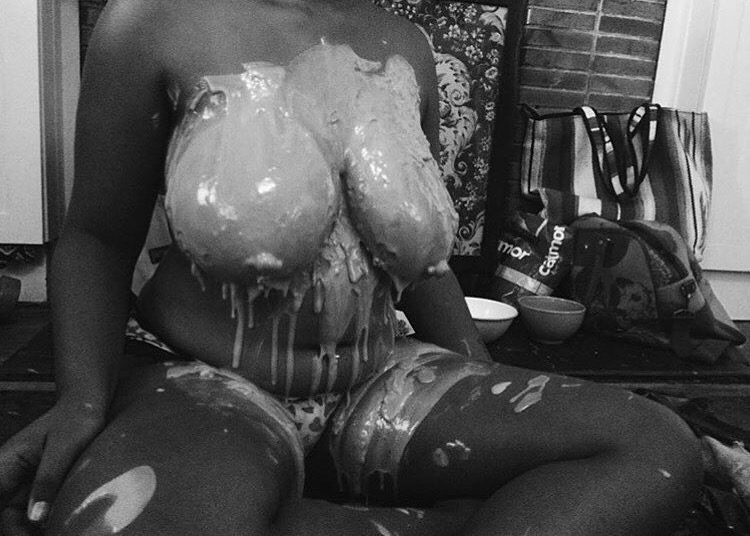 On Instagram’s censoring policy: It is a system of control. It represents all the institutions that thrive on access to things they have absolutely nothing to do with. When I reclaim my body and set it up to heal autonomously without the regulation of the gaze, it is seen as offensive. It is hurtful because the black female body is only ever accepted when it’s for consumption, never to serve a greater purpose. — Nandi 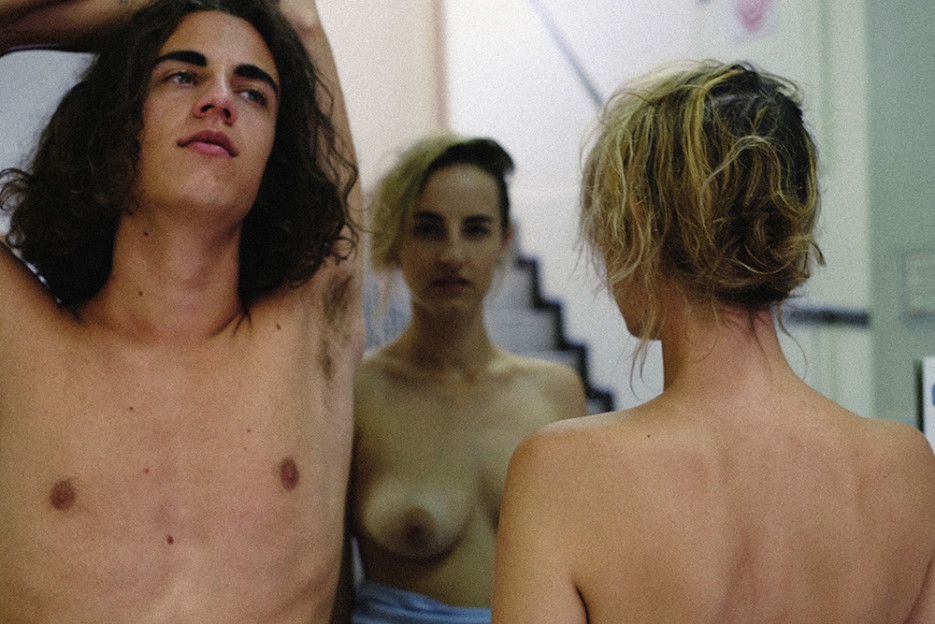 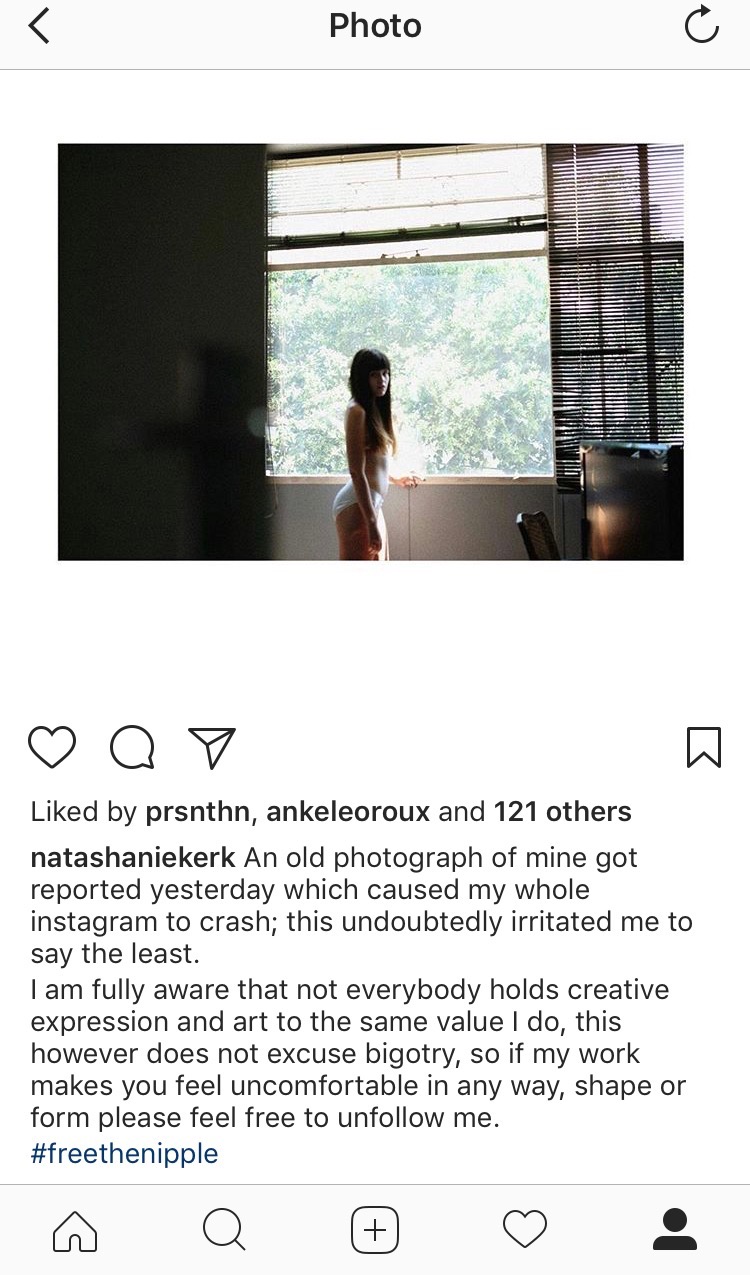 On Instagram’s censoring policy: Art critic John Berger pointed out that photography has taken over from traditional oil in objectifying the nude. For Berger, to be naked is to be oneself. To be nude is to be seen naked by others and yet not recognised for oneself. People like to dress up censorship and give it new names. There is however another way of looking at it; my pictures keep on getting flagged (I keep on reposting them), which means that I am making people feel uncomfortable. I am taking ownership of the gaze that I have inherited. — Natasha

Can you tell me about this photograph? I created this image because I felt that female body parts are so easily shown to the public while a male’s genitals are often hidden, even in nude scenes in films. All you ever see is a butt and I guess I wanted to break that taboo. — Marcia 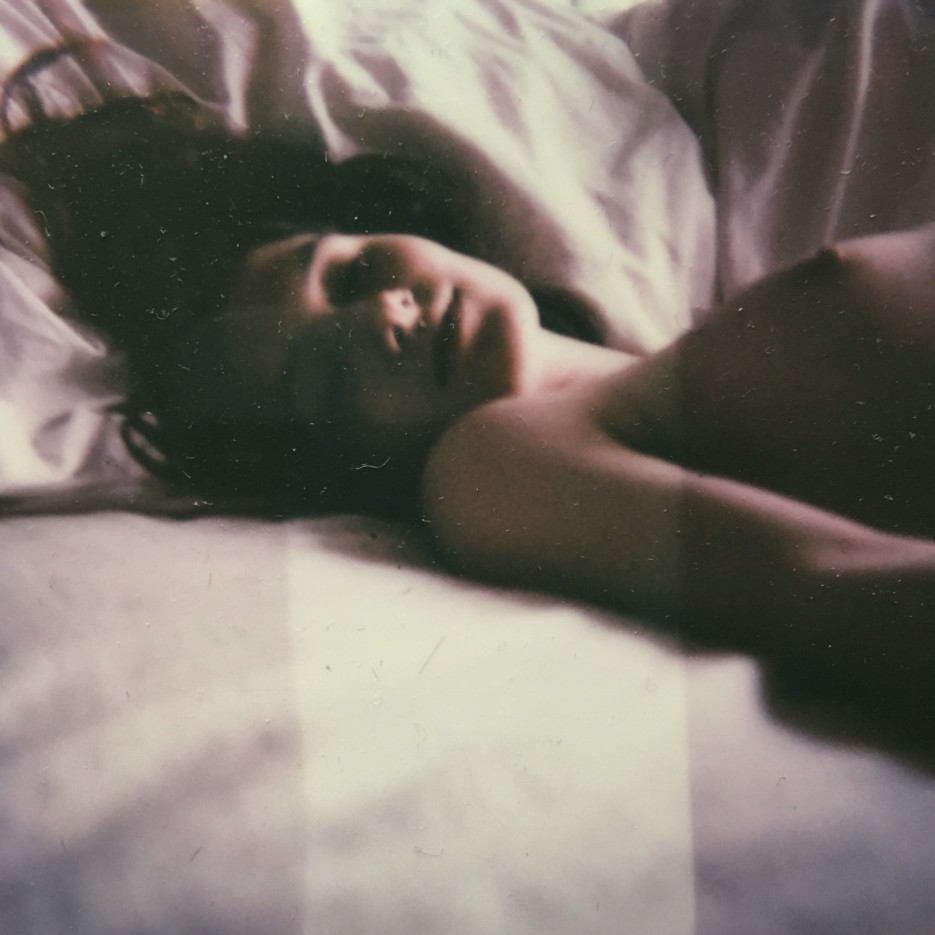 This photograph was taken in the first nest that my partner and I had built for ourselves and there is so much intimacy and closeness here.
On Instagram’s policy on nudity: I understand the need for certain guidelines but what is regarded as appropriate is purely subjective and based heavily on gender. People are quick to report something they don’t understand or agree with. — Jessica 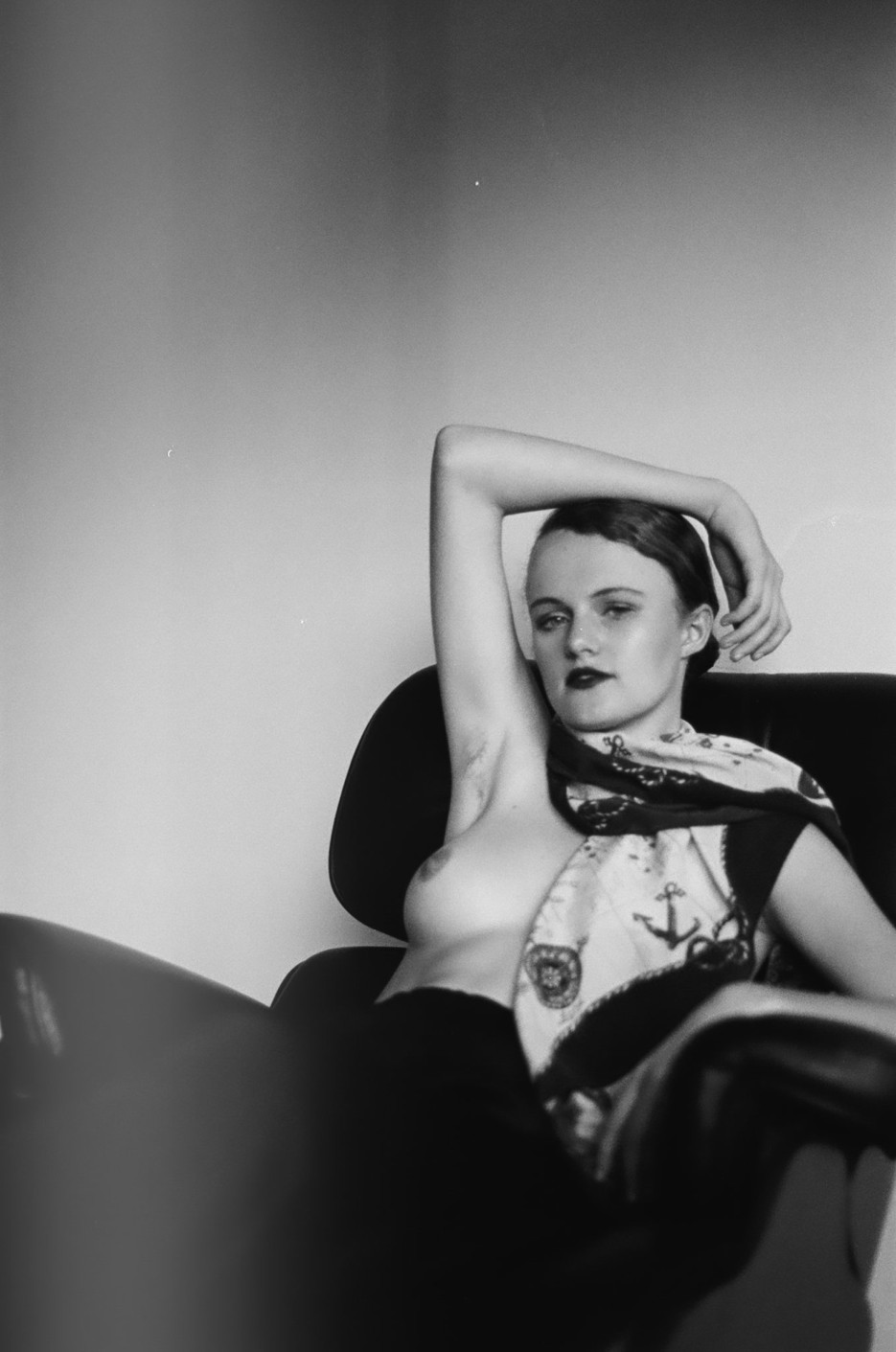 Can you tell me about this photograph? It’s of my roommate Gemma. We have become close in the nine months that we’ve been living together. This image is not intended to be sexualised but rather show the beauty that I see in Gem.
On Instagram’s community guidelines: It’s bullshit because it maintains the idea that the female body is an object to look at solely in a sexual way. Breasts are used as advertisements but not tolerated as an expression of freedom. Any person’s body, sexuality, and expression of that belongs to them and only them. — Afrah 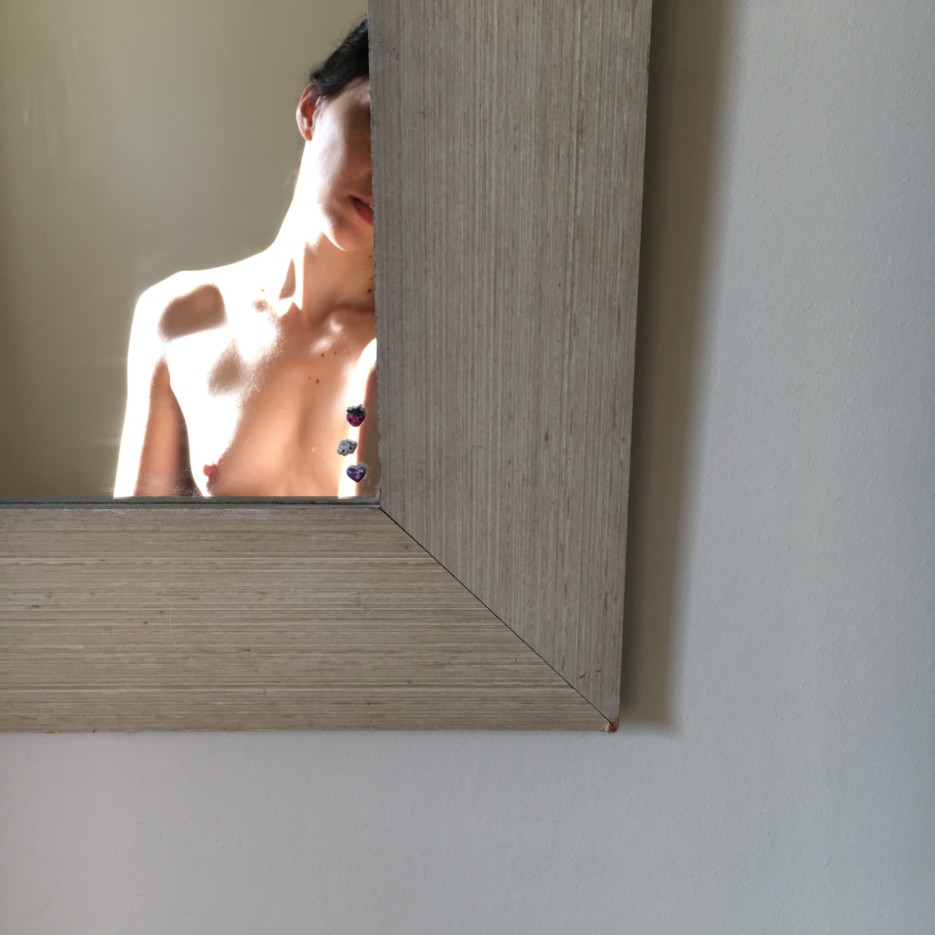 Tell me about this photograph? I took this last year on my last day of being 31. I’d posted a similar photo on Instagram exactly a year before and I guess I liked the symbolism of that, the capturing of a last moment in a cycle around the sun, something still and simple in all that transience. I’ve posted significantly more eyebrow-raising images before and never had anything removed. Plus, the spirit that this was taken and posted in was so non-provocative that it just seemed impossible that someone could decide it was offensive. Wrong. It was up for an hour or two before Instagram took it down. — Annie