Across the country, artists everywhere have used their various mediums to honour and pay tribute to their heroes, idols and inspirational figures.

To commemorate the recent 40th anniversary of the death of South African anti-apartheid activist Steve Biko, we spoke to five artists about their work depicting Biko and talk to them about what the activist means to them. Stephen Bantu Biko, one of the founders of the South African Student Organisation and at the forefront of the Black Consciousness Movement, died on 12 September 1977 under police custody in Pretoria.

These artworks add to the collective artistic tributes dedicated to the iconic leader.

This gif was created by graphic designer Sean Dalasile and creative director Keza Gatari of Joburg-based agency SoulProviders Collective, which describes itself as “a group of gifted writers, designers and thinkers who are passionate about African storytelling. We build and nurture online communities for a range of global, South African and pan-African brands. We aim to create work that shifts perceptions.”

Can you share the story behind this gif?
Keza: We created the gif not only to commemorate Steve Biko’s death but to visually echo the importance of Steve Biko’s ideology. When I think of what Steve Biko stood for I’m inspired and yet disappointed. After 40 years, the four points we highlight in the gif still need to be attained in this country. We have work to do.

What influenced this artwork?
Sean: I am inspired by Biko’s philosophies and teachings. Being a Black creative in an industry that’s so divided is hard, so I’m grateful to be in a place where my creativity is not limited. We Black creatives have always been doubted because of our talents, being victims of double standards and discrimination. These are barriers we still need to overcome.

Thabiso Moledi is a self-taught visual artist, born and raised in the Vaal. 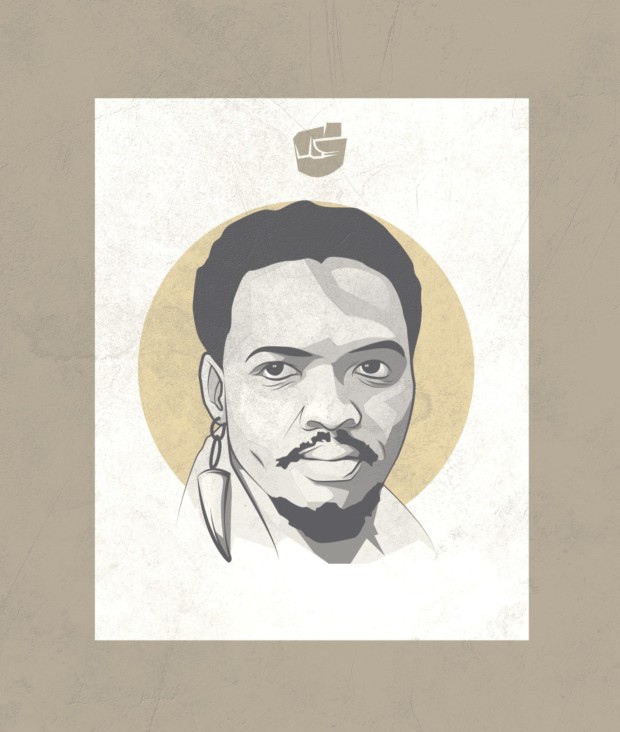 Can you tell us about your illustration?
The Biko piece forms part of my #Natives illustration series, which features prominent African icons and is all about celebrating Africanness and blackness. This illustration serves to pay tribute and respect to Biko’s work towards ensuring liberation and a bright future for all of Africa.
What does Biko mean to you?
The name Biko is synonymous with the word “hero”. His name holds so much power because of who he was and what he represented and stood for.

Vivien Budge is an artist, a lecturer at Wits and self-describes as a “maths fundi”. 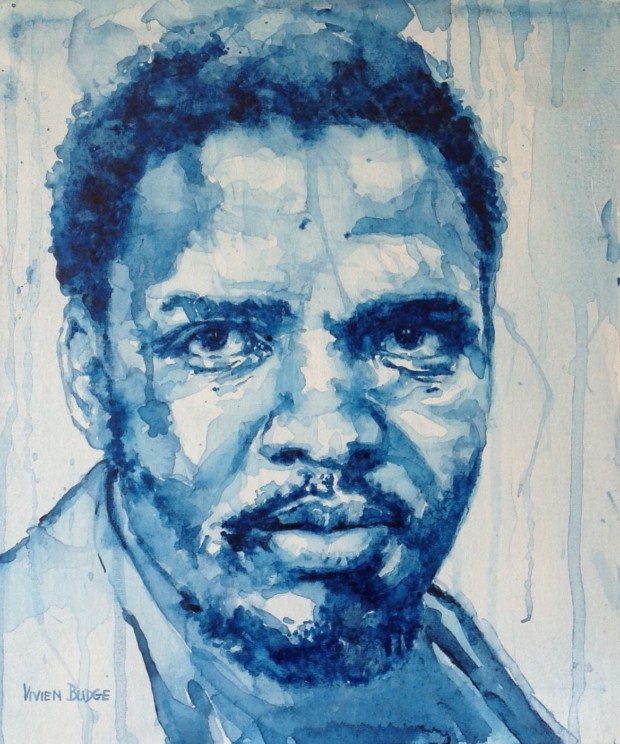 What inspired the piece?
Recently I’ve been listening to debates around the topics of white privilege and colonialism. For me, it’s highlighted that no South Africa can afford to dismiss the fact that racism has been and still is, a brutal reality — with significant consequences for many living here today. Old ideas around race continue to marginalise people and Biko saw that people have to be in a position where they own their dignity and are allowed to take responsibility for their own creativity and way of life.

Tell me a bit about the piece?
I hoped to capture something of his adamant, confronting strength in his beliefs; but also some sense of vulnerability and the awfulness of his death. Because he died before his time we can only be aware of a haunting sense of loss – we will not ever really know the man who was murdered for his thinking.

Kent Lingeveldt is the founder of Alpha Longboards, a Cape Town longboard agency, and described as a “local skate legend, photographer and scene shaper”. 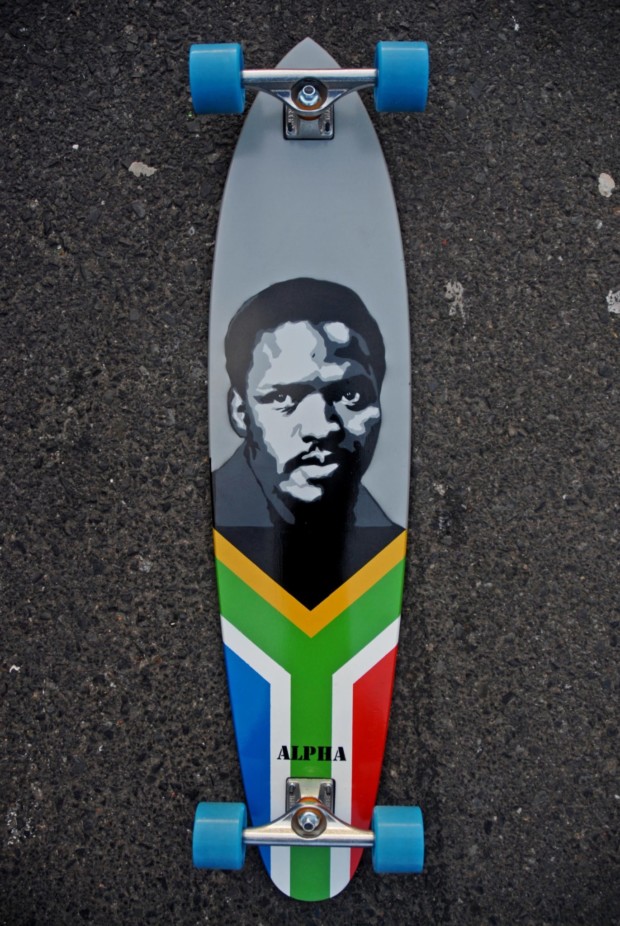 “Growing up in Mitchell’s Plain, I saw graffiti around me daily,” says Kent. “Skateboarding also took me into the city centre a lot, which exposed me to different people, music and art. So for me it’s a big thing to be able to add artwork to the boards; it brings these two worlds together.”

What inspired the piece?
I feel now more than ever, we need to focus on what leaders like Steve Biko stood for and what he represented, and also why he felt that our country and our people were a worthy cause to devote his life to.

Can you tell us about this board?
This piece is a part of one of our art board series, The Local Legends., which features icons like Nelson Mandela and Miriam Makeba. When an acquaintance asked me to create a board with Steve Biko on it, I jumped at the opportunity. It is also the first time I created an image and combined it with the South African national flag. Incorporating the flag into the artwork alongside his image will hopefully also remind us about the great country we can become with proper leadership.

Lungile Mbokane is a Joburg-born graphic designer whose unique collage-style digital work has won him a place as a finalist on the SA Taxi Award 2016 Top 30. 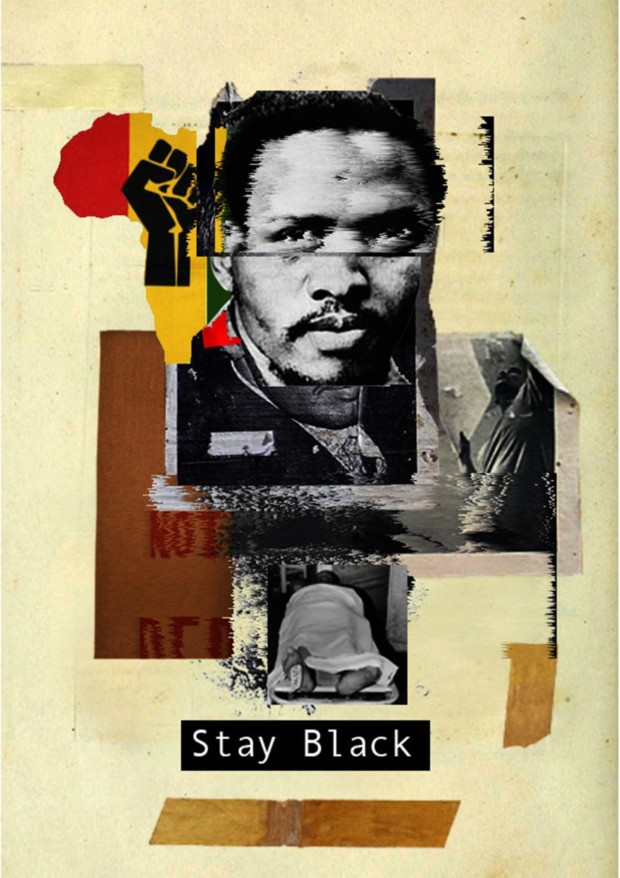 What does Biko mean to you?
To me, Biko is liberation. He changed my mindset through stressing the issues of psychological freedom, something we as a Black society still battle with today.