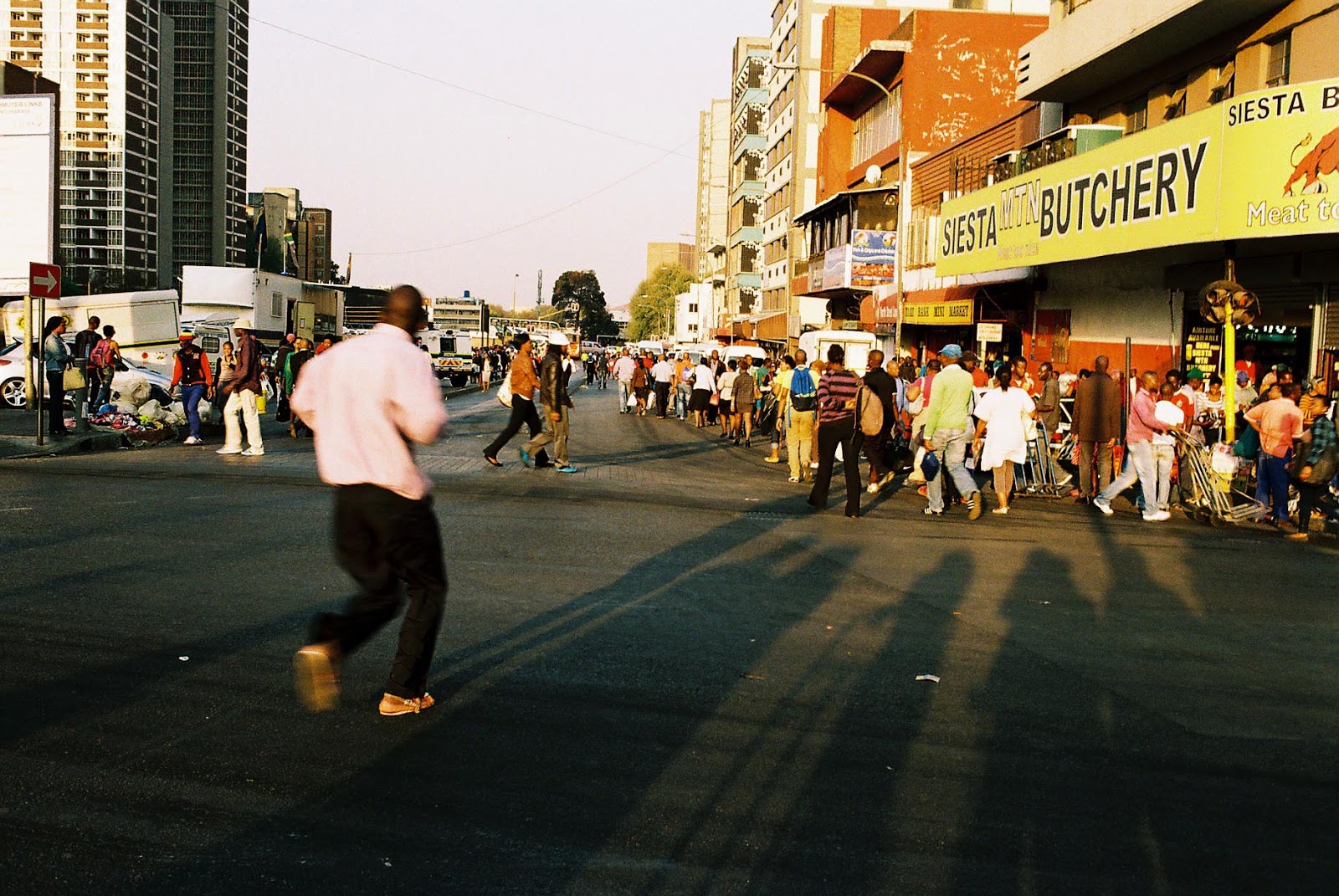 18 Oct Love letters to Joburg: Creative residents pay tribute to the city in words and photos

We reach out to five home-grown artists, writers and photographers to tell a tale about Africa’s most visited city, Johannesburg. Mosa Mahlaba, Mark Lewis, Tanya Zack, Madoda Mkhobeni and Shaun Gaylard embrace Johannesburg’s uncontrollability and take comfort in its chaos, using its streets as inspiration to carve out captivating stories. Some are poetic, some photographic and some illustrated.

The below extract is from urban planner Tanya Zack and photographer Mark Lewis’s forthcoming book Wake Up This Is Joburg, in which the pair explore Jeppestown’s cross border shopping hub. 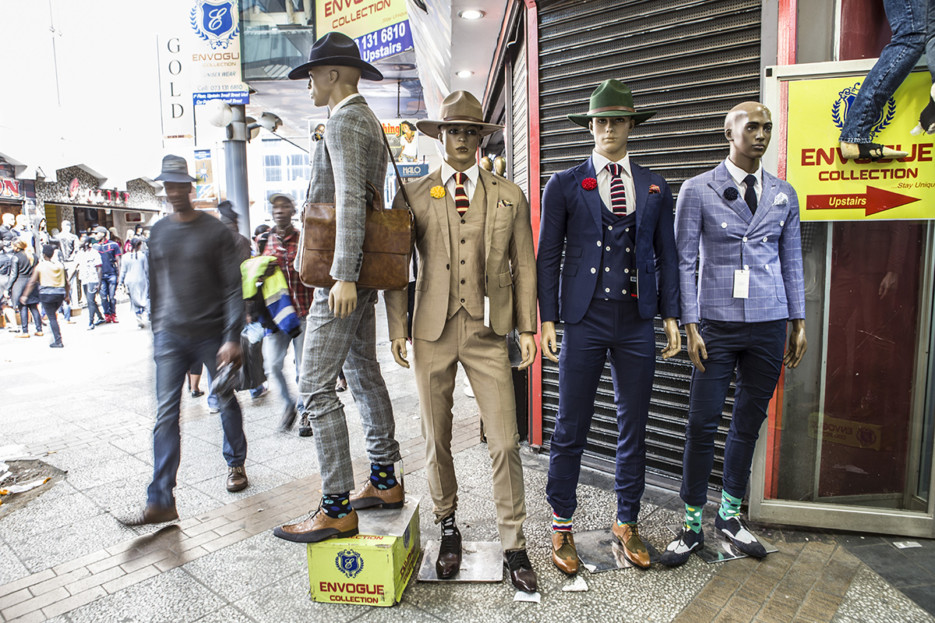 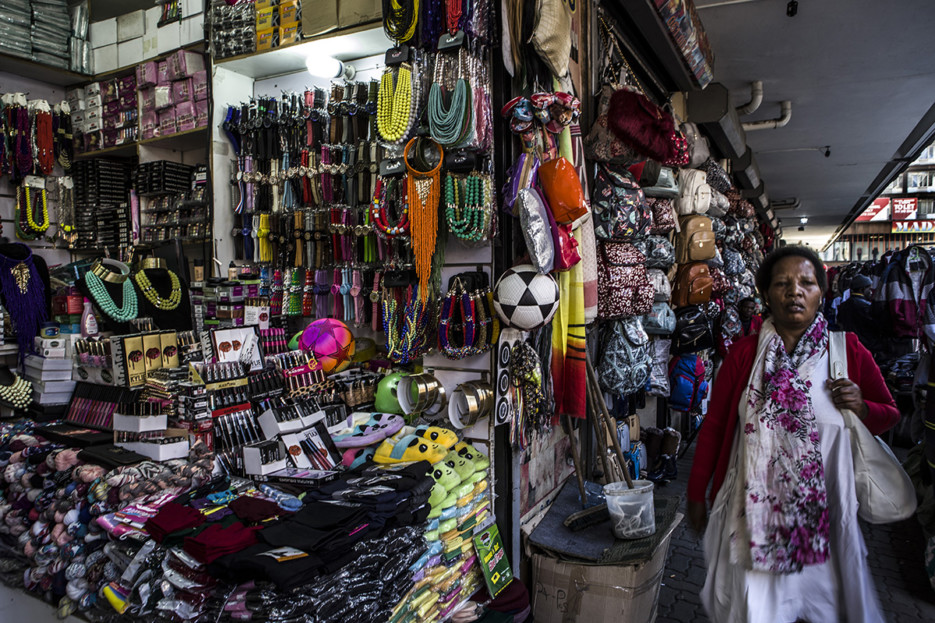 “Jeppe has moods. On a day when roller shutters are clamped down and everyone has a skittish look, there is an oppressive sullenness, the promise of a bargain or of a sale sucked out of the boomboxes…But when it is month-end, and no police raid is expected; then Jeppe bursts at its seams! The bright coloured clothes that spill out of cupboard-sized shops are destined for all parts of Africa and local hawkers and cross-border traders from DRC, Tanzania, Mozambique, Zimbabwe, Zambia and elsewhere shop with single-minded determination for jeans, dresses, jackets and shirts, handbags, or for plastic home-ware, blankets or small household goods ranging from locks, nail clippers or rat poison to socks, facecloths and clothes pegs.

On such a day I try a new route into this so-called ‘Ethiopian quarter’ because Solomon has told me ‘You can only understand Jeppe if you understand Small Street’. He laughingly presented it as ‘the big brother of ‘Jeppe’.

In every shop customers are choosing and buying. Shops are so busy that staff members are now funelling people in a one-way system in and out of the door. I enter a shop and scan the crude price tags: jackets for R50, cardigans for R24, leggings for R5, blouses for R14.

I head to stalls that back onto the Jeppe Street post office. The calls from this tight row of stalls lit by fluorescent lights are more aggressive than along the rest of the street. At first I don’t see anything I want to buy here, but then I spot it and without even thinking to negotiate for a lower price I hand over R70 for a Black t-shirt with psychedelic coloured writing emblazoned across the front: ‘No one in my city has swagger like me.'”

Soweto-born analogue photographer Madoda Mkhobeni‘s oeuvre comprises Johannesburg’s city center. Below, he reflects on two portraits taken in 2010, which honor the unsung work of the residents who sort and recycle tons of the city’s waste. 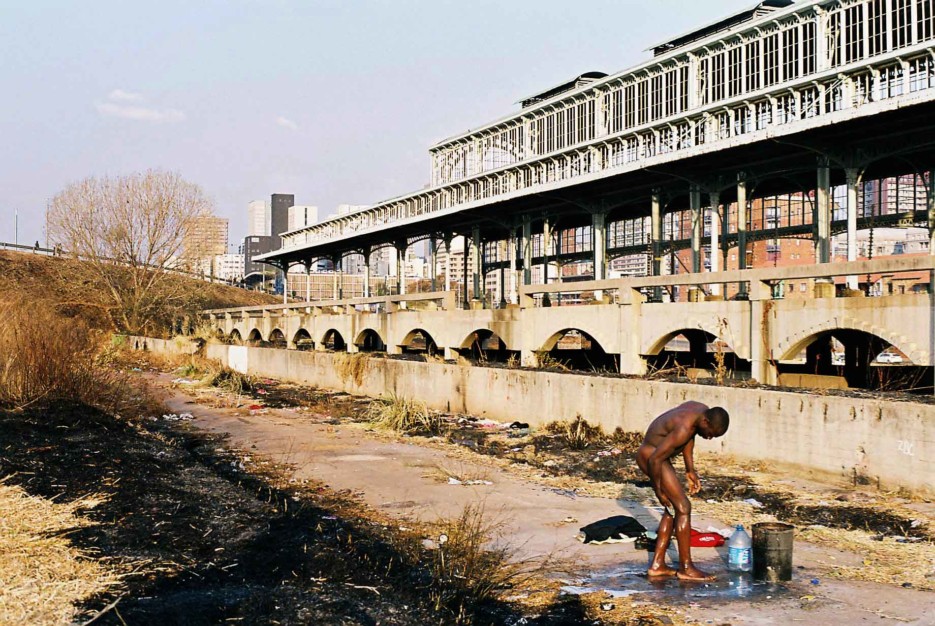 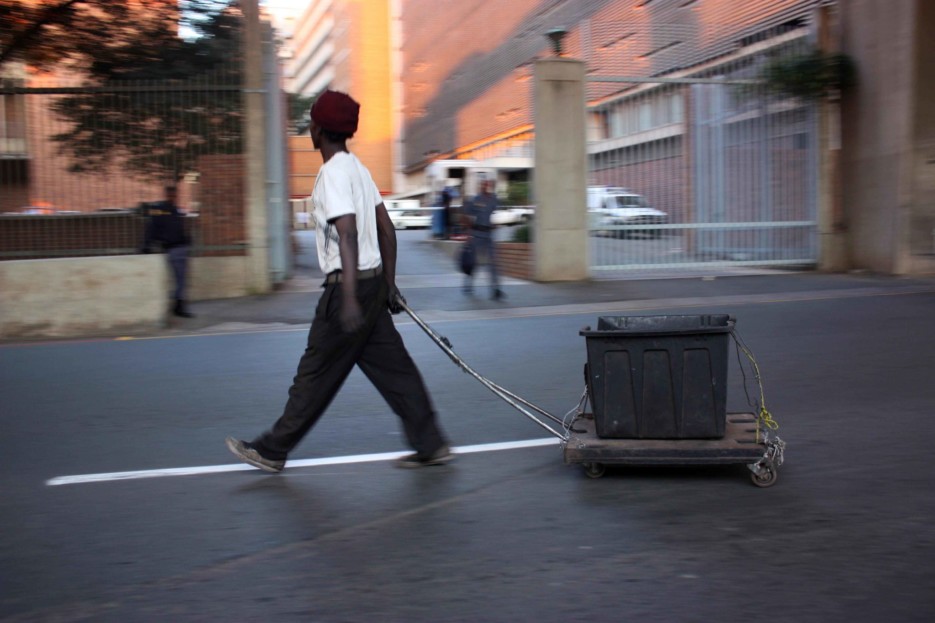 “While walking and shooting, I was introduced to the trolley pullers living by Bree Taxi Rank. They sort and sell recyclable material, which they collect in the northern suburbs. In 2010 I spent time documenting them to the extent that I became like a family member to them. While documenting them, I realised I was dealing with people living with a hidden identity in our society. People who left their families with a plan to look for jobs in Johannesburg. Unfortunately they ended up collecting recyclable material and living on the outskirt of the city center. Sometimes they would asked me for a portrait in a beautiful building or busy street intersection to send home with a letter and money.

One day I found one of the collectors, Jito taking a bath. It was a hot, sunny day. Jito asked me to take a photograph of him while he was bathing. I checked my camera settings and struck the first frame.

After few days I printed the photograph and rushed to the recycle space to give it to Jito. When I got there I found his friends. I asked them, ‘Where is Jito?’. They said, ‘We are sad to tell you that Jito passed away. He was stabbed with a knife in town and taken to hospital where he lost his life. No one knows where in Zimbabwe he came from. We all met here in Joburg’.

I documented that community until the Newtown flats and Newtown Mall Development closed the space where they were living and stopped their freedom to work with recyclable material.”

Mosa is a copywriter and author of children’s book Searching for the Spirit of Spring. Here, she shares a poem titled Misunderstood, which she wrote about her home city Johannesburg exclusively for 10and5. 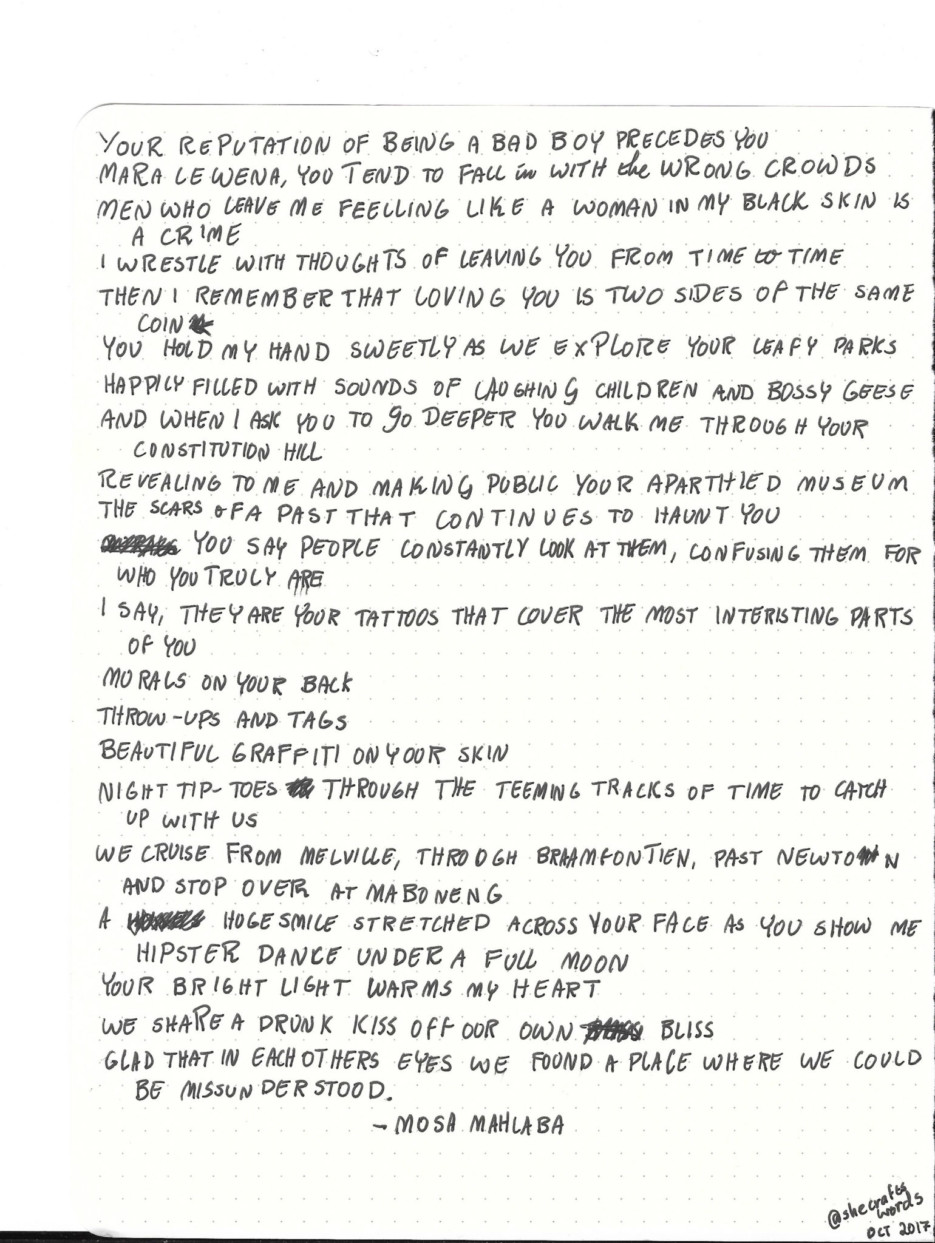 Architect, designer and artist Shaun Gaylard specialises in capturing the architectural fabric of cities through hand drawn architectural illustrations.”The city is robust in the face of unremitting challenges, which are often encountered only by either a first or third world cities but seldom both. I am always astonished at how dynamic the city remains as it adapts to the ever-evolving requirements and standards set by its residents,” says Shaun and shares his love for the city as he illustrates two of Johannesburg’s skyline pointers. 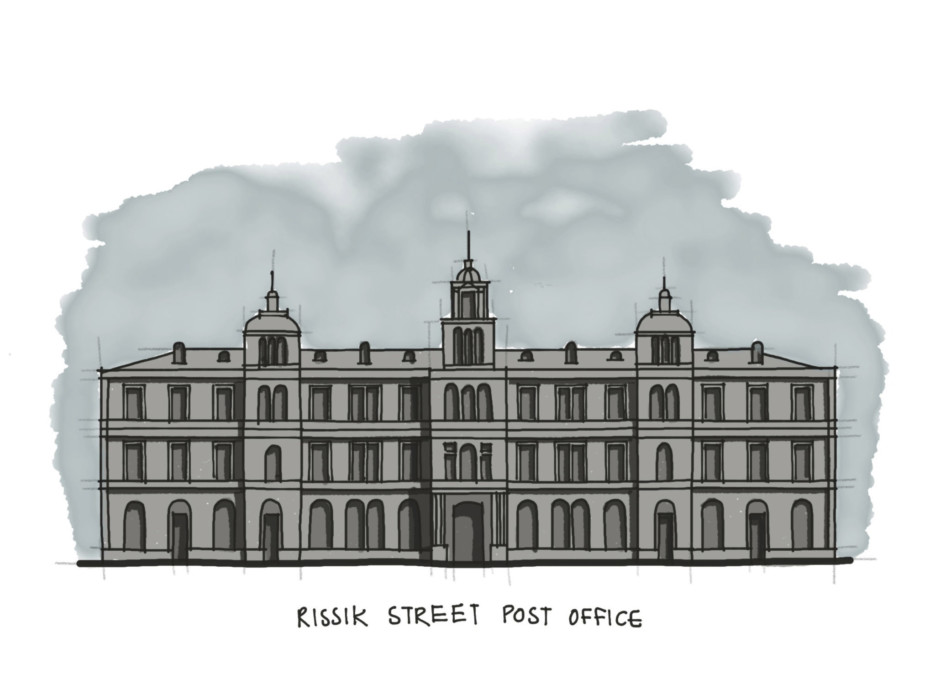 “Rissik Street Post Office, built in 1897, was at one stage Joburg’s tallest building. The building is a symbol of one of the country’s infrastructure backbones.” 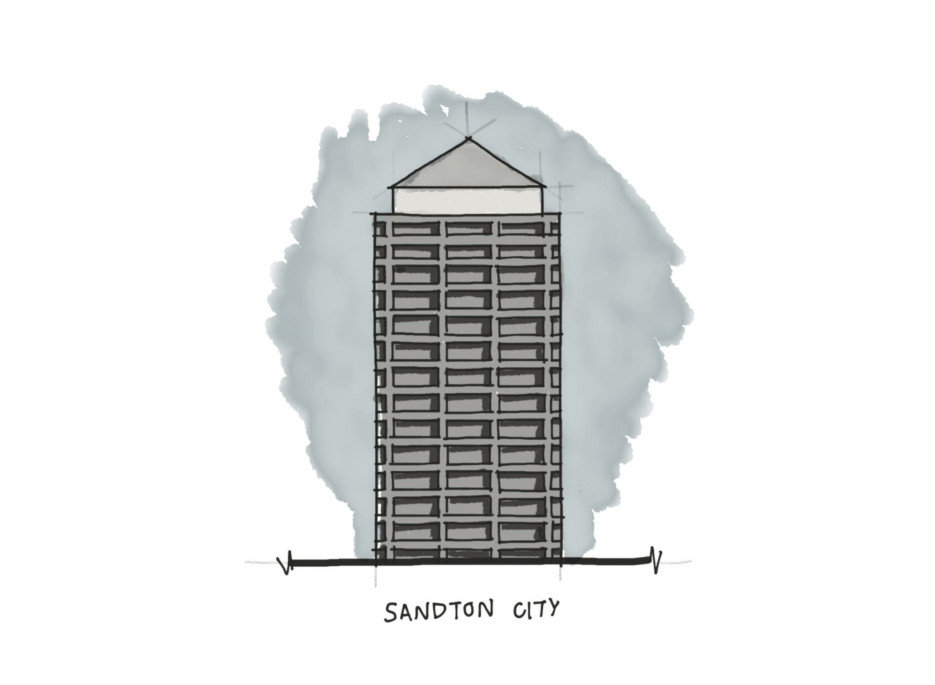 “Sandton City, built in 1973, was at one stage also one of Joburg’s tallest buildings. Built out of the CBD, the entire complex revolutionised how South Africans would shop.”

Love letter, Wake Up This Is Joburg