It’s a foodie rave. A music showcase in a forest. A posh camping party. A private bash, where everything is laid on. A string of magical theatre sets. A fantasy store. A fashion parade. Welcome to the world’s first everything-included, 24-hour festival, which takes place in the Western Cape. And where time-starved tastemakers come to see which way the creative winds are blowing.

“I am inspired by people. The best thing about a festival should always be the people,” says Georgia Black, who founded the festival three years ago. “But there can’t be too many people, or it’s just not possible to deliver something that’s highly creative and alternative.”

Littlegig is in some ways a backlash against the rise of (increasingly urbane) mega-festivals, most of which are owned by a handful of promoters. For this reason, Georgia and her small team have capped the number of people at the sellout event, to 1 500. At R2 300 per ticket, it’s not the cheapest party you’ll go to, but it’s the only one where you can eat food by a Top 10 chef, drink champagne and the best single malt whiskies, and shop at the ‘free store’ without taking out your wallet. 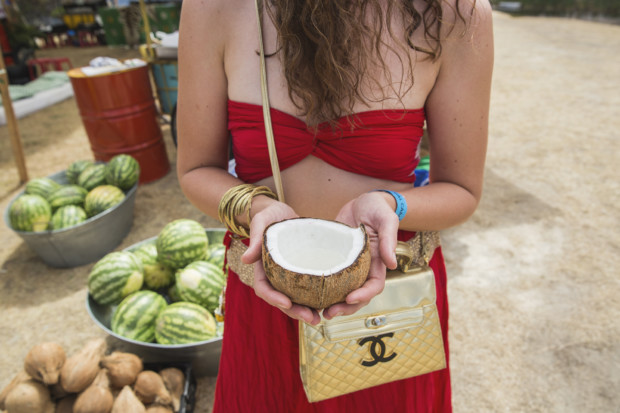 At the festival, there are a string of pop-up bars (with no queues) in fantastical locations, and food stations are dotted around the festival forest. For the real foodies there are two additional experiences, a Paired Food and Wine Tasting featuring 6 top women chefs and winemakers, and a six-course Chef’s Table Dinner for 50 guests by Eat Out Top 10 chef Arno Janse van Rensburg.

Fashion, art and design are integral to the 24-hour experience. Each area is designed by a top stylist, under the creative lead of Littlegig’s Bielle Bellingham, former Elle Decoration editor.

The Festival Fashion Concept Store — the only place at the festival where money changes hands — presents vintage and bespoke festival ranges by exciting local designers such as Marianne Fassler, Rich Mnisi, Neo Serati, David Brits for GOOD GOOD GOOD, Sheila Madge, Lukhanyo Mdingi, Ruff Tung and Dr Pachanga. Adjoining the store – and sharing its music lineup and free Krone champagne bar – is the Salon, with 12 top stylists and make-up artists who will transform guests, at no cost.

There are eight categories of camping and glamping, ranging from tents with blow-up mattresses to bell tents the size of a bedroom, with Egyptian cotton linen. For the 2018 event self-camping has been introduced for the first time, at no extra charge. And for those who would rather sleep in their own beds, there’s a taxi rank at the festival, which is just 40 minutes’ drive from Cape Town.

The third edition of Littlegig 2017 takes place on 17- 18 February 2018 in Stellenbosch. 24 hours of connection, creativity and convenience.