Cape Town-based multidisciplinary artist Athi-Patra Ruga this week released the trailer to his vivid and brilliantly shot film, which debuted at Performa in New York last year. The video is part of his upcoming exhibition Queens in Exile, and inspired by trans activist Sylvia Rivera’s autobiographic essay Queens in Exile.

Following his critically acclaimed exhibition Future White Woman of Azania Saga, the performance and visual artist returns to Cape Town’s WHATIFTHEWORLD Gallery at the end of November with Queens in Exile. Using utopia as a lens while revisiting history and its archives, Athi-Patra excavates collective memory and exclusionary national myth, and rebuilds both through an immersive body of work comprising film, photography, and petit point tapestry.

The exhibition places black womxn back into the archive, using detailed and nuanced storytelling to expand our understanding of their contributions to history. Hailing the names of Xhosa prophetess Nongqawuse, Queen Katyi WamaRharhabe and pop icon Brenda Fassie, Athi-Patra weaves together the tales of womxn; including those still alive, dead and mythological.

Check out the trailer for the film, directed by KOPE I FIGGINS, while Reverand Tiyo Soga’s Lizalis’ idinga Lakho hymn accompanies the visuals.

Queens in Exile opens at WHATIFTHEWORLD Gallery in Cape Town 29 November and runs until 27 January 2018. 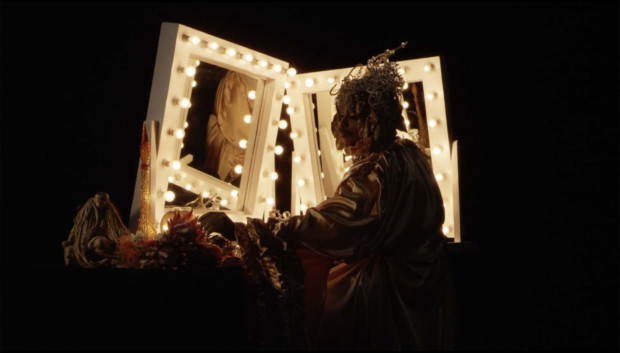