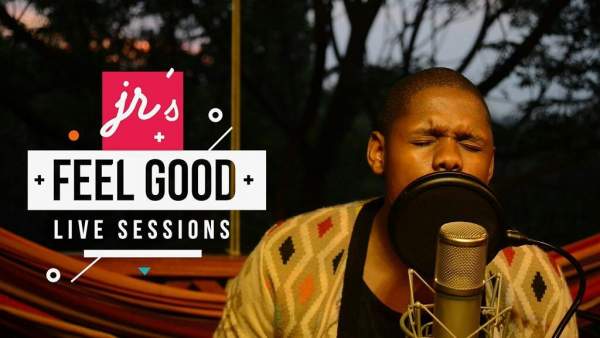 Posted at 09:00h in Music, Video by Tshepiso Mabula
0 Likes

The live music sessions present different musicians performing cover songs or their own originals to a live audience. Here’s some of the best moments from this online music experience.

Soweto-born singer and song writer Samkelo Lelethu Mdolomba aka Samthing Soweto takes the audience on a soulful, nostalgic journey as he revisits old classics and shares some of his new music on this episode. Samkelo starts off with a rendition of Lauren Wood’s old classic Fallen, which sets the perfect tone for the perfect heartfelt soul session. Samkelo, who was formerly with acapella group The Soil, started his solo career after leaving The Soil and now has a hit song titled Akanamali.

Popular rapper Kwesta is known for smash hits like Ngud’ and Spirit and is continually proving to be one the most covered South African hip hop artists. After winning eight SAMA awards in one night this year, Kwesta featured in episode six of the Feel Good Live Session. And uses this performance to create a balance between hip hop and soul. He strips down all his classic hits and gives viewers an honest rendition of each.

Afro-soul songstress Moneoa Moshesh, or just Moneoa, akes on episode 16 of the Feel Good Live Sessions and delivers a profound performance. She starts of with the funky Khuthi, which gets the crowd going. Moneoa whose name means “given” in Sesotho, was born in Umtata, raised in Durban, and sings some of her old classics like Ziphi Nkomo and More Than You in this live recording.

Feel Good sessions shows once again that music, when done right, knows no bounds. In episode five, rapper Sizwe “Reason” Moeketsi from Thembisa in Gauteng serves the internet a vibe that delivers some of his new hits and classics. With songs like Why You Feel So Bad and No Offense, Reason delivers an impeccable performance, which proves why he deserves respect in these hip hop streets.

Known for her powerful, captivating and sultry vocals, Durban-born singer Shekhinah Donnell takes on episode four of the series. She starts the performance with a nostalgic cover of the old school track Gin & Juice by rapper Snoop Dogg. Shekhinah, who was a contestant on singing competition Idols, stays true to her soulful roots in this episode as she delivers covers to classics and her own hits. The 22-year-old vocalist continues to make waves since entering the music scene with features by top producers like Black Coffee and Sketchy Bongo.