17 Nov Zimbabwe: See how creatives are responding to the military takeover in Harare

Earlier this week, the Zimbabwean military made a move to take control of the country’s capital in what seems to be an unusually peaceful coup. The military takeover was ostensibly to target the “criminals” surrounding current President Robert Mugabe, however the situation has developed and the army is currently in negotiation with Mugabe, who today emerged after being placed under house arrest earlier this week.

We take a look at some of the reactions to the political upheaval. 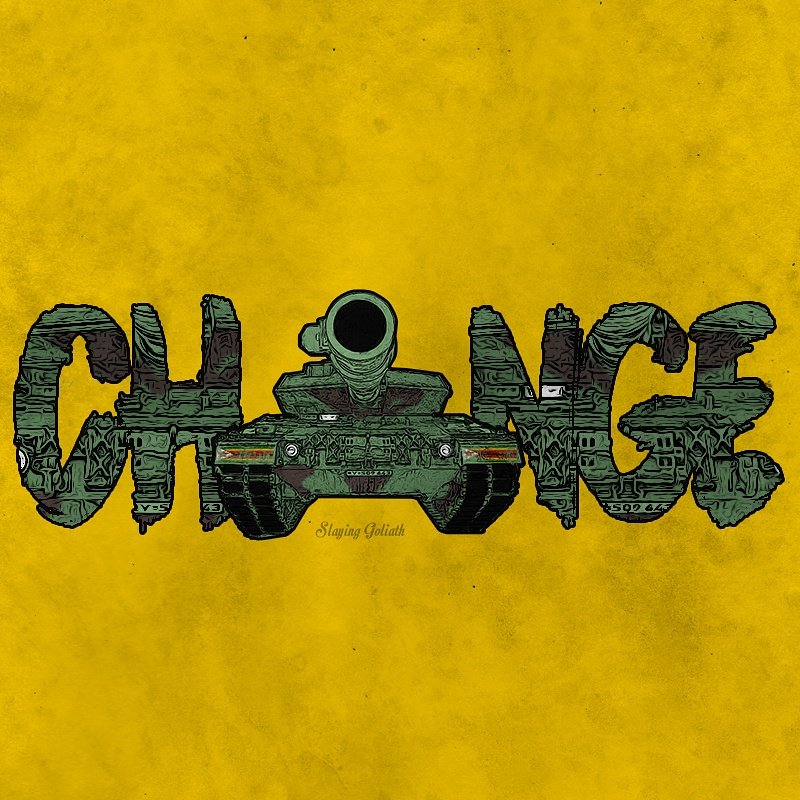 South African designer David Tshabalala created a visual representation of the coup, identifying the violent nature of the army as the impetus for change. In the caption he writes,

“Change: verb to make the form, nature, content, future course, etc., of something different from what it is or from what it would be if left alone. To convert or transform”

The Zoomcomic from the UK illustrated a portrait of first lady Grace Mugabe, addressing concerns that the military coup was agitated by Mugabe’s maneuvering to put his wife in power as his successor. The same artist posted an illustration of Mugabe.

This clip sees Daily Show host Trevor Noah making light of the situation, using Mugabe’s age of the crux of the joke.

Zimbabwe model and blogger Kim Jayde chose to see the positive in the situation.

The beautiful thing about our people, is that tough times Unite Us. Missing home. Praying for Wisdom for our leaders & a peaceful outcome ?? #Zimbabwe

United Kingdom designer Sketchbook Design looks at Mugabe’s house arrest, which is being enforced by the military.

Day 319 #typeofyear The military in Zimbabwe has taken control of the country, putting veteran President Robert Mugabe under house arrest and announcing it was targeting “criminals” around him. pic.twitter.com/VdBEDrFE81

ArtMasterMonroe illustrated a map of Zimbabwe with all the various factors at play currently: its people, the military, and Mugabe himself.

Rowdy Rhino in a Venerated Home, By ArtmasterMonroe A Illustration dedicated to the peoples of Zimbabwe highlighting a recent event of their army removing their president. After I drew out a quick loose thumbnail of my vision, I re-drew the vision on a pre printed map of Zimbabwe. Then I scanned the image and finished the coloring on iPad. #illustrator #illustration #drawing #art #pencil #ink #ipadart #artist #blackartist #zimbabwe #africa #freedom #liberty #democracy #independence

South African Instagram user Christopher Zaayman posted a photo of themselves before a mural of Mugabe along with other infamous despots such as Kim Jong-il and Muammar Gaddafi. The post highlights how opinion on Mugabe changed from a revolutionary hero to a tyrant over the course of his 37 years as the only independent leader Zimbabwe has ever had, first as prime minister, then as president.

UK illustrator Christine chose to do more symbolic representations of the situation, illustrating the new-found hope that Zimbabwe might find peace after life under Mugabe’s 37-year rule.