Nando’s is known for putting their PERi-power behind Southern African art and design, using their restaurants worldwide to globally celebrate the wealth of incredible talent in our country, while making a difference to the lives of Southern African artists and designers with whom Nando’s loves to collaborate.

This contemporary embroidery on metal mesh measures in at 6 X 2.5m and is the result of a beautiful creative collaboration. The work is by artist Marlise Keith, whose mesmerizing style is identifiable in her idiosyncratic use of personal symbolism. Tamlin Blake Studio in Riebeek West employed local women to work on the embroidery. The result is a playful original artwork that will bring a burst of Southern African joy and creativity to Nando’s Oxford in England. 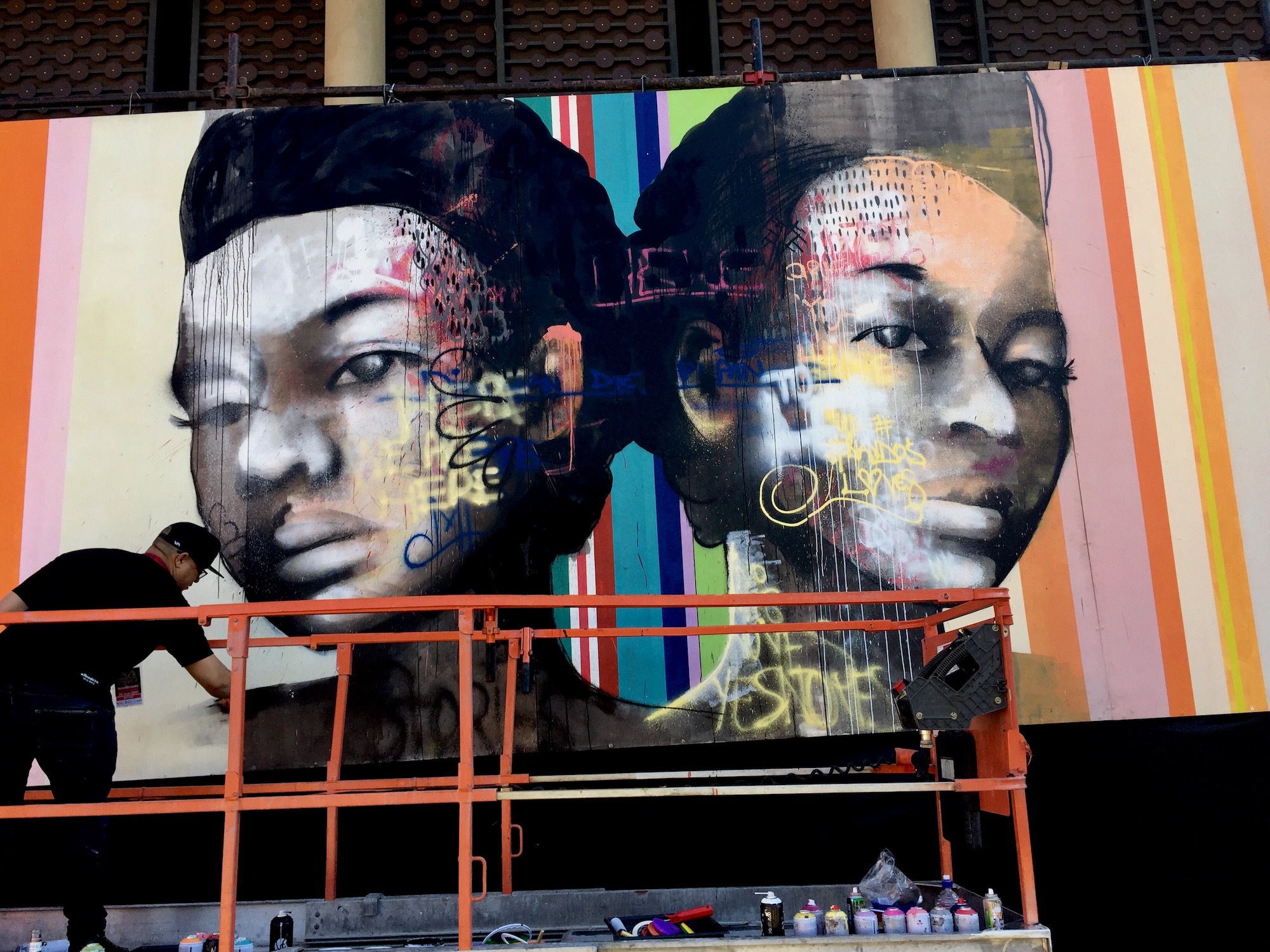 Dion Cupido paints ‘She Loves Me, She Loves Me Not’ alongside the music stage at the Basha Uhuru Freedom Festival 2017 at Constitution Hill.

If you take a drive by Nando’s Bryanston in Johannesburg, look out for the street-facing billboard-sized artwork outside. Mitchell’s Plain artist Dion Cupido took his first step into performance art, painting this mega-scale graffiti style artwork live alongside a live music stage and rocking stage at this year’s Basha Uhuru Freedom Festival in partnership with Nando’s hosted at Constitution Hill. The festival was all about celebrating South Africa’s constitution, celebrating the youth of 1976 through creative expression, and creating a platform for South African youth to connect with creative industries and opportunities. Keep that all in heart and mind when you take in ‘She Loves Me, She Loves Me Not’ now permanently installed outside Nando’s Bryanston for the public to enjoy. 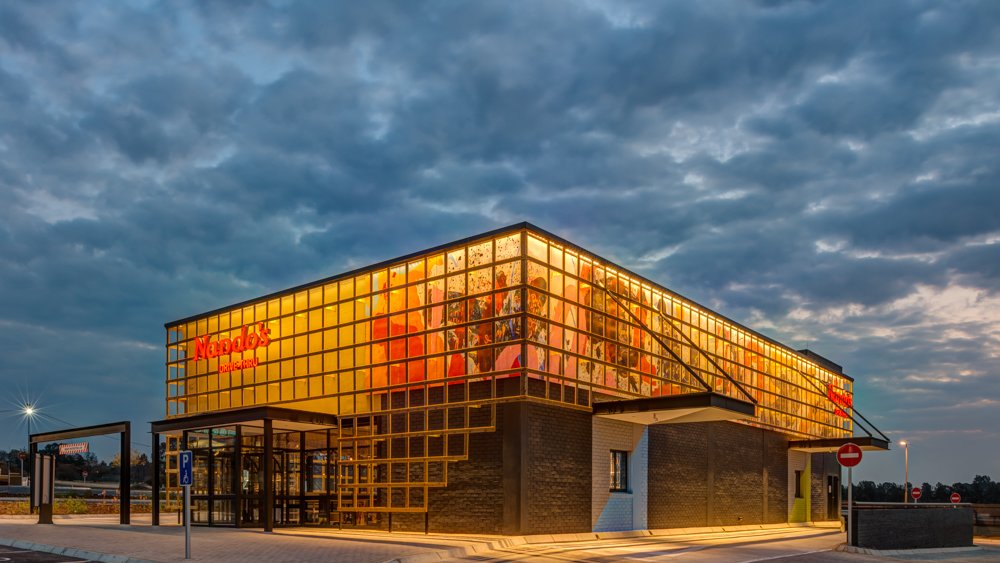 A Christo Basson artwork composed of 32 panels wraps around Nando’s Bryanston Drive-Thru, as a public art installation for Nando’s guests as well as pedestrians and drivers to enjoy.

“This site-specific artwork is inspired by Parkour and free running,” says artist Christo Basson. “What I find interesting about these urban sports is the gymnastic-like movement, but with the athletes wearing urban clothes. If you look at the artwork you’ll see that all the guys who feature are jumping or mid tumble. My process began by working with parkour imagery when creating a series of works for Nando’s Artists Society. I’ve taken these works and stitched them together to create this larger work for Nando’s Kyalami. I thought of a billboard when I designed this work – the idea is that at 50 meters away you look at it and see the big picture in the first five seconds, but when you get up close and personal with the artwork you discover there’s an individual artwork in each block. Each block could be lifted out as a work on its own.”

“After recently travelling to Mozambique on an inspiration trip lead by Tracy Lynch for Nando’s I did I series of paintings which I have called The Maputo Abstracts,” says Cape Town artist Henk Serfontein. “These were exhibited as part of the epic pop-up exhibition at Nando’s Soho. The Nando’s SOHO mosaic is a permanent installation in the restaurant based on this series of paintings. I titled the mosaic the Ponto de Ouro Mosaic, referring to the main road between South Africa and Maputo. The notions of crossing boundaries and making connections between places, people and things are ideas that interest me as an artist.
There are over 80 individual colours in the mosaic, and the materials used range from natural stone, to man-made materials such as Venetian glass. The mosaic itself was constructed by a team from Spier Arts Academy and took a whopping 4,800 hours to complete by 21 apprentices!

The work is essentially a collaboration between myself and the Spier Mosaic studio, managed by Spier Arts Trust, and includes some pieces from the Qubeka Bead Studio.” 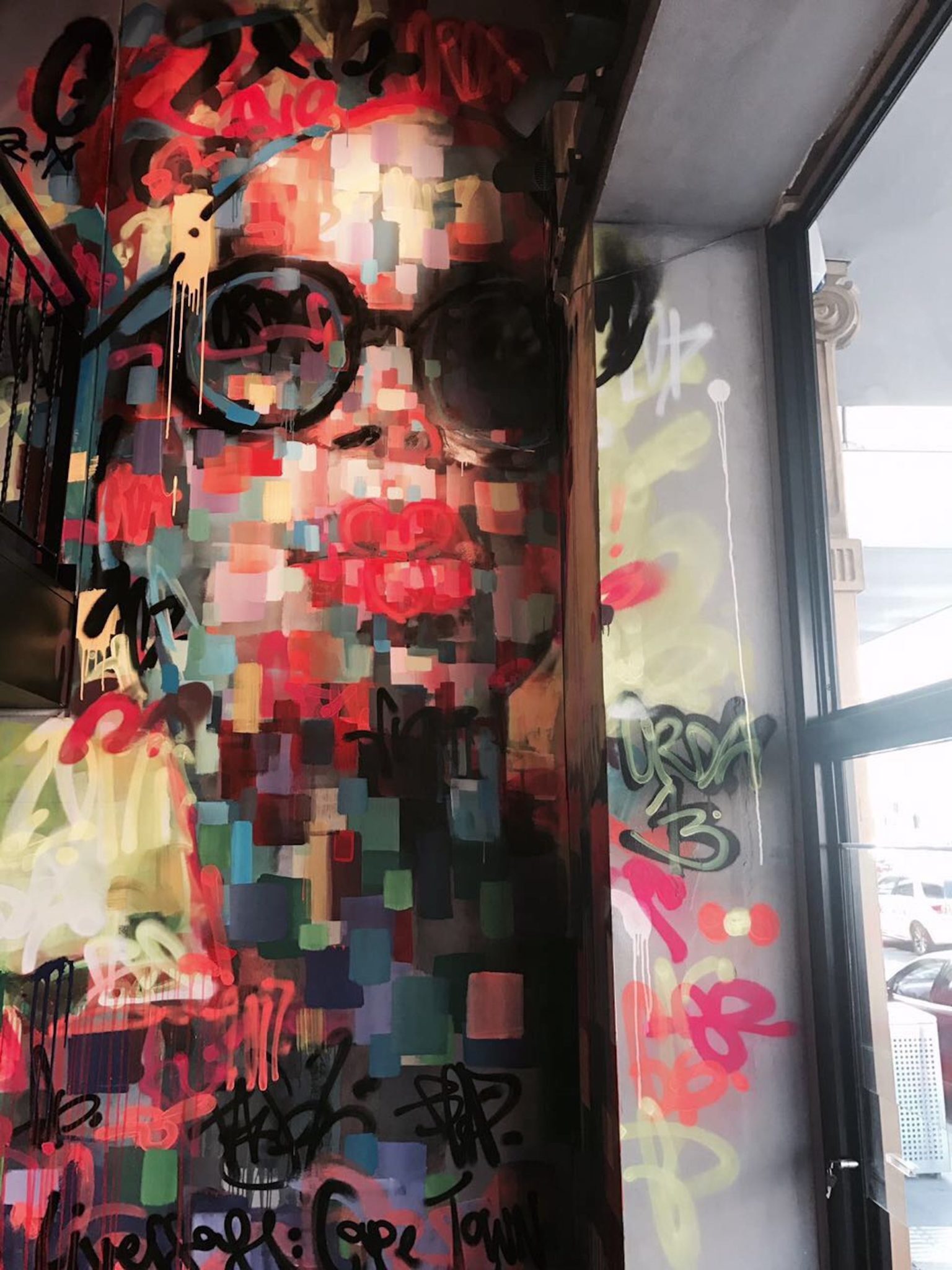 “This year I travelled to Melbourne in Australia to painted a giant graffiti-style portrait of a woman for Nando’s Flinders Street in Melbourne,” says Kilmany-Jo Liversage.  “It’s one of several large-scale site-specific works that I’ve done for Nando’s around the world. I’ve called this latest work Hosiera2017 and she’s a woman caught up in a moment of contemplation and deep thought. She’s someone waiting for a bus preoccupied with her thoughts amidst the busy sprawl of urban life. She is a full-colour spectrum captured within the hues of city life.” 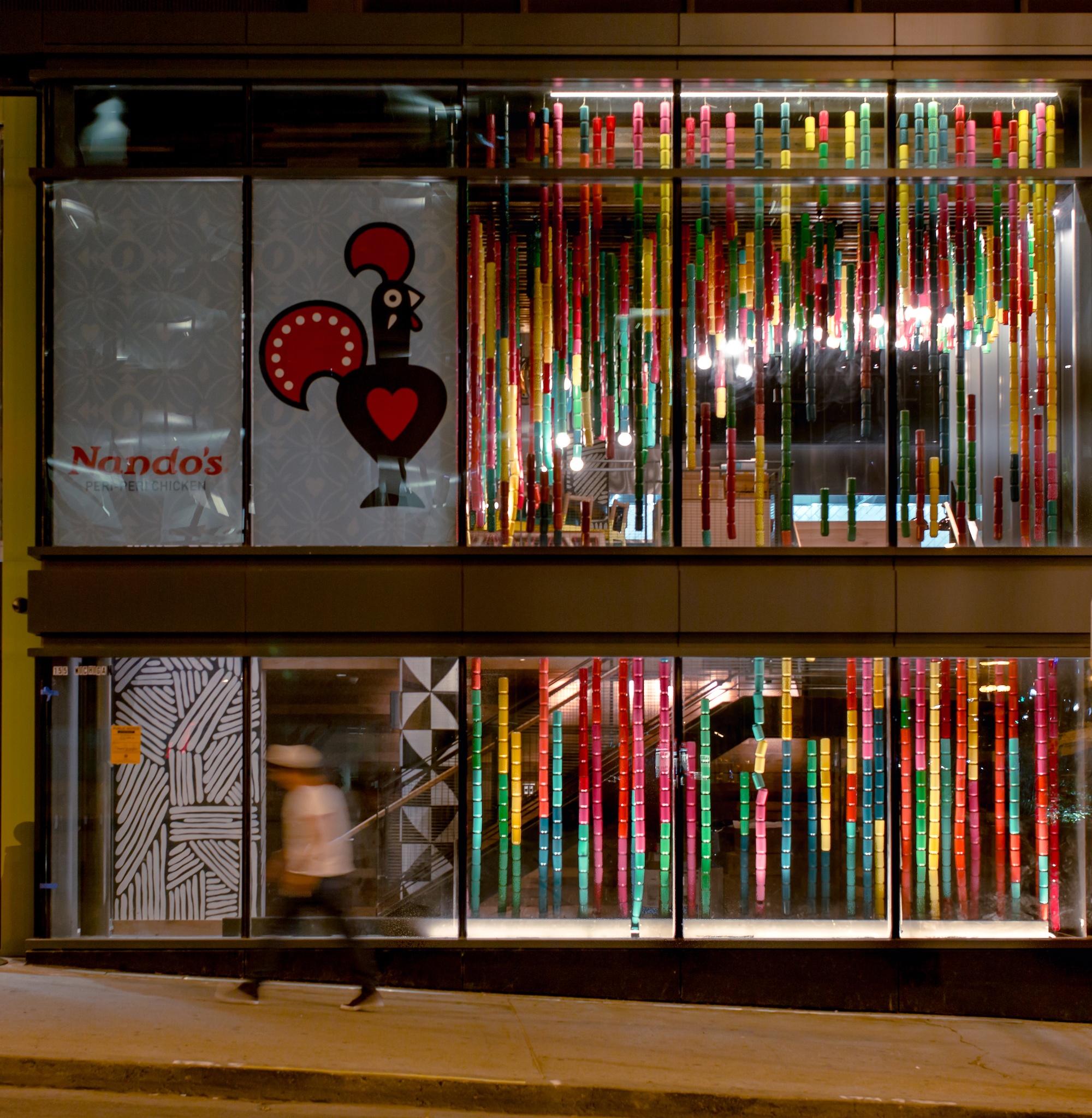 The Can Beam light by Tulsha Booysen as seen from the park in Nando’s Michigan Avenue. 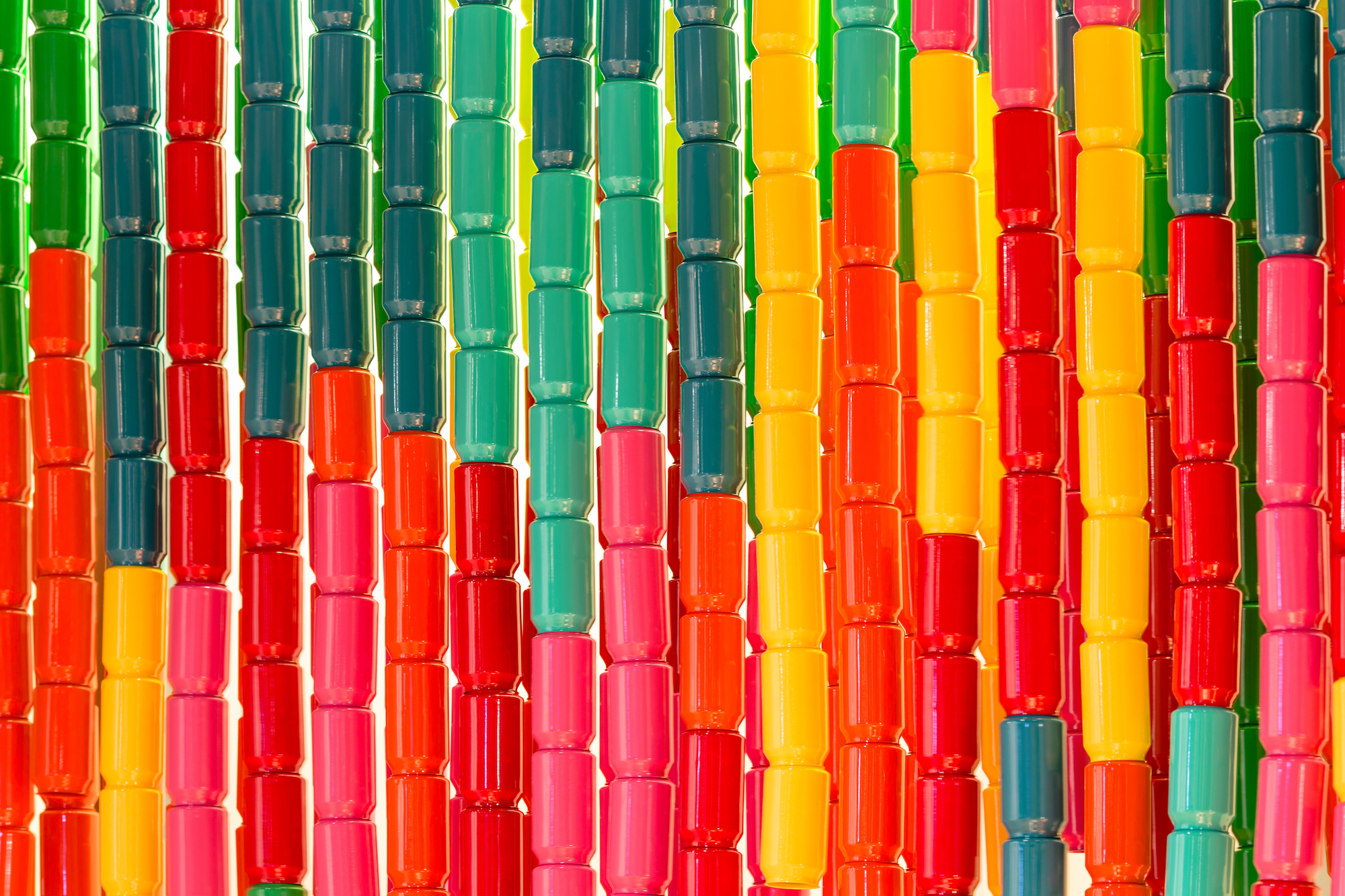 The Can Beam light has taken you Tulsha Booysen of Brooklyn in Cape Town from a Nando’s Hot Young Designer finalist in 2015 to Chicago for a mammoth installation of the light at Nando’s Michigan Avenue in 2017.
“In 2015, when I was still at school, I designed a concept for the ‘CanBeam’ light as my entry for the Nando’s Hot Young Designer Talent Search, using upcycled cooldrink cans as beads. The name The ‘CanBeam’ describes itself. The ‘Can’ that stands loud and proud and represents an individual, whilst the ‘beam’ that each light casts represents the light that an individual shines. As a finalist in the Nando’s Hot Young Designer Talent search I had the opportunity to work with a mentor, Liani Douglas, as well as with interior designer Tracy Lynch, to develop a prototype of the CanBeam. The CanBeam uses upcycled soft drink cans as modular ‘building blocks’ strung together. ”Fast forward to 2017 where the same two mentors, together with, collaborated with Tulsha to produce a dramatic Can Beam featuring 6800 upcycled cans. The installation is suspended over the main stairwell at the new Nando’s and visible to passersby on Michigan Avenue.