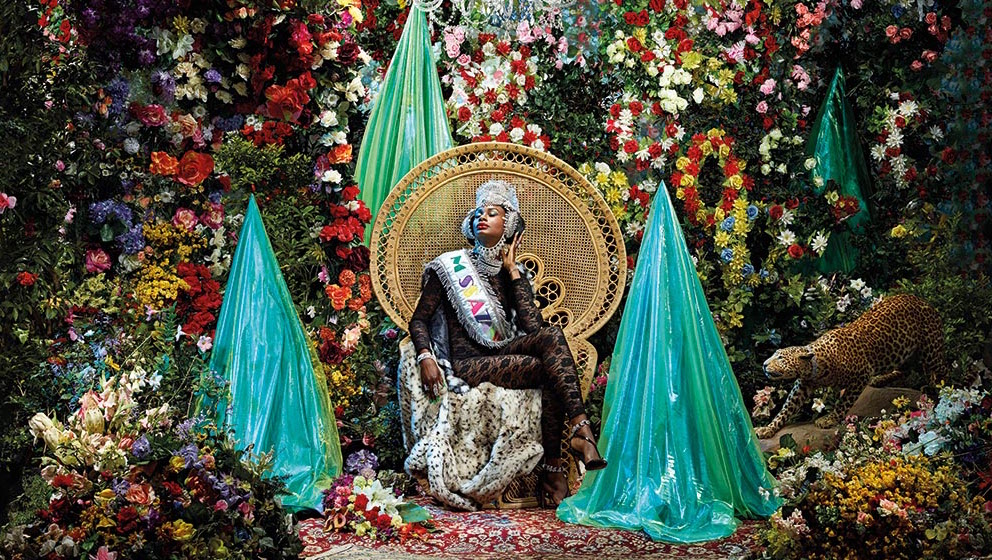 12 Feb On art, the colour green and finding hope – Is the grass greener on the other side?

Posted at 11:43h in Art by Sandiso Ngubane
0 Likes

Green is a colour we often associate with health, renewal, hope and rebirth and I find it interesting how some local artists have recently used this colour in their work, highlighting some of the most pressing issues we are facing.

Take Athi-Patra Ruga, for one. Accents of green punctuate the artist’s tapestries in his 2017 series Queens in Exile, and the colour features quite prominently in 2014 collection, The Future White Women of Azania Saga, where colourful images depict the artist’s renderings of a lush, mythical Azania.

Both works came at a time when the issue of land redistribution in South Africa has increasingly become a sticking point as we overcome the rainbow nation euphoria, and the shattering of dreams as poverty, landlessness and dispossession stubbornly persist as a defining feature of post-apartheid South Africa.

Gerald Machona used the decommissioned Zimbabwe dollar, creating green accents with the one billion dollar note specifically, to create his Ndiri Afronaut (2012) sculpture. “Central to this body of work is my use of various decommissioned currencies as an aesthetic material,” Machona explained in his artist statement from the Goodman Gallery.

A Land Without A People, For a People Without A Land (The Return). (Athi-Patra Ruga)

This was in an attempt to link historic and contemporary trends of African diasporic migration on the continent, and to comment on Zim’s economic decline in the face of former President Robert Mugabe’s failed “indigenisation” project.

Machona further explained at the time of his exhibition: “Most recently, there’s been a migration of Zimbabwean nationals into neighbouring SADC countries and abroad, following the country’s political and economic collapse. While South Africa hosts the largest population of these Zimbabwean nationals living in the diaspora, in May of 2008 they were amongst the foreign nationals persecuted by the xenophobic attacks.”

It was reported that people were targeted through a process of profiling that assumed authentic South Africans are lighter in complexion or fluent in an indigenous language; this resulted in 21 of the 62 casualties being local citizens, Gerald points out.

“Such beliefs have complicated who is considered an ‘insider’ and ‘outsider’ in South African society. Pitting ‘native’ against ‘alien’ and perpetuating an exclusive sense of belonging that is reminiscent of apartheid doctrine.

“There is a growing need in the post-colony to deconstruct these notions of individual and collective identity, since ‘nations’, ‘nationalisms’ and ‘citizenry’ are no longer defined solely through indigeneity or autochthony.”

A running theme can be dissected in both Machona’s work and that of Athi Patra Ruga’s. Is the grass really greener on the other side? In Machona’s case, such a question can be posed in the context of the migration of Zimbabweans to South Africa, and the reaction of South Africans — many of who instituted violence on Zimbabwean nationals, convinced that their arrival here was to blame for unemployment, crime and other social ills.

In Athi Patra Ruga’s case with The Future White Women of Azania, the mythical idealisation that is Azania, lush and unaffected by colonialism begs the question: what if we did indeed take back the land?

In another instance, we saw Buhlebezwe Siwani’s use of the iconic green Sunlight soap that is so synonymous with the socio-political reality of black South Africans. We are all familiar with the cheap, multi-purpose soap used by many for washing clothes, bathing, even as toothpaste and deodorant.

For her series, titled Qunusa! Buhle (2016), the artist weaves a tale of the constant physical and emotional awareness society imposes on female – and indeed femme – bodies.

This was well ahead of #MeToo but came nonetheless in an era where I think we can all agree that “time’s up” for gender based violence and discrimination.

Of her use of the green soap, Siwani said the work was “about how I used to be washed by my grandmother. It was painful. Not physically but emotionally. It was draining because she wouldn’t just wash me, she’d wash me in front of people and there I was, this seven-year-old and my aunt goes, ‘Qunusa!’ [bend over].”

She adds: “When they wash boys, they don’t do that to them. So I started thinking about this whole issue of purity and how women have to be constantly purified, and constantly cleansed. Yes, we menstruate, we have sex but men also have do the same.”

These are all subtle ways in which green emerges as a colour for expression in highlighting the issues we face today; from the dispossession that is highlighted by the land question, to the urgent need to dissect and address the ways in which gender perpetuates violence and inequality.

There’s also the issue of our current economic reality, that of Zimbabwe, and the hope that green and indeed the emergence of new political players – Emmerson Mnangagwa in Zimbabwe, and Cyril Ramaphosa in South Africa – represents: hope!

Is the grass greener on the other side? No one knows but we nonetheless yearn for change, rebirth, renewal, and hope as represented by the colour green.

*This article was made possible by adicolor