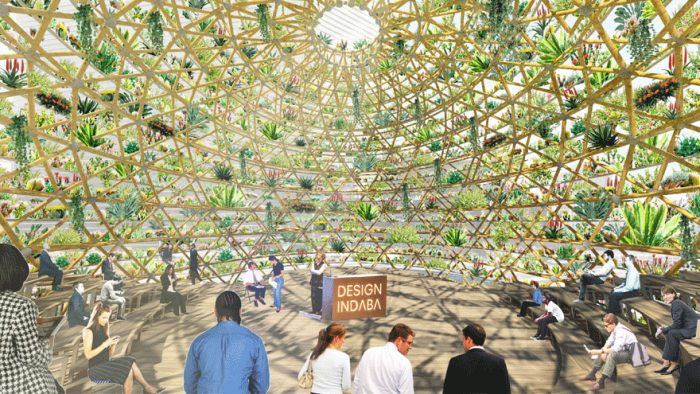 27 Feb ‘Design Indaba is a white privilege’ – How do we shape an inclusive future?

“Design Indaba 2018 is a white privilege …” I posted to Facebook on the opening of the conference last Wednesday, with a picture of the Artscape theatre audience, which I assessed to be over 90% white.

Three days later, the post has been shared more than 150 times, with hundreds of supportive comments and reactions. This is the closest I’ve ever been to “going viral”. I say this to emphasise that I’m no influencer.

This was my third Design Indaba and the third time I’ve paid for my own ticket, which this year retailed at R8 300. I work in education, so I received a R1 000 discount.

Entrepreneur Bheki Kunene commented on my post: “As a black creative there are many basic problems I could resolve with the money [for a Design Indaba ticket] than spend it on an event. In terms of context, some privileged folks get such as interest on investments so its a no Brainer to attend.”

Bheki’s comment got me thinking about buying a Design Indaba ticket as an investment, and the broader issue of access to value creation.

I’m privileged because — simply put — I am white, can afford the ticket and therefore have access to a whole system of value creation. The central issue is that far too few black South Africans have access to these value creation systems. Privileged access is so established in the country that it’s a norm. But if gone unchecked for much longer, we’re going to drive our gilded carriage over a cliff.

I run Umuzi, an organisation working with employers to transform the creative and tech industries by giving more young black people access to these sectors through skills development programmes. I get a return on my investment in a Design Indaba ticket, flights, accommodation. And my privilege gets me access to elite spaces, which allows me to meet potential partners and clients.

The system of privilege is so systemic it can appear coincidental. My AirBnB host happened to be a senior creative at Woolworths, a headline Indaba sponsor. At the conference, I bumped into several new leads, as well as existing Umuzi partners like Setlogane Manchidi from Investec, one of the few black delegates, who helped to set up our skills development programme. Any one of these casual encounters could lead to a deal and justify the cost of my trip.

Throughout the conference, local, other African, and international acclaimed speakers, took the DI stage. Nearly all of them started by acknowledging Ravi Naidoo, Design Indaba’s founder and managing director, a man who, “gets things done”.

This year alone, Design Indaba and Ravi were credited for instigating three major, Cape Town urban interventions: the Arch for Arch, the Zeitz Museum of African Contemporary Art (Mocaa) and a new, ambitious public space intervention, the Dome of Plants. These projects are laudable, and each helps define Cape Town in a new and important way. But the process of their creation betrays a culture of elite access, which is deeply flawed and must change.

Each of these projects is championed and lead by a white man, one South African, one British and one Dutch. I’ve watched each of these three, impeccably talented and thoughtful, praise Ravi, personally on the stage at Design Indaba for the pivotal role he’s played in giving them access to lead these projects.

In a cynical view, one could argue that Desmond Tutu’s name for the Arch and Hugh Masekela’s for the Zeitz Mocaa (the second floor of the museum will be named after the late iconic activist and musician) have been appropriated as African symbols, while the real value creation is left to privileged, white European men. No doubt this is not the intention of Ravi or Design Indaba but it does appear to be an unmitigated consequence of the privileged access that white men, like me, have to Design Indaba.

In 2018, 24 years after the overthrowing of white minority rule in South Africa, after Rhodes and those alike have fallen, is it justifiable or responsible to invite still more white European men to design and define public space in one of the South African capitals? Is it reasonable that the leading creative gathering in the country, and the continent, is still 90% white?

Only in Cape Town, and only at Design Indaba, I suspect, can this pass. Design Indaba appears to benefit from a halo effect: an unjustified reverence we South Africans all seem to share for ideas, products and people from overseas. While we fawn over the conceptual elegance of the Zeitz Mocaa’s breathtaking architecture, feel cocooned under the Arch for the Arch, and marvel at the prospect of a green garden oasis to relieve our drought stricken minds, let us not forget that soon we will have to wake up from this fantasy.

Transformation’s Day Zero is coming. The Mandela inspired miracle of 24 years of continuing inequality can not continue. Patience is wearing thin.

We need to open access to value creation. But how?

My first thought is to build on a Design Indaba success, which this year was the emerging creatives programme at the conference, sponsored by the Department of Arts and Culture. Neo Mahlangu is an Umuzi alumni who was selected as a 2018 DI emerging creative.

“I thought creativity was this,” she says with her hands balled together. “But now I realise it’s so much bigger,” her hands now exploding to a full armed stretch. The emerging creatives programme gave her a chance to attend the DI simulcast (a real-time video screening) and to display and sell her ephemeral and evocative charcoal drawings, next to the main event. For Neo, Design Indaba has meant access to knowledge, network and sales.

But what happens to Neo next year? She may be able to attend the simulcast again, which costs between R1 000 – R1700, but says she is unlikely to afford the main conference. At the simulcast, Neo has access to the content but is still excluded from the process of value creation, and monetising her Design Indaba ticket.

The main theatre and access to the valuable network that can turn a Design Indaba investment into a return, remains a white privilege. And Design Indaba and the South African creative sector are poorer for not having the perspective of more, young, female designers, like Neo, in the room.

I have several ideas such as buy a ticket for individuals who cannot afford to attend, sponsor another, which I will pitch to Design Indaba and the brands and organisations, which support it. This incredible event has, and should continue, to live up to its tagline, “A better future, by design”. But it, like everything else in South Africa, needs to be more inclusive.

The underlying problem won’t be resolved with Design Indaba tickets. Design Indaba’s inaccessibility is a symptom of a larger problem. We cannot continue to allow creativity to be a value creation process captured by whites. We need to transform access to value creation in South Africa.