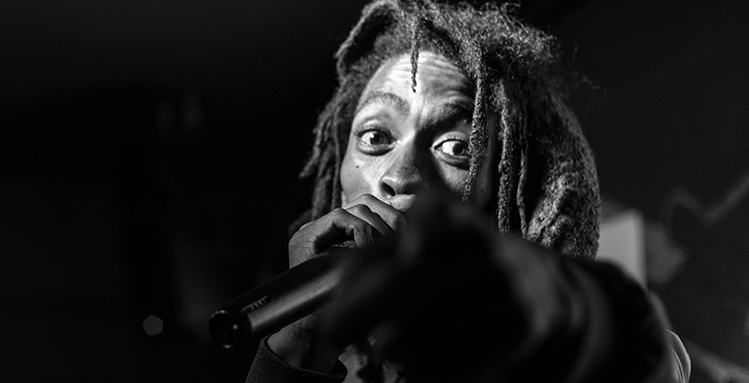 “Afrikaans hip hop in Southern Africa is a budding genre with many parts of the country partaking in the appreciation of this artform. There are apparently 52 variants of Afrikaans spoke throughout Southern Africa,” says rapper Niko10long. And indeed, the Afrikaans hip hop is a major genre within local rap, with artists such as Yoma and Linkris The Genius, and many more repping this particular scene, which has a long and important history that contributes to South Africa’s rap legacy.

Niko10long, is a rapper living in Cape Town, whose conscious raps contain thought-provoking lyrics on topics such as politics, his community and more. He is also a part of the Afrikaaps rap community. “Afrikaaps is regarded as |the prouder offspring of Gamtaal, a hybrid language born from tightknit multicultural communities like the District. It’s a multilingual melting pot of English, Afrikaans and isiXhosa”, according to a piece on rapper YoungstaCPT and how “Afrikaaps is decolonising the language of the coloniser”.

Born Leagan Davids, Nikon10Long was introduced to hip hop in the early 90s. When the rapper later moved to Wesbank, where poverty, unemployment and gangsterism was rife, he began his journey making music.

Niko10Long has self-produced some of his music, and is currently working alongside producer SIEP on their upcoming project titled 7ewe. Niko10Long is also preparing to release his second-full length album DubbeleLONGonsteken.

You mention the standing of Afrikaans hip hop. Where do you think this movement and community is currently at within the wider local hip hop industry?
The Afrikaans hip hop movement is going to appear on the world’s stages very shortly. Just watch this space. People think that the Cape only has one or two MCs who are making a noise. Same applies for PE, Durban, Bloemfontein, Kimberly and Joburg but there’s actually an entire hip hop community on the ground level that are constantly busy making works. Until you realise and become wise about the ground level activity in the Cape Flats and the rest of the Western Cape; artists in  Summer Greens, Jacksonville, Galvandale in Port Elizabeth, Bloemfontein or Westbury and Eldos in Joburg, an industry won’t exist. InI [the God within me] is also part of the unveiling process that is taking place. Borders can’t exist in a borderless expression like hip hop music.

You rap and talk quite a bit about land restitution, what are your thoughts on this?
InI feels that we are the rightful owners of this land. However, at the moment we are being told that we are behind the wagon when it comes to this issue. Many people aren’t aware of their connection to land. People of Colour were engineered to believe that we are foreigners on our own grounds. District Six, Simon’s Town, Woodstock, Green Point, Sea Point. And we’ve been dumped (and continue to be dumped) in Blikkiesdorp, Delft and Wesbank. It’s almost as if people with a lot of money from foreign places are favoured here. Who are we and who are they? We were displaced for years and continue to be displaced. Surely InI’s people can’t struggle like this through generations.

You share that hip hop has given you guidance before becoming a Rasta. How does being Rasta add to your life and music?
Rasta taught InI about Pan-African consciousness. During my school career, the entire curricula was dedicated to Dias, Columbus and Van Riebeek. When I rized as a Rasta, I found thinkers like Mutabaruka, Steve Biko, Harriet Tubman and Malcolm X. In the ghetto, Rasta is a method of garnering Knowledge of Self and understanding how the oppressor operates. Plus, Rasta helped me understand my environment.

Who does the production on your songs, and are there certain individuals that you enjoy collaborating with?
Siep (Soul in Every Person) has been my producer for many years now. Sunny from Stellenbosch, Beatroot from Namibia and Mr T from Queenstown have also all worked on my productions. InI is part of Ill Major Movement. There is also an entire underground movement of people working on this side, beyond the confined borders of the city.

In your rap in the OkayAfrica video, your lyrics refer to your style being indigenous to Khoisan. Do you mind sharing more about this?
Look, the Khoi were the first people that walked here before the colonisers arrived with their “26” ideas, armed with ships and “magic”. They arrived, enriched themselves and deprived us (the indigenous people) of our rightful ownership of our land and who we are as people. They tried to dumb us down by forcefully projecting their assumptions of who we are onto us. InI uses hip hop to explore who I am by expressing myself on a level of indigenous consciousness. Exploring the knowledge that was kept away from us, rediscovering it and sharing it with InI’s people.

Where can we find your music?
I’m on Facebook and Ill Major Movement.

*This interview has been edited