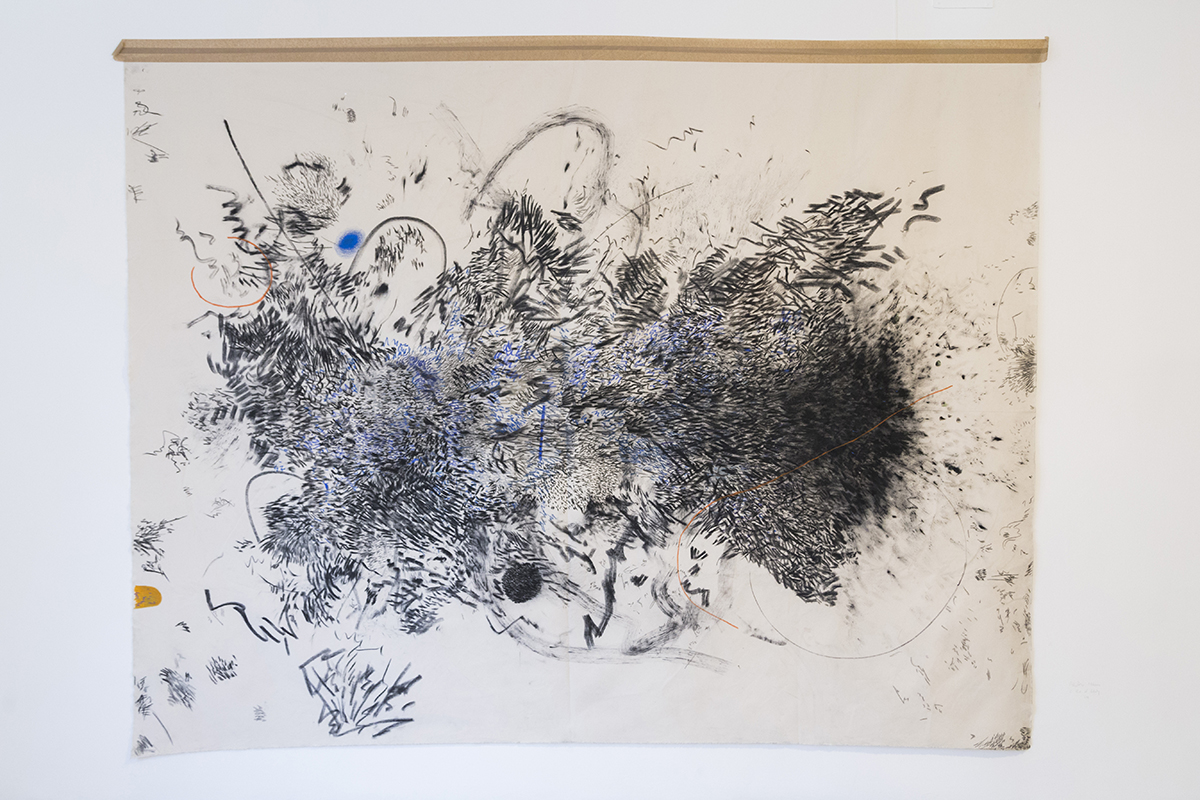 Posted at 10:49h in Art by nkgopoleng Moloi
0 Likes

Pebofatso Mokoena is a Joburg-based emerging artist known for his painting. Roughly three years after graduating with his National Diploma in Visual Art from the University of Johannesburg, Mokoena has contributed tremendously to the art world; with his work showing in various exhibitions and private collections including the Springs Art Library Collection and the South African Embassy Art Collection in Washington DC.

While participating in the Kooshk residency in Tehran, Iran, earlier this year, Mokoena started experimenting with charcoal, particularly on a large scale —keeping an open mind in working with charcoal and what that could look like. He admits the process is different. His two large scale works — A Hive of Activity and Temperature Rising — were inspired by the beauty and poetry of the city allowing himself to be sensitive to space and the hive of movement around him while exploring the parallels that could be achieved between charcoal drawing and painting.

Much like his work, Mokoena is contemplative and every sentence is considered. We recently caught up to chat about his practice and how he applies the lessons learnt in painting; translating and exploring those ideas through the language of drawing (particularly using charcoal). “I’ll always think about painting whether the work turns into a painting or not.”

1. Can you tell us a bit about the residency in Tehran? What was the structure of the residency and what was your primary focus during your time there?

The residency at Kooshk was an open-ended programme, which lent itself to experimentation. It allowed me to engage in conversations that lie outside of the binary narratives between African and Western historical discourses. The experience became ground to strengthening my understanding of what I am dealing with as a human who experiences multiple transient states on a daily basis. I was extremely fortunate to work with Asanda Kupa (South Africa), Terè Recarens (Spain) and Saadie Choua (Belgium). They were able to provide healthy conversation which in turn helped me grow, and I am thankful.

2. You are typically a painter, however you recently started working with charcoal. What does this departure in medium mean exactly? From a technical aspect, how are you engaging with this new medium?

Yes, I am a painter, but first I am an artist. I wanted to paint so dearly when I arrived in Tehran but when in conversation with the project co-ordinator, I kept open to the possibilities of form, text and materials that may emerge as primary in the work. In that sense, I didn’t expect to work on charcoal, but I was open to the possibilities of what I could achieve with the medium.

My friend’s mother passed away while I was in the studio, and I remember having this sudden need to lay down and understand rest, and in a way, Temperature Rising became a part-tribute to him and his family. Technically, there was urgency in the actual working of the canvas because I wanted to recalibrate the way I had been seeing the world. Moving into a super-primitive medium, got me thinking about the fundamentals of drawing, and image-making. In that way, it turned out that charcoal became a great friend in understanding a new avenue in my practice.

3. Let’s talk a bit about Tehran as a city? What are some of the themes and elements specific to the city and how do they present themselves in these two specific works?
First off, Tehran is a beautiful city, with immense history — one is not able to get through all that they would love to see, alone, in a month. With that being said, it operates in the same way as an ever-growing city would. I wanted to experience the city, not the other way around. Like many cities around the world, Tehran is a part of current global conversations and I had to be mindful of situational plays at hand. The elements in these works are as simple as my daily experiences of working and moving in the city.

4. What themes are you currently exploring?
The only thing I’m working on currently is to understand my practice better. As I grow (as a human being), my work grows within me, and it becomes my service to bring myself to sharing the work with the world. Themes are currently eluding me in this moment, and I’m allowing them to. In conversations about the worlds that I live in; there still lies the possibility of showing new work.