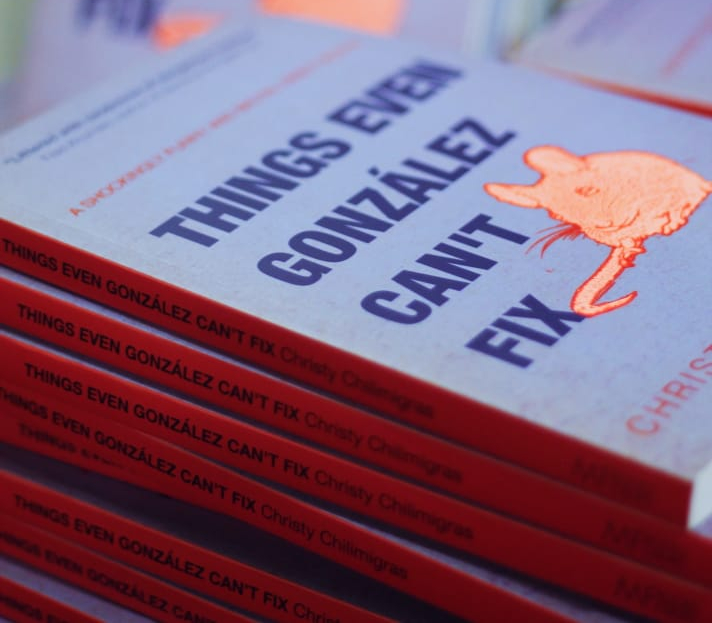 Posted at 12:17h in Books, Featured, Publishing by
0 Likes

Christy Chilimigras’ shockingly brilliant and brutally funny debut memoir, “Things even Gonzalez can’t fix”, was recently launched to critical acclaim. It is the story of a 24-year-old Greek South African girl, “growing up in Johannesburg in a space of pure chaos, raised by two addict parents. In reality, Christy, otherwise known as Mouse, is raised by Tiger, her older sister. Their childhood is strange, made up of crack excursions to Hillbrow at 3 am on second weekends, courtesy of their father and a dope-smoking mother, Old Lass, who raises the two young girls single-handedly while starting her own business”.

“It was quite simply a story that my cells insisted I tell.”

You wrote the book in only five and a half months. How did you manage to find your words and complete the story so fast?

In so many ways a memoir is incredibly difficult to write, but in others it’s quite simple. Writing a story that’s your own fuels your momentum in a way that’s really helpful. I wrote the story chronologically because doing so came naturally to me. Knowing what came next at the end of each day made the whole process easier to stomach. (Also, I was terrified my publisher Melinda Ferguson might change her mind about the book so I was adamant to get her the first draft before she had a chance!)

What was your writing practice for the book – did you have a regular, daily writing schedule or do you tend to work in bursts?

When I started writing the book, I was freelancing for a few clients but definitely had an abundance of time to dedicate to the book. So I’d slot it into my day the way I did with my other work. I jumped between coffee shops between each portion of work like a mad woman who could afford luxuries such as cappuccinos and wasted petrol.

About two months into writing it, I took on a huge freelance gig that saw me working on-site at a corporate from 9-5. I had to shuffle the routine I’d settled into and made the book my priority in the sense that it was the first thing I focused on each day. The bulk of the book was written between 5 – 7 am on my balcony at home.

How have the people in your life reacted to the descriptions of your life growing up – particularly those who you have written about?

It’s been overwhelming seeing how beautifully people have responded to my honesty and my story. There were crippling moments while writing where I was certain the shame I felt over certain things might actually kill me. Yet, I can genuinely say that since the release of the book, I’ve been met with so much love.

Obviously not every single person in my life has been thrilled all of the time, and I get that. I imagine it’s pretty terrifying when someone writes about you from their perspective of what the truth is. Two people can see any one situation in a completely different light. It’s because of this that I tried my best to turn the lens on myself while writing. However ‘hard’ I was while writing about my mom or an ex-boyfriend or a best friend, I was harder on myself. I came out of the writing process and realised I am far less innocent than I believed I was for a long time. In terms of my relationships with my loved ones now, everything feels more sore but more honest. The book has kind of forced us to talk about things that families try to avoid at all costs.

Do you feel unburdened now by the retelling of some of the incidents and would you say that writing provides you with a form of healing?

I think the biggest misconception about memoir-writing, at least in my experience, is that it’s an instant, fabulous catharsis. Being ready to write about your experience isn’t necessarily the same thing as being healed. I’m not the authority on any of the issues I wrote about, be it growing up around addiction or experiencing covert incest. I’m a writer who decided to start with what she knew.

This being said, I definitely feel ‘lighter’ in some ways. I found that telling the truth can be quite addictive. I’ve shared things with people that I thought I’d take to the grave, and I didn’t burst into flames from doing so. That’s a really amazing feeling. The people that matter most won’t budge.

Who is González and can he still fix things for you?

The title was taken from an incident in the book where I listened to Jose González on repeat because his music always managed to make me feel better; until one day even he couldn’t seem to do the trick. It speaks to those simple, sneaky joys we all have in life that manage to console us when we’re in tatters, and the helplessness we feel when those same joys aren’t in fact the fool proof cures we believed them to be. I still listen to his music from time to time, and it still makes me feel better and makes me feel worse. It’s incredibly beautiful music.

For more information on where to purchase the book, go to https://www.christychili.com/