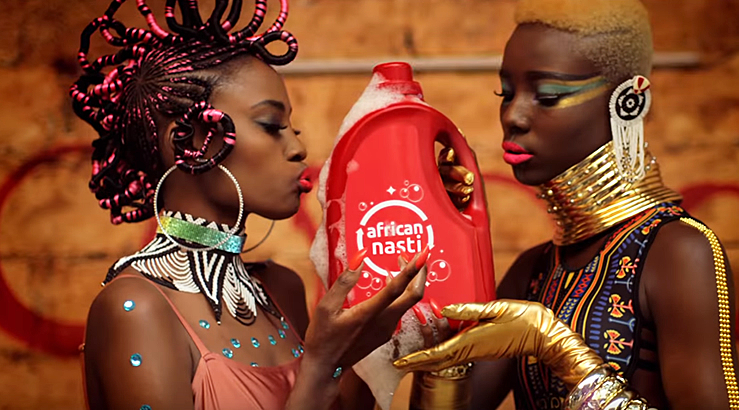 Afrofuturism, a term coined in an essay by Mark Dery titled ‘Black to the Future,’ (1994) and has become a widely embraced concept around the globe with a timely arrival in pop culture too.
As we saw with the release of Marvel’s Black Panther earlier this year, it’s on the rise; whether it’s rise is trend born or due to the symbolic representation of a utopian dream for people of colour is irrespective. Afrofuturism is providing a pedestal for the worldwide contribution Africa is making towards creativity and technological advancement; it’s worth noting that we’re all creative – Africa has always been creative – popular culture is only now welcoming this awakening, sparking theories claiming that Africa is the final frontier; the US waking up to the #BLACKLIVESMATTER movement along with the birth of Black Twitter; plus much, much more.

As we all know, once a trend enters popular culture, the world of advertising will ride it’s coattails, biting into the core of said popularity and spitting it out as (regurgitated) content in attempt to appeal to as many eyeballs as possible. This, we can assume, was the observation Nando’s has made with it’s recently released ‘More South African Flavour’ spot.

Nando’s stays true to it’s brand tonality: tongue-in-cheek, snarky and hilarious; faithfully delivered to us whilst provoking a chuckle, if not outright LOLling.
The point made: Why are brands selling Africa to Africa like this? And also, there’s more than one South African ‘flavour’ – assumedly referring to the current, steadily tiresome aesthetic and narrative derived from African pop culture in advertising: Afrofuturism.

Whilst repetitively harping on about BLACK-ness, amidst mesmerising flashing images, the original contributor to these messy Afrofuturism tropes is the Cannes Lioness winning Guinness ‘Made of More’ campaign. Directed by legendary, UK-based director, Sam Brown in 2014. Watch and count the amount of times you see neon, thrones and stacked TV sets.

Absolut turns influencers into superheroes in this long-winded, CGI-laden spot also located online under the campaign heading ‘One Source LIVE.’ It’s impressive, but undoubtedly one of many focusses of ridicule for Nando’s. Also directed by Sunu Gonera of Egg Films.

Did you spot the branding of the detergent bottle the two models are kissing in the first shot of the Nando’s spot? Did you manage to read it? It spelt ‘africa – nasti’ in an identity very much like ABSA bank’s recently launched rebrand. The spot is pasted on every screen available in our homes, online, in stores and even in UBERs. The bank’s attempt to get the nation on board with it’s brand overhaul is a blatant on-the-nose intention. We’re not surprised it became one of Nando’s’ Afrofuturism targets.

This ad is gorgeous to look at. It’s won multiple awards. It’s also deserving of Nando’s’ trolling. It uses many devices that encourage the viewer to remain glued to the screen that are plainly overdone. Rooftop smoke bombs, powerful painted faces, and steampunk masks all feature repeatedly in this youth-aimed vignette.