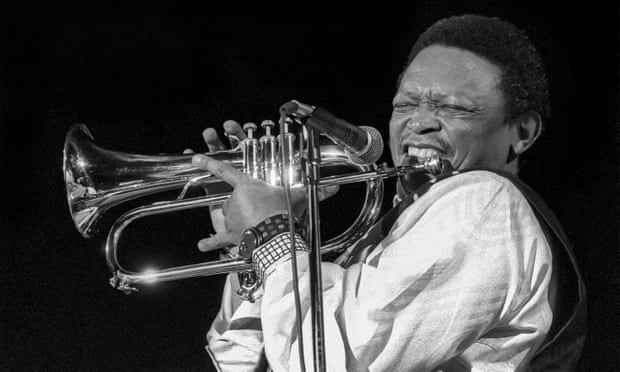 It has been a year since iconic trumpeter Hugh Masekela took his final bow but there is no doubt of his indelible contribution to the local and international music industry as well as equal rights activism through art. Masekela had incredible success during his prestigious decades’ long career – it is only fitting that we reflect on just five of many milestones that earned him is legend status.

Whilst in exile Hugh Masekela composed his Grammy award-winning song Grazing in the Grass in 1989, a hit song in the USA. Many of his greatest songs were recorded during his time in exile; he left South Africa when he was twenty-one years old shortly after Soweto Massacre and returned three decades later.

He played a significant role in putting together and performing in the orchestra for the King Kong musical in 1959. The arrangements were created with Jonas Gwangwa, featured a cast consisting only of people of colour starring Miriam Makeba in the lead role.

Hugh Masekela with Miriam Makeba in the 1960s, whom he was married to.

In 1981, Masekela moved to Botswana and founded the International School of Music where his activism in the apartheid resistance movement strengthened.

As one of the most respected Jazz musicians in the world, Masekela toured with greats such as Louis Armstrong, Paul Simon, Harry Belafonte, and our very own South African Afro-pop legend, the late Miriam Makeba.

His career which was fueled by his passion to speak out against apartheid and colonialism began when the leader of his youth orchestra, Father Trevor Huddleston, gifted him with his first trumpet at the age of fourteen. Maseke fell in love with the trumpet after seeing the film Young Man with the Horn: “If I can get a trumpet I won’t bother anyone one anymore”, he had said to Huddleston. Forty-nine studio albums, we had the legend that was Hugh.

We salute you, Hugh Masekela and in the words of ABBA, “thank you for the music.”