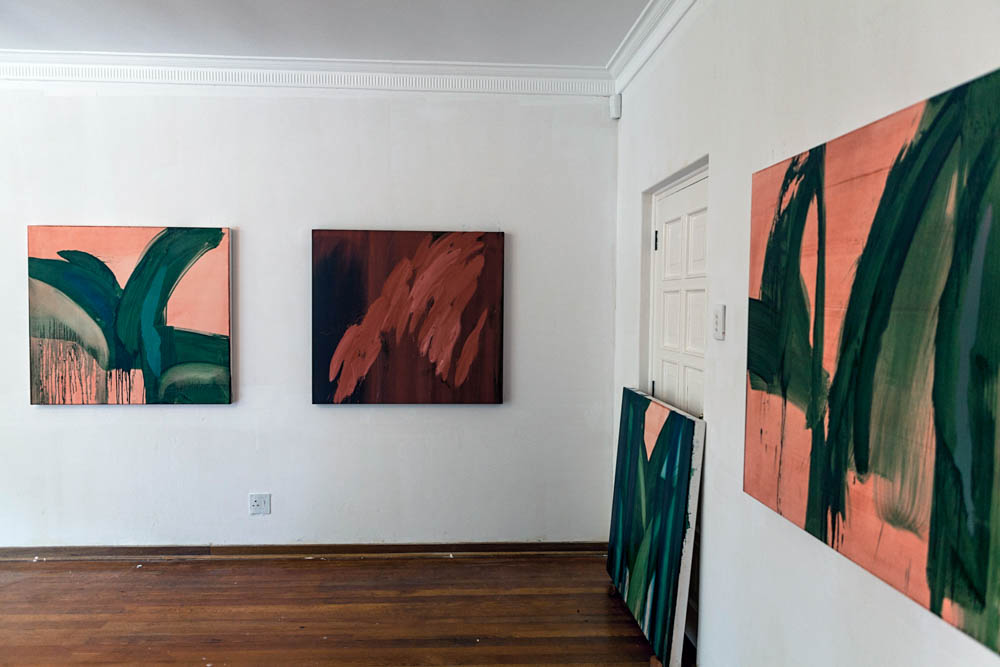 13 Feb The Villa –Bringing Exceptional Artists Together in Experimental Spaces

Posted at 12:29h in Art by Casandra Jordaan
0 Likes

What started out as a unique exchange with a property developer turned into an experimental concept that would allow South African artists to come together in unique and inspiring settings.

Jonathan Freemantle, renowned artist and co-founder of the Edinburgh International Fashion Festival, took up residence in the Four Seasons Mansion on Melville Street in Hyde Park after it was acquired by a property developer friend.

The mansion, which has since been turned into a sexy development called Hyde Park House, had been left empty and abandoned for over a year before Jonathan brought a unique suggestion to the table.

In exchange for moving into the mansion and being a short-term caretaker, Jonathan would leave an artwork behind. Along with getting a 6 bedroom mansion all to himself, Jonathan was able to work in a space that would give him the breathing room he needs during the heat of production. When a slowdown in sales delayed demolition, Jonathan ended up spending 18 months in a dream mansion, which lead to the birth of The Villa.

During his time at The Villa, Jonathan invited fellow artists to join him as residents, giving them the opportunity to freely express themselves in an interesting space that was set to be bulldozed as soon as the go-ahead was given.

Some of the artists that took up residence at The Villa included Givan Lotz, Io Makandal, Lucy Turpin, Michele Mathison, Rodan Kane Hart, Michael MacGarry, Jacob Van Schalkwyk and Marc Edwards to name but a few, all of whom were deeply immersed in their own projects.

“The Villa gave me three months of time and space to commit the perfect crime. Within the span of a week, a sunny upstairs master bedroom decayed into a swampy dislocation. The outside garden seeped in as my insides continued to spill out.” Givan Lotz

Jonathan spent most of his time at The Villa working on a body of work titled The Oldest Mountain, which was exhibited at Gallery MOMO.

To bring their time at The Villa to a close in style, Jonathan organised a wild and free exhibition, which included a 5-course dinner that was served to about 80 guests. To bring the exhibition to life, a select group of artists was invited to install their work throughout The Villa, including the gardens.

“Living in Johannesburg, has for me, required a continuous process of finding unexpected and unconventional ways to disrupt the monotonous humdrum that the city can occasionally exude. The Villa exhibition, curated by my dear friend Jonathan Freemantle in September 2018, was one such magical instance where all the ideal ingredients combined to formulate an unforgettable show and opening party. Spring time in Joburg arrives with stardust and jacaranda petals in the crisp air. A selection of beautifully considered works installed in the abandoned, soon to be demolished mansion, felt like a palette cleanser to the often formulaic ways art is presented, but more so the evening felt almost ceremonial, as the space glittered for one last pirouette – a perfect setting for memory to outlast the physical space.” Brett Rubin

Following the highly-successful event, Jonathan decided that The Villa should become a moveable feast, allowing artists to take up residence in similar spaces across the globe. Even though the concept is still in the planning phase, there is already talk of a Scottish Castle and a beach house in Malibu.