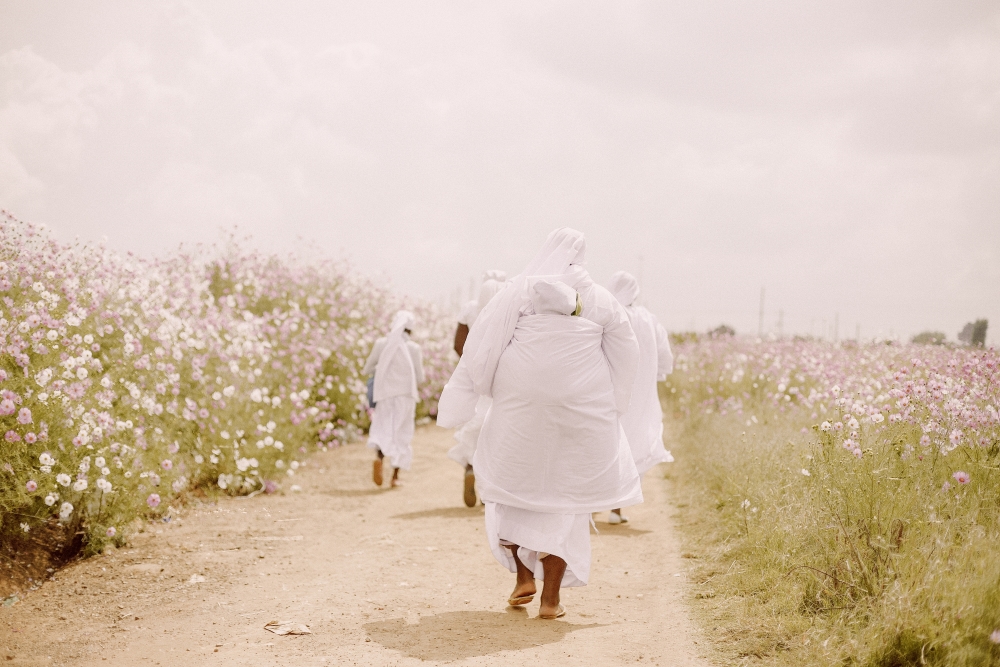 Obakeng Molepe is a commercial, fashion, portraiture and documentary photographer who uses his work to get people to question the status quo and society in general.

Obakeng has been working as a photographer since 2014 and his work has been featured in publications such as New York’s Desundo Magazine as well as ELLE. He also spent time working on a Black Panther-based project for Marvel.

Along with creating images that question what society deems beautiful, his work also has a strong focus on masculinity, gender roles and religion.

Here are the stories behind some of his best images.

On 30 March 2018, I was in Sebokeng for Good Friday. As I was having my cigarette, I realised that people were waking up early, spending money and traveling distances to celebrate this day. Being the nihilist I was, I found it ridiculous that people would go through so much for something as intangible as “faith”, but as an artist, I also found this alluring. People were doing all of this for something they have never seen or touched, for an after life that isn’t even guaranteed. Ever since then, I have been capturing different forms of religion and faith.

I have been very open about my depression and mental health. I love this image because of how it depicts my struggle with and the beauty of depression. I chose the name “Ferry” because the series portrays what it feels like to be in between worlds or two destinations, between true reality and that of the mind. It portrays the pain, the overthinking, the distorted reality in my head and most importantly the fear. I got to work with my closest friend, Sakhile Cebekhulu, to get this shot. At first it was a bit weird for him but the moment I explained what I was trying to create, he understood that I needed him to be vulnerable.

After my friend and neighbour Lesedi moved, I made a new friend by the name of Ofentse. Like most of my friends he wasn’t as well off as I was (or as well off as I thought I was). In being young and naive, I thought I had it all figured out. The wolf in sheep’s clothing, materialism, revealed itself for the first time. The filter was lifted and I witnessed materialism and money take the shape of love. This beast fed off my human greed, fear and most importantly the need to find meaning.

It’s easy to understand why people feel the need to spend money, it
is a filter or a beautiful illusion, but unlike other illusions, money and materials are actually tangible. It’s easy to compare yourself to others who have less than you, both financially or materialistically. Systems and constructs like religion, capitalism and tribalism all have one thing in common, they blind us to humanity. According to this system, when you have more money, you are deemed better than people with less – materialism in love’s skin.

Anyone who follows my work knows that I am constantly questioning humanity and its man-made constructs such as time, religion and gender. I was sitting observing the world, looking at people moving up and down, when I remembered that we are born fumbling for meaning and purpose, and sometimes we find ourselves lost.

To me, this picture provides direction, narrowing down the idea that “I still need to find who I am in this world” to “I need to find out who I am to me”. Most importantly it provides a route, a route that is being devoured by nature and other forms of life, once again proving that it doesn’t matter what your purpose is, it does not matter what we plan or what we construct, life is just going to devour us. Just like we exist decades after others have been devoured, we’re also going to be forgotten and someone else will have to try and travel this same road.

This is by far my favourite fashion project, not only because of the outcome but because of the team I worked with. From my partner in crime Neo Serati, to my partner in depression, Yonela Bonke. I got to work with people who are as instinctive as I am. It felt like the most beautiful thing I have ever experienced on set.