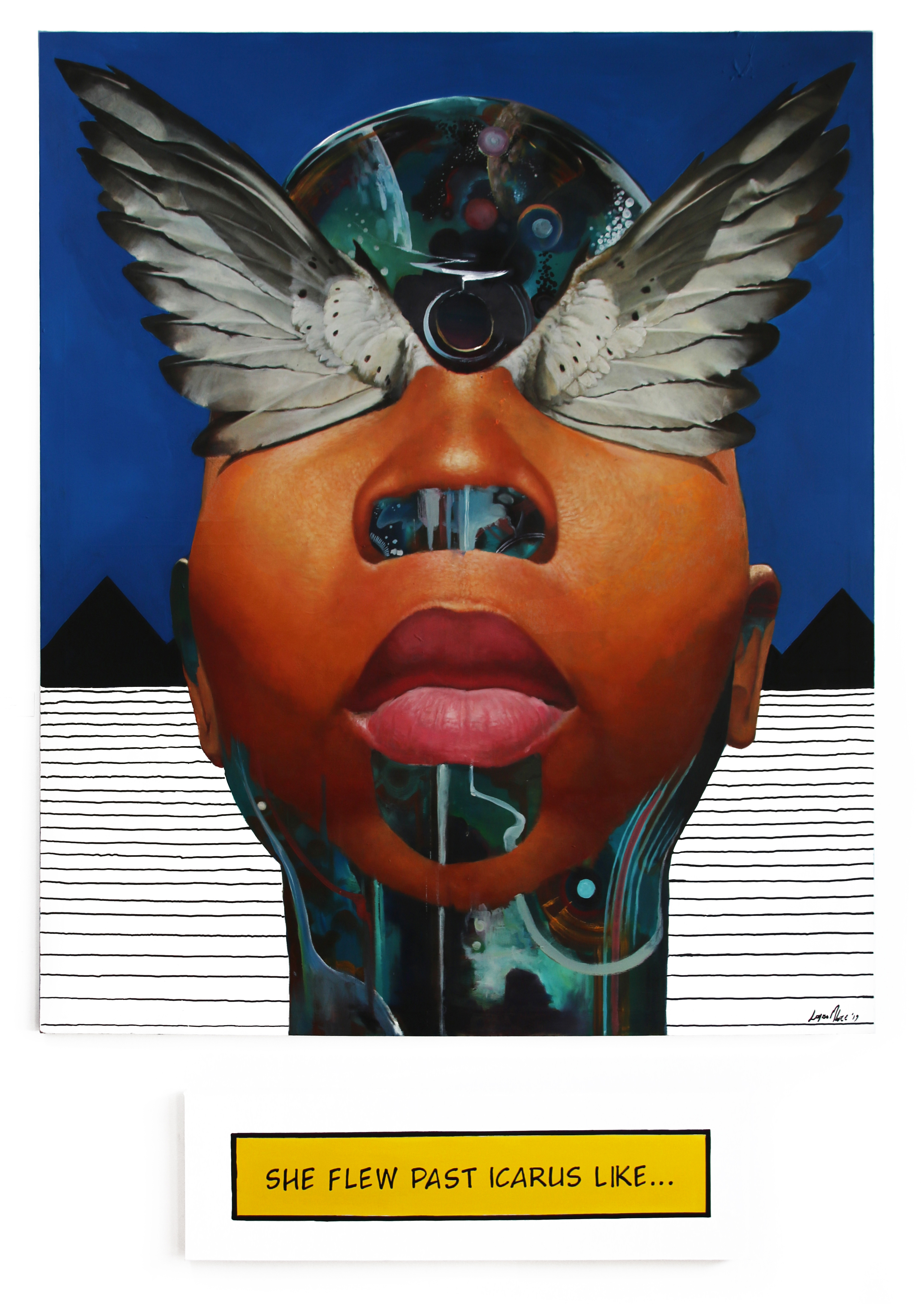 Loyiso Mkize is one of South Africa’s best-known graphic novel and comic book illustrators, being one of the foremost contributors to the Sunday Times supplement SupaStrikers.  He turns to painting for creative expression and as an avenue for his personal, political and social commentary. The paintings often depict expressive faces, focusing his work in portraiture because of his fascination with skin, texture and the emotion that is conveyed through facial features – notions of the soul, the spirit and ultimately to illustrate his understandings of the true African experience in the contemporary art world.

Mkize’s use of highly stylized and technically brilliant brushwork creates realistic imagery that leans toward the surreal with his decorative framing and imaginative illustration, adding multiple layers to each portrait with character references and the impression of self-awareness in each of his works.

The comic book quickly rose to popularity with new episodes being published in steady succession. The obvious remedy to meet with the demand as well as extend availability nationwide was to partner with David Phillip publishers.

Loyiso Mkize Art subsequently developed projects such as the Earth day campaign commissioned by 702 radio and Cape Talk FM in 2014. The company would later develop an entrepreneurship awareness comic book titled Young Hustla for an entrepreneurial training and facilitating company. Most notable was the anti-bullying comic book commissioned by the American comic book company, Archie comics, which was developed and published in the USA in late 2015.

Having discovered late in his life that he had a passion for portrait painting, this artistic expression has grown over the years with great success. Painting has become a tool that Loyiso uses to document and express views and ideas. He generally paints with oils on canvas and his subjects tend to explore the complex nature that makes up the modern African man, his environment, predisposition and culture.

Mkize focuses on the emotion, emphasizing brush strokes on skin texture and the eyes. Finding the subject’s spirit and communicating that through the medium is an effort that he has found his voice in. His ability to create visual art throughout the varied arenas he participates in, carries with it an intention to communicate ideas that he finds most important in his life, the most prominent of which is preserving the African identity. His life work embodies the message of self-awareness, acknowledgment, strength and radical presence. It is in this spirit that Loyiso hopes his work can create a platform in which all can communicate freely.