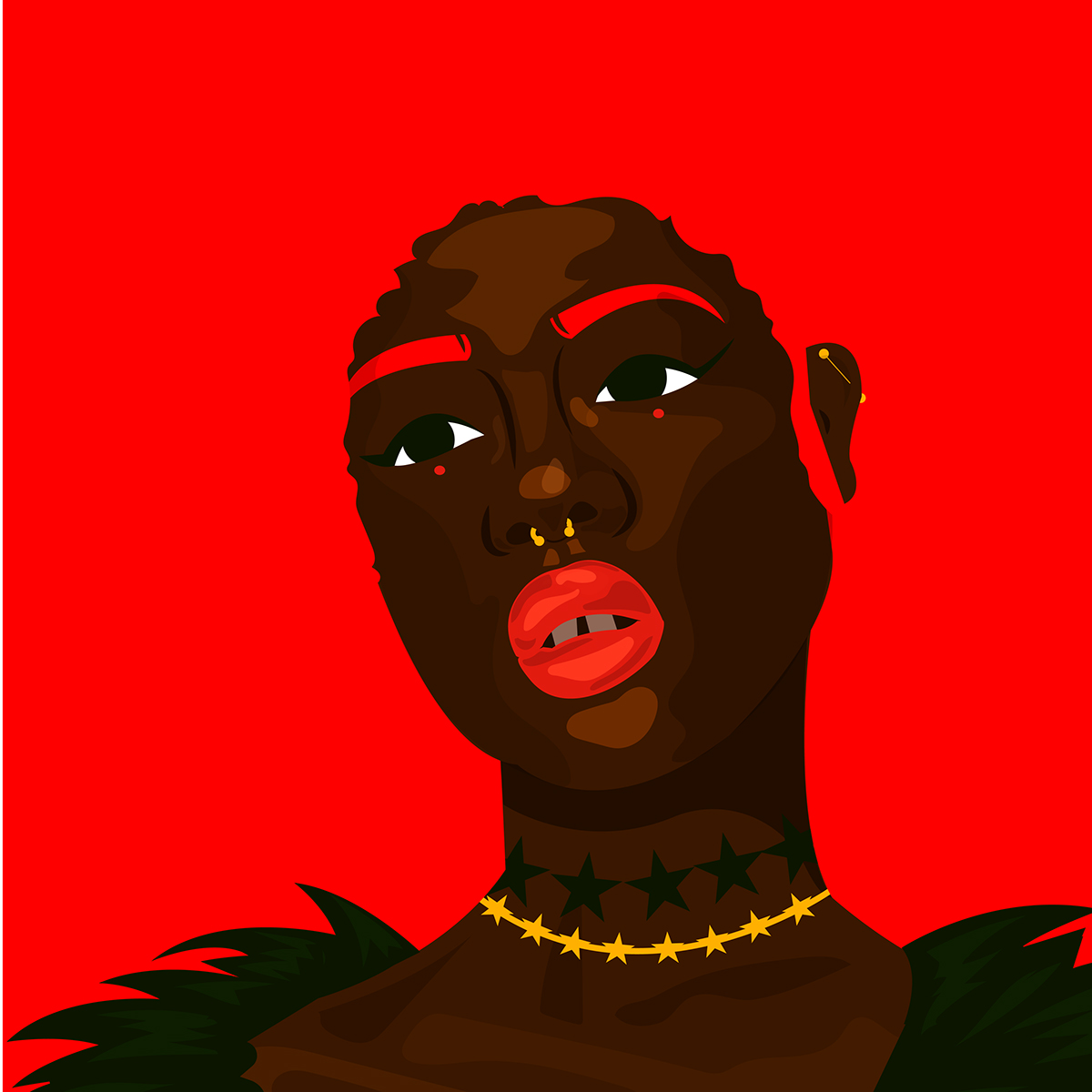 Posted at 08:30h in 10and5, Art, Beauty, Digital Art, Freelance, Illustration, Social Contract, Social Media, Something Else by
0 Likes

Kgabo Mametja, better known as Saint Rose on Instagram, recently shared her favorite illustrations with us. The images all have a very sultry appeal to them. Her feminine interpretation of beauty and aesthetics translate into bold images that blur the lines between traditional taboos and her intrinsic essence. In each image she celebrates inclusivity, womanhood and its many nuances.

This image is part of a series I did on bisexual lighting, which is an actual term used to describe that sultry pink and purple lighting technique, WILD. A lot of my work has to do with celebrating the different nuances that come with being a black woman and this piece is no different. This series is also big on body positivity; it’s really about celebrating sexiness. I’ve really been getting into conversation around sex and how women experience pleasure. This series was a result of these conversations. I, specifically, love this piece because she’s standing proud in her body and that’s her sexy superpower.

This is a piece I did for an exhibition by Mpumi Mayisa (@mpumi_dee) called “An ode to the Women” which was hosted at Urban Mosadi Studios (@urbanmosadi_online). I’ve found that a lot of the pieces that I like look a bit lonely, she definitely looks a bit lonely. She’s also looks a little content. It’s like the “sad-girl manifesto”. I like this because she looks cool as f**k, but she’s just as lonely, like she’s longing for something. This piece is part of a series of three images.  The first piece was “Cigarettes”, a depiction about my battle with anxiety. The second piece in the series was “Sex”, a depiction about my feelings around sex and intimacy at the time, then, finally, there’s this one “Instagram.” Honestly, this piece has to do with existing in a world where you’re constantly performing, but aren’t really seen.

Haha, this is my very small contribution to revisionist history. This piece is called “The Red Pill” because that’s the pill that opens your eyes and shows you the truth in the film The Matrix. If you know me, you know that I have an unhealthy love for George Lois and the old Esquire magazine covers that he art directed. So, because the Universe is comical in every sense possible, I stumbled upon a book with all of these Amazing Esquire covers and George Lois explaining the rational behind each cover. I then found a cover that was an ode to Elizabeth Taylor as Cleopatra, I think white-washing is gross, so I flipped it and told a truth.

Yayoi Kusama is a Japanese artist who has been around for a long time, but has recently gained popularity among ‘millennials’ because of her Infinite Mirror Rooms exhibition. The reason I illustrated her was because I featured her in my newsletter Show & Tell, keep an eye on my Instagram for updates, its basically me finding and sharing things that I find cool. My second edition was themed around obsession and it featured a part about Yayoi and her amazing work. I’m obsessed with her and she’s obsessed with dots. I love this piece because of the colours and how the structures background compliments the free flowing face area.

I like this piece because I like the faces, I like that Lisa Simpson is in there and I love that it’s about inclusive feminism. I also really like that it’s about community and ‘togetherness’. I rarely illustrate pieces where there’s more than one person in a piece so it’s special to me.

I love this piece because it’s really just me being a fan-girl. This is an incredibly simplified and unworthy response to one of my favourite pieces by Frida Kahlo called What I Saw In The Water. I find a lot of strength in this artist’s work and in her story. In this piece she depicted moments from her life and it’s the ultimate self-portrait, if you ask me. Her living those moments is now the reason why so many women look up to her.

I did this when I found out about the Luxury Tax on anything period related. I’ve always known that Pink Tax is a real thing, but come on! This was a bit of a protest piece. In it everything but the tampon looks luxurious, because everything but the tampon can be as luxurious as it wants to be. I’m happy to report back and say that period products are now tax-free, they are still ridiculously priced, but at least now the government doesn’t fine you for being a woman.

I love this because Rihanna is amazing and she looked incredible in the “Lemon” video, even though she was there for all of two seconds. It was the first piece where I played with lighting and layers.

This should have been described as a colour study. I love this red and how it compliments her brown skin, and the green fur. I also really love the negative space. This was a time where I was playing a lot. I wasn’t really trying to do a specific thing.

The more I look at this piece, the more it feels like a self-portrait. I illustrated this piece at a very weird and emotional time. It plays back to loneliness and feelings of being stuck. It’s a representation of where I was at that time and that’s why I love it.