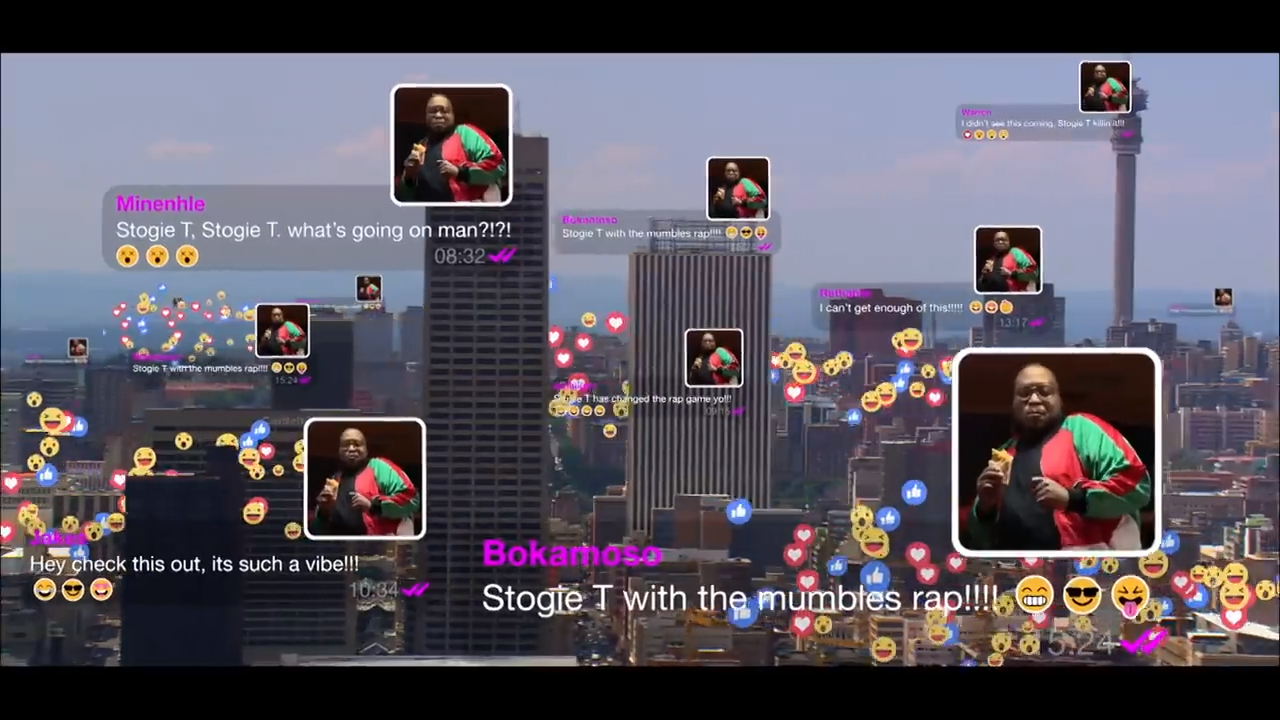 Three years ago, veteran rapper Stogie T, formerly known as ‘Tumi and the Volume’, consciously decided to try a different style of music and write the kind of songs he would never have written as part of the group. Since then, he has given enthusiasts his self-titled album, Stogie T and more recently the Honey and Pain project that features a collection of beats and lyrics in a 14-minute song, God’s Eye.

His most recent creation is the new mumble rap song titled “Original Recipe Freestyle”. He worked in collaboration with fast-food giant, KFC to commemorate the brand’s new meal-offering, showcasing how #TheWrapGameHasChanged. The unusual drop was quickly followed by a viral ad featuring the rap maven. The advert, also features rapper, actress and media personality, Boity, who has been making serious waves in the local hip-hop scene since the debut of her hit single “Wuz Dat?” and follow up smash “Bakae”, together with television personality, Scoop Makhathini and rapper Touchline.

He worked with Truhitz on production and wrote the song with Adilson ‘Ason’ Sitoe. The song is true to the form of the mumble wave by using catchy lines and emanating that good vibe. Stogie dropped the song on Twitter and it’s now available on iTunes and Spotify. According to the social media platform, tweeps are loving the song, with some questioning his new musical direction; while some fans were more forgiving as the OG threw a couple of bars that appeased his core following. Listen to it and decide for yourself.

“This sound is new for me but I am all about expanding what I can still do as a rapper. I appreciate the love the fam has been showing me; in the streets, at gigs, on all my projects, and on social media. It’s an exciting time in local hip hop; from the music aspect, brand associations, and the lifestyle we live and breathe as fans of the culture. I can’t wait to see what happens next.”

It’s the kind of song you can bump in the club or get down to in your car or as the soundtrack to the latest Wrapsta box meal TVC from KFC. In the song, Stogie still delivers killer verses as he raps: “A nigga went and changed names/Got paid paid cuz the game ain’t changing/I am that taste maker that made bacon/That rare make, rap great/Y’all just take take cut and paste/Flakey as a puff pastry.”

He goes on to talk about how things were when he first started in the rap game, where he subsisted on crumbs but, looking at where he’s at now, things have changed. This links back to the re-invention of Boitumelo Molekane. The new ad sees Stogie in studio lacing a new track, snacking on the new KFC Wrapsta Box while his crew records the sessions and shares on social media, turning the veteran’s studio session into a viral sensation –highlighting the speed and ubiquity of social media, while emphasising how #TheWrapGameHasChanged. After Stogie T takes a bite of his wrap, he becomes a phenomenon, and amazingly shrugs off his new-found notoriety by choosing to keep it real.