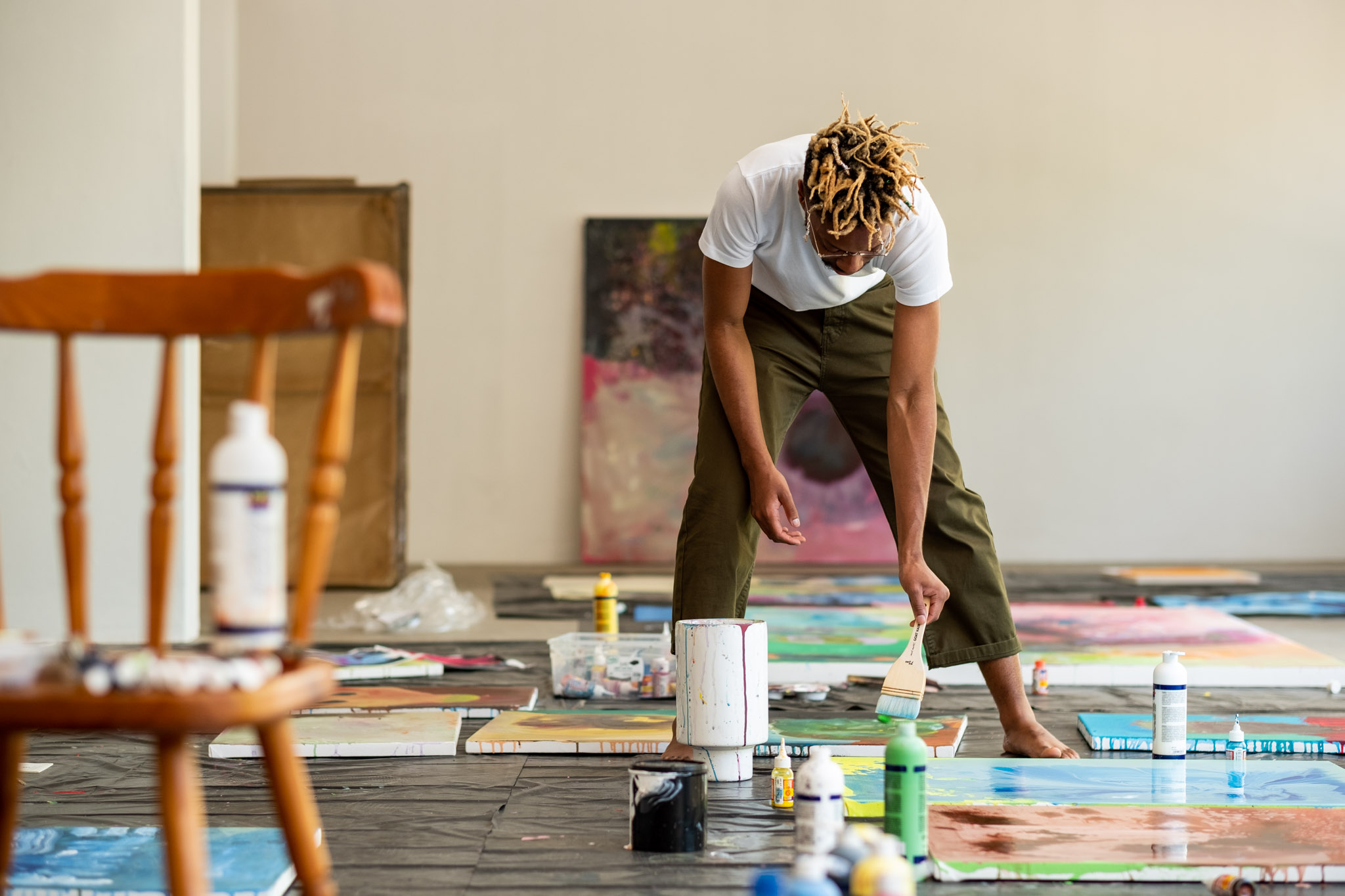 Posted at 10:30h in Art, exhibition by Tyrone Fisher
0 Likes

Banele Khoza is currently running an art exhibition titled Seeking Love. The Exhibition opened in Johannesburg on the 22nd of May, it is now travelling to Port Elizabeth, Bloemfontein, Stellenbosch, Pretoria and will end in Durban on the 21st of June.

“This exhibition is an open love letter to whoever is watching or reading my work – also to God/All/The universe. I am confessing that I am ready, and I am letting go of the search,” says Khoza. “Beginning the body of work was a little hard to be honest, especially having created a body of work in 2017-18 that ended up being showcased in institutions that I did not imagine would happen in my lifetime. However, I had to ground myself in everyday practice.”

That meant bringing in his muses from the past and newly encountered ones: Lehlonolo Ramathe, Lerato Masters, Francis Buseko and Sandile Mhlongo. They sat for different pieces over a period of 4 months and became the foundation of his ideas and inspiration.

The finished collection of works reflects that inspiration but also the complex nature of love, how important it is to acknowledge the heart’s desires and also to learn self-love – which he wants people to walk away from the exhibition thinking about.

Learning new things with you by Banele Khoza

Behind Closed Doors by Banele Khoza

Protecting Myself by Banele Khoza

“Love is a desire we all share; however, a lot of people will not admit that they are seeking a loving relationship. I love the idea of love and do wish for romantic love. I guess honesty is what I am also putting forward for people to be in better relationships with themselves and others,” he says.

Seeking Love builds on the impressive portfolio and reputation that Khoza has built in his short life. He was born in 1994 in the small town of Hlatikulu in Swaziland (now eSwatini) but moved to South Africa for schooling in 2008. He then enrolled at the London School of Fashion to study for a year in 2011, following which he came back to South Africa to study a National Diploma in Fine Art at the Tshwane University of Technology (TUT).

After completing a BTech in Fine Art, Khoza became a lecturer in Drawing and Art Theory at his alma mater, while continuing to hone his craft. In September 2017, he won the Absa L’Atelier Gerard Sekoto Award for his series Note Making and along with it a three-month residency at the Cité Internationale des Arts in Paris.

It served as a springboard for his career and he has headlined a number of exhibitions, including Temporary Feelings at the Pretoria Art Museum in 2016 and Lonely Nights at Lizamore & Associates in Johannesburg in 2017.

As his star continued to rise, in 2018 he made the choice to leave his post as a lecturer at TUT and he has focused on pursuing a career as a full-time artist. Now as he is focusing on his art full-time, he brings us the Seeking Love exhibition.

The exhibition is supported by Absa, Alliance Français and BKhz.

I thought I had met my soulmate by Banele Khoza