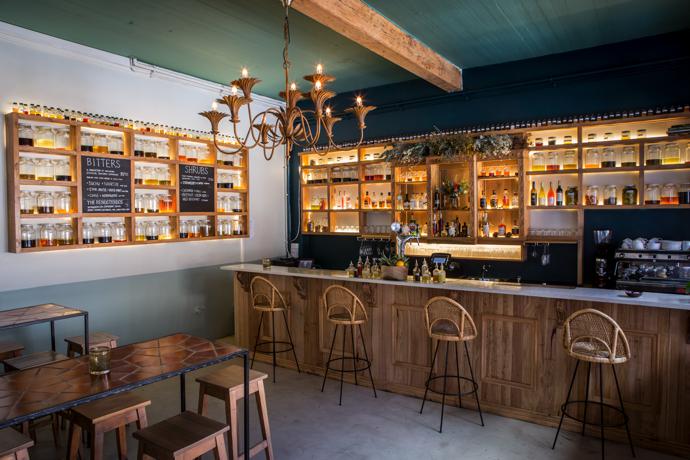 28 May 10 Ways Bar Culture is Being Re-imaged

Join us as Jessica Spiro takes us through 10 ways that Bar culture is currently being re-imaged:

The bar concept is nothing new. Having been around at least since the early 19th century, a bar is and always has been the spot for you to settle down with a tasty drink. And yet, it’s a concept that constantly regenerates and reinvents itself. Over the last couple of years, in particular, there’s been a quiet, albeit consistent rebirth of the bar culture. 2019 is set to be a remarkable year for the hospitality industry, and possibly even more so for the bar industry. We’re taking a look at some of the ways that modern bar culture is being re-imagined.

With the conscious consumption movement gaining momentum in all aspects of food and drinks, it’s no surprise that the bar industry has seen this filter in. More than ever, local spirits and ingredients are being used. South Africa, in particular, has had an explosion of local distilleries, most of whom are making the most of local and indigenous produce. Lucy Beard, co-owner of Hope on Hopkins in Cape Town said: “Provenance is becoming increasingly important in the food and drinks industry and the growing focus on local has seen the emergence of bars celebrating and sourcing locally-made spirits, which highlight botanicals and flavours from the immediate area.” It’s also a sign of an industry that caters well to tourists, because trying new and foreign ingredients is what travel is all about. Melbourne-based bar operator Luke Whearty (who, along with Aki Nishikura, is the brains behind famed Operation Dagger in Singapore as well as soon-to-be-opened Byrdi in Melbourne’s CBD) echoes this sentiment: “The thing I love about travelling to a new destination is being introduced to something that I haven’t tried before and getting an idea of why it’s different to other parts of the world.” Johannesburg bar, Mootee, is nailing this concept with their focus on promoting South African history through their menu that includes traditional recipes with a modern twist.

Similarly, bartenders and mixologists are putting their chefs’ hats on and are creating their own tinctures, bitters and cordials, often with these specific, local ingredients. Cape Town’s newest watering hole, The Botanical Bar, has an already-famous back wall, lined with their own bitters and shrubs made from an ever-changing range of seasonal produce.

If we look at how the humble gin and tonic has transformed from being your granny’s tipple of choice to a drink that launched a thousand specialised experiences from bars, to hotels to ice lolly and cake flavours, it’s safe to say that the classics are back with a bang. And with the re-emergence of gin as a “cool” drink, the floodgates have opened and nearly every old school drink is cool once more – with perhaps a modern spin. The iconic Aperol Spritz, the Old Fashioned and the Negroni are just a few examples of cocktails being seen and drunk everywhere. It’s likely they’ve come back into fashion because they move away from the garish, overly-sugary concoctions of the noughties aimed mostly at women. Cape Town-based bartender and beverage consultant Peter Lebese (aka “Thee Gintleman”) credits this to the craft of the bartenders: “We’re paying more attention to what spirits being used as well as the story telling of the drink experience.” And, more than ever they’re paying respects to the classics. Courtney Lawson-Peck, bartender at Cape Town’s House of Machines says: “modern bar industry is about being new and inventive, while not forgetting the classics.” Now, cocktails are cool, considered and inclusive.

“Experiences, not things” seems to be the millennial slogan and that sentiment extends into drinking habits at bars. While there’s still very much space for the “pop in for one drink after work” bar, there is a growing movement towards bars encouraging guests to think beyond “just one drink”. Curated cocktail and food menus such as that done at Cause and Effect in Cape Town, and at the famous Aviary in Chicago are becoming a popular way to spend an evening. Essentially, bars are allowing guests to appreciate and enjoy cocktails in the same way they would wine. On a larger scale, Captain Morgan has gone above and beyond with their most recent interpretation of ‘experience’ by creating a subterranean lagoon in London. Inspired by the swashbuckling captain’s adventures, guests make their way along by boat, sipping on Captain Morgan cocktails, ultimately ending at an island-themed party.

As the movement towards conscious consumption grows in popularity, it’s beginning to show in the drinks industry too. And as local ingredients are being championed more and more, a new found respect has been created for the environment and seasons. The thought process here is to reduce shipping in foreign produce in and instead use what is available, meaning that bartenders are making the most of what is in season in interesting ways. Sin + Tax in Johannesburg are most known for embracing this and famously come out with a refreshed menu at the change of every season.

Perhaps a hangover from the experiential trend, bar snacks have become an entity all their own. Gone are the days of peanuts and sad bowls of crisps, now bars are developing clever snacks and small plates that complement their drinks menu. Once again, The Aviary in Chicago leads the way with their tasting menu of cocktails and food, but even Dandelyan (closed in 2018) in London, the most recent winner of the best bar in the world award, has a snacks menu as enticing as their drinks.

Previously, non-drinkers were notoriously excluded from bar spaces and when they weren’t, there wasn’t much for them to drink. Bar tenders had to fashion something up out of soda water, fruit and perhaps a cordial. It’s estimated that the average British resident drank 40% less in 2018 than they did in 2004, and as sober curiosity becomes less of a taboo subject, producers are starting to cater to it. Seedlip, the world’s first non-alcoholic distilled spirit has all the qualities we seek in liquor, without any of the after-effects. In South Africa, The Duchess is notably the country’s first virgin gin and tonic, distilled and made according to gin standards, bar the alcohol content.

Move over gin, there’s a new spirit (or spirits) in town

Following on from the gin craze, there’s a growing interest in previously overlooked spirits such as rum, brandy, vodka, whiskey and even vermouth and local versions of tequila. As with gin, many South African distillers are producing locals versions, and they’re being used in refreshing, interesting ways. Courtney Lawson-Peck, in particular, is a fan: “4th Rabbit [mezcal] and Leonista tequila are just two examples of local brands that are making a huge impact. And I expect to see a lot more of this in 2019.” Along with 4th Rabbit mezcal, famed winemaker Adi Badenhorst has created vermouth-inspired Caperitif and local distiller Andre Pienaar of Pienaar & Son has expanded from gin to include vodka, and is currently casking whiskey.

Sustainability and zero-waste being championed

The zero-waste movement is certainly nothing new to the hospitality industry, and as such, has comfortably made its way into bars too. Once a hotbed of waste (owing to the number of cans and plastic used and discarded), bars are leading the way in reducing their impact on the environment. During the throes of the Western Cape’s drought, it was remarkable to see how many bars came up with innovative ways to reduce their water consumption. Cause and Effect, off Kloof Street in Cape Town, for example, became one of the first bars to install a high-tech water system that essentially produced water from the water molecules in air. They also make sure to use every scrap of fruit for drinks, from root right through to tip. Hope on Hopkins’ Lucy Beard agrees that this also goes hand-in-hand with the increased use of local spirits: “In Cape Town there is a growing number of bars aiming to source everything from local, small scale producers and many of these bars are developing unique cocktails capturing a range of very local flavours.”

Anything (and everything) goes

Something that has been a growing marker of the culture surrounding bars is that the industry is made up of an interesting mix of any and every kind of bar. Luke Whearty told us: “I think modern bar culture is a conglomerate of so many things, which is exactly what makes bartending today so interesting.” Additionally, the bar you drink at is no longer limited to your income or social situation. Be it glossy, high-end hotel bars, dive bars or even the humble pub, there really is a sentiment that as long as you’re doing it well and authentically, anything goes, really.

Bottled cocktails are back

Hear us out, we know that “bottled cocktail” likely makes you think of those dreadful, unbalanced and sickly-sweet premixes in tins. Now, bottled cocktails have had a facelift and they’re easily more delicious – and cooler – than ever before. The idea here is that you’re able to sit down at your favourite bar (or even a bar in another city you’re visiting), drink a cocktail they’re well-known for and be able to take it home to enjoy later. It’s a perfectly-mixed cocktail, without any work required from you. This is something that’s seen huge popularity in Australia, in particular, where bars like The Everleigh and Bar Liberty in Melbourne have created a small offering of their bottled cocktails.

Bartending as a lifelong career

Something that has truly stood out as a modern reimagining of bar culture is that it’s finally being respected as a serious career path. Peter Lebese agrees: “Bars in South Africa are starting to look at the industry more and more as a career path. And though internationally it has been a thing for a while, in South Africa we are seeing more bars being run by the bartenders at the establishment rather simply than the owner.”  As bars and bar owners allow the personalities of bartenders to shine through – and even become the marker of the bar’s brand in some respects – it encourages bartenders to take ownership of the work they’re doing.

This article was written by Jessica Spiro.