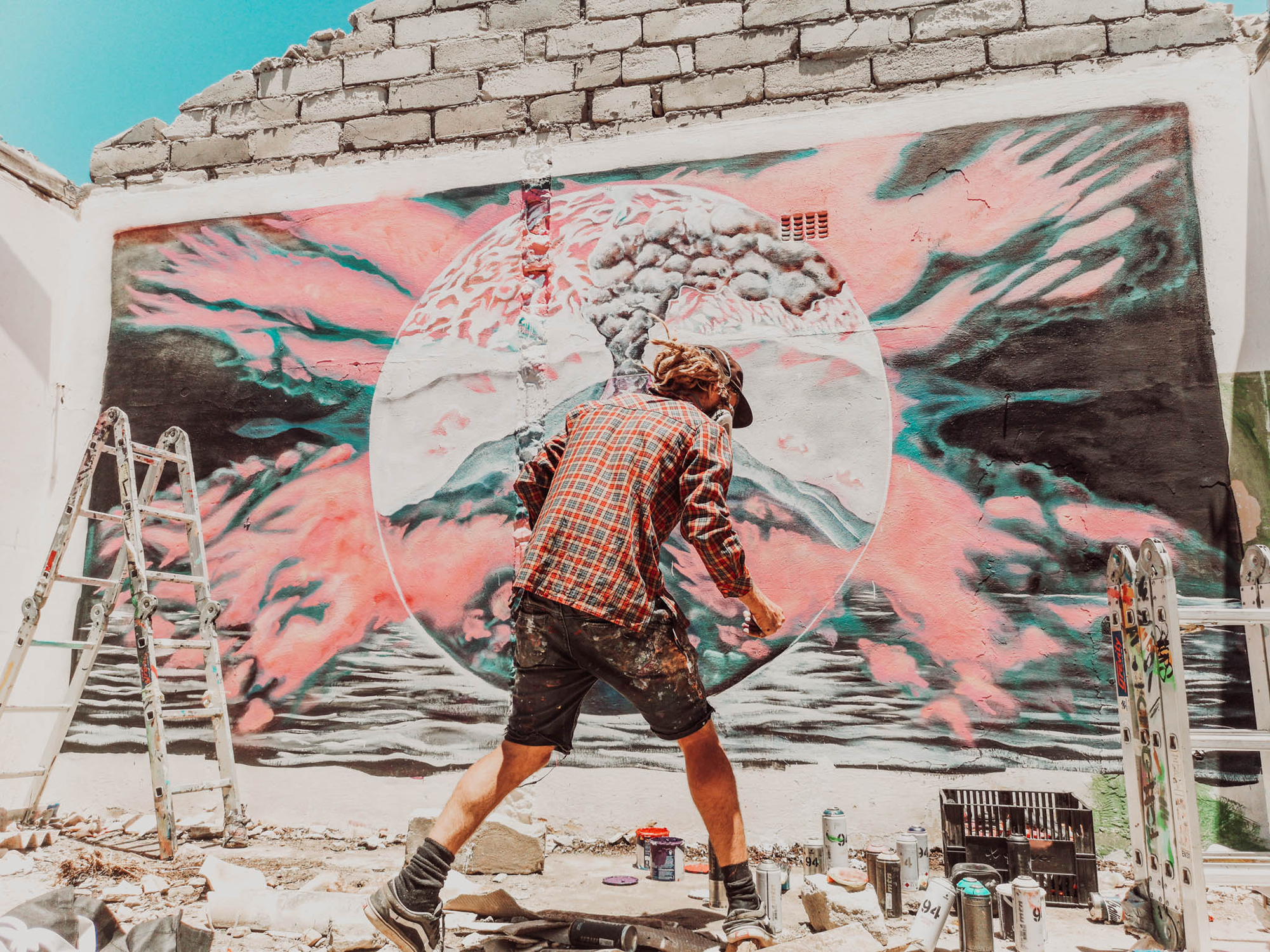 24 Jun This is Not Allowed: Four Graffiti Artists Journey up the West Coast of South Africa

Posted at 12:00h in Graffiti, Street Art by Tyrone Fisher
1 Like

In early 2019, four graffiti muralists from Cape Town set out to paint the area of Elands Bay up the West Coast of South Africa. Known commonly as a place inhabited by surfers and fishermen, the West Coast is a step back in time with abandoned buildings littering the landscape and a long history of wall painting, but up until this moment, only really in caves.

AwehMigo, LoveLeigh, FokAlles and Marti Lund intended to break free from the censorship of their art form and from the madness and distraction in the city of Cape Town. They wanted to gift spaces their skill and colour as a way of rooting themselves in their country. The mission was named ‘This is Not Allowed’.

Saturday morning dawned clear and they found themselves in the cave at Baboon Point, looking over the ocean west of Elands Bay. This is one of the many caves littering the Southern Cape coastal areas that contain the visual remnants of Khoe hunter-gatherer culture, along with their paintings and hundreds of hand prints.

These were the original creatives. Not only our cultural forefathers, but also our creative predecessors. This set the tone to creating this ode to the forefathers and mothers who first put paint on walls.

They started with a scattering of throwies, warming up to the big piece. The wind picked up and the sun baked down on their backs as the day went on. They got some heat from a local tour guide and encouragement from the local Superintendent who rang chants of praise for their art form and for how this could up the tourism of the area. He was probably the most encouraging person in town, the artists say. Considering that they were painting without permission in a highly visible space, this affirmation definitely helped keep the mood up.

In the end it was contrast that became the underlying narrative of the trip. The untouched feel of the natural environment where they painted was so incredibly contrasting to the concrete jungle. New buildings and the eternal expansion and ‘upgrading’ of the city was a long way away from the rubble and broken walls of those abandoned buildings.

The smell of the ocean was mixed with the smell of spray-paint. Two days later, and the Point was a completely new visual environment. The soft earthy, dry tones were now complemented by the bright colour on the forlorn old buildings.

Each piece was a challenge, imposed by the artists themselves. Be it size, complexity, using only local inspiration or a new approach to planning the piece. The meteor shower on the first night, the stillness of the space, the cave paintings and the surrounding dry estuaries created endless content for creation.

The final day came. With a swim in the icy ocean, a line cast, a wave ridden and a sneaky commission in exchange for board and lodging at Die Wit Mosselpot, they bid the Weskus goodbye for a return to the Mother City.

FokAlles is a cartoon and animation fanatic, and introspective time waster. FOK uses combinations of different mediums and processes to visually communicate emotion, or the lack thereof in the metaphoric post apocalyptic world that we live in today. Touching on ideas of existence and purpose, and communicating these ideas through bold lines, hyper detailed backgrounds and morbid characters.

MartiLund is a painter, specialising in large scale murals and oil on canvas. his work is guided by a consistent output of collage, both digital and analog. His full time painting practice has always been inspired by natural form, texture and the often obscure experience of creating on the road. His works are guided by story-telling and dreams, using a range of imagery to challenge ideological assumptions at the melting point of cultural,social and environmental narratives: a space where smoke meets cloud, light meets dark and imagination meets reality.

Love Leigh is a dynamic self-taught graphic designer/illustrator and graffiti artist. He has a wealth of experience in the clothing and branding fields as a graphic designer. This coupled with a consistent practice in the public space makes him a diverse creative explorer of the visual realm. He find his output in self-published zines, a constant will to draw and an exploration within his internal space. Whether it be creating fictional characters as in his recent show ‘Intergalactic Nomad’ or staying true to his letters and characters in the form of colourful cartoon style and playful flow.

AwehMigo is a multi-disciplinary designer and expressive graffiti artist whose love for painting nature and birds in particular has propelled him into a range of projects and walls. He has a free, unrefined style that is a combination of letters and characters with vibrant colour and strong linework. Working with a wide variety of brands on both commissioned artworks and design, he has managed to craft a niche of visuals and expression, always pushing the barriers of his style, narrative and geography. He is based in Cape Town, South Africa and painting where ever he can.