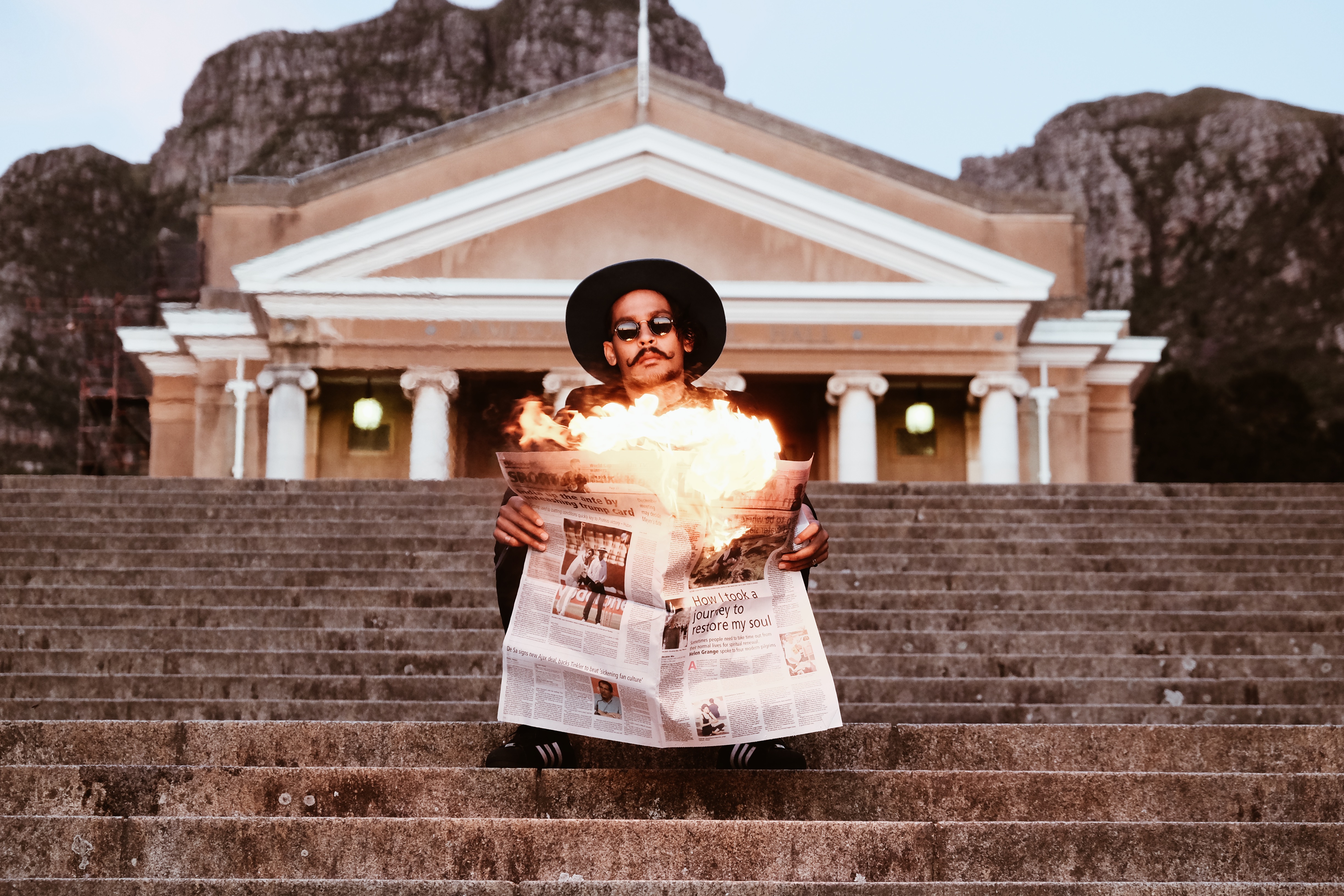 Photographer Abé Zeiler Louw recently shared some of his favorite images with us. He currently resides in Johannesburg, but as the images show, he has also spent a lot of time in the Mother City. His images reflect the impact stark contrasts and simple subject matter can have if they are captured at just the right angle. While his Instagram account is filled with his work, there’s even more to be seen at vsco.co/thelouwdown.

There’s a duality of Cape Town that isn’t as apparent in Johannesburg, where I currently live. The gap between the rich and the poor, the have and have-nots seems wider there, like a gaping hole that is collapsing in on itself, widening as it goes. This shot portrays that gap. On the right you’ve got someone leaning in confidence with a stiff hat and a crisp shirt. On the left you have a shadow, cast below the figure on the right, non-descript, limp wristed, on its way down to anywhere.

When my twin brother Zach didn’t live so far away, we would occasionally wander around the Seapoint promenade in the morning in search of some interesting shots. Once the heat crescendoed, we would cool off by leaping into the Seapoint pools. We enjoyed the quiet, faintly hearing the distant crash of waves, local chatter and gentle lap of water nearby. I took this photo of him before he left. I clambered up to the top diving board, leaning over to capture this from a birds eye view.
Now having lived in a different city for a few years, this picture sums up how I feel sometimes without him. There’s a sense of loneliness, an icy blue expanse, but at the same time there is power, individuality and confidence.

I took this portrait of Imraan Christian before the student protests at UCT. It is oddly foreshadowing. A few months later, he became the voice and eyes of the protest movement through his photographs of protesters, victims and perpetrators. His images plastered the front page of newspapers and articles across the country. Like this photograph, Imraan, through his work, was both a flint and flame that inspired thousands to take to the streets and stand up.
I took this photo on the “Jammie Steps” at UCT, in front of the colossal Jameson Hall. A single man, a single image, in the shadow of a large institution can light up imagination and action.

Diza Park is a set of apartment blocks in Vredehoek, Cape Town, towering over the City Bowl. I imagine them as three old weathered guardians, protecting the city from the wind and fog that glides down and over the mountains at speed. They were built in the 1960’s, coinciding with the beginning rumblings of South African anti-apartheid movements and an economic boom.
Although the buildings haven’t changed, their inhabitants have. There was something interesting about this place, so myself and a few friends got together to do a collaboration with a young creative collective at the time called Dark Fased.
The figures, slightly out of focus, move the eye between foreground and background, replicating the movement, vitality and energy so inherent in today’s youth. Just as the figures, levitating above the asphalt, are grounded by their shadows, the buildings, forged into a new era, are grounded by their past.

My family has roots in Zimbabwe. When the economy collapsed in the early 2000’s some of them immigrated to South Africa, leaving friends, family and memories behind. My cousin Laura was born in Zim but grew up in South Africa her whole life. Her portrait touches on identity.
The entangled foliage of a Monstera Deliciousa in the background of this manicured garden in Zimbabwe tells a similar story. The plant hails from the rain forests of Southern Mexico and Central America, somehow finding its way here, settling it’s roots deep in the soil. Thriving.