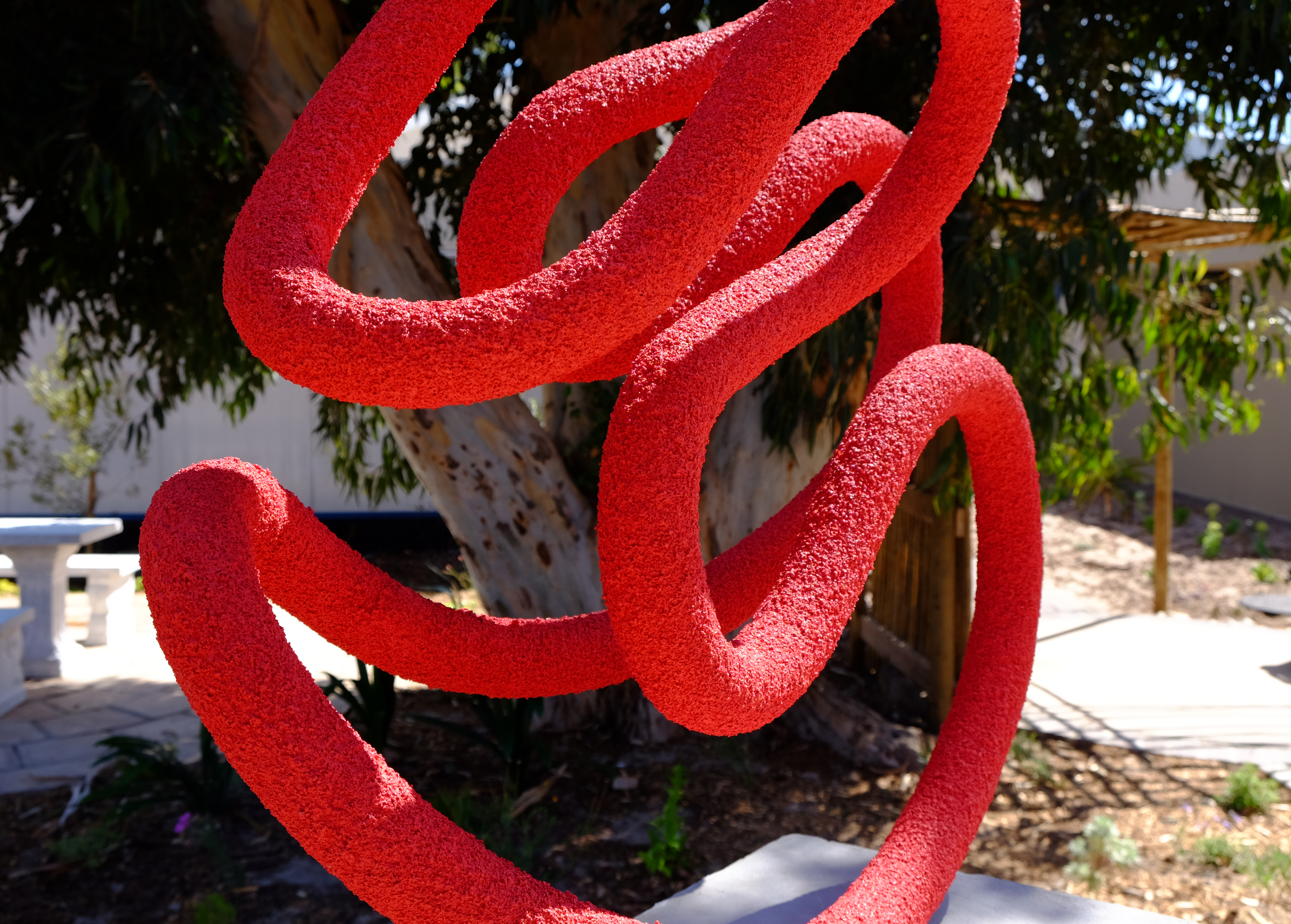 Multi-disciplinary artist David Brits, recently revealed his first public sculpture at the new Aerobiology TB Research Facility at the Desmond Tutu HIV Foundation in Masiphumelele, an area close to where the artists grew up, and a community close to his heart.

The sculpture, titled ‘Ourobus (Red Edge)’, explores shape, symmetry, scale and embraces a series of dynamic curves. The patterns present in the sculpture resemble both the AIDS ribbon and the double-helix structure of DNA. Both symbolise, and are closely linked, to both the human body as well as the neutral world. The title refers to the Ourobos, the ancient symbol of a snake devouring its tail – a reference evident in the sculpture as it is an image without beginning or end.

David mentions that “the sculpture explores pattern as the basis for understanding, and seeing pattern is something which happens in the mind. You can see things with your mind that you cannot see with your eyes alone. Constantly recreating itself, the sculpture goes to the essence of what it means to see and perceive. It makes us aware of the great patterns of which we are part [of].”

Brits’ inventive model practice lies at the crossing point between art, 3D technology and leaps forward in current material procedures. It is the result of three years of artistic exploration, prototyping and research in which the craftsman has transformed a series of illustrations into figure. Before arriving at these structures, Brits scanned his two-dimensional themes into 3D design programming, giving the outlined shapes three measurements, then skilfully extrudes and controls them, making complex endless loops.

Brits’ eye-catching sculpture, as described by Githa Maralack of the Desmond Tutu HIV Foundation “truly resonates with our work here, which is striving to impact both research and treatment relating to HIV and TB from within the community of Masiphumelele, rippling out to the wider world. There is no doubt in my mind that individuals leave our centre having not only information highlighting the work that takes place here but a memory ‘stamp’ of the Ouroboros sculpture to encapsulate their whole experience with us.”

The Desmond Tutu HIV Foundation’s new front line R10 million Aerobiology TB Research Facility is devoted to examining the transmission of TB among the twenty-three thousand inhabitants of Masiphumelele. Opened by the Vice-Chancellor of the University of Cape Town (UCT), Professor Mamokgethi Phakeng, the structure houses universally prestigious UCT analysts and researchers. Their examination forms part of  an enormous scale TB project in collaboration with UCT’s Institute of Infectious Disease and Molecular Medicine.

David is currently working on various open scale sculptures that will be revealed in the coming months. His work can be viewed at the Joburg Art Fair from 12-15 September 2019 with SMITH Gallery.